Inside the ‘zombie mansion’: Eerie photos show dilapidated 250-year-old house that has been abandoned since its millionaire owner died and used as a setting for role-playing combat games

Creepy photos show an abandoned 250-year-old mansion used for zombie role-playing games which has been ransacked and sprayed in graffiti.

Daresbury Hall in Cheshire was once a luxurious Georgian country house which passed through the hands of wealthy landowners during the 1700s and 1800s.

Now the three-storey building has been ravaged from top to bottom, scrawled in eerie warnings and littered with food and alcohol bottles. 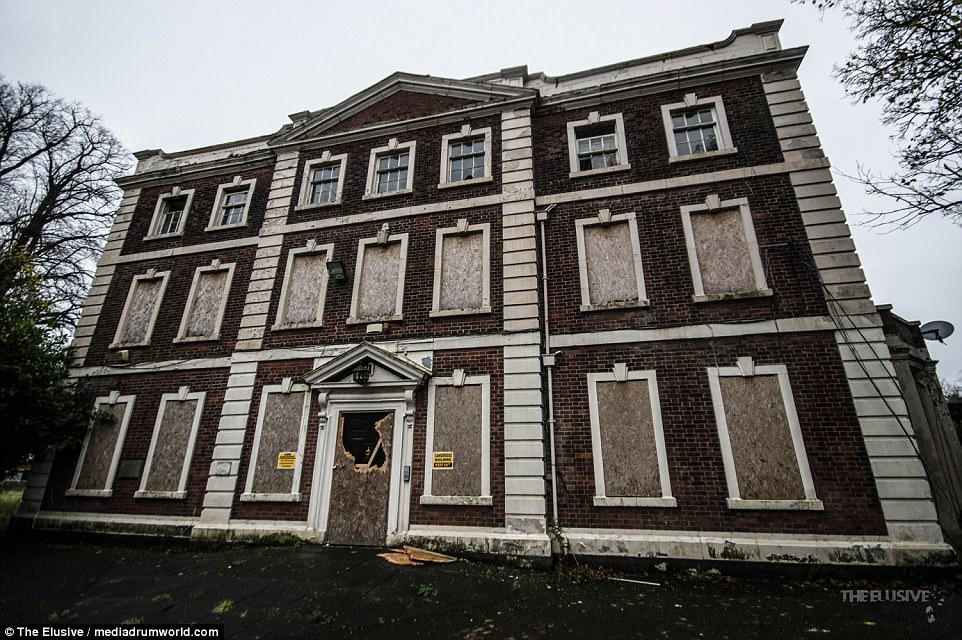 Daresbury Hall in Cheshire, which is 250 years old. It was ransacked after its millionaire owner, who intended to restore it, passed away 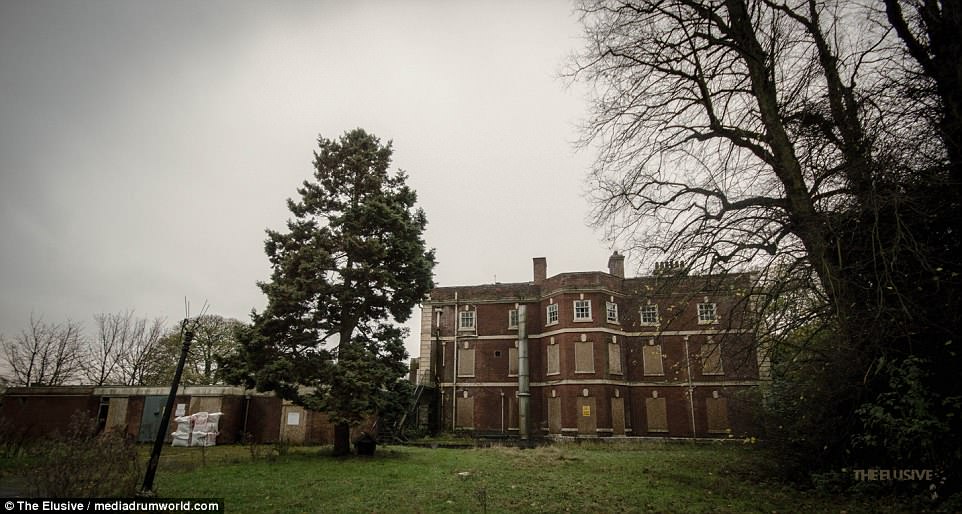 An outside view of the manor house, which is set over three storeys and has a total of 20 windows overlooking the grounds

Disturbing pictures, taken by an urban explorer known only as The Elusive, shows furniture torn apart and what looks like blood spattered up the walls.

The mansion’s latest millionaire owner had planned to restore it, but passed away. The already semi-derelict building fell into disrepair. 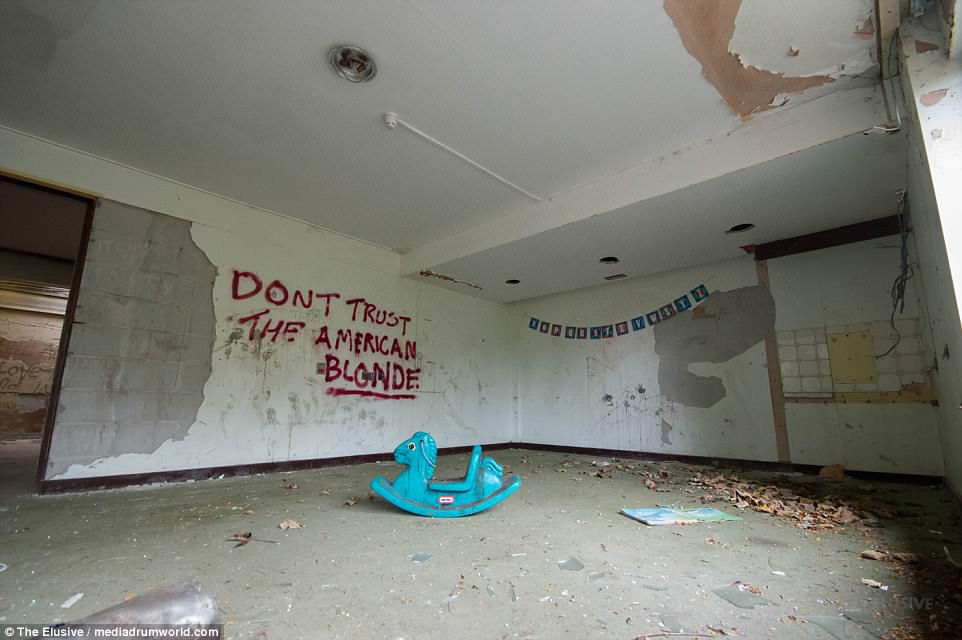 ‘Don’t trust the American blonde’: An eerie warning written in red graffiti in what appears to have been a nursery in the house. A child’s green rocking horse sits abandoned in the middle of the room and the letters of the alphabet hang on one wall 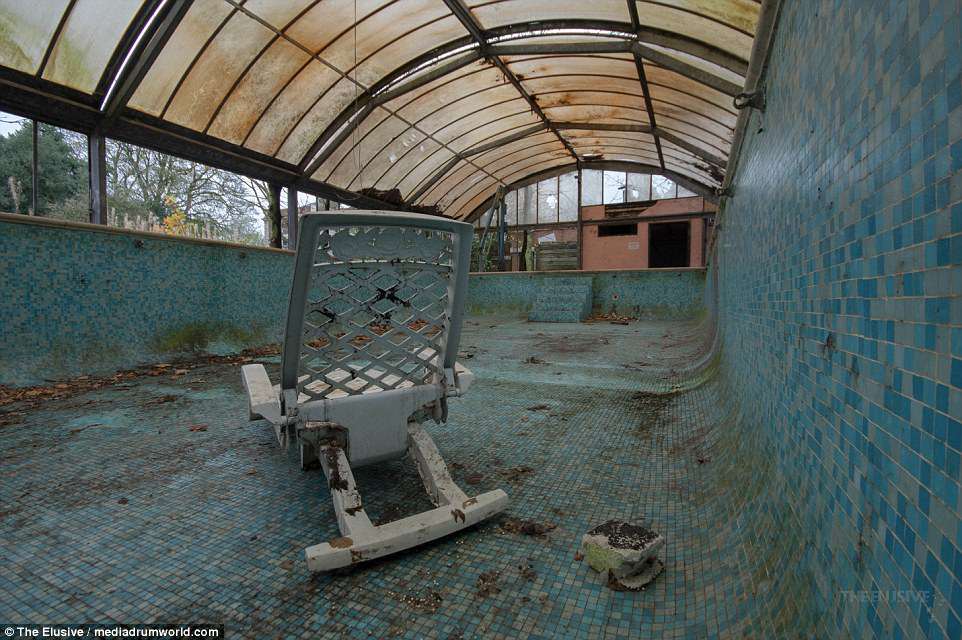 A filthy sunbed sits in an abandoned pool which is filled with leaves and mud. The glass roof overhead is so dirty the windows appear orange and opaque 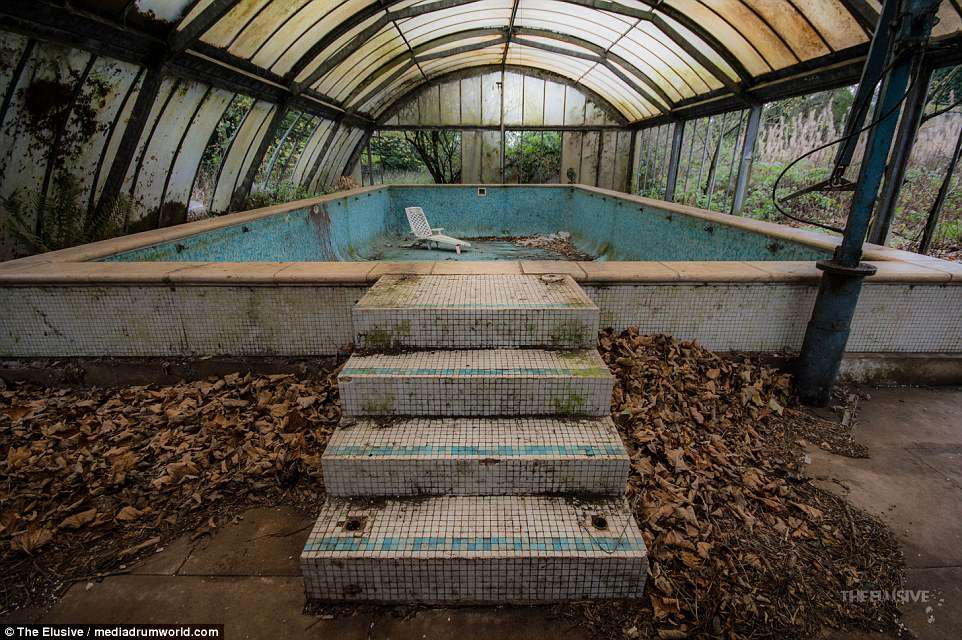 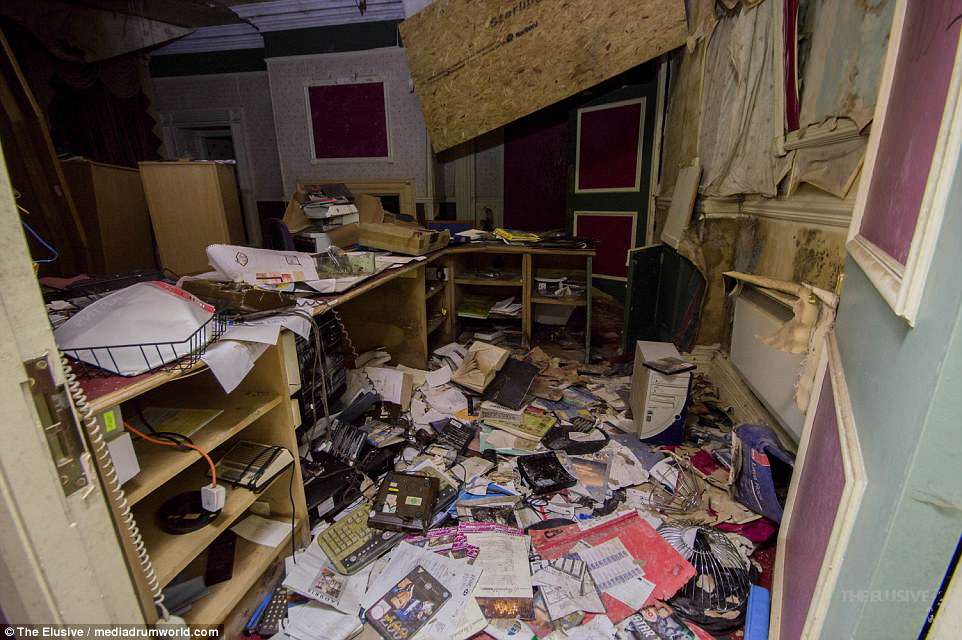 The study? Piles of clutter line fill the floor in what appears to have been an office. A telephone and keyboard can be seen buried among the rubbish scattered around the room 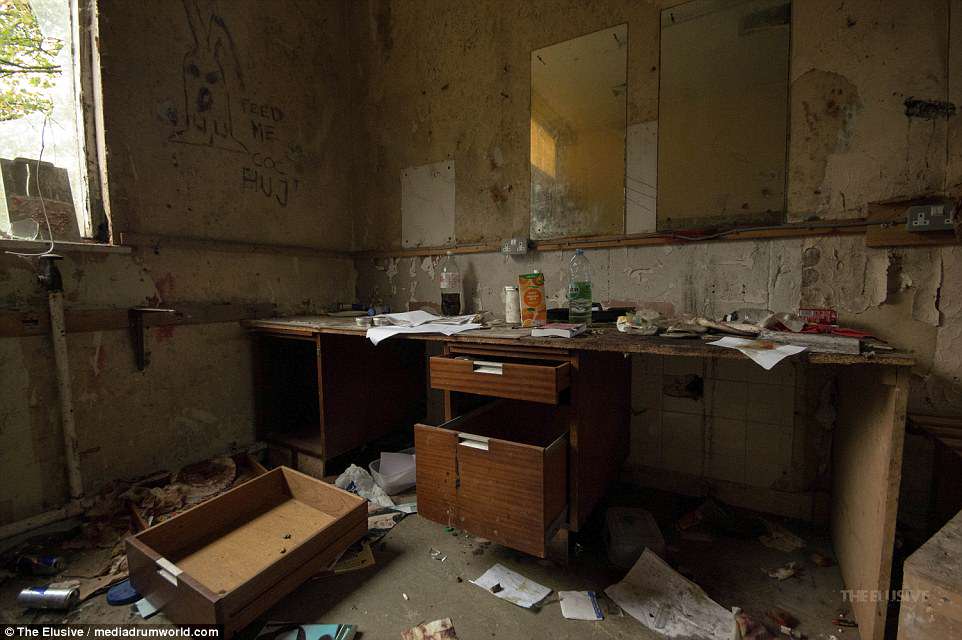 A desk in one of the rooms has been destroyed and sits covered in drinks bottles, paper and other rubbish

It was then commandeered by Zed Events who used the manor house as a location for airsoft – a competitive sport in which participants fire at each other with soft pellets.

In the zombie version of the game, competitors are thrown into mock post-apocalyptic scenarios and must try to avoid actors dressed as the living dead roaming the halls.

Daresbury Hall is recorded on the National Heritage List for England as a designated Grade II* listed building.

During the Second World War it was used as a military hospital and for some years from 1955 by a charity, now known as Scope, as a residential home for disabled people. 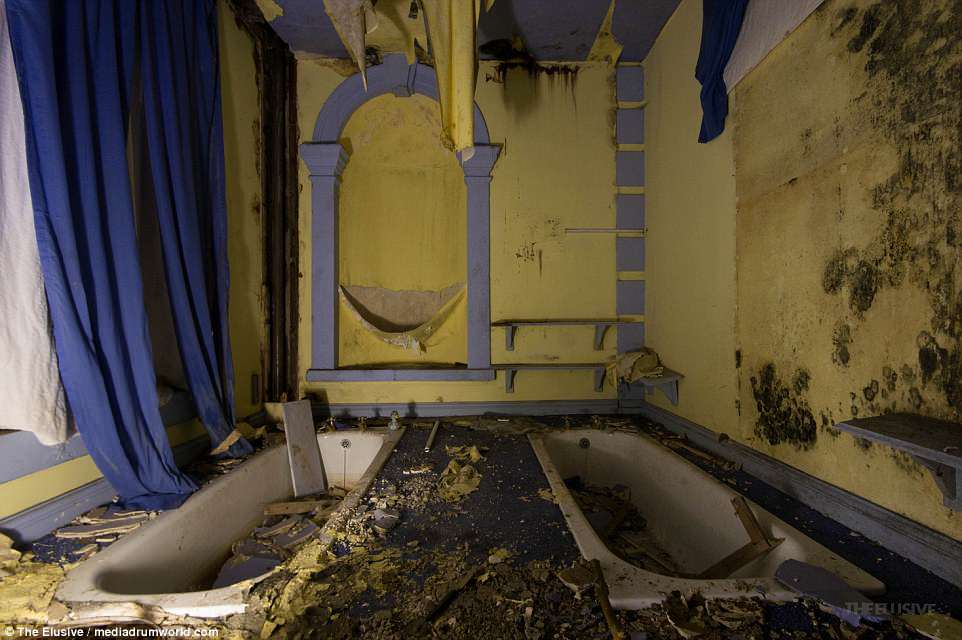 Two tubs sit side by side in the house’s filthy bathroom. The walls are yellow and covered in mould, and debris is scattered around the once luxurious boudoir 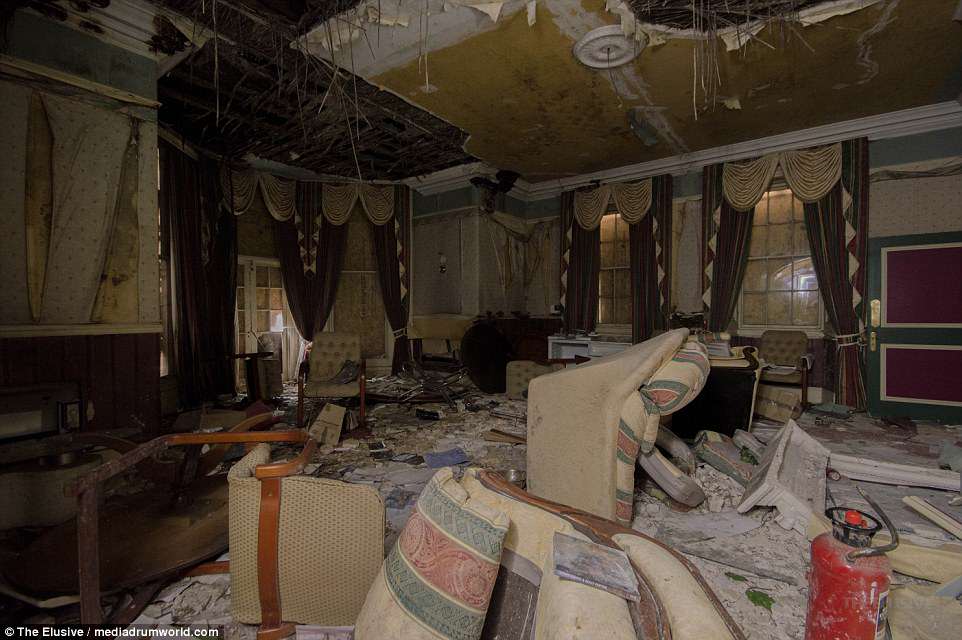 The grand hall? The main room in the house which has been ransacked during zombie role-play games. Furniture has been destroyed and even the ceiling has holes in it. A cable hangs down from the ceiling where a chandelier may have hung before 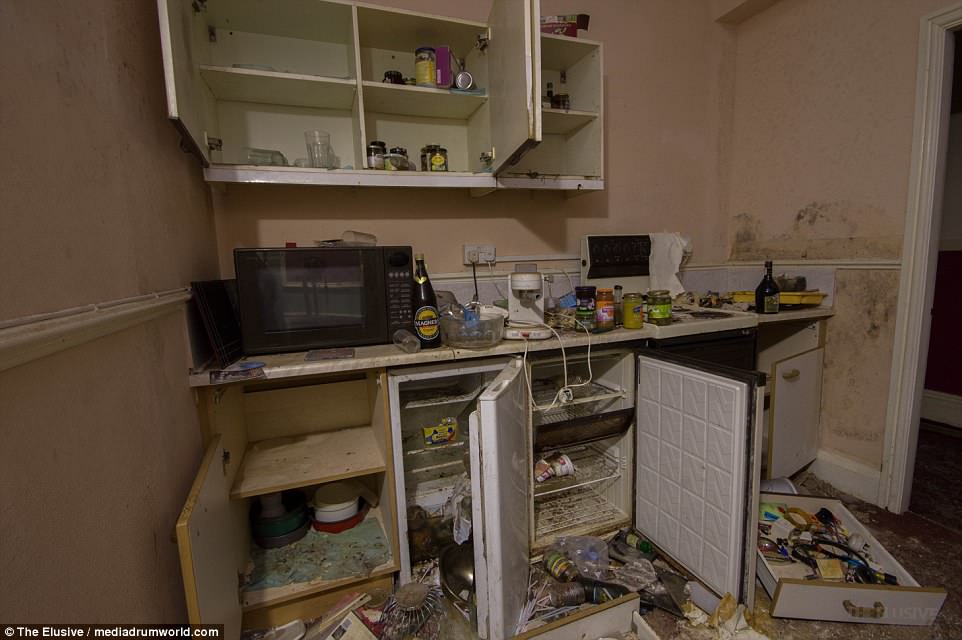 The kitchen cupboards have been ransacked and drawers ripped out. Bottles and jars line the filthy worktop. Mold can be seen creeping up the walls 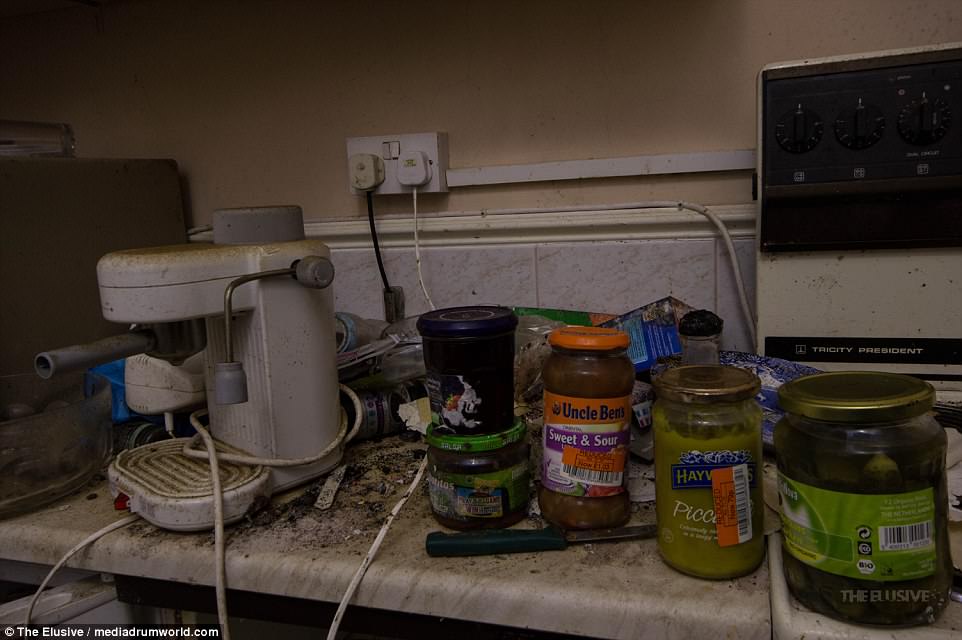 Jars of food and a broken food mixer lie abandoned in the squalid kitchen. The worktops are thick with dirt and grime

It was built in 1759 for George Heron and passed through the hands of Samuel Beckett Chadwick in 1850, Sir Gilbert Greenall in 1892 and later Baron Daresbury.

A huge cannabis farm containing six hundred plants with an estimated street value of £750,000 was discovered at the former county mansion in 2015 in an annex at the estate.

In 2016 there were plans to partly demolish and convert the house but it was badly damaged by fire the same year. 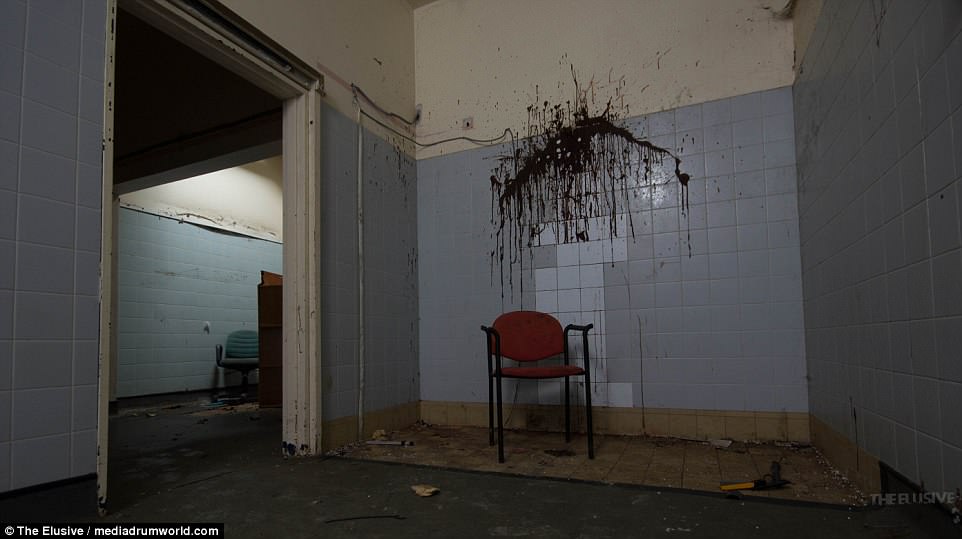 Real or fake? A deep red substance which looks like blood is splattered on the tiles of a wall in what appears to have been a shower room 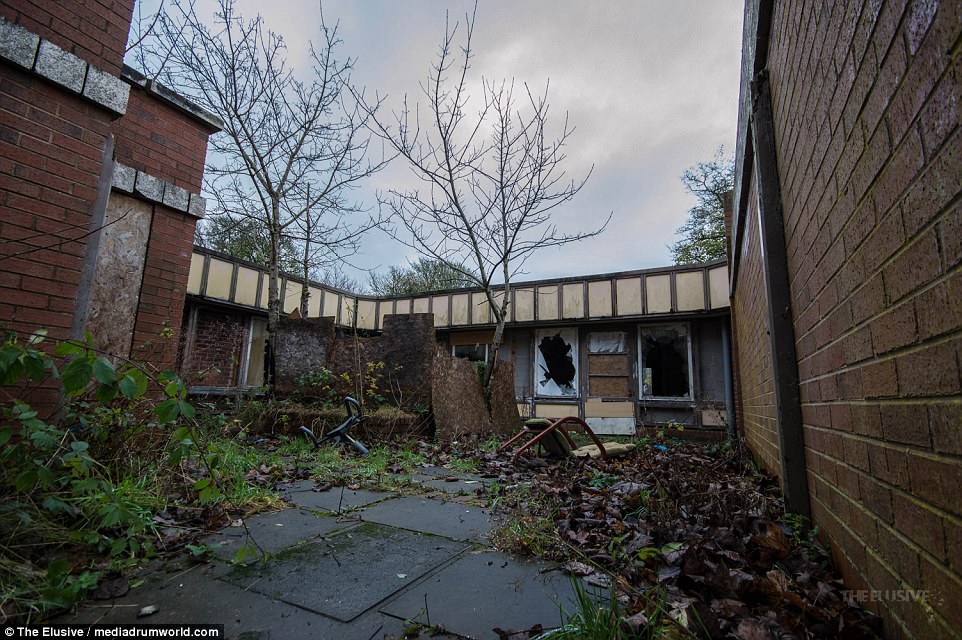 The run-down courtyard is filled with weeds, overground plants and other debris. Windows are smashed and missing around the edge 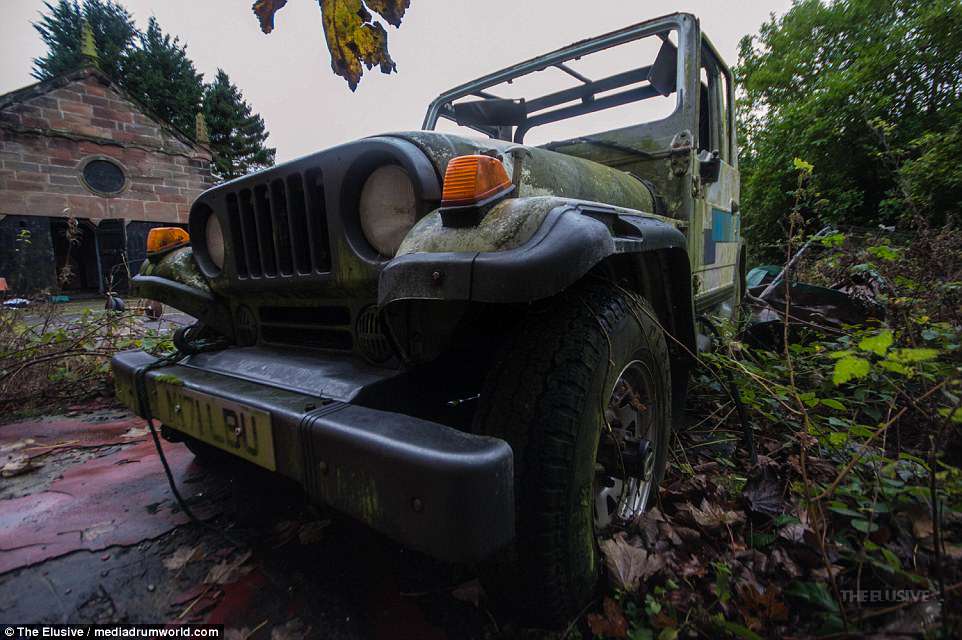 A Jeep left to rot in the grounds of the once luxurious property. Its back wheels appear to be wedged inside a thick pile of undergrowth 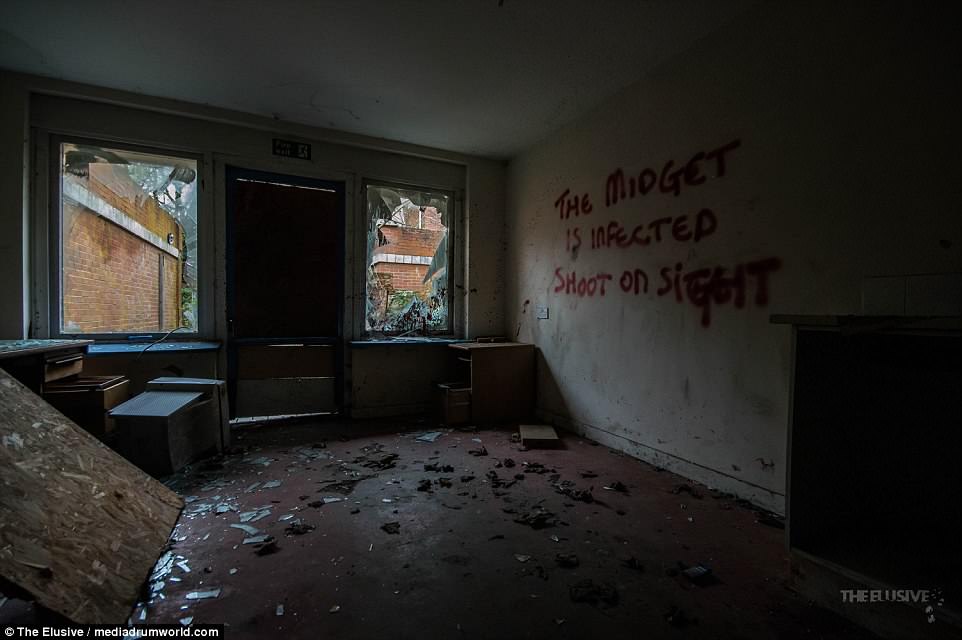 ‘The midget is infected shoot on sight’: A bizarre message scrawled on one of the walls the house. The room is filled with dirt and broken glass 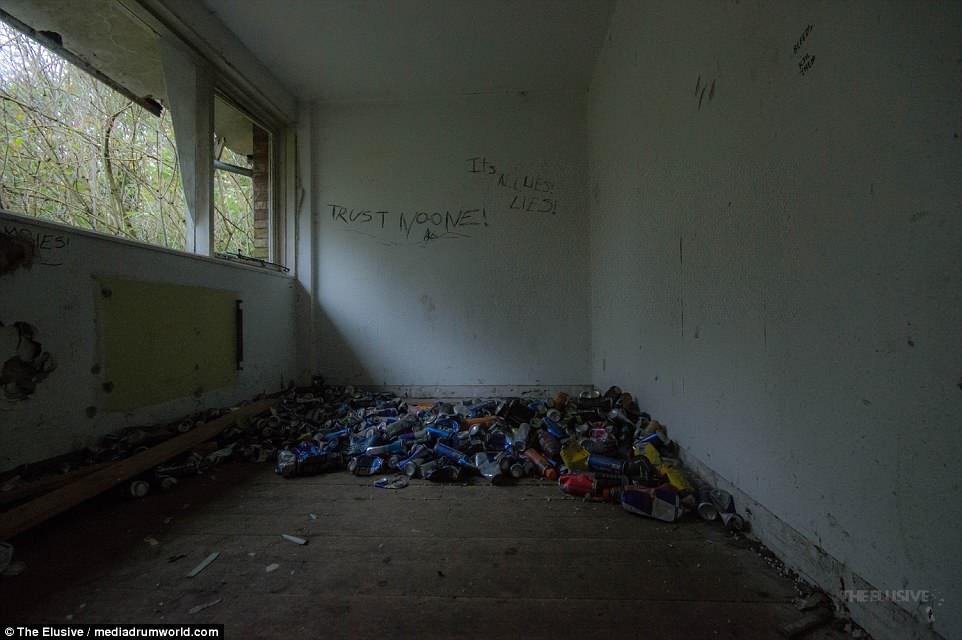 ‘Trust no one!’ One of the messages scrawled on the wall in one room, which is filled with alcohol cans and bottles 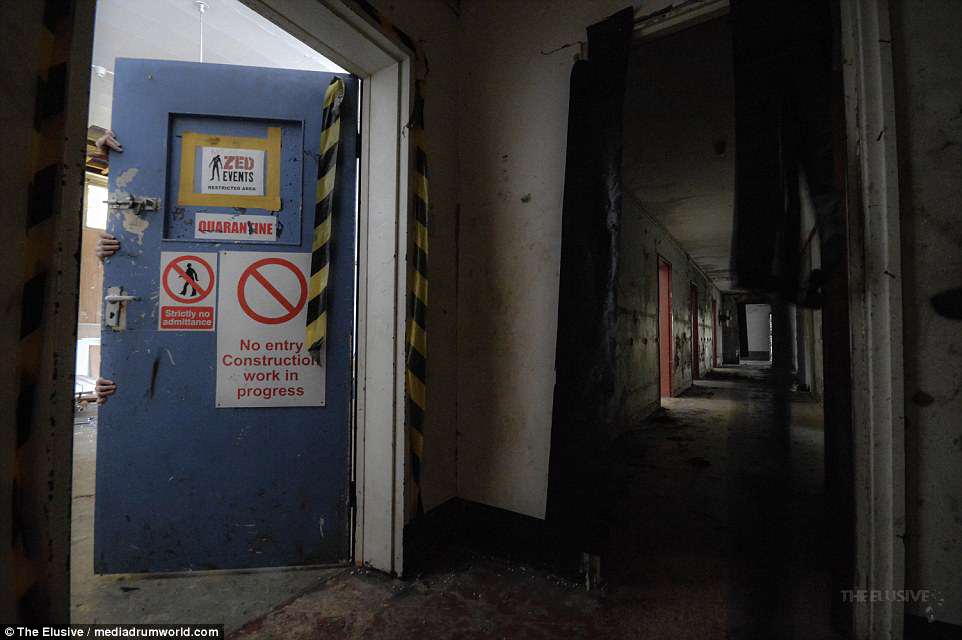 A quarantine room set up by ZED Events, who used to host their zombie role-play games in the abandoned properyt