Spooky shots reveal the derelict condition of the historic towboat that once served as President Franklin D. Roosevelt’s Mississippi River headquarters during the Second World War.

In 1942 the vessel had a special bathtub and elevator added so that President Franklin D. Roosevelt could inspect the Mississippi River in comfort.

Eerie images have revealed the abandoned remains of an historic towboat that once served as President Roosevelt’s Mississippi River headquarters in the 1940s, abandoned at Deer Park, Louisiana, 10 miles from the Mississippi 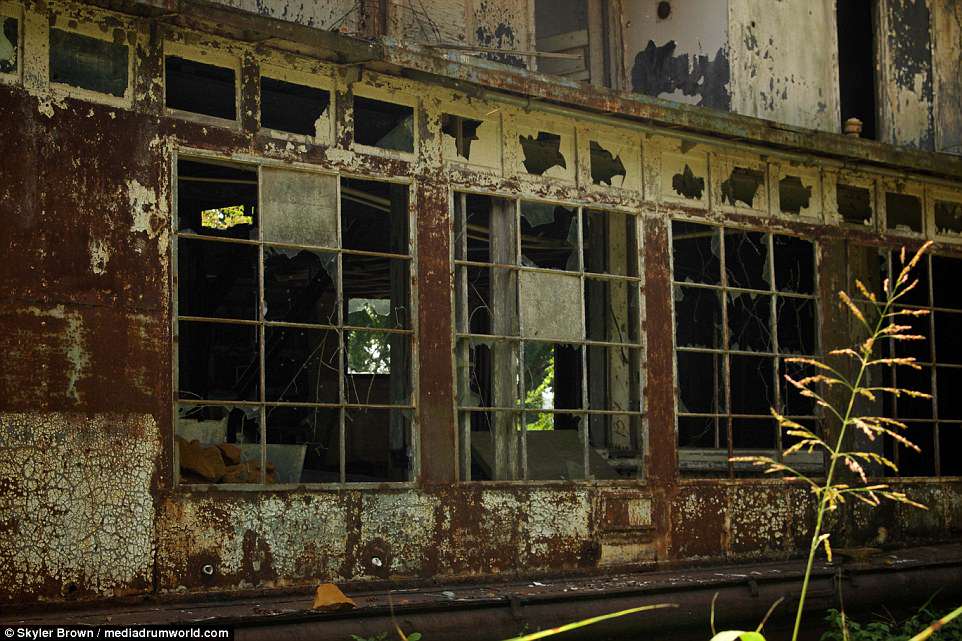 Above: the boat in its heyday. The Mamie S. Barrett is a steel-hulled sternwheel river towboat constructed with scow bow and steam engine rig. It was built in 1921 by the Howard Brothers of Jeffersonville, Indiana

Those luxurious touches are long gone, however, as this one-time-gem, a steam-powered towboat built in 1921, lies rotting after being abandoned at Deer Park, Louisiana, 10 miles from the Mississippi.

Haunting pictures show the flaking walls of the interior with the remnants of a kitchen area still visible, doors hanging off their hinges and ceilings falling down.

Other striking shots show the rusting exterior of the once-proud boat as it lies beached upon a green bank. 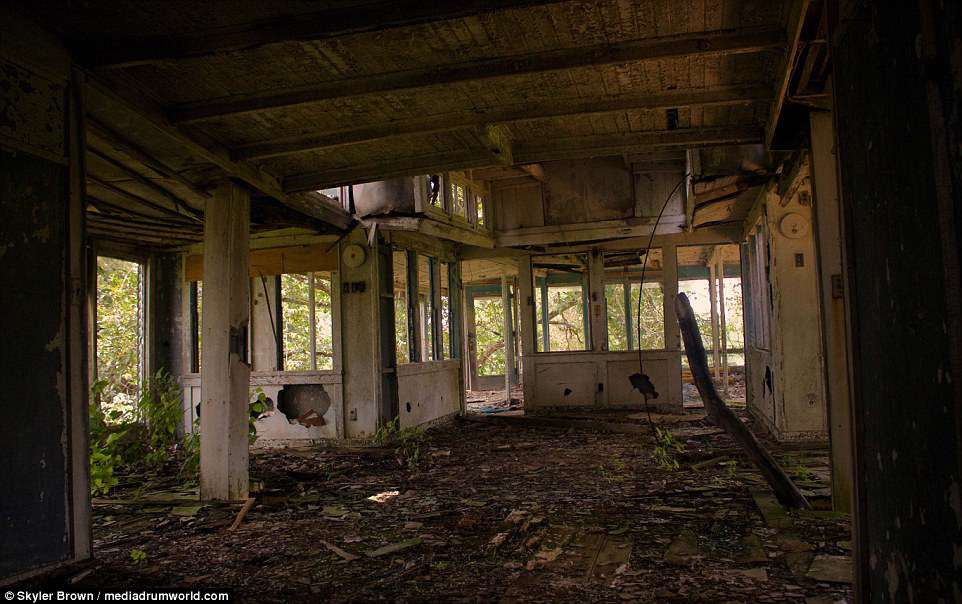 Debris covers the floor of the Mamie S. Barrett, a steamboat which was bought by the US Army Corps of Engineers in late 1923. The Barrett was designed to accommodate a crew of 11 officers and 27 men 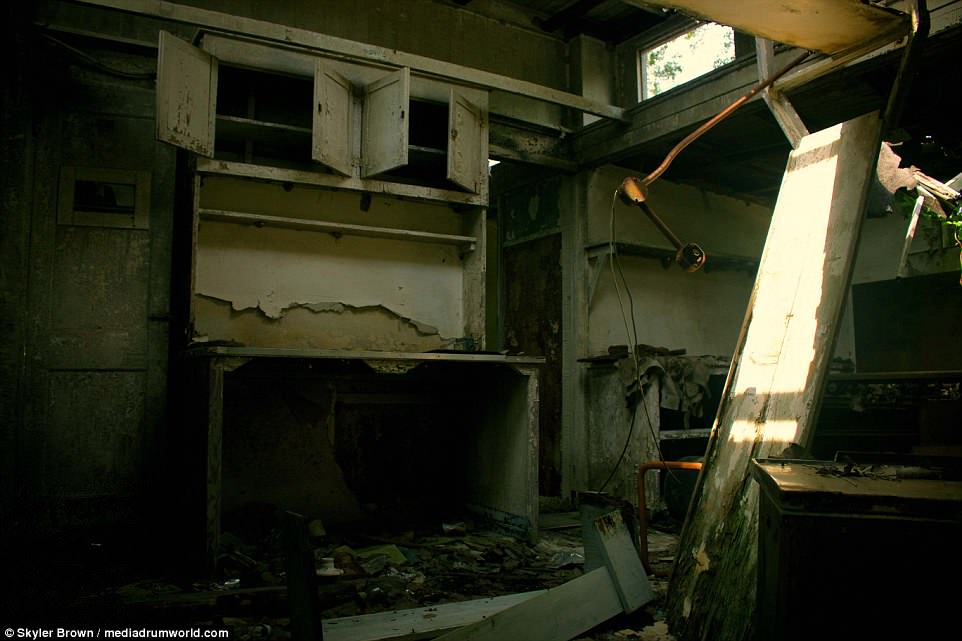 Above: peeling walls and decaying walls are evident inside the once-proud boat, which was ravaged by fire last year. It enjoyed a long and varied career on the inland river system, and underwent numerous modifications since its launching in 1921 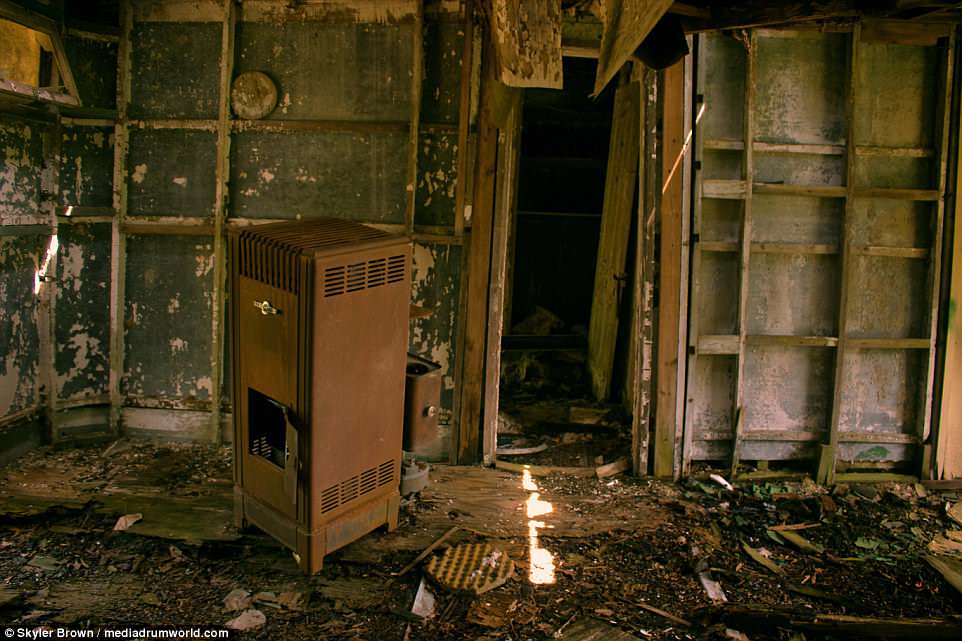 It’s not clear whether some of the equipment which can still be seen inside the decaying boat was originally part of the vessel, or has been dumped inside it, since it was left to deteriorate 10 miles from the Mississippi River

It would take a mammoth amount of money to restore this historic steamboat, which has notched up close to 100 years, to its former luxurious condition.

Originally named the Mamie S. Barrett, the US Army Corps of Engineers bought the steamboat in late 1923, two years after the 124-foot-long boat had been constructed at a cost of $145,000 (£108,000) at the Howard Shipyard in Jeffersonville, Indiana.

The vessel was used by the Army Corps for 24 years, to cruise inland waters. President Franklin D. Roosevelt would have known it as the Penniman, as it was renamed in 1935. 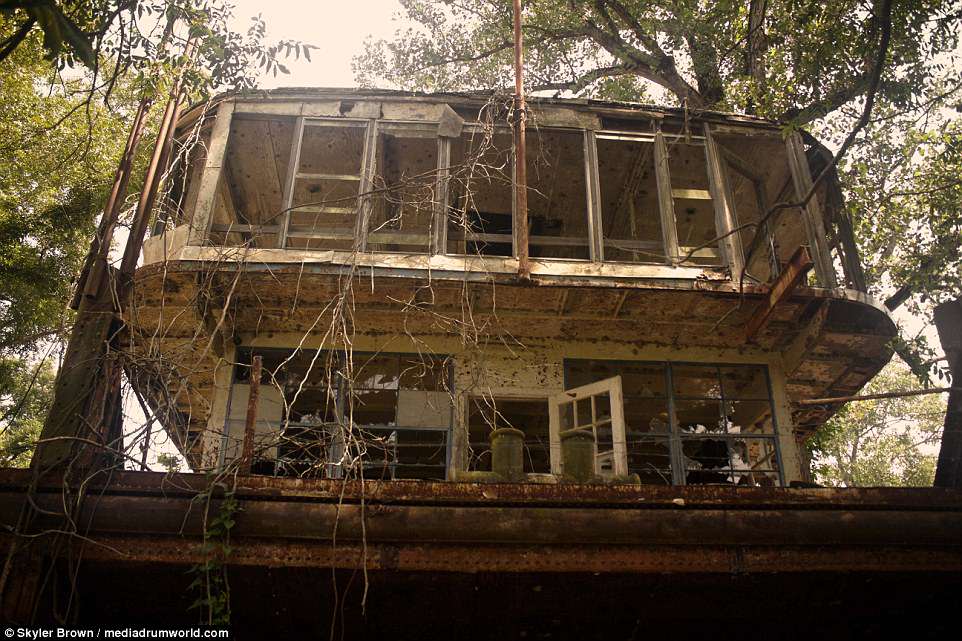 Under foliage, the former towboat and floating restaurant lies abandoned on the shore. In the 1950s the second deck was partially enclosed with wood panels and jalousie windows 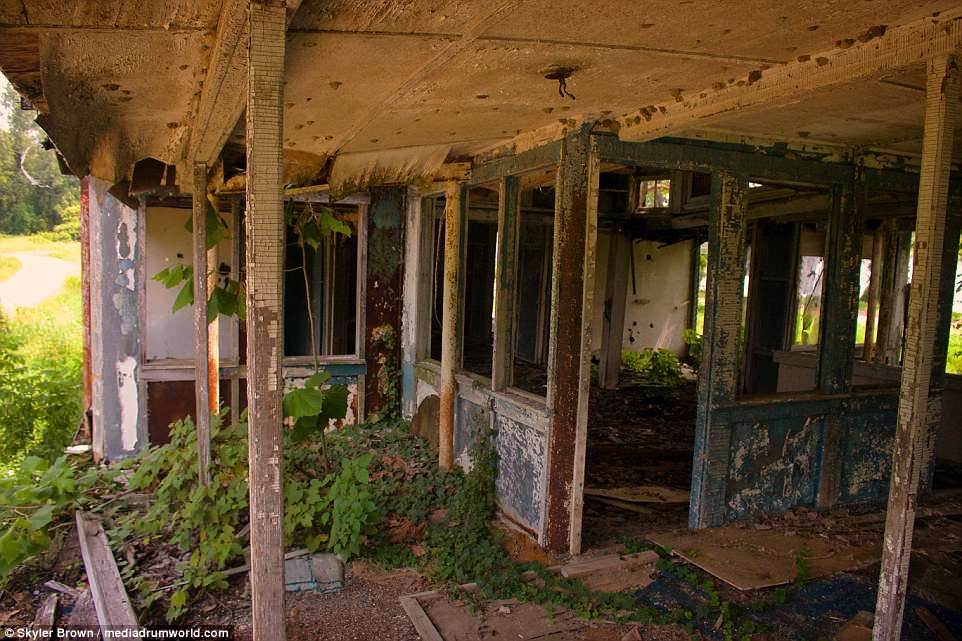 Peeling paint can be seen on the walls of the boat, which is also being overtaken by weeds at Deer Park, Louisiana. In 1981 the entire hull was filled with special foam to prevent further deterioration of the vessel. Estimates around that time indicated that over $725,000 would be needed to rehabilitate the Barrett into a first class restaurant and boutique

In 1942, the commander in chief inspected certain strategic industrial and military sites related to the war effort via the Mississippi River. But information on these trips, which included a visit to Camp Shelby, was not publicized at the time, for security reasons.

It also was employed as a towboat for hauling rock and lumber to sites for revetment work.

In 1945 the Barrett carried a group of important officials and dignitaries on an inspection tour of the Mississippi River between Minneapolis and Cairo. 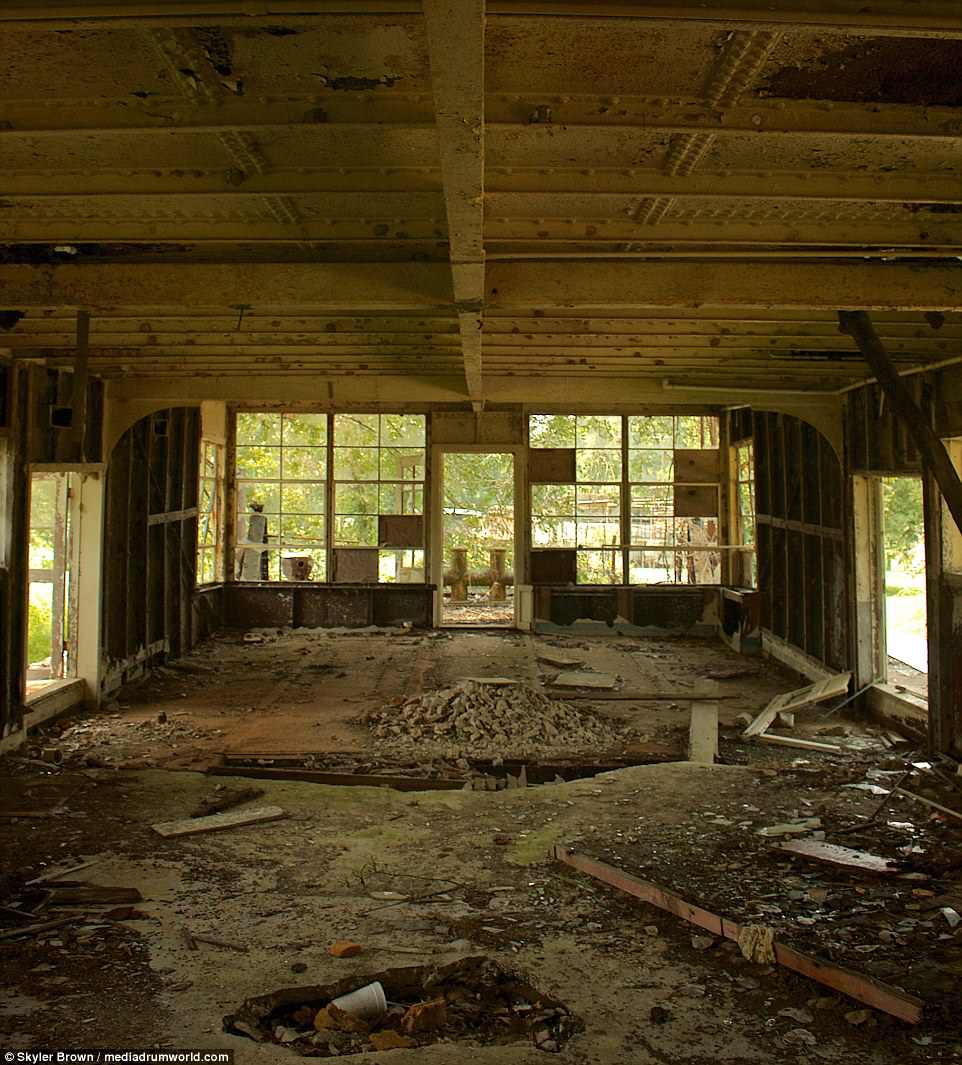 The floor is pocked with holes as the elements continue to take a toll on the derelict boat. The Mamie S. Barrett, built in 1921 as the flagship vessel for the Barrett Towboat and Barge Line Company, is significant as a rare surviving form of riverboat transportation and for its historical association with the Howard Brothers Ship Yards of Jeffersonville, Indiana 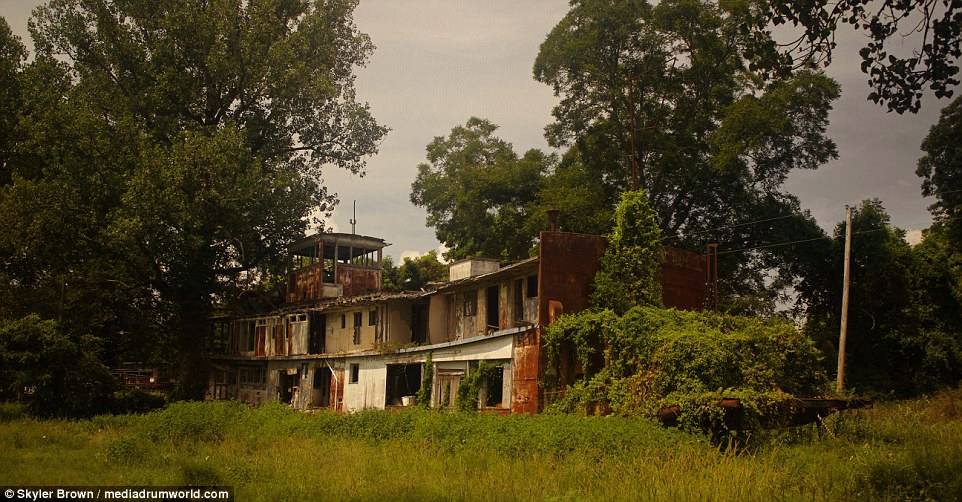 During the vessel’s relatively long period of service on the Ohio and Mississippi Rivers (1921-1949), riverboat transportation and technology underwent a period of great transition, passing from the age of steam powered sternwheelers into the modern era of propeller driven, diesel powered vessels

And before it was dumped on the shore and left to decay over 30 years ago, the vessel underwent various conversions.

The Barrett has been a floating clubhouse, restaurant and, during the 1980s, a showboat with a 120-seat theater on the main deck. The boat, which was placed on the National Register of Historic Places in 1983, was bought to be used as a casino boat three decades ago. But that never eventuated, reports steamboats.org.

In the 1990s, having survived two floods, the boat was donated to the town of Rosedale, but it had no use for the vessel. 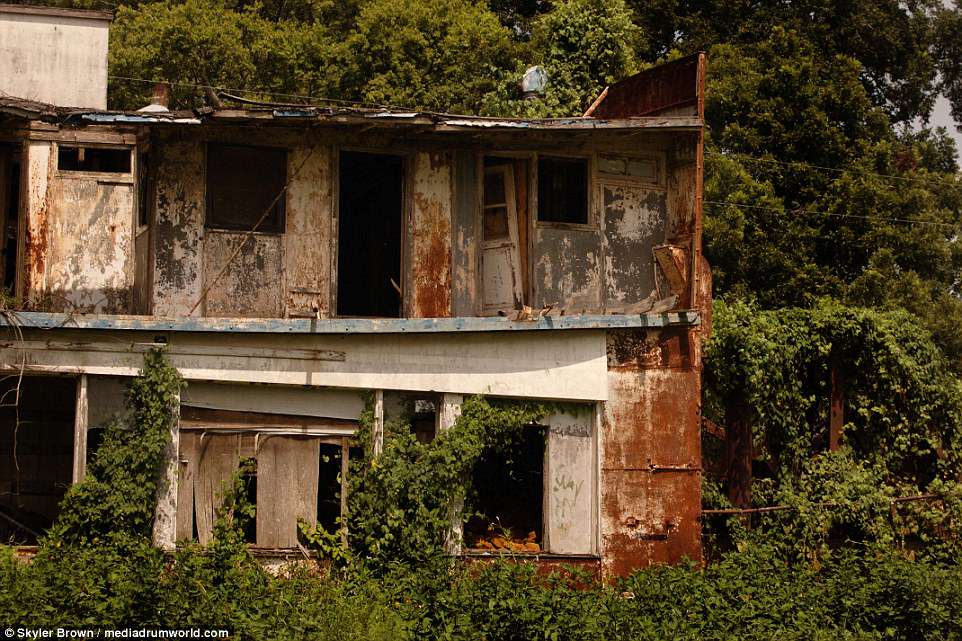 Although a substantial number of sternwheelers had been built during the nineteenth and early twentieth centuries, very few still survive 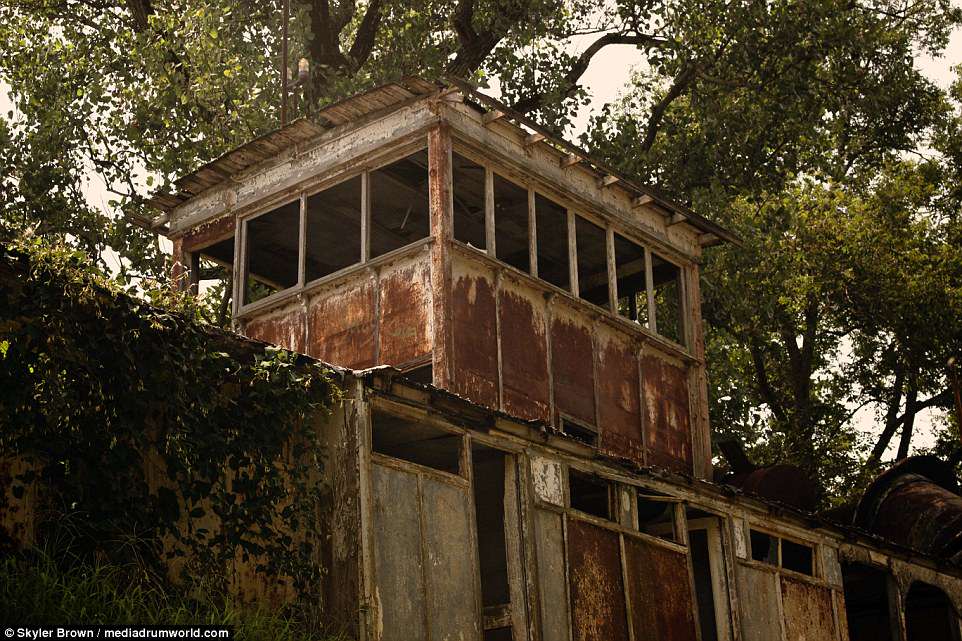 The Mamie S. Barrett was launched at the Howard Yards on August 11, 1921, making her maiden voyage to Cincinnati two weeks later in tow of the J. D. Lane

Plans to restore it have failed to materialize and last year, when the Mississippi River rose to the area it had been left to rot, the Mamie S. Barrett caught fire and was mostly destroyed.

Documenting changes since that fire in a haunting series of photos, artist and photographer Skyler Brown, of Sacramento, California, said he was drawn to the vessel after ‘hearing rumors of a large abandoned steamboat somewhere along the Mississippi River.’

‘I’ve been documenting abandoned locations around the world for several years now,’ he added.