‘I admire him’: El Chapo’s wife describes falling in love with him when she was 17 and insists he is a loving father to their twin seven-year-old daughters as prosecutors ask the jury to use ‘common sense’ and convict him during closing arguments

El Chapo’s wife has given an 11th hour interview where she paints him as a loving father and doting husband as he prepares to spend the rest of his life locked up in an American prison.

Closing arguments begin at the drug lord’s Brooklyn trial on Wednesday and will continue into Thursday before a jury retires to decide his fate.

They will deliberate 10 separate charges which include criminal enterprise, use of guns, drug money laundering and internationally distributing more than 40 tones of cocaine.

The trial, which has lasted three months, has included testimony about how El Chapo, whose real name is Joaquin Guzman, has ordered countless murders, buried people alive and run an unimaginably violent drug enterprise for decades in Mexico.

But in her interview and accompanying photo-shoot with The New York Times, his wife, Emma Coronel Aispuro, says he is nothing like the man prosecutors have painted him to be.

‘I don’t know my husband as the person they are trying to show him as. But rather I admire him as the human being that I met, and the one that I married,’ she said in Spanish.

The publication of the interview coincided with the prosecution’s closing arguments where they pleaded for the jury to use ‘common sense’ and accept the ‘avalanche’ of evidence against Guzman to put him behind bars for the rest of his life. 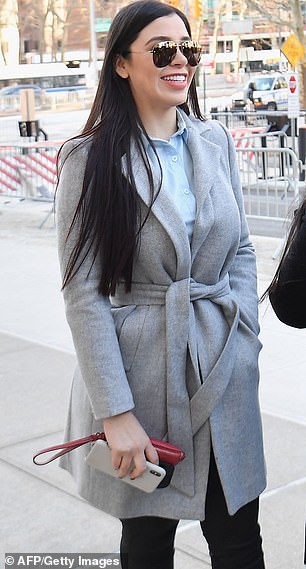 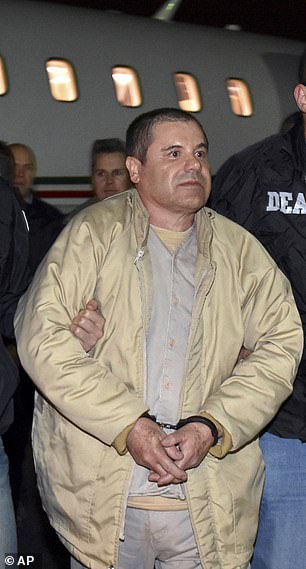 Emma Coronal Aispuro (left outside her husband’s trial on Wednesday morning) has told in an interview how they met when she was 17 and he was on the run after breaking out of prison in Mexico in 2001. He is shown, right, being extradited to the US in 2017

Assistant U.S. Attorney Andrea Goldbarg invoked the graphic testimony of one witness, who described how Guzman shot two men in the head and threw their bodies on a bonfire after beating them and swearing at them for working for a rival cartel, to make her point.

‘The cartel’s engines were corruption and violence,’ she said, adding that Guzman was able ‘to impose his will on anyone who got in his way.’

Goldbarg spent much of her closing argument walking jurors through what she called an ‘avalanche’ of evidence, including testimony by cooperators and intercepted phone calls and texts that she said made in clear that Guzman called the shots.

Of the 14 cooperators who took the witness stand, 11 testified that they took orders from the defendant, she said.

She also laid out evidence including bags of drugs and rifles, walking past it calmly to illustrate her point.

The prosecutors told jurors if they had any doubt Guzman was guilty, they should ask themselves why he acted the way he did: why he had bodyguards, hid out in the Sinaloa mountainside, had a mile-long (1.6-kilometer-long) tunnel dug to break out of prison and used spyware on his wife and two girlfriends.

‘The questions could go on and on. The answer is common sense,’ she said.

She added that the witnesses’ testimony was backed up by cell phone data and text messages written by Guzman himself.

‘These witnesses were criminals. The government is not asking you to like them.

‘[But] You know these cooperating witnesses are telling the truth because you heard the same thing from the defendant’s own mouth.

‘He’s the one who decides who lives and who dies,’ she said of the defendant.

In her interview, Coronel, who has attended every day of the proceedings, also spoke about their fiercely protected twin daughters – Emali and Maria Joaquina – and how Guzman, 61, adores them. 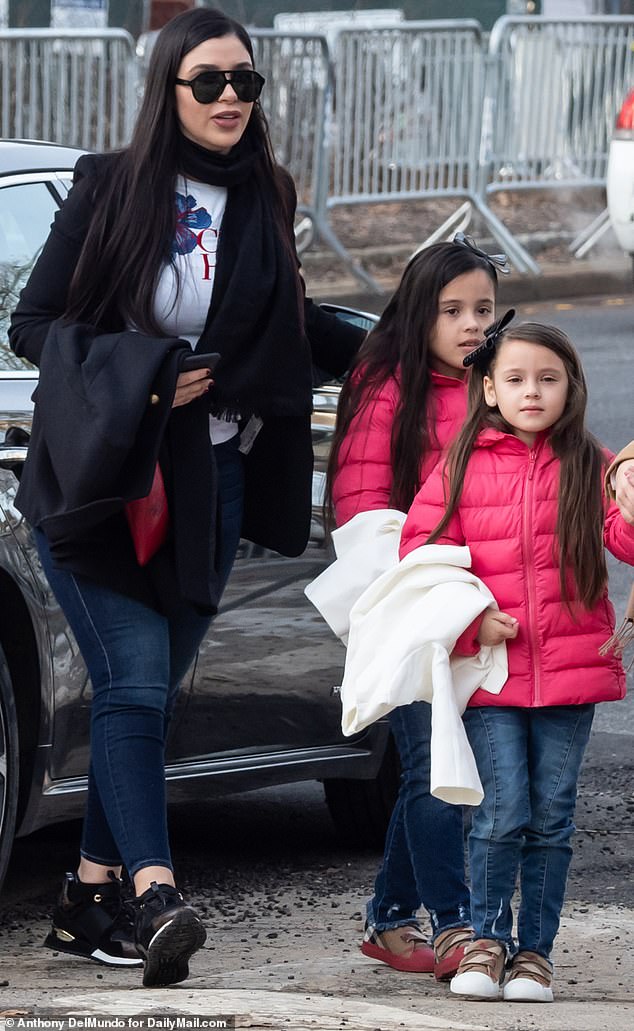 Coronel, pictured with the couple’s twin daughters,Emali and Maria Joaquina in October, said they are their father’s ‘adoration’

‘He always was a father very present to the attention of our daughters.

She and Guzman married when she was 18 in a ‘simple ceremony’. They had met a year earlier, when she was underage and he was on the after pulling off his first of two prison escapes.

He was in his 40s at the time but the age difference did nothing to stop them becoming close.

Coronel described the start of their relationship as a ‘lovely friendship’.

‘With the passing of months we became girlfriend and boyfriend. And when I turned 18 years old, we married in a very simple ceremony with family and only close friends,’ she said. She gave birth to the girls in her early 20s.

Coronel, a beauty queen, was born in California but raised in Mexico. She described her own family as ‘unified’ and spoke gushingly about her siblings.

Over the last three months, she has been in Brooklyn while her daughters are cared for in Mexico.

The girls have been the only visitors permitted to see their father in the undisclosed location where he has been held since he left the Metropolitan Correctional Center in Manhattan at the start of the trial.

They had not lived as a family for years beforehand. El Chapo broke out of prison – allegedly with his wife’s help – for a second time in 2015.

He hid out in the Sinaloa mountains until he was finally arrested in 2016. 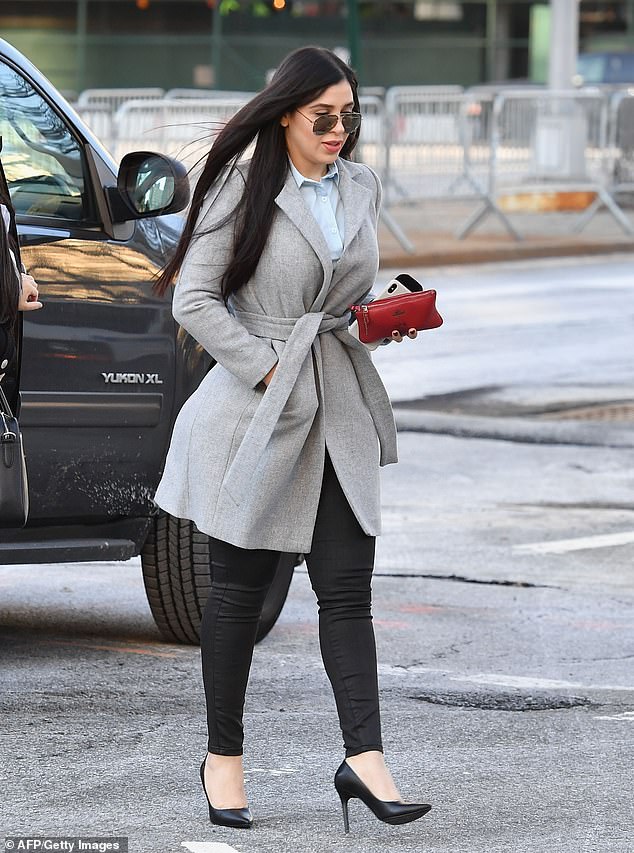 Coronel, shown outside court on Wednesday, has attended every day of her husband’s trial 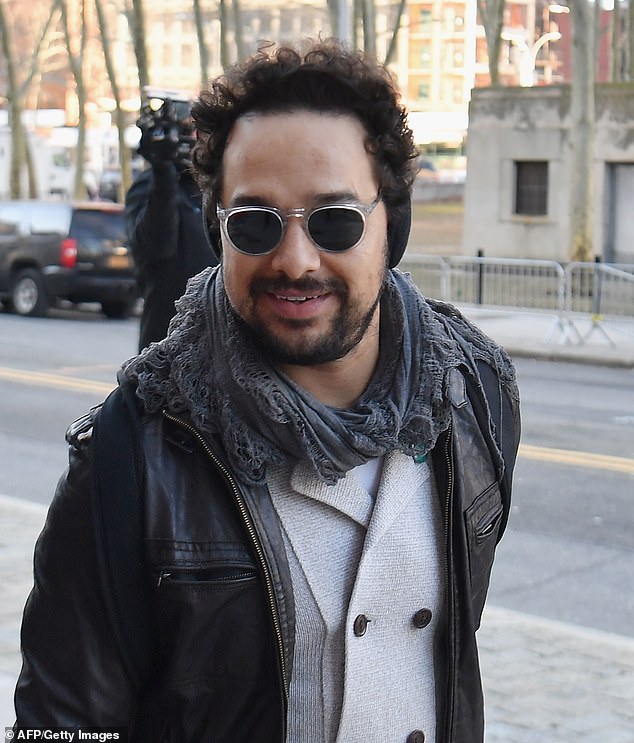 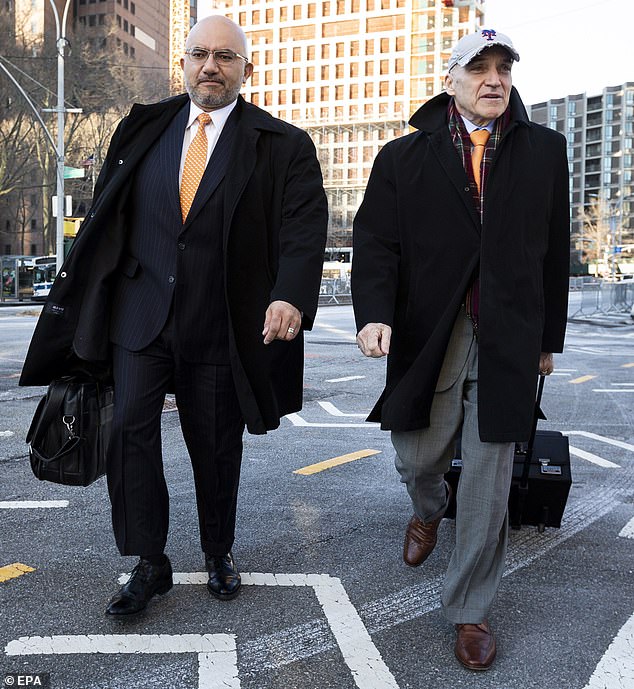 Defense attorney Angel Eduardo Balarezo and William Purpura arrive at the courthouse on Wednesday morning. The defense took just 30 minutes to make their case on Tuesday 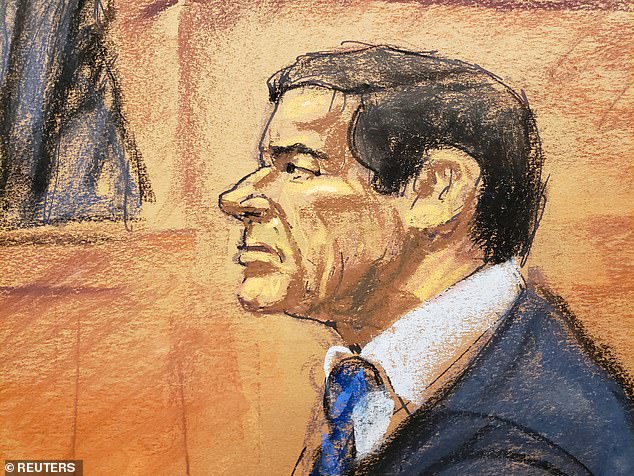 El Chapo has not been pictured since he was taken into US custody in January 2017. Cameras are not allowed in the courtroom. He is depicted above in an artist’s sketch from Monday’s proceedings

Joaquin ‘El Chapo’ Guzman was charged with 10 criminal counts, including:

Most of the counts in the indictment allege that Guzman trafficked more than 40 tons of cocaine, marijuana and heroin internationally and domestically.

He is accused of leading a continuing criminal enterprise responsible for importing into the United States and distributing massive amounts of illegal narcotics between January 1989 and December 2014.

He is also charged with using firearms in relation to his drug trafficking.

Coronel said of their prolonged separation: ‘I don’t consider myself a single mother.

‘More so, a mother who in this moment doesn’t have the support of her husband, but trusts that the family will be well.

She has spent her time in New York keeping a low profile and going to bed early most nights, she said.

Asked if she liked the nightlife in Manhattan, she said: ‘I prefer to sleep’.  She was heard ‘rejoicing’ at the end of one week because it was Friday which meant she could sleep in the following day and not have to wake up early to go to court.

El Chapo’s defense team took just 30 minutes to make their case on Tuesday before the jury was sent home for the day.

They called just one witness – a retired FBI agent who they questioned about a report he wrote on a debriefing of one of the cooperators who testified against Guzman.

On Wednesday, the prosecution, which called 50 witnesses throughout the trial, will summarize its case.

Guzman’s lawyers will give their closing arguments on Thursday before the jury is sent away.