Elon Musk sent stocks of his electric car company on a freefall on Friday after tweeting that the share price may be too high as the billionaire Tesla CEO posted a bizarre series of tweets.

‘Tesla stock price is too high imo,’ Musk tweeted at around 11:11am Eastern Time on Friday.

Right after he posted this tweet, Tesla shares began a precipitous nosedive on Wall Street.

Sure enough, Tesla shares dipped on Friday, falling more than 11 per cent and trading at around $693 as of the afternoon.

Fans of the Tesla CEO are worried and confused on Friday after he posted a series of incoherent tweets that included misquoted lyrics of The Star Spangled Banner as well as a strange pledge to sell his possessions.

Musk also tweeted: ‘Now give people back their FREEDOM.’ 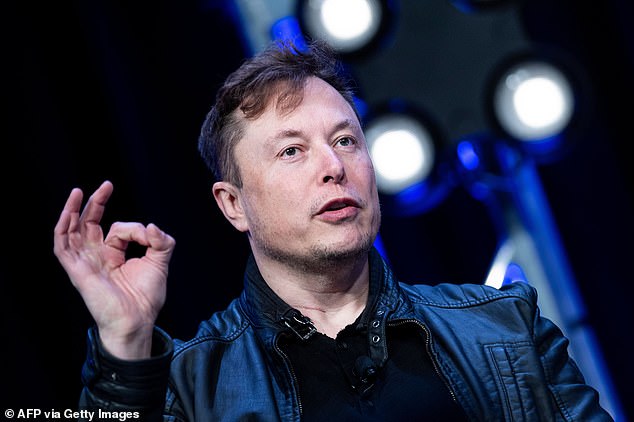 That tweet is likely a reference to Musk’s controversial comments slamming the coronavirus lockdown, which he called ‘fascist’ on Wednesday.

The tech entrepreneur also tweeted that he intends to sell ‘almost all physical possessions.’

‘Will own no house,’ Musk tweeted. He then remarked: ‘Just one stipulation on sale: I own Gene Wilder’s old house.

‘It cannot be torn down or lose any its soul.’

That property once belonged to Wilder, the late Willy Wonka actor who died in 2016. Musk has since turned the property into a private school.

The home is one of six that Musk bought within walking distance of each other.

In total, he has spent more than $100million for seven properties since 2012, according to The Wall Street Journal.

Musk then remarked on Twitter that his girlfriend, the musician Grimes, was made at him.

In response to another Twitter user, Musk revealed that Grimes, who is pregnant, is due to give birth on Monday.

Musk also attempted to recite the Star Spangled Banner, tweeting: ‘And the rocket’s red glare, the bombs bursting in air…gave proof through the night that our flag was still there…Oh, say does that star-spangled banner yet wave…O’er the land of the free and the home of the brave?’

He then tweeted: ‘Rage, rage against the dying of the light of consciousness.’

In recent days, Musk has vented over the ongoing coronavirus lockdown.

Even though his company has reported healthy earnings, one of the biggest disruptions to Tesla has been the government-ordered shutdown of its factory in Fremont, California, which began on March 24.

Alameda County, where the factory is based, on Wednesday extended stay-at-home orders until May 31 and vehicle manufacturing is not considered an essential business that is exempt.

On a conference call on Wednesday, Musk said he did not know when they could resume production.

‘I think the people are going to be very angry about this and are very angry,’ Musk said as he went off track in the call about earnings.

‘To say that they cannot leave their house and they will be arrested if they do, this is fascist. This is not democratic, this is not freedom. Give people back their goddamn freedom!’

The strictest stay-at-home orders recommend that people only leave their homes for essential trips such as visiting the grocery store or pharmacy.

Tesla shut down the California factory just as it was ramping up production of its new electric crossover utility vehicle Model Y, which it expects to generate record demand and higher profit margins.

Tesla on Wednesday said the Model Y was already contributing profits, marking the first time in the company’s history that a new vehicle is profitable in its first quarter.

Last month, Tesla said production and deliveries of its Model Y sports utility vehicle were significantly ahead of schedule, as it delivered the highest number of vehicles in any first quarter to date, despite the outbreak.

Tesla reported that it eked out a first-quarter net profit on Wednesday.

The electric car and solar panel company said it made $16million from January through March, its third-straight profitable quarter.

Excluding items, Tesla posted a profit of $1.24 per share. Analysts had expected a loss of 36 cents per share.

Tesla shares are also up for the year after recovering from a sharp slump in March.

But Musk called the state stay-at-home order a ‘serious risk’ to the business.

‘So the expansion of the shelter in place or as frankly I would call it, forcibly imprisoning people in their homes, against all their constitutional rights, is my opinion, and breaking people’s freedoms in ways that are horrible and wrong, and not why people came to America or built this country, excuse me,’ Musk added later.

‘It’s an outrage. It will cause loss, great, great harm, but not just to Tesla, but any company. And while Tesla will weather the storm there are many small companies that will not.’

Tesla produces a fraction of the cars of its rivals but has a much larger stock market value on expectations of tremendous growth.

Musk said that while other carmakers were cutting back, Telsa was ramping up investment.

He said Tesla might announce the location of a new US factory in one to three months.

Tesla said it could not predict how quickly vehicle manufacturing and global supply chains will normalize, saying it would revisit full-year guidance for net income and cash flow when it reports current-quarter results in three months.

The company on Wednesday did not update its previous forecast of delivering half a million vehicles by the end of 2020.

Tesla said its free cash flow had been impacted by growing inventory due to coronavirus shutdowns.

The COVID-19 pandemic has disrupted demand for cars, with automakers including Tesla forced to furlough workers and close factories.

Vehicle demand in the United States has dropped as much as 80% in some hard-hit areas in March, but some analysts said sales appeared to recover slightly in the first two weeks of April.

The electric carmaker did not say when it planned to resume production at its Fremont plant.