Employers are waiting for the “green light” for workers to return to the office, with expectations the state government will announce plans to lift its work-from-home advice once children go back to school next week.

There is no mandate forcing workers to stay at home, however most big companies have adopted a wait-and-see approach before asking people to return to their desks until the government changes its advice.

“The strong recommendation that people work from home if they are able remains in place,” a government spokesperson said.

Victoria’s peak employer group is eager for workers to return to the office, but said its members were waiting for direction from the state government. 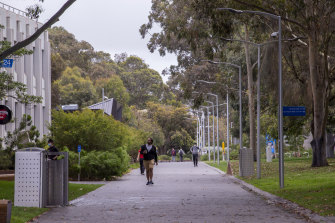 Monash University has been hit with further claims of staff underpayment. Credit:Wayne Taylor

In a sign of possible workplace disputes to come, one university is locked in a battle with its staff over allegations it did not consult them before announcing a return to face-to-face lectures.

Monash University was issued a provisional notice of improvement by staff-elected health and safety representatives following concerns that workers could be put at risk of COVID-19 by an unsafe workplace.

An employment lawyer said that employees could dispute a return to their workplace if they could prove it is unsafe, however there was nothing stopping an employer ordering people back who simply prefer being at home.

“Things like people enjoying less commuting time, that is not in and of itself a reason why an employer is obliged to provide working from home arrangements,” said Kamal Farouque, principal employment lawyer at Maurice Blackburn.

“Most employers in office-based work will make provisions for that because expectations for employees have changed – if they want to be competitive they have to offer it.”

Victorian Chamber of Commerce and Industry chief executive Paul Guerra said office workers had an appetite to return to the city and were waiting for the government to change its advice.

“As soon as the green light is given by the state government allowing them to return, we know they will come back en masse, as long as the mask mandate is removed,” he said.

“We expect to see further directions given in a couple of weeks following the return to school and seeing the impacts of these changes on our medical system.”

Rather than force workers back to the office, Mr Guerra said that management should consult with employees about return-to-work arrangements.

“There is no doubt that a hybrid model between working in the office and from home will be implemented across many companies, and we hope that the outcomes suit all those involved,” he said.

Monash University is disputing allegations it did not consult with staff and claims it communicated its plans to return to on-campus teaching in the first semester of 2022 to teachers and union representatives.

The university has eight days to act on the improvement notice, which follows concerns from the National Tertiary Education Union that staff with serious medical conditions could be at risk of contracting COVID-19 if they returned to work without additional safety measures.

The union wants Monash University to provide rapid antigen tests and N95 or KN94 masks to all staff working indoors, improved ventilation, and online teaching to remain an option for all students and staff.

Ben Eltham, the president of the union’s Monash branch, said many staff members at the university were immunocompromised, had pre-existing health conditions, or cared for vulnerable relatives.

“We have been contacted by many members in recent days concerned about the university’s plans and their personal safety,” he said.

“We all want the university to keep teaching and researching. But staff and students need to be kept safe, and the University has a legal duty to ensure that.”

A Monash University spokeswoman said the university had communicated its intentions to return to on-campus learning to the union, staff, and students, adding the notice was “invalid, unnecessary and has not been issued in accordance with requirements of the OHS legislation”.

“Monash University has and continues to be committed to staff and student safety, through the more than two years now it has been operating under pandemic conditions,” she said.

She said the university had encouraged students and staff to get their booster shot, advised people to stay home if feeling unwell and maintained social distancing measures.

Monash’s health services had also administered 5000 doses of the coronavirus vaccine to staff and students and opened up booster shot appointments to the community.

“The university has strong ventilation in its buildings and has undertaken a comprehensive assessment of all of its buildings,” she said.

She said masks would continue to be handed out in spaces where risk assessments had found there was a need to wear a face covering.