End of days for Theresa May? Countdown to Brexit vote

In one of the most important UK political moments in the post-war era, the House of Commons will vote on Tuesday on the Brexit withdrawal deal. The ballot begins perhaps the most decisive few weeks in modern UK political history as Parliament now takes much more control of the fraught process after a series of dramatic legislative amendments last week.

With the scheduled deadline for Britain to leave the EU at the end of March fast approaching, and the exceptionally weak UK government potentially on the verge of collapse, the House of Commons raised the odds last Wednesday by passing what may appear an obscure procedural amendment. In fact, it is a significant political setback for Prime Minister Theresa May inasmuch as she must present a "new" Brexit plan within three days if the vote is lost on Tuesday. 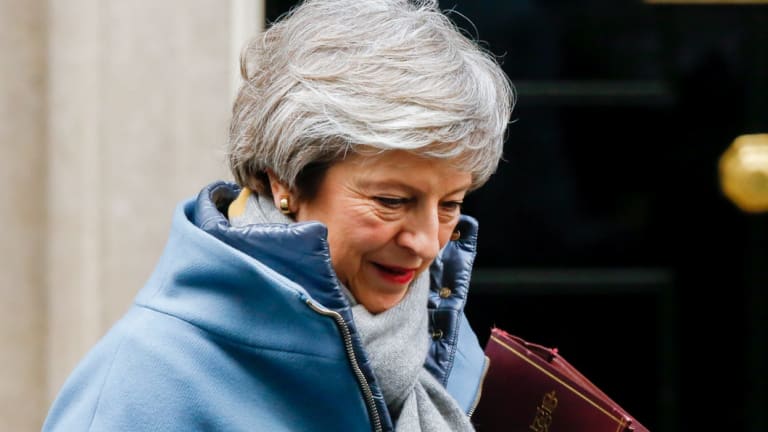 Much is likely now to hinge, politically, and for financial markets, on what the scale of May's expected loss on Tuesday will be.

At the most catastrophic end of the spectrum for May, some pundits have forecast the government could lose by about 200 votes.Such a bracing defeat could trigger the political end-game for May, who hasn't ruled out resigning if she loses. Even if she decides to stay and fight, there will be new impetus behind a House of Commons vote of "no confidence" in her, new calls for a general election, or possibly a referendum on the Brexit withdrawal deal.

Yet it is also possible that any significant financial market volatility could sway the minds of more MPs to support her plan in a second vote. A parallel here might be the Troubled Asset Relief Program legislation in the United States in 2008, which was a key component of the then Bush administration’s measures to address the US sub-prime mortgage crisis.

The legislation was initially defeated in a vote in Congress. However, it was passed on the second attempt soon afterward after markets tanked.

A rosier scenario for May, which would not just bolster her position, but potentially move markets, would be a significantly narrower than anticipated loss, or the extremely narrow possibility of a win. The latter currently appears most unlikely, but nothing can be ruled out in the febrile environment of Westminster politics.

If May does lose, and chooses to stay to fight, she may well urgently seek to reach out to fellow European presidents and prime ministers to get further Brexit withdrawal concessions. While EU leaders have said there is no scope for further negotiation on the deal, there could yet be overwhelming incentives for both sides to try to get the agreement over the line.

One further consequence of a government defeat on Tuesday, which is driving Parliament's move to take back control in the face of the May team's incompetence, will be for both sides to expedite no-deal preparations. It is that no-deal scenario that particularly worries many MPs who are now seeking to tie the government’s hands to try to prevent that outcome.

On Tuesday, for instance, the government suffered a significant defeat on the finance bill. Here a cross-party group of MPs passed another key amendment limiting the government’s tax administration powers in the event of the United Kingdom leaving the EU without a deal.

In the maelstrom of Tuesday’s vote, one of the few certainties is the continuing disagreement within UK political elites over Brexit, more than two years after the referendum. As the debate over May’s withdrawal deal versus other harder and softer variants of Brexit shows, this is not just a Leave versus Remain debate.

This is because even those who voted to exit the EU in 2016 did so for diverse and sometimes divergent reasons which makes fashioning support for a withdrawal agreement very difficult. Some Leave voters, for instance, of an isolationist bent focused on perceived costs and constraints of EU membership perceived to limit UK sovereignty on issues such as migration. Meanwhile, a significant slice of the electorate voted to exit as a protest against non-EU issues such as the domestic austerity measures implemented by UK governments since the 2008-09 financial crisis.

However, other Leavers voted in 2016 for an alternative vision of a buccaneering global United Kingdom that could, post-Brexit, allow the nation to secure enhanced political and economic ties with countries outside of the EU. It is many of these people – who favour more, not less international engagement – who now want to see, for instance, new trade deals with key Asian markets such as China and India, the Gulf Co-operation states and mature markets such as the United States, Canada, and Australia.

And the continuing divisions within the wider electorate on these issues are underlined in polls too. These now generally show more people favouring EU membership than not, and the country split over whether maintaining access to the European Single Market, or being able to limit migration, should be the key objective of Brexit.

Taken overall, May is now besieged on multiple fronts, and it would be a sensational result were she to win on Tuesday. With the nation still divided on Brexit, a heavy defeat will inject a new element of uncertainty into UK politics which, with Parliament now becoming centre stage in the process, could yet see her ousted from power; a suspension of the Article 50 process; an EU withdrawal deal referendum, and/or a General Election in short order.

Andrew Hammond is an Associate at LSE IDEAS at the London School of Economics.