Pupils will be required to wear masks in secondary schools under new government guidance expected today.

The measures are likely to suggest face coverings are worn when moving between lessons and when entering communal areas.

Both staff and pupils could have to wear masks and adhere to the new regulations.

The government guidelines are expected to bring English schools more in line with their Scottish counterparts who have been under stricter covid restricitons for several weeks.

Under current rules, wearing masks is encouraged but is down to the discretion of the individual schools. 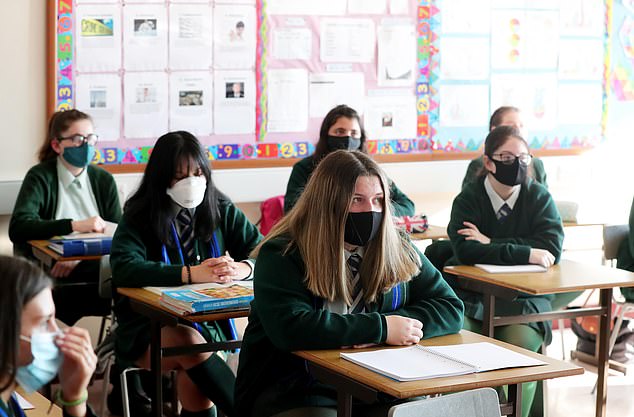 Secondary school pupils in England could be required to wear masks as they move between classrooms, like pupils in Scotland are currently required to do (Pictured: file photo of pupils in Northern Ireland) 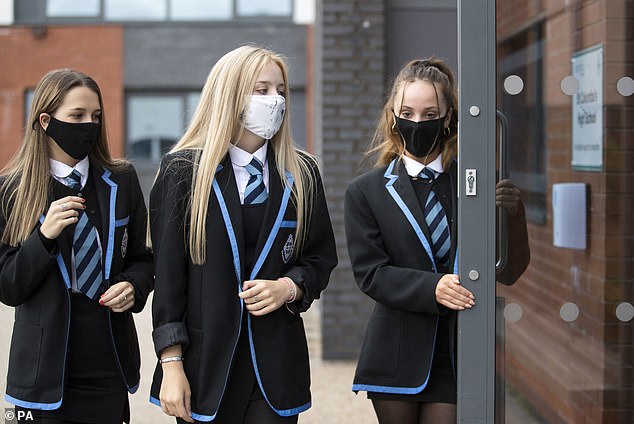 Schools in high risk areas around England are currently already asking pupils and staff to wear masks as they move around the school, but this could be introduced for all schools under new guidelines set to be released by the government today

Those in high risk areas are currently already asking pupils and staff to wear masks as they move around the school.

Julie McCulloch, director of policy at theAssociation of School and College Leaders, told The Times: ‘Lockdown obviously begs the question of whether the whole country is now viewes as high risk, and if the policy on face coverings needs to be adjusted accordinly.’

The National Teaching Union are set to launch a new ‘escalation app’ for teachers.

The app would show teachers how to navigate safety in the workplace to and how to escalate their covid safety concerns.

Most complaints can be handled within the school, the union reports, but the app would also show staff how to take their complaints higher to external bodies.

This could lead to the closure of schools if strike action is encouraged.

The union has previously called for schools to close in light of rising coronavirus cases as it fears schools are not safe for pupils and staff.

Kevin Courtney, joint general secretary of the union, told The Times: ‘For as long as schools and colleges remain open, they have to be as safe a working and learning environment as possible.

‘Our members and reps have worked with school and college leaders during this difficult time, and the proportion of settings which fully opened in September is a testament to that.

‘But it is also the case that standards can slip and new issues emerge’.

The government guidelines, expected later today according to The Times, are set to be another shake up for the education system.

The sector had to make major readjustments to reopen in September, and did so against the wishes of some teaching unions and campaigners who petitioned for them to stay closed.

Pupils had up to six months away from school as the coronavirus pandemic forced the nation into lockdown in March.

When schools reopened in September they had to introduce one way walking systems and social distacing in classrooms.

This comes despite reseach showing schools are one of the lowest sites of virus transmission.

A study from the London School of Hygiene and Tropical Medicine (LSHTM) and the University of Oxford found adults living with young children had no increased risk of Covid- infection.

Hundreds of thousands of people have since signed petitions urging the government to close schools as the country enters a second lockdown.

But the government inisists they will keep them open, with chief medical officer Chris Whitty telling MPs that: ‘On balance of risk our view is firmly for children to be in school.’

He highlighted data that showed that the risk of trasnmission in primary schools is very low.

Secondary school pupils carry a greater risk of spreading the virus, but it is still very low.

It also emerged that one of the country’s largest teacing unions is launching an app for teachers to report covid safety concerns in schools.

Pints ordered by text, football at school but not at clubs, and 30 guests at funerals but only six for weddings: The odd new rules we face in the new lockdown

By JASON GROVES and CLAIRE ELLICOT FOR THE DAILY MAIL

If you’re sad about not being able to drink at your local pub during the new lockdown, there is a way to drown your sorrows at home – order your pints via post instead!

But an 11th hour U-turn means pubs can now keep some kind custom going, as long as drinkers order by phone or website.

They will not be allowed inside the premises but will be able to turn up to collect their alcohol.

The detailed second lockdown legislation revealed the curious anomalies when they were finally put out last night. 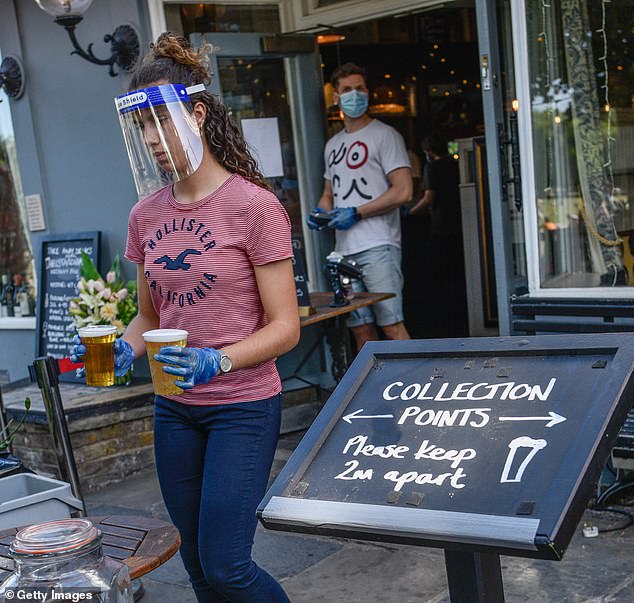 Pubs will be able to sell takeaway drinks to customers who order online or by phone, text or post (stock image used)

What are the rules for takeaway drinks from pubs?

In an 11th hour move last night, the Government decided pubs could open for takeaway drinks.

In a relaxation of the original plans expected to start tomorrow, punters will be able to collect pre-ordered alcohol – on the condition they do not enter a pub or bars’ premises.

The drink must be ordered via a website, phone or text message while venues can also deliver beverages.

Emma McClarkin, chief executive of the British Beer and Pub Association, told the BBC: ‘Takeaway alcohol from pubs if it is pre-ordered and customers don’t enter the premises is movement, but still not anywhere near enough.

‘Supermarkets and off-licences can still sell alcohol, so this is grossly unfair on pubs with off-licences. It remains the case that to help pubs and brewers survive, and to stop up to 7.5 million pints from being wasted, the government needs to give pubs the same ability to sell off-licence alcohol as it did in the first lockdown.’

What are the rules and punishments?

The complex rules, enforced by fines of up to £10,000 tripped up two Cabinet ministers yesterday.

Michael Gove was forced to apologise after wrongly suggesting people could play tennis and golf with one other person – both sports are in fact banned.

And Communities Secretary Robert Jenrick wrongly said a family could meet up with a friend in the park.

Downing Street confirmed only one adult can meet up with another adult from a different household outside unless they are in a support bubble. 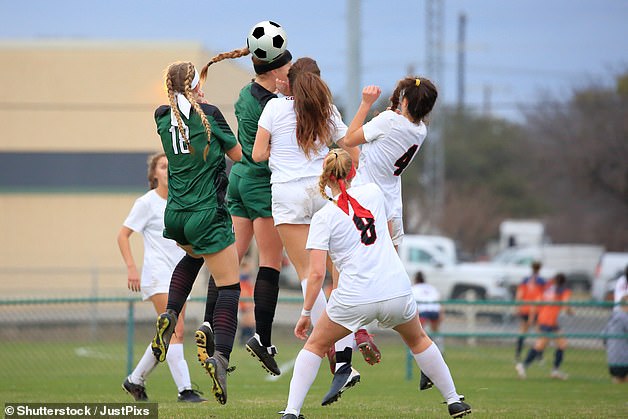 The Rules of Sups: How to get pub drinks in the second lockdown

The government has u-turned on pubs a day before the second national lockdown comes in to allow them to sell takeaway drinks.

New rules state that drinkers can order their tipple through websites, phone of text and collect at the door.

They are not allowed to go inside the premises, in the move which has been hailed by some pubs and bars.

But some were unhappy they were unable to operate in the same way shops do, with walk-up custom prohibited under the regulations.

They want the facility to be there so they can act similarly to a takeaway, which was how things operated in the first lockdown.

Emma McClarkin, chief executive of the British Beer & Pub Association said: ‘Takeaway alcohol from pubs if it is pre-ordered and customers don’t enter the premises is movement, but still not anywhere near enough.

‘Supermarkets and off-licences can still sell alcohol, so this is grossly unfair on pubs with off-licences. It remains the case that to help pubs and brewers survive, and to stop up to 7.5 million pints from being wasted, the government needs to give pubs the same ability to sell off-licence alcohol as it did in the first lockdown.’

Kate Nichols, of lobby group UK Hospitality, said: ‘It is a welcome and helpful clarification that pubs and restaurants will be permitted to continue with off-licence sales of alcohol through delivery, as well as click and collect for pre-ordered sales.

‘This was a lifeline to many businesses in the first lockdown and it is good to see common sense prevail this time too – avoiding waste and providing a valuable community service – although we can see no reason why a pub could not operate as a retail outlet for pre-packaged food and drink as many did last time.’

Although pubs and restaurants will be allowed to sell take away food, Downing Street had previously said they would be banned from selling alcoholic drinks to take away.

However, the new regulations state pubs will be able to sell drinks to takeaway customers, provided they have been ordered via a website or by telephone, text or post.

The move was welcomed last night by the Society of Independent Brewers, which said that small brewers and pubs had ‘proven their ability to trade responsibly during Covid’.

Can I go to work?

Everyone who can work from home must do so.

Those who can’t can continue going into work.

What are the rules for schools?

People are allowed to attend school, university or another place of education or training.

This also means there is scope for at-home teaching and tutoring, such as music lessons, but the government has advised a move to online teaching where possible.

Secondary school pupils and teachers in England could also be told to wear masks on the premises.

Children will be permitted to play football and other team sports at school, but banned from playing with schoolmates at local clubs.

What are the rules on sport?

Ministers faced a growing backlash over the clampdown on sport.

Pupils cannot play football and other team sports outside of school despite evidence the virus doesn’t spread well in children.

The rules prompted anger among sports figures who argue they are ‘nonsensical’ and pose a threat to children’s health.

Football pundit Robbie Savage branded the plans ‘nonsensical’ as he said there were inconsistencies in allowing children to mix during school but not while playing grassroots sports at the weekend.

And Damian Collins, who was previously chairman of the digital, culture, media and sport committee, urged the Government to reconsider its position. 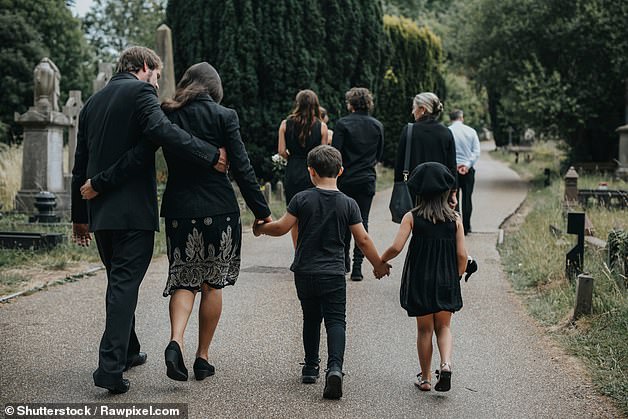 The PM’s official spokesman said: ‘Sport is permitted in school settings. In terms of outside, we do need to reduce transmission from households mixing.

‘As soon as can resume grassroots sports for children, we will.’

What are the rules on outdoor venues?

Nature lovers will be allowed to visit parks and gardens, including paid-entry venues like the Royal Horticultural Society’s gardens at Wisley in Surrey.

But they will be banned from visiting many botanical gardens and sculpture parks.

However, Kew Gardens in south-west London, said it will remain open – though its buildings, including glasshouses, will be shut.

Can I visit my second home?

People will be banned from visiting second homes unless they need to carry out work required for the potential sale or rental of the property.

What about funerals and weddings?

Funerals will be allowed to go ahead with up to 30 guests, but weddings will be limited to six people.

Can I leave the country?

No. The government is advising against all but essential international travel and only for work. However, reasons for travel will not be checked.

Travel within the country is also discouraged.