Riyadh: As Saudi Arabia considers digging a moat along its border with Qatar and dumping nuclear waste nearby, Secretary of State Mike Pompeo arrived in Riyadh on his first overseas trip as the nation's top diplomat with a simple message: Enough is enough.

Patience with what is viewed in Washington as a petulant spat within the Gulf Cooperation Council has worn thin, and Pompeo told the Saudi foreign minister, Adel al-Jubeir, that the dispute needs to end, according to a senior State Department official who briefed reporters on the meetings but who was not authorised to be named. 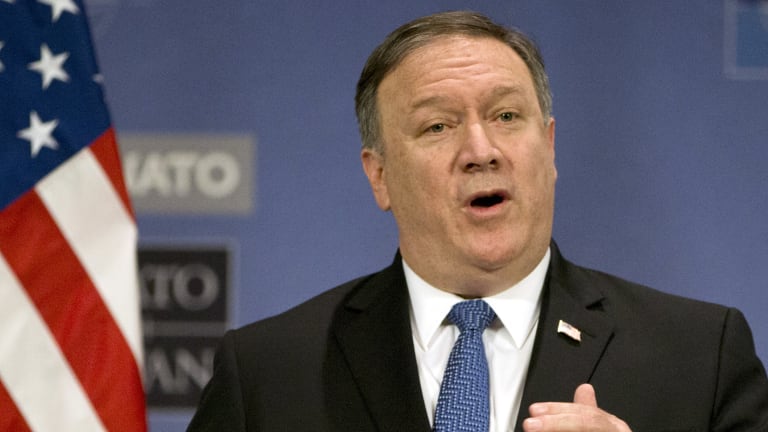 US Secretary of State Mike Pompeo is hoping to forge a united Arab approach to Iran.

In June, Saudi Arabia and the United Arab Emirates led an embargo by four Arab nations of Qatar, accusing the tiny, gas-rich nation of funding terrorism, cozying up to Iran and welcoming dissidents. Years of perceived slights on both sides of the conflict added to the bitterness.

Pompeo's predecessor, Rex Tillerson, spent much of his tenure trying to mediate the dispute, which also involved Egypt and Bahrain, but without success. The Saudis, keen observers of Washington's power dynamics, knew that Tillerson had a strained relationship with President Donald Trump and so ignored him, particularly because Trump sided with the Saudis in the early days of the dispute.

But Pompeo is closer to Trump and thus a more formidable figure. And in the nearly 11 months since the embargo began, Qatar has spent millions of dollars on a Washington charm offensive that paid off this month when its leader, Emir Tamim bin Hamad al-Thani, had an Oval Office meeting with Trump during which the president expressed strong support for the tiny country.

So Pompeo came here to deliver the same message to al-Jubeir at an airport meeting Saturday afternoon; to Crown Prince Mohammed bin Salman later that night; and to King Salman in a meeting planned for Sunday: Stop. 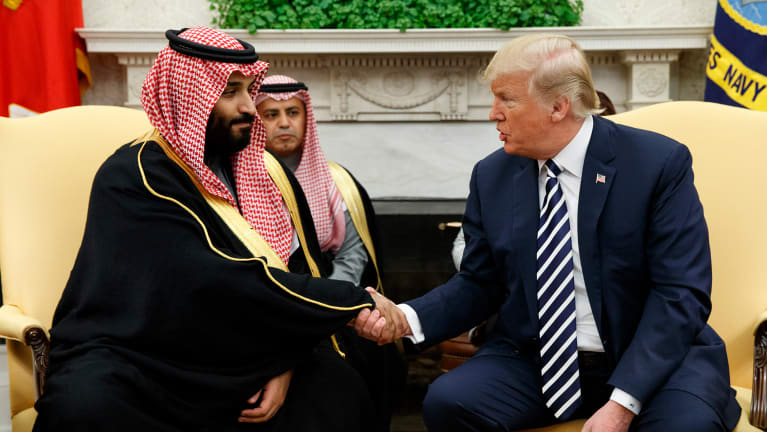 President Donald Trump with Saudi Crown Prince Mohammed bin Salman in the Oval Office of the White House in Washington in March.

Confronting Iran, stabilising Iraq and Syria, defeating the last of the Islamic State, and winding up the catastrophic civil war in Yemen are seen in Washington as increasingly urgent priorities that cannot be fully addressed without a united and more robust Arab response.

Pompeo arrived in Riyadh on the same day that Houthi forces in Yemen shot eight missiles at targets in the southern Saudi province of Jizan, killing a man. The fusillade was the latest sign that Yemen's blood bath is a growing threat to the region.

The vast humanitarian crisis in Yemen has become such a keen concern on Capitol Hill that influential senators have begun discussing restrictions on arms sales to Saudi Arabia. That would undercut other administration priorities, including an effort to increase such sales as well as attempts to get the Saudis to play a more active role in stabilising Syria and opposing Iran.

Poor targeting by the Saudis in airstrikes, as well as the kingdom's blockade of Yemeni ports, have done much to worsen the humanitarian situation in Yemen, and Pompeo told al-Jubeir on Saturday that Yemen must have easy access to humanitarian and commercial goods, along with fuel, the State Department official said. 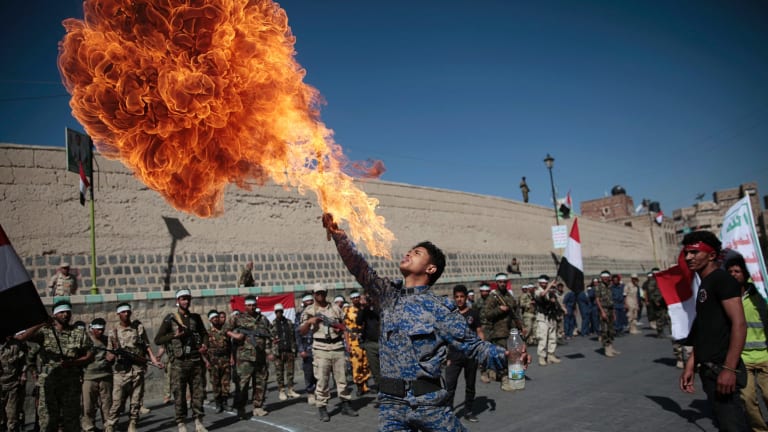 Newly recruited Houthi rebels at a parade in Sanaa, Yemen in January. The bitter civil war is becoming a barrier to solving broader problems in the Middle East.

Pompeo also came to the Middle East to discuss the Iran nuclear accord, which most observers believe Trump will rip up on May 12, his self-declared deadline for deciding on a deal he has described as "the worst ever."

On Sunday, Pompeo is scheduled to arrive in Jerusalem for talks with Prime Minister Benjamin Netanyahu of Israel, before heading to Amman, Jordan, for discussions with King Abdullah.

Trump has vowed that, regardless of what happens to the nuclear accord, Iran will not restart its nuclear program, something Iranian officials have said they may do if the United States abandons the deal. Trump has also vowed to pull US forces out of the Middle East's grinding conflict in Syria, asking other countries to bear more of the burden.

Whether the United States succeeds in persuading allies to do more there, while telling the Saudis to back down over Yemen and Qatar, is far from certain. And how the Iranians view Trump's threats while he pulls troops from Syria is also unclear.