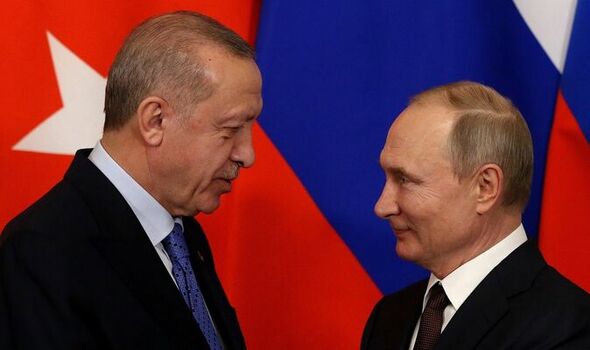 The move could clear the way for the nordic countries to join the defence alliance and help fight the threat from Russia. Finland’s Foreign Minister Pekka Haavisto said the first meeting between officials would aim to establish contacts and set goals for cooperation that the three countries agreed to by signing a memorandum of understanding at NATO’s Madrid summit at the end of June.

The two Nordic countries applied for NATO membership in response to Russia’s invasion of Ukraine, but were faced with inital opposition from Turkey.

Ankara accused them of imposing arms embargoes on them and supporting groups it deems terrorists.

But Turkey lifted its opposition to the NATO membership applications from Finland and Sweden in June. .

Finland’s foreign ministry remained tight-lipped about Friday’s meeting, refusing to reveal its location or even timing.

Mr Haavisto’s state secretary Jukka Salovaara told Finland’s public broadcaster YLE: “This is a matter of security. If we would tell where Turkey’s high officials are at which time, it would give quite a careless picture of us.”

Turkish Foreign Minister Mevlut Cavusoglu has demanded Sweden and Finland extradite suspects Turkey seeks over terrorism-related charges while the Nordic countries argue they did not agree to any specific extraditions by signing the memorandum.

The NATO membership applications from Sweden and Finland had previously faced heavy opposition from Turkey’s Government, which is led by President Recep Tayyip Erdogan.

The country’s leadership, citing concerns over the countries’ alleged support for Kurdish groups and arms exports, had been furiously against the move