Ethiopia’s government declared an immediate, unilateral cease-fire Monday in its Tigray region after nearly eight months of deadly conflict as Tigray fighters occupied the regional capital and government soldiers retreated in a region where hundreds of thousands are suffering in the world’s worst famine crisis.

The cease-fire could calm a war that has destabilized Africa’s second most populous country and threatened to do the same in the wider Horn of Africa, where Ethiopia has been seen as a key security ally for the West. It comes as the country awaits the results of national elections that Prime Minister Abiy Ahmed promoted as the centerpiece of reforms that won him the 2019 Nobel Peace Prize.

Abiy’s transformation from making peace to waging war has appalled many observers since the fighting in Tigray erupted in November. Since then, the world has struggled to access much of the region and investigate growing allegations of atrocities including gang rapes and forced starvation. Thousands of people in the region of 6 million have been killed. 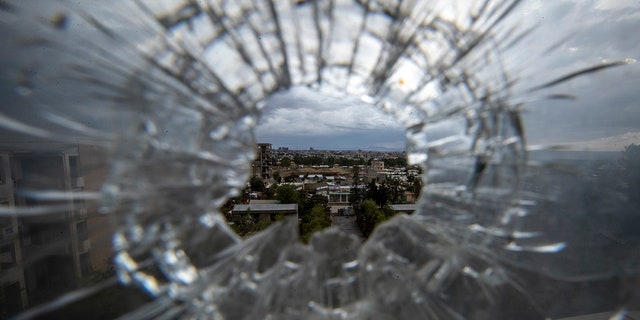 The city of Mekele is seen through a bullet hole in a stairway window of the Ayder Referral Hospital, in the Tigray region of northern Ethiopia on May 6, 2021.  (AP Photo/Ben Curtis, File)

Ethiopia’s statement was carried by state media shortly after the Tigray interim administration, appointed by the federal government, fled the regional capital, Mekele, and called for a cease-fire on humanitarian grounds so that desperately needed aid can be delivered.

U.N. Secretary-General Antonio Guterres said in a statement that he had spoken with the prime minister and “I am hopeful that an effective cessation of hostilities will take place.”

Meanwhile, Mekele residents cheered the return of Tigray forces for the first time since Ethiopian troops took the city in late November and Abiy declared victory. The Tigray fighters, loyal to the former regional ruling party that for years dominated Ethiopia’s government before being sidelined by the new prime minister, undermined the declaration by waging a guerrilla war in the region’s rough terrain.

As Tigray forces occupied the airport and other key positions in Mekele and broadcast a message telling residents to stop celebrating and go home, retreating Ethiopian soldiers shot at students at Mekele University, killing two and wounding three, said a nurse at Ayder hospital, who spoke on condition of anonymity out of fear of retaliation.

Ethnic Tigrayans, even those who didn’t support the former ruling Tigray People’s Liberation Front before the war, say they have been targeted harshly for suspected links with the Tigray fighters. Ethiopia has denied it.

But Abiy in an interview aired last week alarmed observers by recalling that aid to Tigray during Ethiopia’s devastating 1980s famine had bolstered the Tigray fighters who eventually overthrew the ruling regime. Such a thing will “never happen” now, he said.

Monday’s cease-fire declaration signaled a new approach, at least for a while.

The cease-fire “will enable farmers to till their land, aid groups to operate without any military movement around and engage with remnants (of Tigray’s former ruling party) who seek peace,” Ethiopia’s statement said, adding that efforts to bring Tigray’s former leaders “to justice” continue.

Ethiopia said the cease-fire will last until the end of the crucial planting season in Tigray. The season’s end comes in September. The government ordered all federal and regional authorities to respect the cease-fire — crucial as authorities and fighters from the neighboring Amhara region have been accused of atrocities in western Tigray.

“The government has the responsibility to find a political solution to the problem,” the head of the interim administration, Abraham Belay, said in calling for the cease-fire, adding that some elements within Tigray’s former ruling party are willing to engage with the federal government.

“If Abiy has a genuine desire to find a political solution, first he has to undo the terrorist label against the elected government of Tigray,” said Desta Haileselassie Hagos, who leads efforts to compile a list of those killed in the war. Abiy also needs to order the Eritrean soldiers to leave, he said.

Tigray in recent days has seen some of the fiercest fighting of the conflict. International pressure on Ethiopia spiked again last week after a military airstrike on a busy market killed more than 60 people, and after Doctors Without Borders said three staffers had been murdered in a separate incident.

At U.N. headquarters in New York, the United States, United Kingdom and Ireland called for an emergency open meeting of the Security Council. The U.N.’s most powerful body has discussed Tigray behind closed doors but not in an open session. They need support from nine of the 15 council members to hold an open meeting.