Michel Barnier today warned Theresa May that time is ‘short’ and she must hurry up and publish ‘workable and realistic’ Brexit proposals to get the deal done.

The EU’s chief Brexit negotiator issued the stark warning ahead of a ‘Brexit brunch’ where leaders will discuss the looming departure at talks without the PM.

Mrs May warned the bloc last night that they risk having blood on their hands if they carry out their threat to lock Britain out of intelligence sharing databases after Brexit.

But she left the tense summit at 5am this morning – leaving the other 27 member states to discuss the crunch negotiations in her absence.

Speaking in Brussels this morning, Mr Barnier blamed Britain for the lack of progress in talks saying they are waiting for a long-delayed UK white paper on the future relationship.

He said: ‘On Brexit, we have made progress but huge and serious divergence remain in particular on Ireland and Northern Ireland.’

He added: ‘We are waiting for the UK white paper and I hope it will contain workable and realistic proposal.

‘But let me mention once again that time is very short. We want a deal and are working for a deal, but time is short.’ 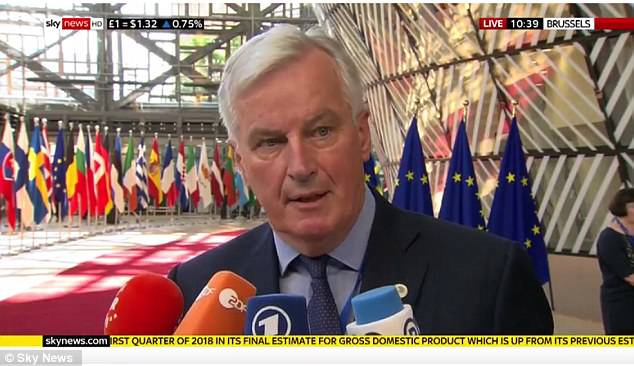 Michel Barnier (pictured today at the summit)  warned Theresa May that time is ‘short’ and she must hurry up and publish ‘workable and realistic’ Brexit proposals to get the deal done. 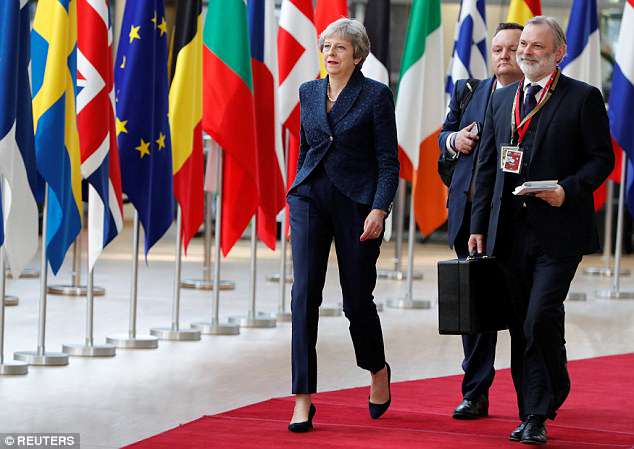 Theresa May and Britain’s Permanent Representative to the EU Tim Barrow arrive at an European Union leaders summit in Brussels on Thursday. She used the summit to tell EU leaders not to gamble with their security and lock the UK out of existing intelligence sharing programmes

As he arrived today, Mr Barnier said the EU wants an ‘ambitious partnership’ withe Britain after Brexit – but repeated his warning that Brussels will not bend its rules on free movement to get one.

The PM last night urged EU leaders to abandon their plans to treat Britain as a ‘third party’ and instead keep the close ties needed to take on the terror threat facing Europe.

The member states had been expected to thrash out their views over croissants at a Brexit breakfast, but this has been pushed back to a ‘Brexit brunch’ after stormy talks on the migration crisis ran late into the night.

Speaking to the press as she left the summit, the PM said she had been ‘stressing that we want a deal that’s going to work for the UK and for our European partners, and that if we work together, we can support each other’s prosperity and security’.

May to give flagship speech setting out Brexit blueprint

Theresa May is preparing to give another landmark Brexit speech setting out her vision for a future EU trade deal, it was today reported.

It will build on the three other major speeches she has delivered on Britain’s looming departure – given at Lancaster House, Florence and Mansion House.

In the latest set-piece, she will heed EU demands to spell out her vision for Britain’s future relationship with the bloc, The Sun reported.

The PM is gathering her warring Cabinet at hequers next week for crunch talks on Brxit.

She is hoping to get her divided ministers to finally sign up to a single Brexit plan at the meeting.

And afterward she will publish her White Paper in the future deal and deliver the speech.

She had earlier warned the leaders not to gamble with their security and pull the plug on intelligence sharing.

In a direct appeal last night, she told them: ‘I would ask you to consider what is in the best interests of the safety of your citizens and mine and give your negotiators a mandate which will allow us to achieve this crucial objective.’

The PM said the UK was committed to the future security of Europe and wanted to maintain the maximum co-operation. But she added: ‘Our ability to do so is being put at risk.

‘The existing legal frameworks for third countries will not allow us to realise the ambitious future security partnership that I believe is in all our interests.

‘Under the current position, the UK and EU would no longer be able to share information through key databases that allow our law enforcement to protect all European citizens.

‘We would no longer be able to share real-time alerts for wanted persons including serious criminals. We would be able to respond less swiftly to alerts for missing people from either side of the Channel and reunite them with their loved ones. 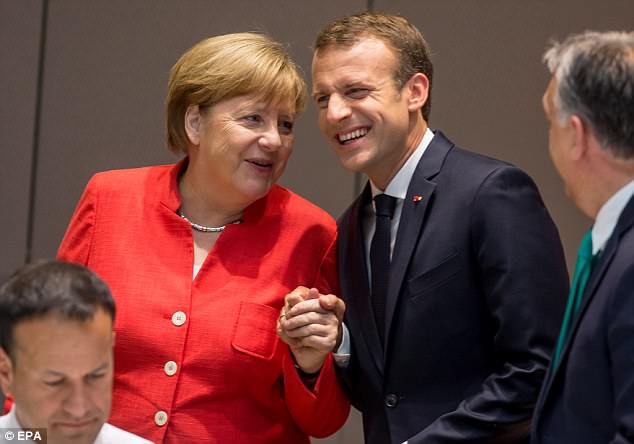 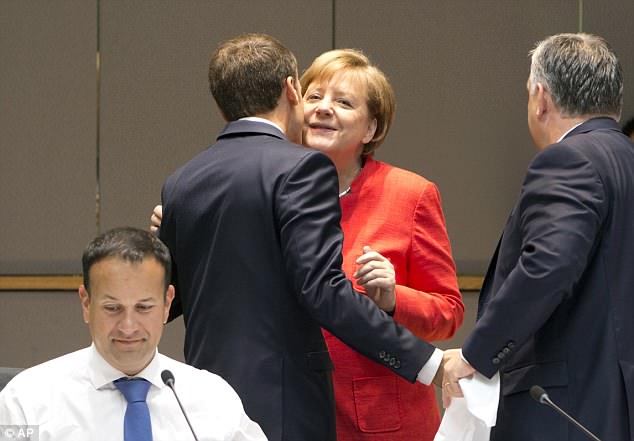 The two leaders are crucial power brokers in the negotiations, which have been stalled for months

‘And our collective ability to map terrorist networks across Europe and bring those responsible to justice would be reduced.’

The PM is under mounting pressure to finally spell out exactly what she wants Britain’s future trade deal with the Brussels bloc to look like.

She is gathering her warring Cabinet at her country retreat Chequers for an away day next week where she aims to finally thrash out a plan.

And today it was reported that she will give another flagship speech – the final in a series of four which kicked off at Lancaster House – detailing her blueprint for a future deal. 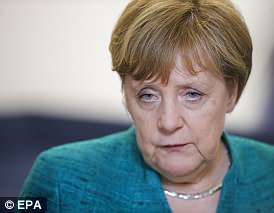 A bleary-eyed Angela Merkel stayed up all night to save her job – by clinching an EU migration deal after marathon talks at a summit in Brussels.

The German Chancellor had been given an ultimatum from her hardline coalition partners to find a Europe-wide solution to the migrant crisis.

Merkel’s political allies, Bavaria’s Christian Social Union (CSU), had called for borders to be closed to asylum seekers in a row that threatened to split the three-month-old union.

But the German leader emerged after nine hours of ‘toxic’ negotiations in Brussels overnight to reveal a ‘joint text’ which included moves to stop migrants registered in Italy and other EU countries from moving on to Germany.

There were also pledges to strengthen external borders and explore new migrant centres in north Africa.

Italy’s Prime Minister Giuseppe Conte had threatened to veto a joint conclusion for the entire agenda of the summit in Brussels until his demands were finally met before dawn.

It comes after many days of open warfare between her ministers as their Brexit splits erupted into the open.

Business Secretary Greg Clark and Chancellor Philip Hammond – leading Remainers – have warned that dire business warnings must be heeded and close ties kept with the bloc.

But Brexiteers have warned that they are colluding a ‘Project Fear Mark 2’ and are calling for more self confidence from Britain in the talks.

Today Culture Secretary Matt Hancock said the Tories must be a party of business – while delivering on the democratic Brexit vote.

He told the BBC Radio 4 Today Programme: ‘I do think it’s important that business is listened to.

‘The Conservative Party is the party of business and prosperity or we are nothing.

‘On the other hand, we have got to make sure that we deliver on the vote.’

Leaders from the bloc queued up to pile pressure on Mrs May and demand she hurries up and publishes her Brexit plans.

European Commission chief Jean-Claude Juncker pointed to Mrs May’s ‘split Cabinet’, and said the EU would have to step up preparations for no deal.

Dutch prime minister Mark Rutte suggested it was not clear who was in charge in the UK following recent battles in parliament and the Cabinet.

And Irish Taoiseach Leo Varadkar said the UK had to accept it would be a junior partner after Brexit.

Asked if a Brexit deal was at risk, Mr Rutte said: ‘I don’t want to talk in apocalyptic terms, but what I want to say is I believe the first, second and third priority now is to solve this issue of the Irish border.’

Mr Varadkar said: ‘Any relationship in the future between the EU and UK isn’t going to be one of absolute equals.

‘We’re 27 member states, the EU is one country, we’re 500million people, the UK is 60million. That basic fact needs to be realised and understood.’

Brexiteer Iain Duncan Smith said Mrs May should walk out if other EU countries ‘bully Britain’. MPs call for the power to extend EU membership

Parliament should have the power to block a ‘no deal’ and extend Britain’s membership of the EU, MPs said yesterday.

The Brexit select committee said MPs should have the power to order a ‘temporary extension’ of the UK’s membership ‘to prevent the UK leaving the EU in March 2019 without an agreement’. But Eurosceptic members of the committee, who voted against the report’s key findings, last night branded it ‘worthless’.