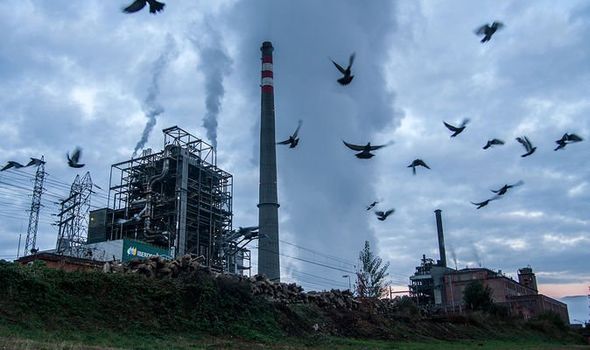 Energy prices rose sharply last year following a natural gas shortage across the globe as economies unlocked from the coronavirus pandemic. The rise in energy costs, a component of the rise in inflation, has seen the cost of living rise as household bills increase.

It comes at a time when the EU is grappling with the decision to approve the Nord Stream 2 pipeline, allowing natural gas to flow directly from Russia to Germany, circumventing Ukraine.

Meanwhile, the EU is deeply divided over what should constitute “sustainable” energy.

The Los Barrios thermal power plant, in the bay of Gibraltar, will be put to work once more after being closed three years ago.

The coal power plant had a capacity of 567 Megawatts in 2014, and has been reactivated due to increased demand for energy over the winter.

CanalSur, a local Andalusian broadcaster, said that the reversal of its closure does not mean that the Viesgo Group, which now operates the plant, will halt its decommissioning plans.

Instead, it will provide coal power temporarily before being transformed into a plant that uses renewable energy sources.

Sources close to the company told Spanish publication Europa Sur would been operating again by January 23, with energy flowing into the Spanish national grid.

On Wednesday, a ship was pictured unloading coal for the power station.

Sea-green Ecologists in Action, a campaign group based in the Bay of Gibraltar, suggested that the renewed use of coal made the pre-agreed transition to renewables “a fiasco”.

However, it is not the first Spanish fossil fuel power plant to start up production again.

In Galicia, the closure process of the As Pontes coal power station was halted in November so it could begin burning coal again temporarily, in the face of higher energy prices and increased demand.

In December, the Bank of Spain noted that there were “strains” in the energy and commodity sectors which “have also had a negative impact on numerous manufacturing sectors, such as those that make intensive use of natural gas”.

As of September, Spanish households were paying about 40 percent more than a year prior because of the crisis.

Spain’s energy pressures come as the EU becomes increasingly divided on how it should power itself while striving for net zero emission goals.

The EU Commission wants to declare not just wind and solar energy to be “sustainable”, but also gas and nuclear power.

This, it said, would make nuclear power plants easier to finance.

The plan was reportedly aimed to appease the likes of both France and Germany, which have deeply different views on how to power their respective countries.

However, it has instead caused a massive rift among member states.

On Thursday, the respective energy ministers of Spain, Austria, Luxembourg and Denmark wrote to the EU Commission to express their “deep concerns” over the draft.

They said that the “usefulness and credibility” of the taxonomy was “at stake”, adding: “We find the new draft problematic both from a political and technical point of view”.

The draft would be a “step backwards” in the fight against climate change, as the long lifespan of both nuclear and fossil fuel power plants “risks to lead to a technological lock-in for many decades and divert investments away from renewables.

“We reiterate that natural gas and nuclear power do not meet the legal and scientific requirements […] to qualify as sustainable economic activities.”