‘Don’t cry, we’re going to die together’: German flood victim reveals her terrified daughter’s words as their house was destroyed while undertaker says he ‘can’t handle any more bodies’ as death toll tops 180

A victim of Germany’s flooding crisis has told how her daughter comforted her while their home was destroyed by a torrent of water – telling her ‘don’t cry, we’re going to die together.’

The woman, who spoke anonymously from the hard-hit town of Schuld, ultimately escaped the flooding unharmed along with her family but they lost all of their possessions and their home.

Speaking amidst the ruins of the town on Sunday, the woman said: ‘I say to myself, I should be happy we’re alive… but my children don’t have a home any more. What will I do now? I don’t know. I don’t.’

Meanwhile an undertaker in the nearby city of Bonn spoke about his own struggles in dealing with the number of bodies coming in, as the death toll from the disaster topped 180 with many still missing.

Ferdinand Pfahl, 62, told newspaper Bild that he has been an undertaker since he was 14 but has ‘never seen anything like this,’ adding: ‘The extent is terrible, you can no longer see an end at all. When will it finally end?’

The flooding – some of the worst to hit Europe in decades – was triggered by torrential downpours which dumped three months of rain across western Germany, part of Belgium, the Netherlands and Luxembourg last week.

The rains have now stopped but the cleanup has only just begun – with homes, businesses and infrastructure destroyed across huge swathes of countryside with the country’s finance minister estimating the final repair bill will be in the ‘billions’. 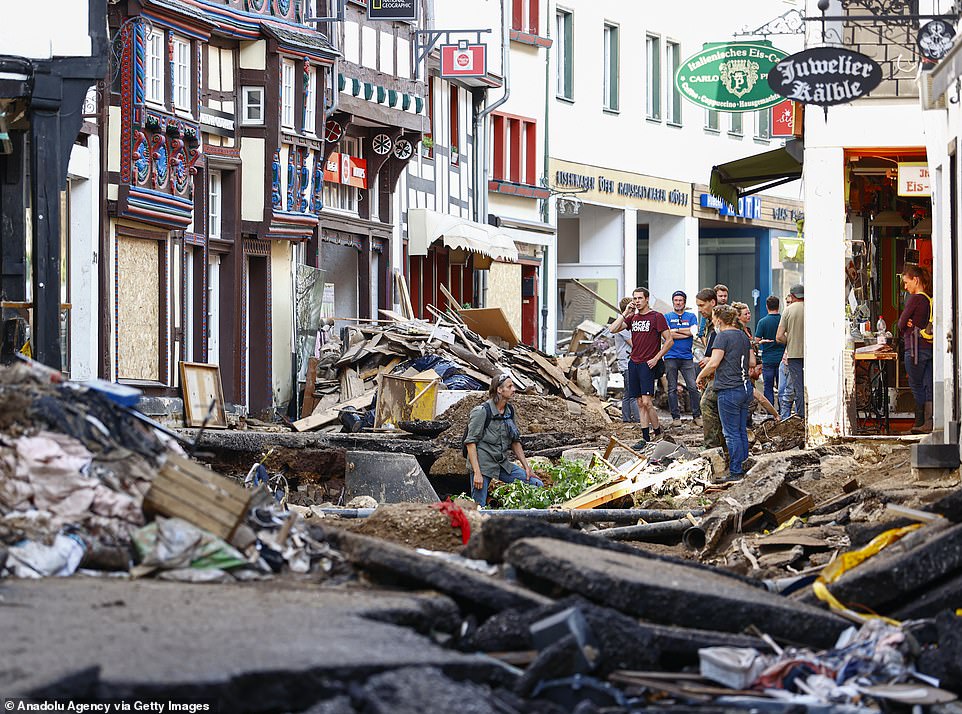 A near-destroyed street is pictured in the German town of Euskirchen after flooding last week caused widespread destruction, with the death toll now above 180 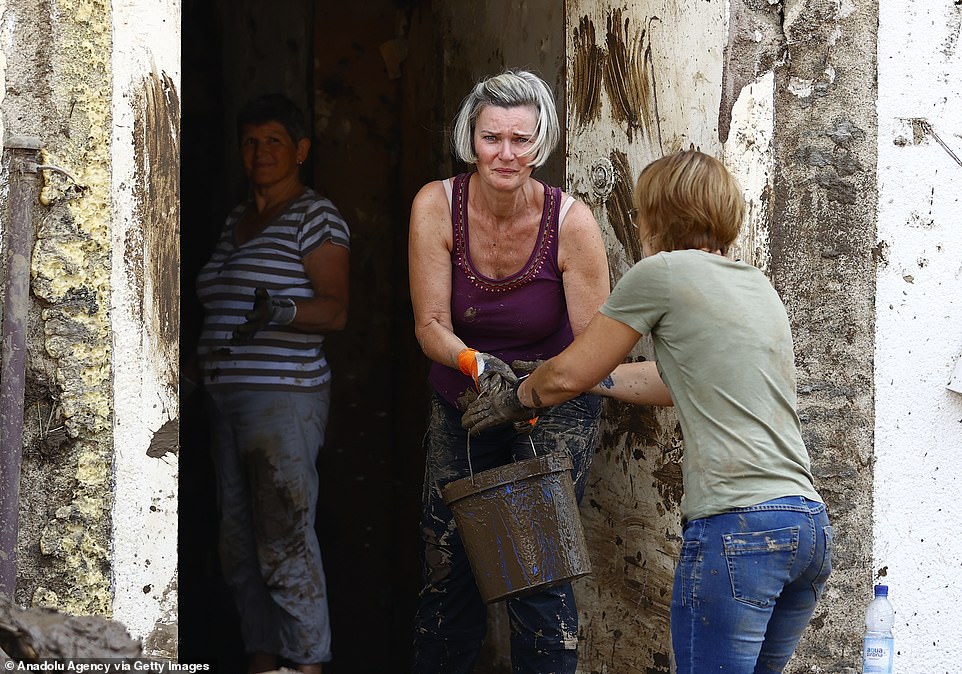 A woman helps shovel toxic mud out of a home in Schuld, Germany, which was among the hardest-hit in flooding – though it has emerged the nobody in the town died 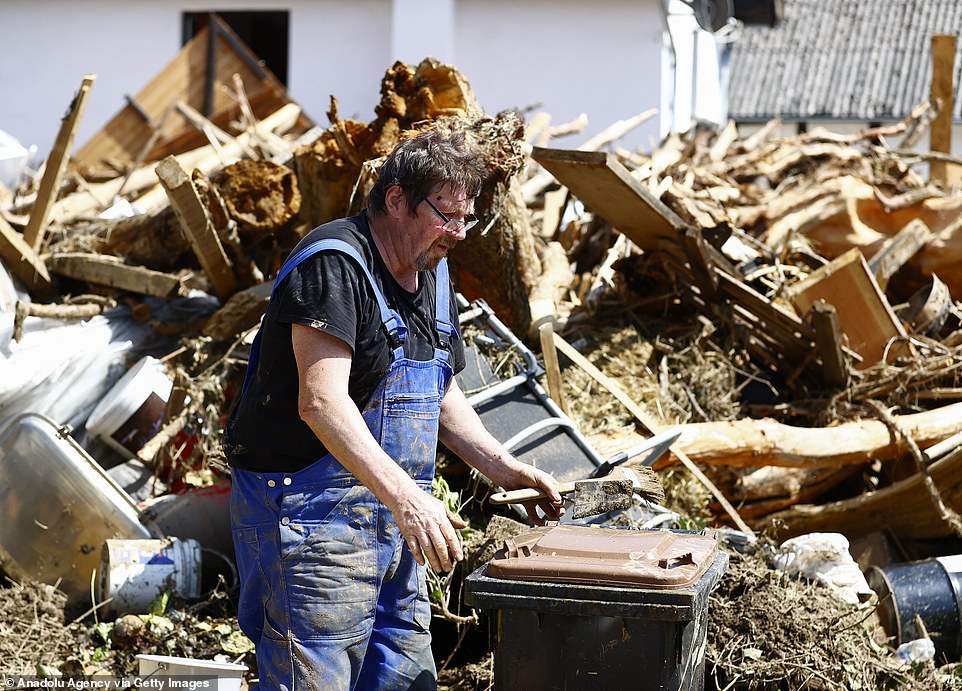 A man helps with cleanup operations in the town of Schuld, Germany, as the country’s finance minister estimates that the final repair bill will end up being in the ‘billions’ 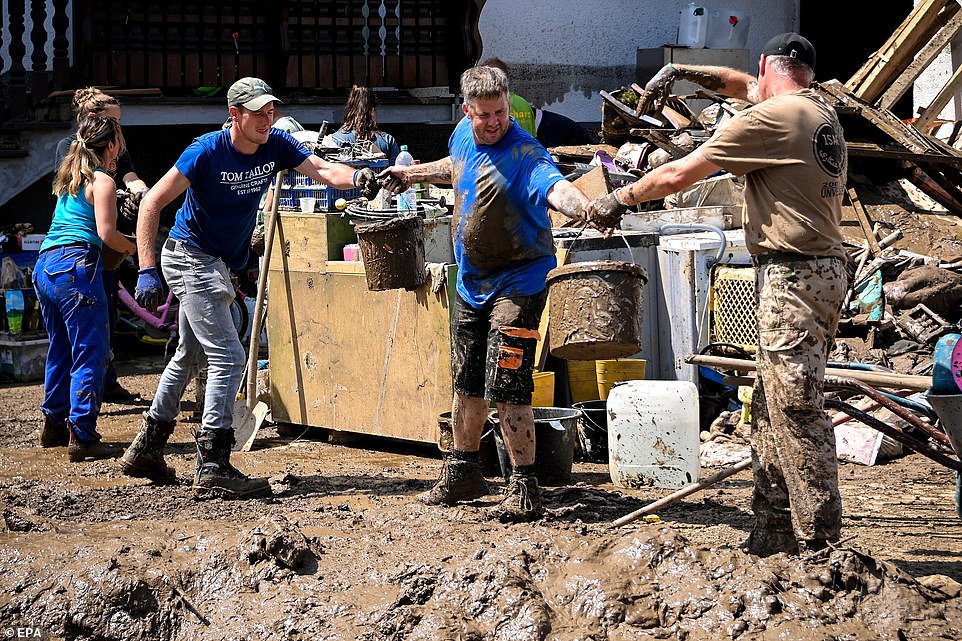 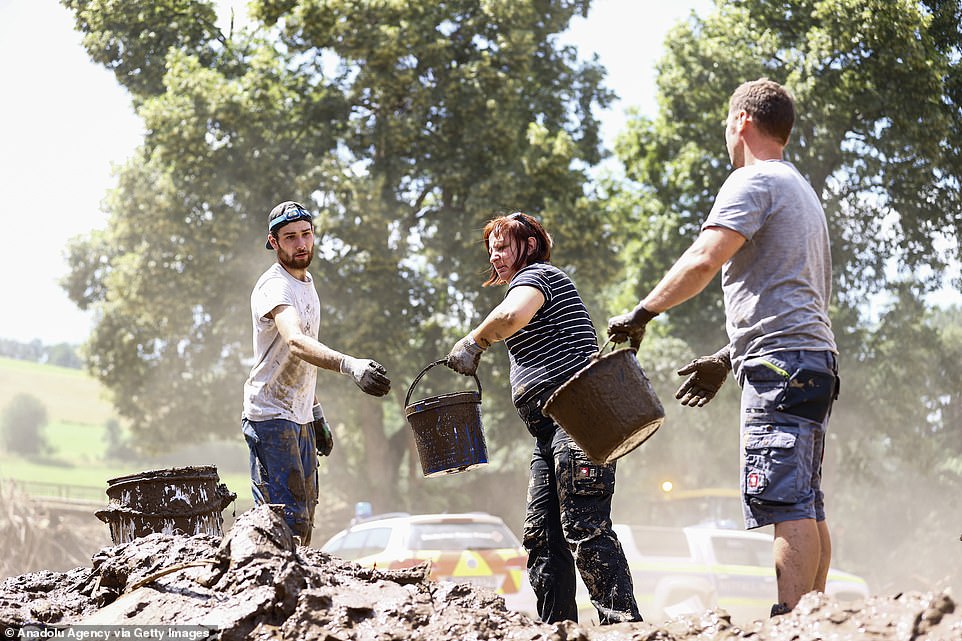 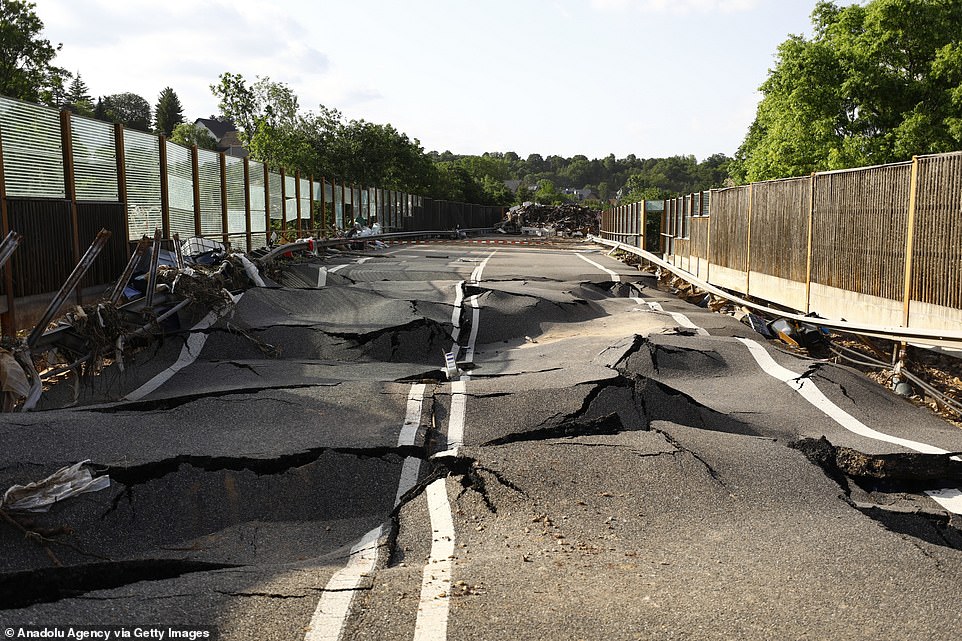 A road leading to the town of Euskirchen, in western Germany, is almost completely destroyed following last week’s flood 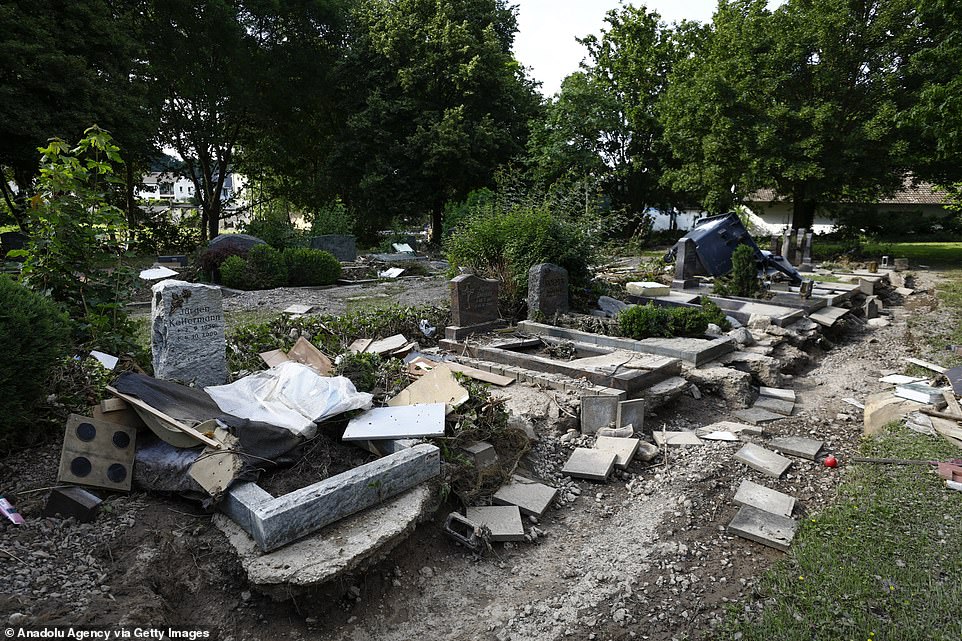 A storm-damaged graveyard is pictured in the town of Euskirchen, Germany, following floods which killed 180 last week 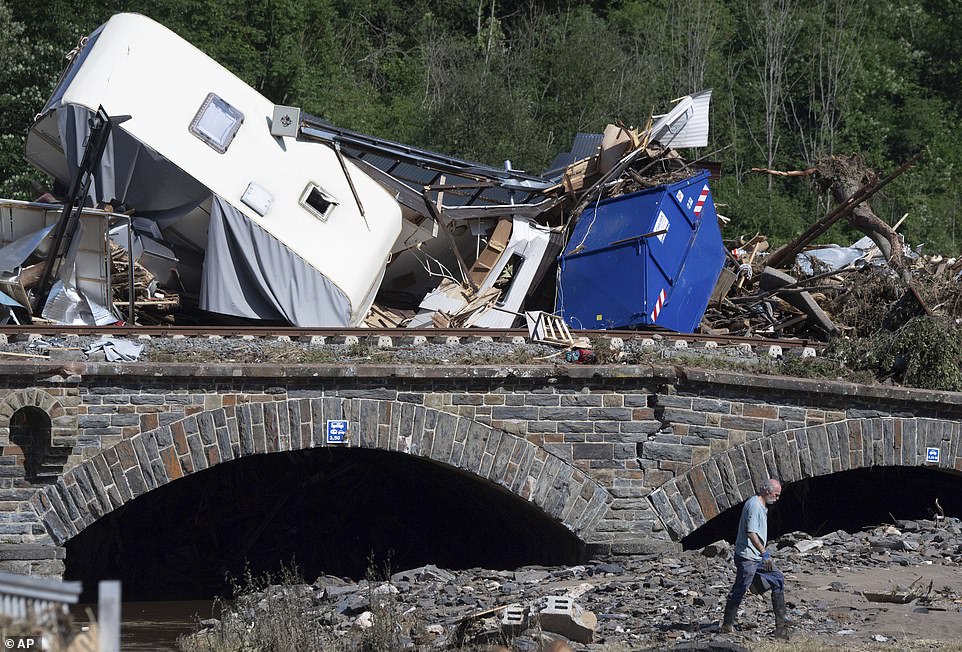 Caravans, cars and mobile homes that were swept away by the flood wave hang together on a bridge over the River Ahr, in Altenahr, western Germany 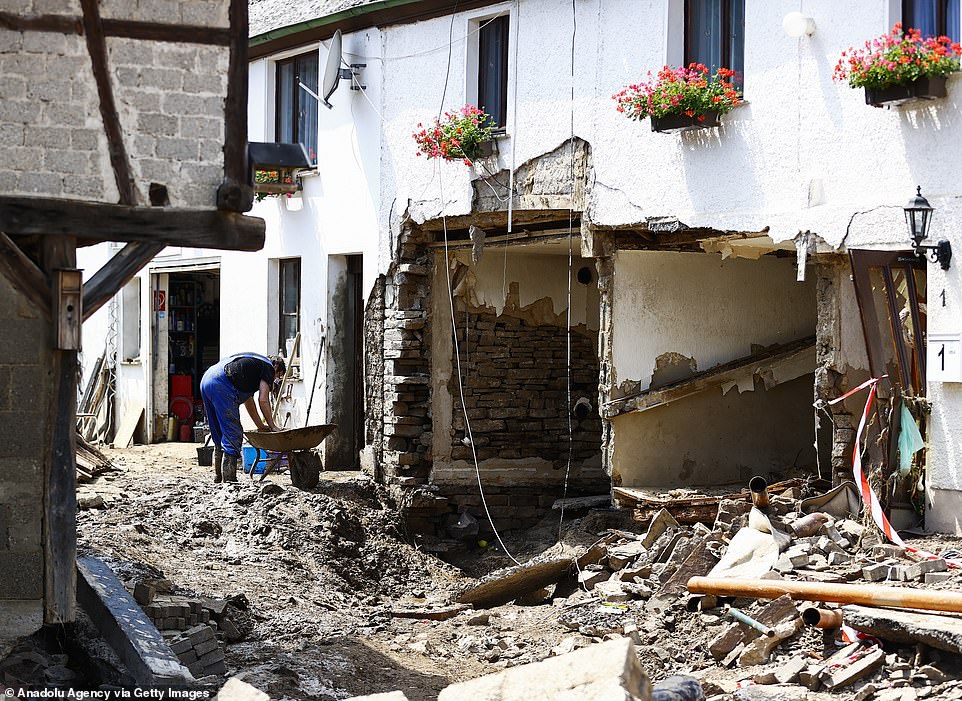 A man helps clear away rubble in the west German town of Schuld, which was all-but destroyed in last week’s flooding

Survivors of floods in Germany which killed at least 180 people and left scores more missing have been warned of the risk of disease in the wake of the disaster.

Klaus-Dieter Zastrow, a hygienist, told Bild that flooding has ruptured the sewage systems in many of the affected towns – leading wastewater and drinker water to mix together, often forming a toxic mud that coats streets and flooded buildings.

Zastrow warned of the risk of people contracting stomach bugs and even cholera if they end up ingesting the mud or drinking infected water.

‘People must primarily be supplied with drinking water and the wastewater systematically separated,’ Zastrow warned.

‘The adage “First comes the catastrophe, then the epidemic” must not become reality.’

Visiting the town of Schuld and the hard-hit Ahrweiler region in which it sits on Sunday, German Chancellor Angela Merkel struggled to find words to describe the scene that greeted her.

Merkel said she came away from Schuld, still partly strewn with rubble and mud in bright sunshine, with ‘a real picture of, I must say, the surreal, ghostly situation.’

‘It is shocking – I would almost say that the German language barely has words for the devastation that has been wreaked,’ she said at a news conference in a nearby town.

Merkel said authorities will work to ‘set the world right again in this beautiful region, step by step,’ and her Cabinet will approve an immediate and medium-term financial aid program on Wednesday.

The Ahrweiler region accounts for 112 of those confirmed dead in the flooding, amid fears the toll could rise further with many still missing.

Finance Minister Olaf Scholz told the Bild am Sonntag newspaper that more than 300 million euros ($354 million) will be needed immediately.

And he said officials must set up a longer-term rebuilding program which, from experience with previous flooding, will be in the billions of euros.

‘Thankfully, Germany is a country that can manage this financially,’ said Merkel, who is stepping down as chancellor following an election in September.

‘Germany is a strong country and we will stand up to this force of nature in the short term – but also in the medium and long term, through policy that pays more regard to nature and the climate than we did in recent years. That will be necessary too.’

A dam in Germany that risked collapsing and inundating nearby villages has been declared safe as the cleanup operation from last week’s floods gathers pace.

Firefighters working to pump out gallons of water that accumulated in the Steinbach reservoir said on Monday that the water had reached ‘un-critical levels’ and the dam is no longer at risk.

Around 4,500 people evacuated from the towns of Schweinheim, Flamersheim and Palmersheim on Thursday last week should be able to return to their homes around the middle of the day, and official added.

The dam was declared at-risk after its drainage system was blocked with debris from the flooding, causing a huge amount of water to build up behind it – creating pressure that could have caused it to burst.

Firefighters quickly moved in with pumps to drain the water, and after four solid days of effort had finally brought the situation under control.

Climate scientists say the link between extreme weather and global warming is unmistakable and the urgency to tackle climate change undeniable.

Scientists can’t yet say for sure whether climate change caused the flooding, but they insist that it certainly exacerbates the extreme weather disasters on display around the world.

‘We must get faster in the battle against climate change,’ Merkel said, pointing to policies already set in motion by Germany and the European Union to cut greenhouse gas emissions.

‘And nevertheless, the second lesson is that we must pay great attention to adaptation’ to climate change.

Investing in fighting climate change is expensive, she said, but failing to do so is even more costly.

‘One flood isn’t the example of climate change, but if we look at the loss events of recent years, decades, then they are simply more frequent than they were previously – so we must make a great effort,’ Merkel said.

Residents in the devastated areas will be needing support and comfort for a long time yet.

‘This flood will leave scars on the people of Schuld – scars that you don’t forget, that can’t be overcome, because our lives changed from one day to the next,’ Mayor Helmut Lussi said, breaking into sobs as he spoke.

Although the rain has stopped in the worst-affected areas of Germany, Belgium and the Netherlands, storms and downpours have persisted elsewhere in western and central Europe.

There was flooding Saturday night in the German-Czech border area, in Germany’s southeastern corner, and over the border in Austria.

About 130 people were evacuated in Germany’s Berchtesgaden area after the Ache River swelled. At least one person was killed and the rail line to Berchtesgaden was closed.

The Berchtesgaden area also is the home of the sliding track in Koenigssee, the site of major international bobsled, skeleton and luge events for more than 50 years. 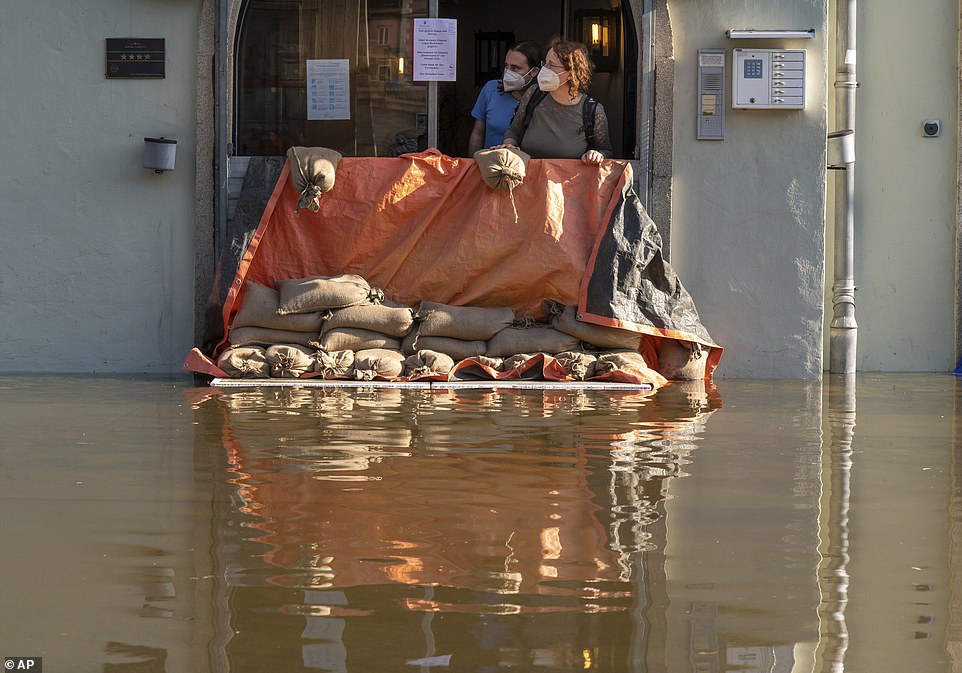 Two women look out of the entrance of a hotel over the flood barrier keeping back water from the Danube in Passau, Germany 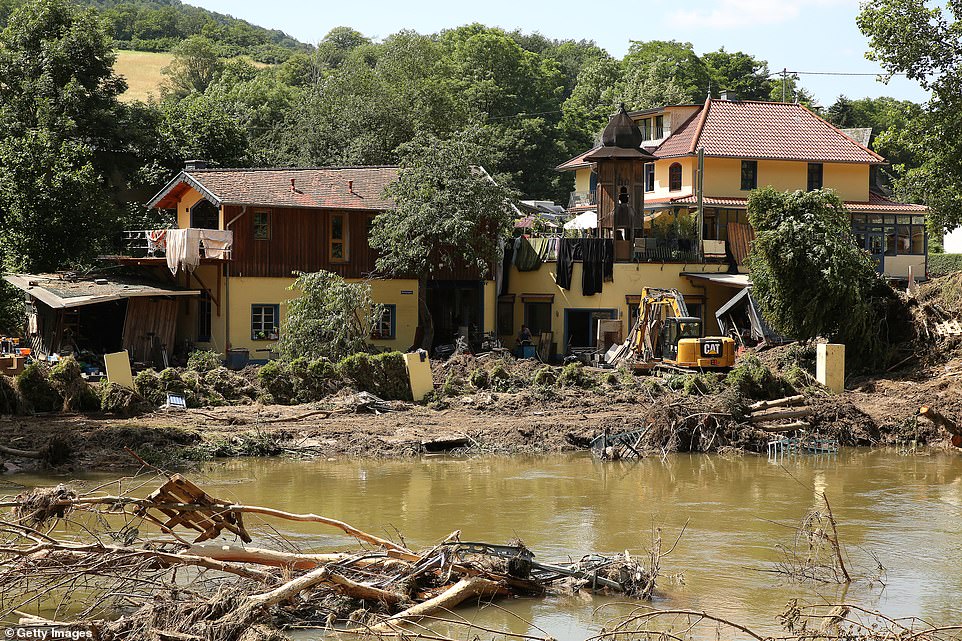 Damage is seen after a major flood in Germany’s mountainous Eifel area, in the town of Schuld 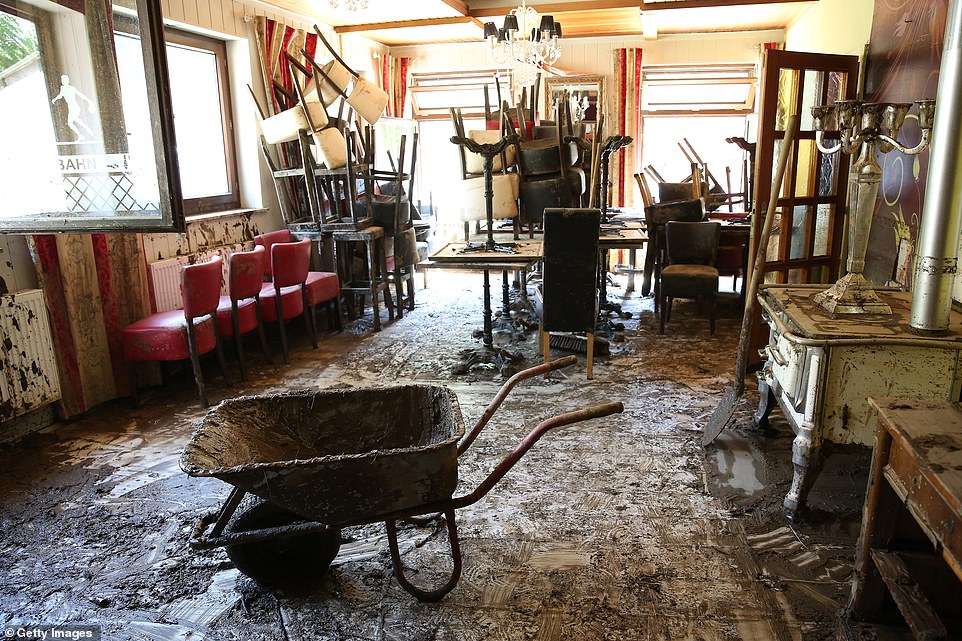 The damaged, muddy interior of a traditional German brewery restaurant is seen after a major flood in Germany’s mountainous Eifel area 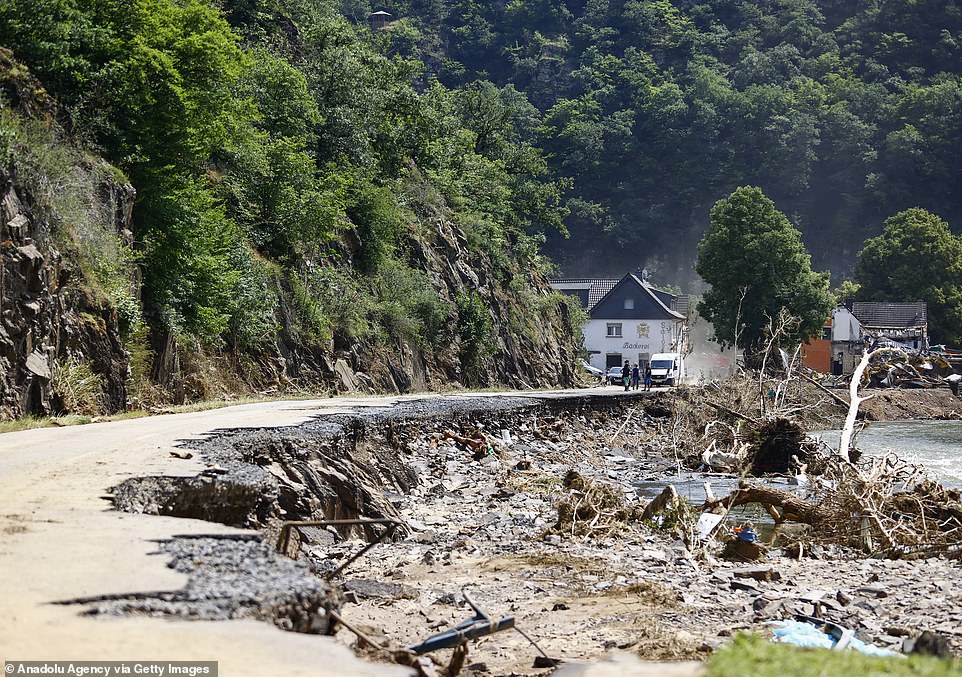 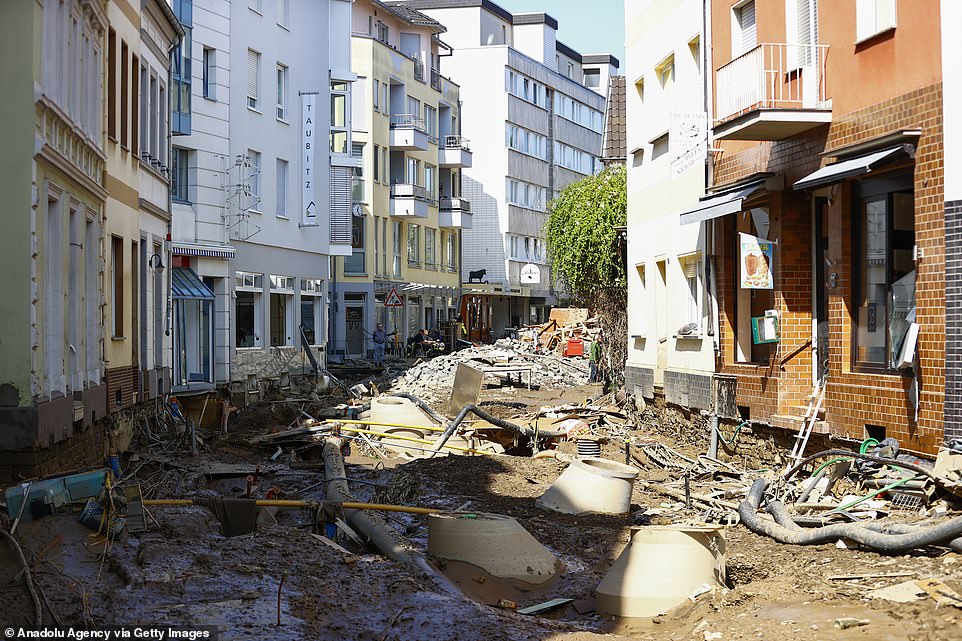 Sewage pipes and the underside of manhole covers are seen after flooding in the town of Bad Neuenahr, Germany, completely stripped away the road surface 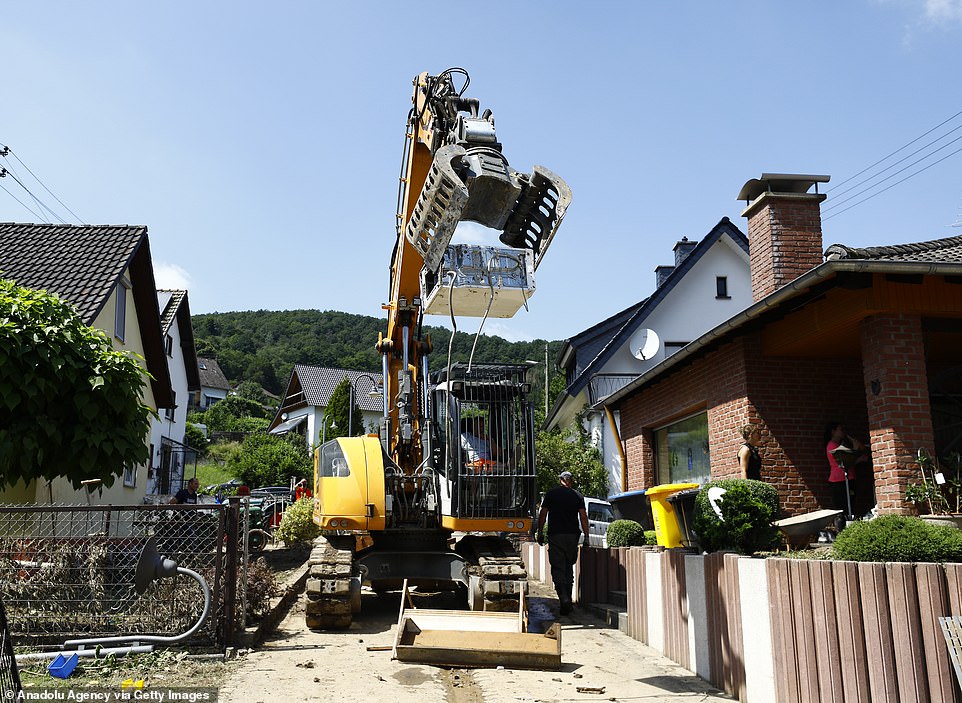 A digger helps lift the remains of a fridge off a street in Schuld, Germany, following heavy flooding

Large segments of that track were destroyed, parts of the concrete chute turned into rubble by the rushing water.

A flash flood hit the nearby Austrian town of Hallein late Saturday, but there were no reports of casualties. Farther west, flooding struck parts of the town of Kufstein. Heavy rain and storms caused serious damage in several parts of Austria.

Pope Francis prayed for the flood victims and in support of the ‘efforts of all to help those who suffered great damage.’

‘I express my closeness to the populations of Germany, Belgium and Holland, hit by catastrophic flooding,’ he said Sunday in his first public appearance to the faithful in St. Peter’s Square after major surgery.

‘May the Lord welcome the deceased and comfort the family members.’

In the eastern Belgian town of Pepinster, soldiers and firefighters on Sunday searched for any remaining survivors or bodies, according to public broadcaster RTBF.

All the houses still standing have been searched, so the effort focused on those that collapsed and in a valley downstream for anyone possibly swept away by the raging torrent.

The ground in the town remains unstable and several more houses could collapse. ‘We have to be careful with every step we take,’ fire officer Olivier Jiust was quoted as saying.

The flood-stricken Dutch town of Venlo allowed most residents back home Sunday, and trains began running again in the area, authorities said.

Meanwhile, a cow swept 100 kilometers (60 miles) along a flooded Dutch river will live out its days in a meadow, according to its owner.

Farmer Har Smeets told local broadcaster 1Limburg that he lost 10 other cows to high water in the southern part of the Netherlands, but one was found by a cyclist outside the town of Escharen and rescued by firefighters.

The cow, originally from the town of Echt, was seen Saturday standing with only its nose poking out of the muddy water of the Maas River, unable to free itself.

Fire brigades managed to pull the animal onto dry land, and authorities traced the owner via an ear tag. Smeets says the cow has eaten and is resting comfortably.

‘It is unbelievable that such an animal can swim or float for so long and then still have the strength to come ashore,’ he said.