Thousands of people evacuated as cyclones may cause widespread flooding in Northern Australia. 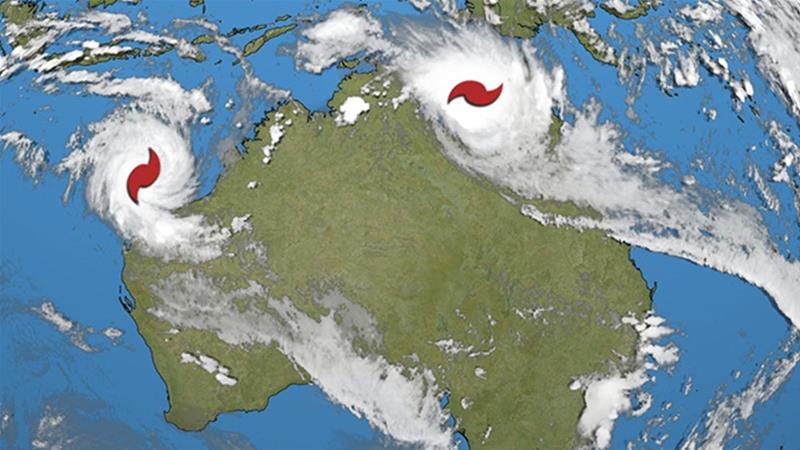 Two tropical cyclones, named Trevor and Veronica, are heading towards Northern Australia, one to the northeast and another to the northwest.

Tropical cyclone Trevor crossed northern Queensland four days ago and is now rapidly intensifying in the Gulf of Carpentaria.

A state of emergency has been declared in the Northern Territory and thousands of people have been evacuated from their homes.

The storm is expected to make landfall around 9:30am local time on Saturday (00:00 GMT) and batter northern coastline with winds gusting up to 275 kilometres an hour.

Trevor is a large cyclone, with destructive winds reaching 300km/h from its centre, so threatens a huge swath of the coastline. Mercifully this part of Australia is sparsely-populated.

Trevor is expected to remain at tropical cyclone strength for at least 24 hours after landfall, meaning communities situated hundreds of kilometres inland could also experience flooding and wind damage.

Evacuation centres have been set up in Darwin and Katherine for people who have been evacuated from the path of the cyclone.

Earlier on Friday, torrential rain in Darwin added to the misery and swamped a tent city set up for those at risk from the storm.

The other cyclone threatening the Australian coastline is Tropical Cyclone Veronica, which is currently a more powerful system. Veronica is still intensifying, but fortunately, it is expected to weaken slightly before it makes landfall on the coast of Western Australia.

However, when it hits land around 00:00 GMT on Sunday, it will still be a strong system with wind gusts of approximately 225km/h.

As the storm is moving incredibly slowly, it is expected to bring with it a huge storm surge. This is on top of the eight-metre waves that the system will be generating.

Coastal flooding is, therefore, a major concern, but so is flooding from the rain. The Australian Bureau of Meteorology has forecast as much as 500mm rainfall is expected in some places.

The average rainfall for the entire year is 304mm, so this would be an exceptional amount of rain to a part of the coastline that is not equipped to deal with this amount of water.

Veronica is expected to land somewhere between the iron ore mining towns of Karratha and Port Hedland, where residents are currently sandbagging their homes and stockpiling provisions.

The Pilbara Ports Authority has cleared all large commercial vessels from harbours at Port Hedland, Ashburton and Port of Dampier.

Cyclones in Australia’s north are fairly common, but to have two such large cyclones to be making landfall in quick succession is rare. If both make landfall with gusts of over 225km/h (an Australian category 4), it would only be the second time in its history.