Even a British High Commissioner’s son wasn’t British enough to get a passport! Former diplomat tells of citizenship woes for child born while he was posted in Trinidad and accuses Home Office of ‘default refusal’ 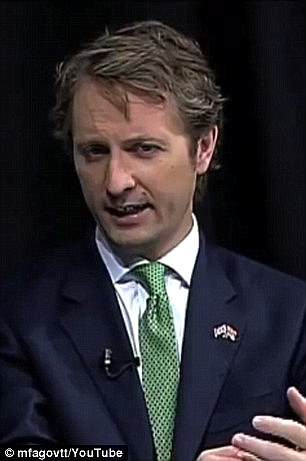 Former British High Commissioner Arthur Snell said he even struggled to secure British citizenship for his son, who was born outside of the UK

A former British High Commissioner has slammed the Home Office after revealing he struggled to get his own son citizenship in light of the Windrush scandal.

Arthur Snell explained on Twitter that he and his wife had a son in Trinidad in 2011, but soon ‘received notification that he had been refused’.

He added: ‘You cannot be more British that the British High Commissioner but he wasn’t British enough.’

Mr Snell and his family’s plight worsened when they were told his son was also ineligible for British citizenship.

Although the then High Commissioner managed to resolve the issue, he said he ‘felt powerless and nervous in spite of my privileged position’.

‘Compared to the experience of many deserving British residents, including #Windrush generations, my problems were trivial,’ Mr Snell added.

‘But it illustrates a #HomeOffice that defaults to refusal wherever possible.’

Mr Snell is a former diplomat and has served throughout the world, including Afghanistan, Iraq, Yemen and Zimbabwe. 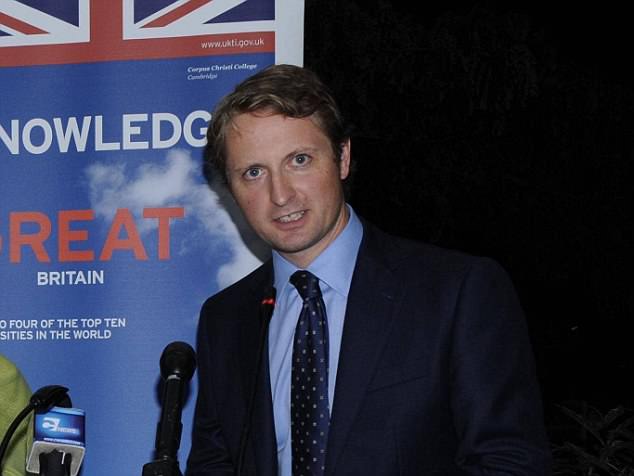 Mr Snell and his family’s plight worsened when they were told his son was also ineligible for British citizenship, however he did managed to resolve the situation 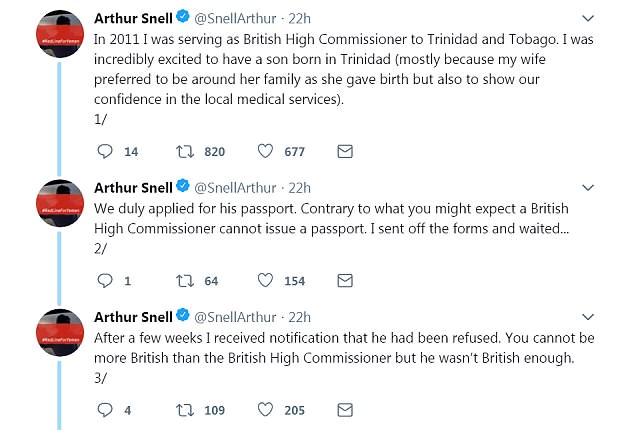 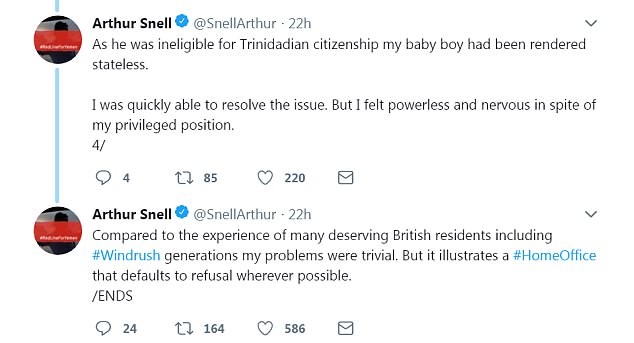 Arthur Snell explained on Twitter that he and his wife had a son in Trinidad in 2011, but soon ‘received notification that he had been refused’

He said his story was ‘a short tale of how the Home Office treats everyone with disdain, to the point of absurdity’.

He told The Londoner today: ‘It’s a hostility policy that falls heaviest on those who have the least.’

Parents whose children are born outside of the UK must apply to the Home Office to register their child as a British Citizen. 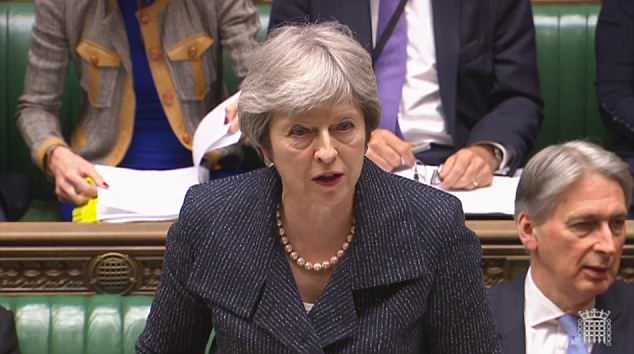 At PMQs today, Theresa May said it was right that successive governments had worked to ensure there were tough rules for people who had no right to be in the UK 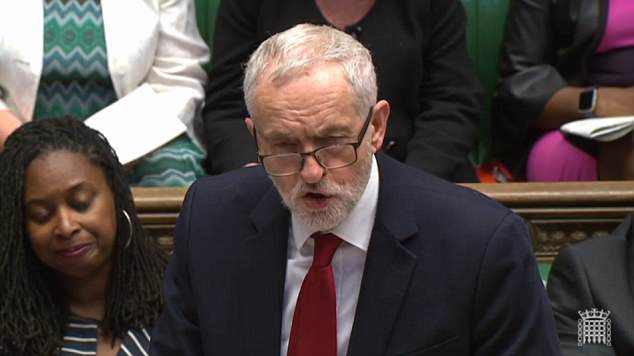 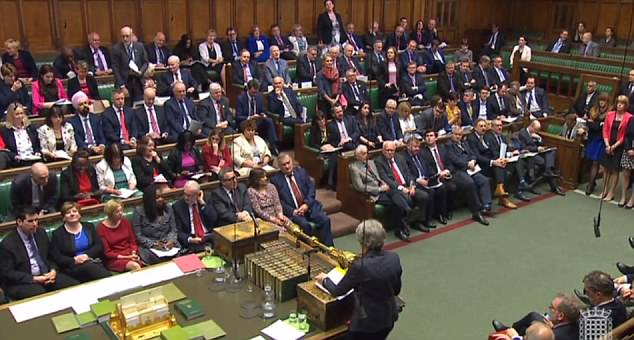 They have to complete a 31-page form, pay £973 and £19.20 for biometric information such as fingerprints and a photograph.

What is the Windrush scandal and how did the fiasco develop?

The 492 passengers were temporarily housed near Brixton in London. Over the following decades some 500,000 came to the UK.

Many arrived on their parents’ passports and were not formally naturalised as British citizens.

1973 – A new immigration Act comes into force putting the onus on individuals to prove they have previously been resident in the UK.

The move came despite staff warnings that the move would make it harder to check the records of older Caribbean-born residents experiencing residency difficulties, it was claimed

2014 – A protection that exempted Commonwealth residents from enforced removal was removed under a new law. Theresa May was Home Secretary at the time.

Under a crackdown on illegals, Windrush immigrants are obliged to provide proof they were resident in the UK before 1973.

April 2018 – Allegations that Windrush immigrants are being threatened with deportation break. Theresa May issued a grovelling apology to Caribbean leaders after major backlash

It comes as Theresa May  defended her ‘hostile environment’ policy on illegal immigrants today as Jeremy Corbyn slammed the handling of the Windrush scandal.

The Prime Minister again admitted the treatment of those who came to the UK from the Caribbean decades ago had been unacceptable.

Mrs May insisted those individuals were ‘British’ and had contributed hugely to the country.

But she said it was right that successive governments had worked to ensure there were tough rules for people who had no right to be in the UK.

The defence came after the Labour leader used PMQs to launch a furious attack on the premier and Home Secretary Amber Rudd over the WIndrush debacle.

He insisted all those caught up in the crackdown on illegal immigration launched in 2014 ‘should be granted full status immediately’.

He said an internal Home Office memo warned four years ago that the ‘hostile environment policies could make it harder for people like the Windrush generation to find homes’.

Mr Corbyn said that Ms Rudd had ‘inherited a failing policy and made it worse’ and repeated calls for her to resign.

Mrs May replied by pointing out that Labour had decided not to vote against the Immigration Act in 2014.

‘Because it isn’t fair that people who work hard day in and day out, who contribute to this country, who put into the life of this country, are seeing people who are here illegally accessing services in the same way.

‘We are acting to ensure that those people who are here legally are given the support that they need.’

A Home Office spokesperson told MailOnline: ‘We are sorry for any distress caused to the Snell family.’