Evil Russian estate agent MURDERED clients by drowning them or burying them alive after duping them into selling homes for cash, pocketing the money and grabbing their property 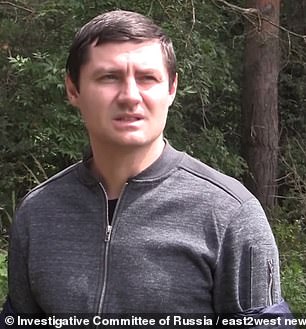 An evil estate agent has admitted leading a sinister Russian gang that tricked vulnerable elderly people to sell their homes for a profit – then killed them and grabbed the properties, say police.

In some cases, the criminal ring ‘buried their victims alive’.

Roman Shugaibov, 34, was shown in shocking crime scene videos confessing to police how he murdered lonely homeowners then buried their bodies in illegal graves in cemeteries.

The estate agent led seven men and eight women in his criminal ring – all of them now detained but not identified.

They are known to have killed at least nine victims, but police fear there are more.

Shugaibov, an estate agent from Tver region, north west of Moscow, made a profit of at least £350,000, according to law enforcement.

The gang ‘won the trust’ of vulnerable people, many of them elderly and prone to drink.

They coaxed them to sell their flats close to Moscow and swap for an out of town home, then pocket the cash difference as money to boost their meagre salaries or pensions.

The victim signed over the flat to a buyer and was paid in cash.

Then the victim used the money to immediately ‘buy’ a smaller place from a seller, also a gang member who was paid in cash.

‘His accomplices persuaded the victims to sell their apartments and promised to buy some other property for them, with a profit for them,’ said Interior Ministry spokeswoman Irina Volk. 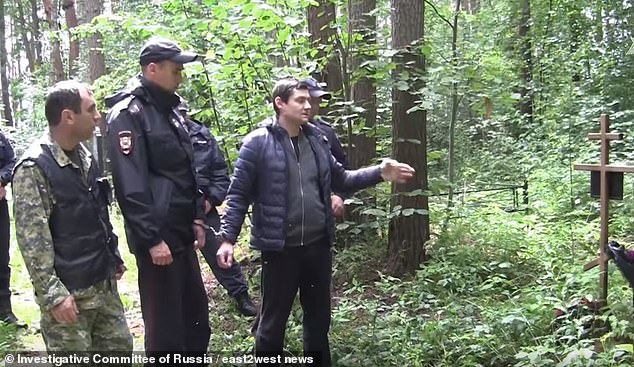 Evil estate agent Roman Shugaibov shows the the police one of the graves of an elderly person he and his gang killed. ‘I took a cross and flowers from another grave,’ he said. This was to ‘mask’ the unauthorised grave, he added

But once the sale was clinched, the cruel agents signed over the homes to the gang and quickly murdered the homeowners.

The first deal allowed the gang to resell the property and keep the proceeds of the sale.

The victims were either shot dead, drowned in a river, or ‘buried alive’, according the Russian Investigative Committee.

In one video sequence, Shugaibov tells detectives how he dragged a homeowner from his car, then held him in the water ‘with his face down’.

He ‘waited for about 10 minutes, until he stopped showing any sign of life.

‘After that I drove away.’ 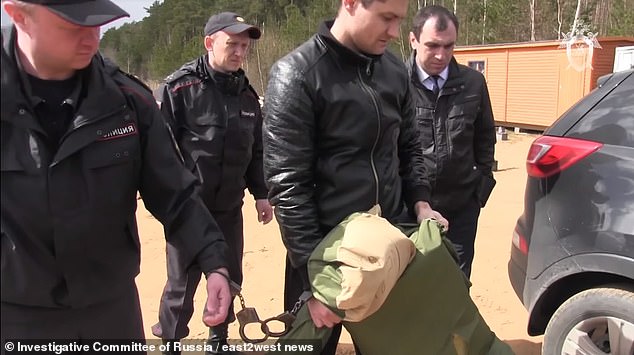 A mannequin was used to demonstrate the murder.

In other cases, he dug holes in cemeteries and buried the victims in seemingly normal graves, stealing crosses and flowers from other plots to mask his evil crime.

Some were thrown alive into these illegal graves in official cemeteries.

In one case highlighted on video, Shugaibov killed a man called Sergey whose flat had been stolen.

‘When he stopped showing any signs of life, I began to dig a grave – here.’

He showed detectives the spot in the bleak graveyard.

‘I took a cross and flowers from another grave,’ he said.

This was to ‘mask’ the unauthorised grave, he said.

The identities of other gang members and their alleged victims have not been made public.