When American Idol Season 20’s fourth auditions episode aired Sunday, longtime viewers spotted a familiar face — and a familiar halter top. Twenty-one-year-old fashion stylist Zaréh adorably showed up with her mother, Season 4 top eight finalist Nadia Turner, wearing the same gold-embroidered camisole that Nadia wore the first time she appeared on Idol way back in 2005. The judges and host Ryan Seacrest were surprised, of course, but no one was more surprised than Nadia herself — who was tricked into attending Zaréh’s audition, thinking they were about to enjoy a mother/daughter spa day. 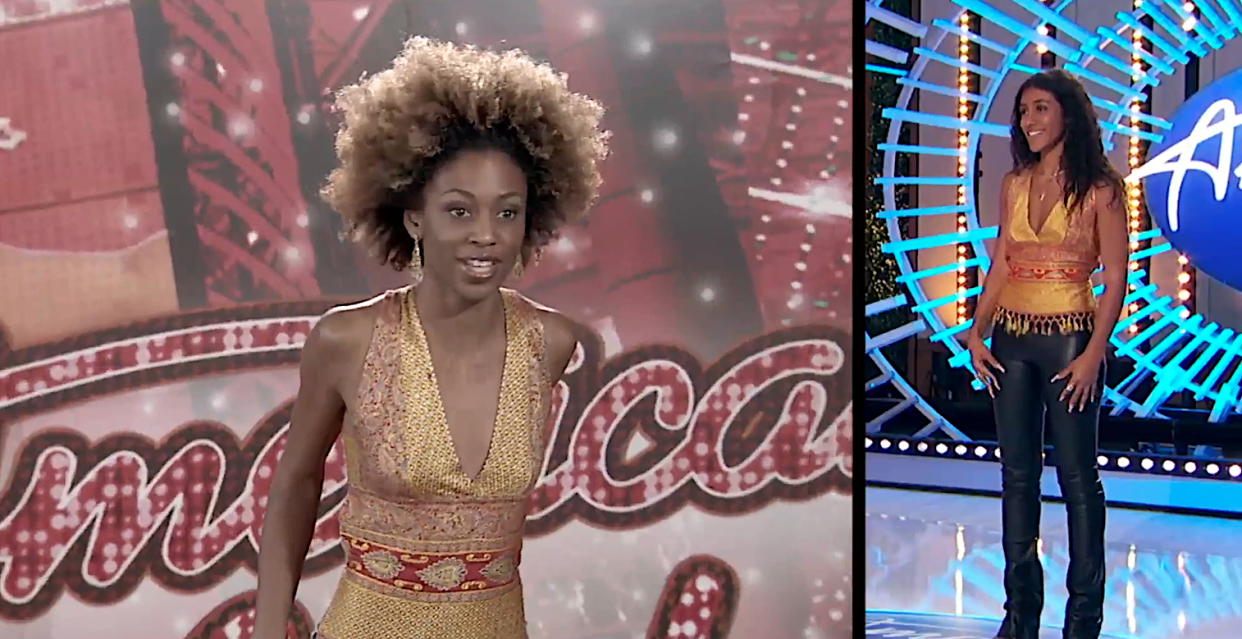 Nadia had zero idea where she was, since Zaréh had blindfolded her on the car ride to the Idol set, but when Ryan took Nadia’s hands and distinctively intoned, “This… is American Idol,” Nadia’s jaw dropped. And once she quickly got over the mild disappointment that she and Zaréh were in fact not headed to “the damn spa,” she seemed delighted to reunite with Ryan and watch her daughter recreate Idol history.

Nadia was positively beaming listening to Zaréh, as she murmured to her old pal Ryan, “She can totally sing!” Eventually the proud mama, who’d been grooving along to the performance, began to tear up. (“She’s crying, but she’s gyrating,” chuckled judge Lionel Richie). So, Lionel nicely lent her one of his handkerchiefs — which he soon regretted, once he and Katy Perry became misty-eyed themselves.

For those who don’t remember Idol Season 4 (the Carrie Underwood/Bo Bice season), Nadia was an early standout, and it was an absolute travesty that she didn’t make it further than eighth place. The rock ‘n’ soul diva had serious stage presence and star quality, but was just a little ahead of her time. But will this be Zaréh’s time? That remains to be seen. She looked chic and showcased a pleasantly smooth, soulful voice, but I don’t think she brought her mother’s rawness and sass to Jazmine Sullivan’s breakup anthem “Bust Your Windows.” In fact, judge Luke Bryan even advised Zaréh to “gritty it up” and “put some stank and grease on it.”

However, an intrigued Katy said Zaréh had a “cool vibe” and “the beginnings of what could be a real artist,” so Zaréh did get a golden ticket — and maybe, one day, she could end up alongside her mom on an updated version of Yahoo’s Coolest Idols list. Either way, I do hope that she and Nadia went to the day spa afterwards to celebrate her successful audition.

As for the rest of Sunday’s episode, it started off quite excitingly with a “Sunset Strip” theme — with a random cameo by Motley Crue’s Nikki Sixx; the nostalgic strains of the Crue’s “Home Sweet Home” (fun fact: Carrie Underwood recorded a version of that power ballad as Season 8’s goodbye song); a parade of Central Casting “rockers”; and a mention of L.A. icons the Red Hot Chili Peppers. (Fun/ironic fact: the Peppers have always refused to clear their songs for Idol or any other singing show. Whoops!) But then we saw no rockers audition, and we heard no ‘80s power ballads. Oh well. It’s too bad Nadia’s former Season 4 castmate, Rock of Ages star Constantine Maroulis — or last season's badass Casey Bishop, who memorably auditioned with the Crue's "Live Wire" — wasn’t around.

However, along with Zaréh’s early promise, we did see several other talented singers who rocked in their own quiet ways. These were the other successful auditions of the night:

This overcaffeinated Irish jigger worked my last nerve, and seemingly the judges’ nerves, with his goofball antics. “This is kind of a serious business,” Katy sternly warned him. But the judges still let him sing a second song. Thomas’s Leon Bridges cover was admittedly much better — the guy can sing — though I still found him exhausting. But Lionel, who was a “class clown” in his youth, and Katy, who confessed that she’d once entered a record label meeting doing a cartwheel and used to be “a lot” before learning how to tone down her shtick, seemed to see themselves in Thomas. However, I suspect the real reason why the judges gave Thomas a second shot, let alone a golden ticket, is because the show’s producers believe he’ll be good trainwreck TV. “You in Hollywood Week would be hilarious,” Lionel predicted. Ugh.

Sam tried out a month earlier in Austin with a Yebba song, and while Katy adored her, she was outvoted by her less impressed fellow judges. Katy became so obsessed with this one-that-got-away that she even had a “Sam, Lydia & Grace” T-shirt printed up for “a group that needs to be remembered.” (Lydia Samuels and Aretha Franklin’s granddaughter Grace Franklin are two other contestants that Katy unsuccessfully fought to put through to Hollywood this season.) So, of course Katy was trilled when Sam returned to give it another go this week, running up to hug Sam and exclaimed, “I talk about you all the time!” And this time, Sam had more confidence and a really strong original song. “Thank God you got so much better in such a short amount of time. … Whatever I said in Austin, I take back,” said Luke, before Sam received three yeses. Now I wonder if Lydia and Grace will be back for their own do-overs soon. I mean, if the judges were willing to put through Thomas Patrick Moran on the first try, then those two girls deserve another shot, right?

This shy security officer is a massive fan of Season 11 Idol winner Phillip Phillips; P-Squared actually sent him an encouraging pre-audition video message, and Fritz even entered the audition room as if cosplaying as Phillip, with his flannel button-down and acoustic guitar. But I don’t think Fritz is at Phillip’s level just yet. Once he made it to the chorus of this Lewis Capaldi weeper, he let loose and brought some raw emotion to the performance, but it was all sleepy coffeehouse fodder before that. Luke said no, but Lionel and Katy saw enough promise to give Fritz a golden ticket, with Katy telling Fritz, “I need you to find who you are as an artist.”

When this piano-playing Southern soul crooner cited William Hung as his all-time favorite Idol contestant, he seemed like he’d be a joke contestant. But Kevin’s Otis Redding cover was serious stuff, earning a standing ovation. “One of those ad-libs from another lifetime ago,” Katy gushed. He bangs, he bangs! This guy is no joke.

Another returning contestant, Jacob was cut in Hollywood Week two years ago. However, that experience gave him the “kick in the butt” he needed, and now having now overcome his “absolute fear” and losing 60 pounds, he returned to slay Katy’s Olympics anthem, handing the operatic notes with Adam Lambert-like ease. Luke and Lionel wrote down “yes” before Jacob was even finished, and Katy told him, “I really think you chose the right song and did it justice. … Those words are your words now.”

Church singer Haley, who was five and a half months pregnant at the time of her audition, came in ready to make her future son proud. But while her voice was bell-clear and pretty, she seemed nervous and tentative; her performance lacked oomph. “It wasn’t a perfect audition. There were some amateur moments, but then there were some real moments,” Luke mused. However, Haley eagerly took Katy’s coaching regarding Miley Cyrus’s power notes, and when Katy ordered her to “fight for it” on her second song (second chances have become a recurring theme this season), she finally gave the judges the passion they craved.

This ivory-tickling songbird sparkled like a little fairy, and a thoroughly charmed Lionel called her “magical” and told her, “I love your whole being.” She showcased what Katy called a “very commercial voice, sweet and pleasing, wonderful to listen to,” but both Katy and Lionel warned her that she’d need more growl and gravitas to go up against some of this season’s bigger, bolder power-singers. Luke wisely advised Elli to test her full voice and “get out of the safe space” of her falsetto. If she can do that, she could be unstoppable.

This former Virginia Tech football player only started singing in public in July 2021, after he forced himself to perform at his grandfather’s memorial service, and he’s only played a handful of gigs since then. But several of his TikTok videos have gone viral, which is understandable: The guy possess a resonant, extremely recordable country voice. Talk about commercial! “I’m already thinking about marketing you,” Katy quipped. But Luke warned Dan that even though he’s “one of the best-sounding country artists” this season, he’s “not doing all the emotion properly.” Luke again offered some sage advice, suggesting that Dan ditch the guitar and focus on his delivery. If Dan does that, he could be unstoppable too.

After being bullied all his life and turning to music as his “safe place from doubters and haters,” this gentle giant was too shy and scared to pursue his Idol dream. But then his local ABC affiliate in Houston surprised him with a chance to try out. Picking a song for the Black community, Douglas awed the judges with one of the best auditions in the series’ history. There was absolutely stunned silence in the room, followed by a standing ovation; at first the judges were speechless, and then they simply couldn’t stop raving. “I blanked out, passed out, woke up. Young man, that was superb,” gasped Lionel. “You’re a superstar. You transcend time and space. You froze the room. That was iconic,” said Katy. “You hypnotized us. You just took us on a journey,” added Luke. A big group hug, a golden ticket, and of course slots of tears ensued.