Ex-Manchester United youth footballer, 18, is locked up for eight months after he tried to outrun police in a 98mph chase when they caught him using a mobile phone at the wheel 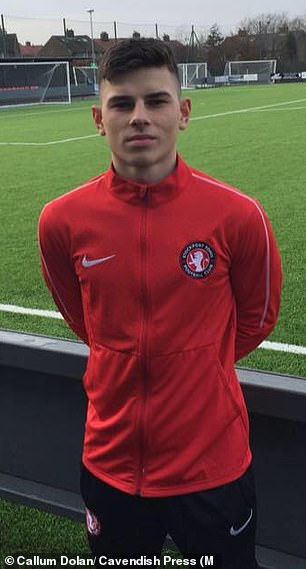 A former Manchester United footballer has been locked up for eight months after he was caught using his phone at the wheel – then he led police on a 98mph chase.

Callum Dolan, 18, was once an academy player for the Premier League team but signed for League two club Oldham Athletic in August.

Nine days after joining his new club, Dolan – who was already banned from driving following another offence – was seen texting at the wheel as he drove through Ashton-under-Lyne.

When police tried to pull him over, he sped off and tried to get away. He then crashed his car into railings and ran off before being chased down and arrested.

This week, the teenage midfielder admitted dangerous driving and driving whilst disqualified and now faces being sacked by his club before he is released from a young offenders’ institution.

Mr Johnstone added; ‘He didn’t have the best upbringing. He was abandoned by his mother aged four and that left him the care of his father who was an active criminal who took young Callum on jobs with him from time to time.

‘Although he may not have discussed it with detail, it’s had a profound effect on him and his father ended up up in prison when he was 11. He was fostered by his uncle but due to space with property it led to him then going into care and into a children’s home at one point. But from an early age what has kept him focused has been football.’ 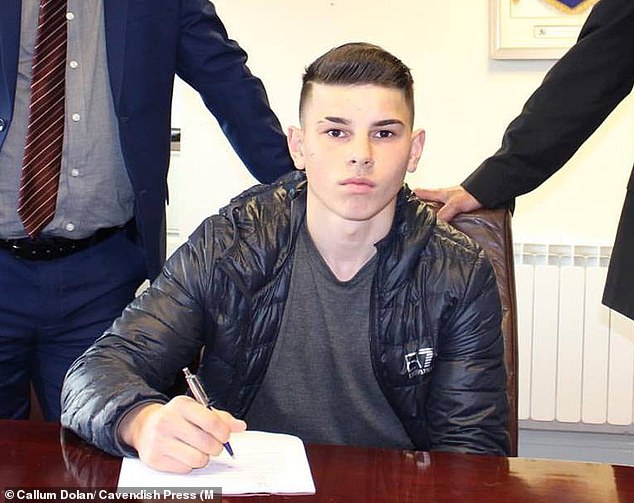 His lawyer said it was unlikely Oldham would stand by him if he was jailed, leading to ‘catastrophic repercussions on his aim to become a professional footballer’.

But Judge John Edwards did jail Dolan, telling him: ‘You are your own worst enemy. The ink was barely dry on that professional contract you signed when you attempted to out run a police BMW. It was crass stupidity and a highly dangerous piece of driving.

‘You have the whole world at your feet literally and metaphorically and I recognise you are a talented young man but driving in that way, can only mean immediate custody. I just hope the sentence I impose does not jeopardise your future.’

Dolan, pictured in his younger years, when he was a member of the Manchester United academy

The incident occurred at 11am on August 10 this year, only nine days after Dolan who left United in 2017 was unveiled as Oldham’s latest signing after a spell at Blackburn Rovers.

Justin Hayhoe prosecuting said: ‘Officers were in a patrol vehicle on the M60 at a time there was light rain the roads were slightly damp and the motorway was modestly busy.

‘The defendant travelling in lane two and three at speeds of about 75mph and the drew alongside his vehicle and noticed he was holding a phone and they could see his thumb using that phone.

‘They decided to stop the vehicle and pulled behind but the car didn’t stop and they activated their emergency equipment. The Clio then straddled between some of the lanes and accelerated at speed.

‘It moved towards junction 23 at 85mph and then went up the slip road but the defendant lost control of the vehicle and it collided with some street furniture. He ran from the vehicle but pursued and detained.’

‘During the incident the car reached speeds of 98mph on the motorway and went through a red traffic light at 72mph on the slip road. The vehicle was still moving when he ran off. When officers detained him the defendant made a number of comments saying that he was “f****d” and asking: “how long will I get?”

‘He said he knew he was being stopped because he was on his phone. When he ran away he dropped the device and he asked the officer if they had picked it up.’

Dolan who also admitted charges of having no insurance, driving without a licence and using a mobile phone at the wheel of a car was also banned from driving for two years and four months.