Britain’s former top spy has said that Donald Trump is an ‘unpredictable’ US leader who needs ‘babysitting’.

But Richard Dearlove, the former head of MI6, said that the relationship between Britain’s and its closest ally the United States is still very strong.

The US President has won a reputation for saying impulsive things and has become embroiled in a series of spats with British politicians.

Quizzed about his thoughts on the President, Sir Richard told Sky News’ Sophy Ridge on Sunday he was unpredictable.

He said: ‘He says extraordinary things, he clearly behaves unpredictably, he clearly – I was going to say he needs babysitting but that sounds a rather insulting way of talking about the President of the United States whoever it is.

‘But on the other hand I think there’s a real solidity in the Anglo-America alliance.’ 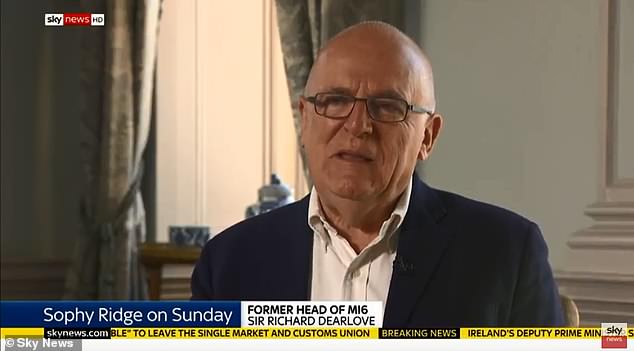 Richard Dearlove, the former head of MI6, (pictured on Sky News today) said that the relationship between Britain’s and its closest ally the United States is still very strong 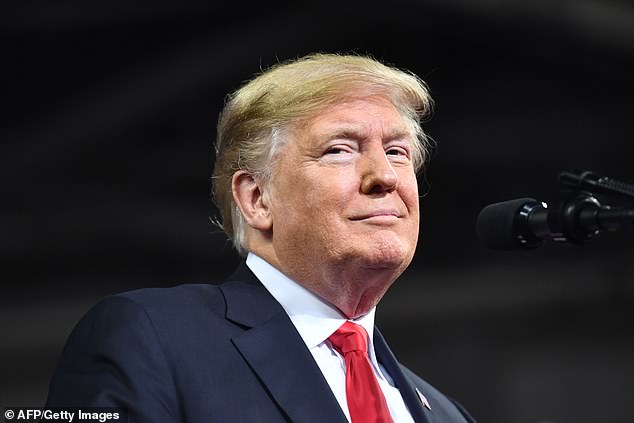 Mr Trump has had a series of clashes with British politicians since moving into the White House in January last year.

He has been embroiled in an ongoing war of words with Sadiq Khan after slamming the Labour London Mayor’s response to London Bridge terror attack – branding it ‘pathetic’.

Britain’s former top spy has warned that he finds the prospect of Jeremy Corbyn in Number Ten ‘worrying’ because of his past associations.

Richard Dearlove, the ex head of MI6, tore into Mr Corbyn for spending much of his political career supporting groups which were Britain’s enemies.

And he said that he doubts that the left-winger has ‘dumped’ his past views just because he is now Labour leader.

Mr Corbyn has been widely criticised for meeting with convicted members of the IRA and Islamic extremists.

He said: ‘Someone from my background is troubled by Jeremy Corbyn’s past associations, some of which I find surprising worrying.

‘He may have abandoned them now, but I don’t think you can entirely as it were dump your past.

‘He has enthusiastically associated himself with groups and interests which I would not say were the friends of the British nation.’

He prompted further outcry when he wrongly linked the rise in crime in England and Wales to ‘Radical Islamic terror’.

And he sparked a diplomatic row with Theresa May after he retweeted anti-Muslim propaganda put out by far right group Britain First.

The PM criticised the President saying he was ‘wrong’ to share the video, but Mr Trump hit back on Twitter.

He wrote: ‘Theresa, don’t focus on me, focus on the destructive Radical Islamic Terrorism that is taking place within the United Kingdom. We are doing just fine!’

But politicians and defence officials on both sides of the Atlantic have repeatedly said that the ‘special relationship’ between Britain and America is as strong as ever.

Sir Richard also used his interview to praise Brexit – saying he supports the UK reclaiming its sovereignty and pulling out of the Brussels bloc.

He said:  ‘I see it as an issue of sovereignty. I think that’s a very important point.

‘As I’ve said in the past, we’ve never been part of continental Europe’s political ambitions to create a more federated union, we’ve always opposed that.

‘I think the EU in its current form – I’m not suggesting it’s going to disappear but it radically needs change, and if it’s going to have an inner core which is politically motivated we’re never, ever going to be an enthusiastic part of that.’

And he said that now is ‘a natural point of divergence’ for Britain away from continental Europe, which is pushing for greater integration of the bloc’s member states.

He said: ‘I’m not underestimating the difficulties of leaving but I’m absolutely confident that we can survive and thrive outside a continental alliance but still be a major player in European geopolitics.’

What Twitter spats has Donald Trump had with the UK and why have they caused such offence?

While a Republican presidential candidate Donald Trump said there were ‘no go zones’ in London because of terrorism.

He said claimed parts of the city were ‘so radicalised’ the police force were ‘afraid for their own lives’.

The US President took to Twitter to hit out at Sadiq Khan’s ‘pathetic’ response to the London Bridge terror attack.

He sparked outrage in the UK when he tweeted: ‘At least 7 dead and 48 wounded in terror attack,’ the president wrote on his personal Twitter account, ‘and Mayor of London says there is ‘no reason to be alarmed!’

Critics pointed out that the London Mayor was saying residents should not be alarmed at the increased police presence.

Mr Trump wrongly linked the rise in crime in England and Wales to ‘Radical Islamic terror’.

The US president sent a tweet referring to figures out yesterday showing crime increased by 13 per cent last year and warning ‘We must keep American safe’.

But British MPs tore into Mr Trump for talking ‘nonsense’ and said he is ‘spreading fear and xenophobia’ by wrongly blaming the rise on terrorism.

Theresa May criticised the President saying he was ‘wrong’ to share the video.

Mr Trump hit back on Twitter: ‘Theresa, don’t focus on me, focus on the destructive Radical Islamic Terrorism that is taking place within the United Kingdom. We are doing just fine!’

He claimed that a major protest about the winter crisis in Britain’s hospitals in London at the weekend was a sign it is not a system the US should copy.

Health Secretary Jeremy Hunt hit back saying he is ‘proud’ of the NHS and no Brit wants to live in a US system where millions have no health cover at all.