Ever had the feeling you’re not wanted? Foul-mouthed graffiti is sprayed on walls of Majorcan home believed to belong to Ryanair CEO Michael O’Leary in solidarity with striking airline workers

Protesters have vandalised a Majorcan palace thought to have been bought by Ryanair boss Michael O’Leary.

Graffiti reading ‘f*** Ryan Air CEO’ has appeared on the side of a mansion in Palma’s Old Town after local papers reported it was snapped up by the controversial tycoon.

One message in large block capitals says: ‘Solidarity with Ryanair workers’ and another underneath says: ‘Michael O’Leary. You’re not Welcome.’ 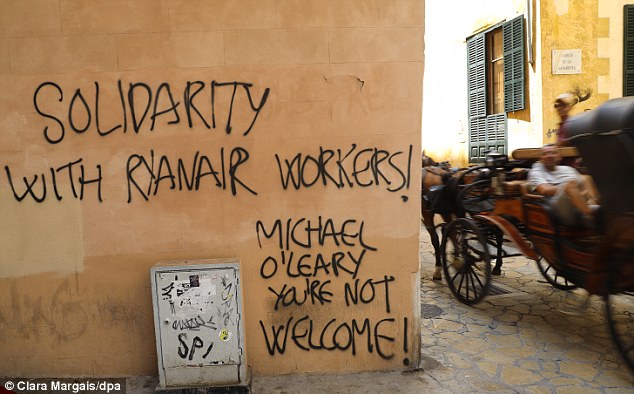 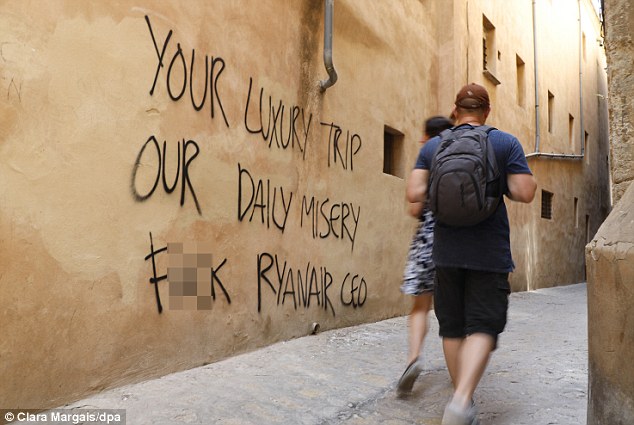 One said the Majorcan buyers had put it on the market for £16million but sold to O’Leary through a company he created in March at a knock-down price.

The reports emerged ahead of the first strikes by Ryanair workers.

More walkouts expected to affect thousands of holidaymakers are due to take place on Friday. 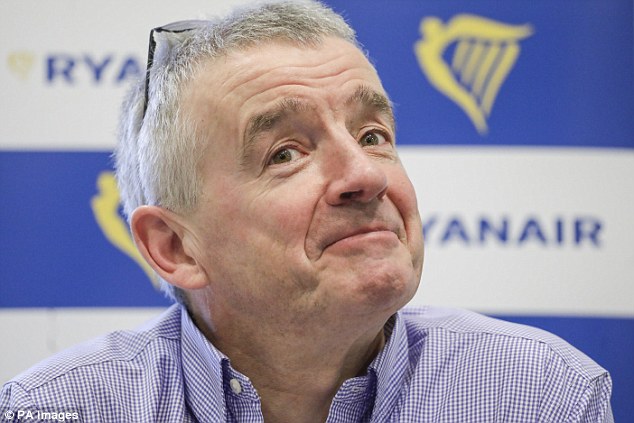 Property records indicate a well-known Irish businessman – not Michael O’Leary – is the new owner of the Palma property.

Vandals daubed buildings in the Majorcan capital Palma including a four-star hotel with anti-tourist messages in April 2016.

One on the four-star Palma Suites Aparthotel in Palma old town, written in English like most of the others, said: ‘Tourist Go Home. Refugees Welcome.’

Others carrying the same message had been daubed on walls and waste paper bins in the same area including one on a private tourism school.

‘Guiris Go Home’, the slang word the Spanish use to describe British and other northern European holidaymakers, and the more threatening slogan ‘Tourists, You Are the Terrorist.’ also left visitors with a sour taste in their mouths. Ryanair has cancelled one in six of its flights for Friday as pilots in Germany, Ireland, Sweden and Belgium get ready to hold a 24-hour strike

Ryanair has cancelled one in six of its flights for Friday, with pilots in Germany, Ireland, Sweden and Belgium set to hold a 24-hour strike at the height of the holiday season.

The Irish airline had already cancelled 146 flights for Friday as a result of stoppages planned in Ireland, Sweden and Belgium.

But with German pilots also opting to walk out, a further 250 services have also been axed taking the total to just under 400 flights, or about 17 per cent of the more than 2,400 flights it has scheduled across Europe for that day.

Although a full list of the cancelled flights has not yet been confirmed, it is believed that services from UK airports including East Midlands, Glasgow, Manchester and Stansted have been affected.

Meanwhile the Dutch pilots’ union VNV is also considering calling a strike on Friday, but has not yet decided, a spokesman said. 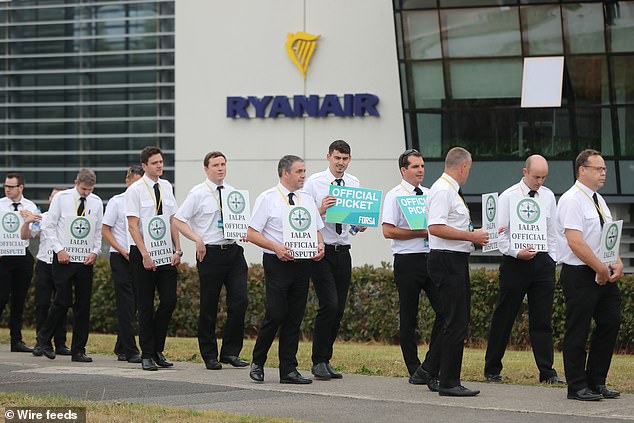 Ryanair pilots in the Forsa union form a picket line outside the airline’s headquarters in Swords, County Dublin, during a strike last month

Ryanair is going to court on Thursday to prevent the Dutch pilots from striking over the summer, the union and the airline said.

The walkout by pilots based in Germany will start at 0101 GMT on Friday, the Vereinigung Cockpit (VC) union said in a statement.

Ryanair operates more than 2,000 flights a day, serving 223 airports across 37 countries in Europe and North Africa.

Its low-cost model makes it Europe’s most profitable airline, and executives say they do not want to change that.

December 22, 2017: Ryanair is unable to avert its first ever pilots strike when pilots in Germany hold a four-hour walkout with little impact on flights.

February 10, 2018: Three Italian unions representing mainly cabin and ground crew stage a four-hour strike because they were not included in contract negotiations with Ryanair.

March 29, 2018: Ryanair cancels dozens of flights to and from airports in Portugal when cabin crew union SNPVAC staged three one-day strikes on March 29, April 1 and April 4.

July 12, 2018: Around a quarter of Ryanair’s 350 pilots bases in its home country of Ireland go on strike for the first time in a push for better conditions.

July 25 and 26, 2018: Cabin crew in Italy, Spain, Portugal and Belgium stage a two-day strike that forces Ryanair to cancel the flights of more than 50,000 customers.

July 30, 2018: Ryanair pilots in Germany overwhelmingly vote to strike and give the airline until August 6 to make a better offer after talks on a collective labour agreement ended without the progress the Vereinigung Cockpit pilot union sought.

July 31, 2018: Pilots in the Netherlands back the Dutch Airline Pilots Association call for industrial action in a vote the unions calls a necessary ‘wake up call’ in negotiations.

August 3, 2018: Irish pilots plan a fourth one-day strike, causing Ryanair to cancel 20 flights. The airline has already responded to the Irish action by making good on a threat to move jobs away from any bases impacted by the stoppages, beginning with Dublin where it cut its winter fleet by 20 per cent last week.

August 10, 2018: Ryanair pilots in Sweden are set to strike, citing management’s failure to meet union representatives for more than eight months. Unions in Belgium have also called on pilots to strike on the same day. Irish pilots will also stage their fifth 24-hour strike. Pilots in Germany are also set to join the 24-hour walkout.