Surabaya: Indonesia's second-largest city has been hit by another suicide bombing by Islamic State-inspired militants, with four men on two motorcycles launching a strike on police headquarters in the city and causing casualties.

Indonesian police have confirmed the four perpetrators all died in the attack on Monday morning, but a child travelling with them had survived. Footage of the child being rescued by police was being widely shared on social media.

Earlier, police said that that four officers and six civilians have been wounded in the bomb attack. 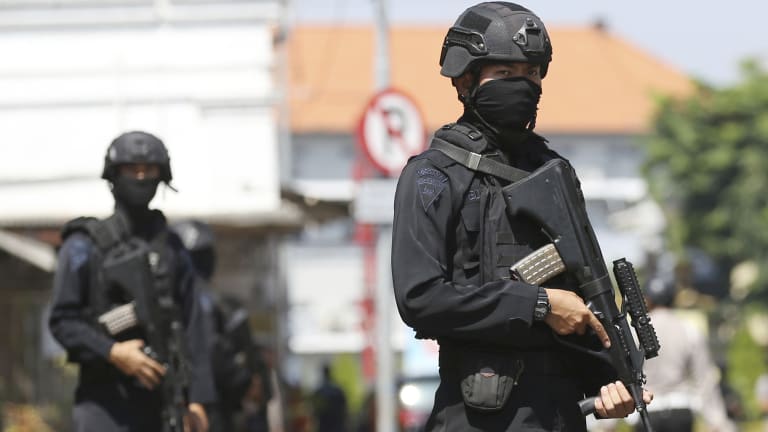 It comes just a day after a family of six suicide bombers launched coordinated attacks on three churches in the city. The youngest attacker was a girl aged just nine years old and the death toll from those attacks has now risen to 17.

Another blast late on Sunday night on the outskirts of Surabaya in an apartment building in Sidoarjo was also related to the other bombings, police said.

"The bombs [in the churches] were of the same type, namely pipe bombs, but the contents are slightly different. The basic material is TATP [triacetone triperoxide]– it’s known to ISIS in Syria and Iraq …TATP is also known as the 'mother of satan' because it’s very dangerous," he said.

Tito said the attacks in Suarabaya had been carried out because "there was direct instruction from ISIS in Syria to carry out attacks whenever possible since they are cornered now".

The explosion in Sidoarjo had been an accident, he said, and had claimed the life of a man known as Anton, as well as his wife and child.

Anton had been a close friend of Dita, who had committed one of the church attacks, Tito said, and pipe bombs similar to those used at the church had been found at the apartment.

In total, 13 people with links to JAD are now dead – six at the churches, four at the police station and three in the apartment building. 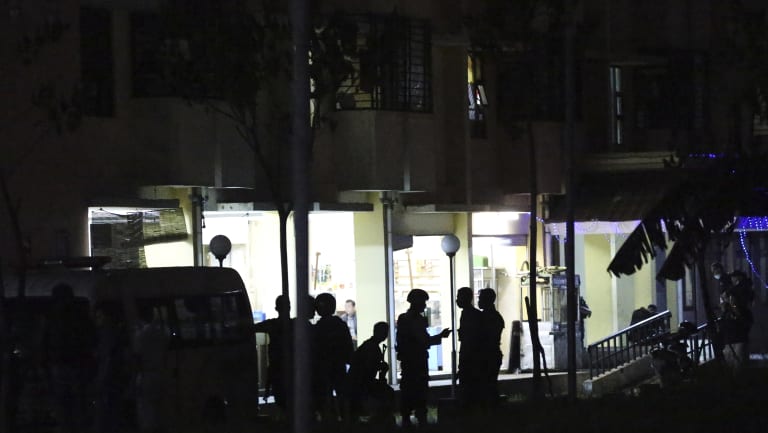 Indonesian police stand guard in front of an apartment building after an explosion.

Horrific CCTV footage of the attack is circulating on social media. It shows the four men arrive at a security gate on two motorcycles in front of police headquarters and then a blast, moments later, as the bomb detonates.

Soon after the attack on police headquarters, and as a crowd gathered, police detained a man in the crowd and questioned him over the contents of his backpack.

Indonesian President Joko "Jokowi" Widodo said the attack on the police station was an act of cowardice and uncivilised act. 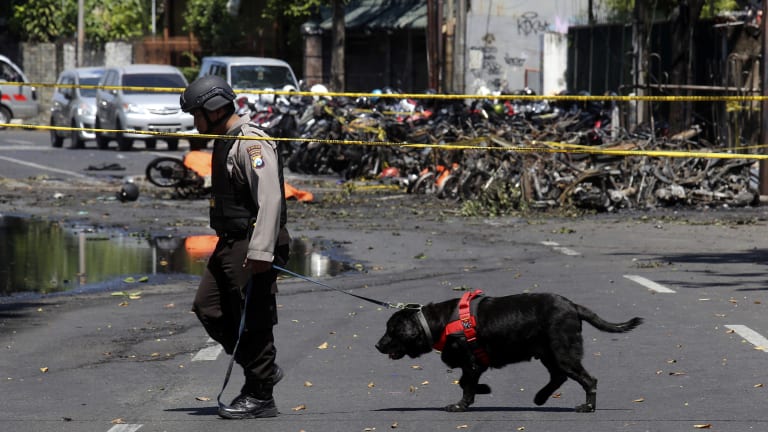 An officer leads a sniffer dog at one of the sites of church attacks in Surabaya.

"I repeat we have to fight terrorism, we will fight them to their roots. I have instructed the police chief to take firm action, no compromise when taking actions in the field to stop these terror actions," he said.

The President said he had asked parliament, and the relevant ministers considering new anti-terrorism laws, to finalise those laws when parliament sits again on May 18.

"It’s the legal umbrella for the police to take firm action to prevent [terrorism] and to act. If by June it is not finalised, I will issue a presidential decree," he said.

Following the Surabaya church attacks, almost all cities in Indonesia increased security and alertness including Bali and Maluku (where sectarian conflicts started in 1999 and went on for a few years).

Houses of worship of all religions, public areas such terminals, airports, malls are under being guarded. 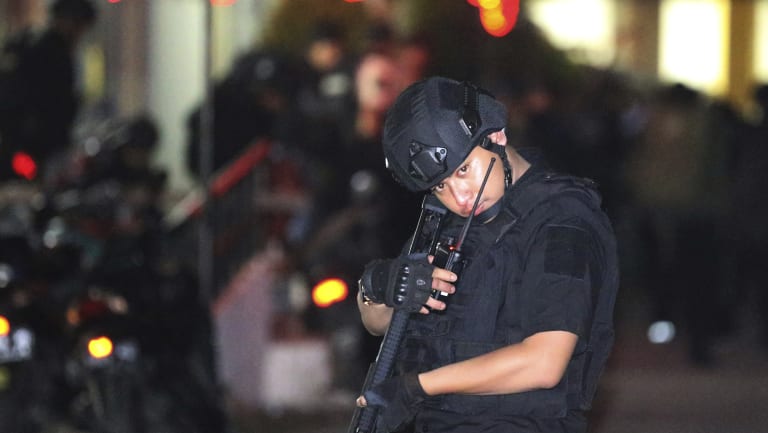 An Indonesian police officer stands guard in front of an apartment building after an explosion in Sidoarjo, East Java.

Schools in Surabaya city are closed for a day on Monday, May 14.