A diving expert narrowly avoided a chomp from a tiger shark just as she was preparing to enter the ocean off the coast of Haleiwa, Hawaii.

Cameras captured the moment marine researcher Ocean Ramsey was about to dive into murky, shark infested waters on Wednesday in the island of Oahu after spotting a shark bumping into plastic pollution.

Just as she’s ready to drop in, the diver takes one last look into the choppy waters and is greeted by Queen Nikki, a prominent tiger shark in the area.

Ramsey quickly pulls herself back on the boat as Nikki pops out of the water, attempting to take a bite of the researcher’s flippers.

Rather than be startled, Ramsey laughs off the incident, quickly identifying the shark by name and continuing her dive to locate two other large, female sharks in the water.

‘I saw a shark bumping some floating plastic so I rushed in and this was my greeting,’ Ramsey joked about the encounter on Instagram. 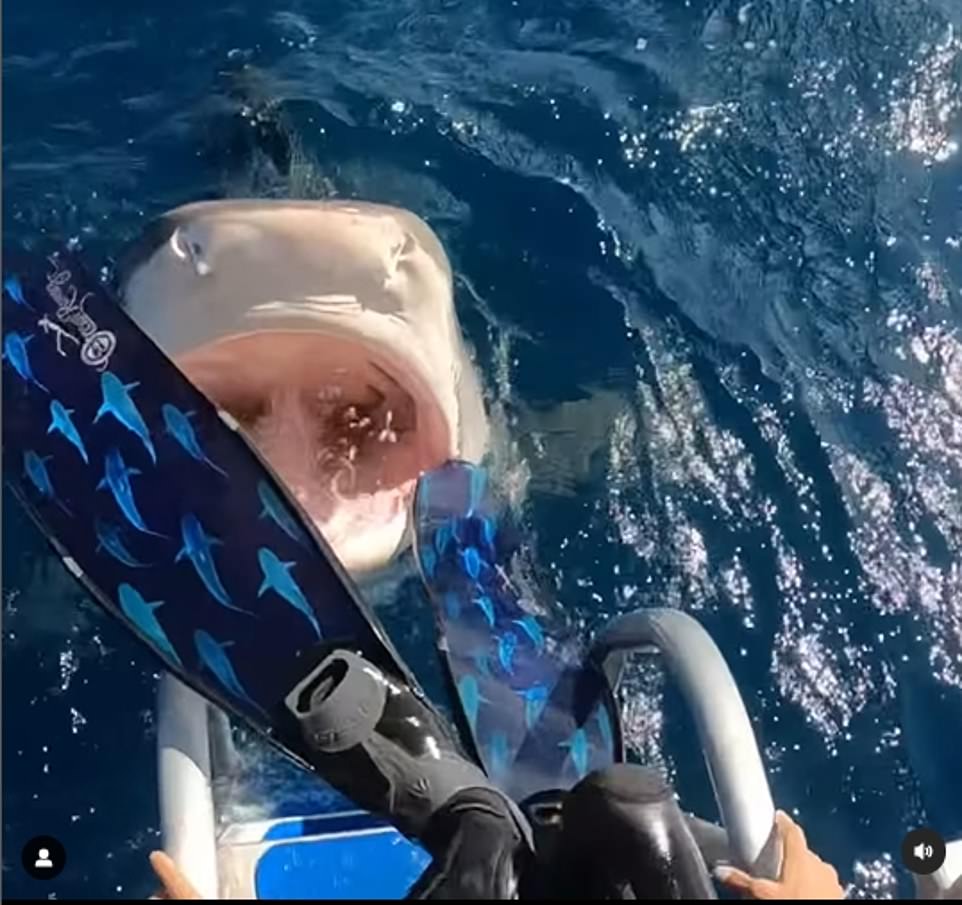 Cameras captured the moment Ocean Ramsey, a marine researcher, narrowly avoided a bite from one of her favorite tiger sharks, Queen Nikki (pictured), on Wednesday 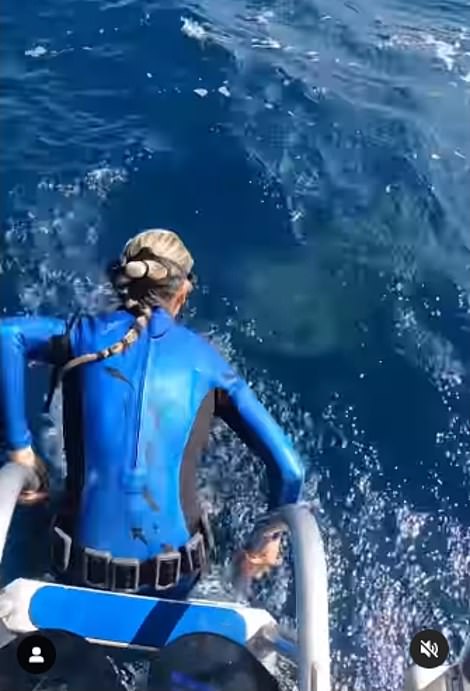 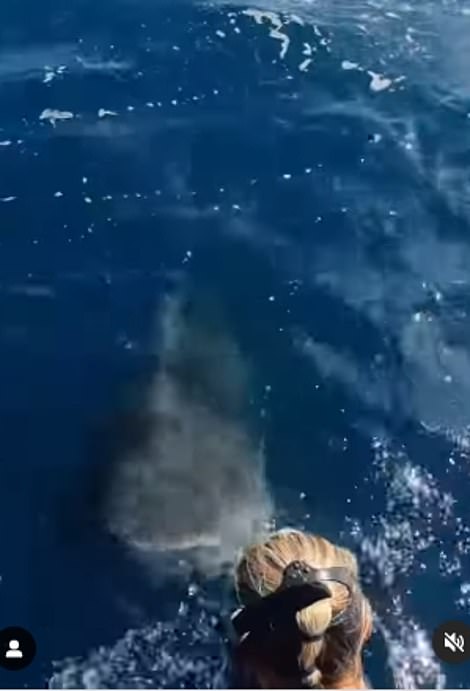 Before diving in to help a shark, Ramsey took a quick look into the water, where Nikki had been lurking 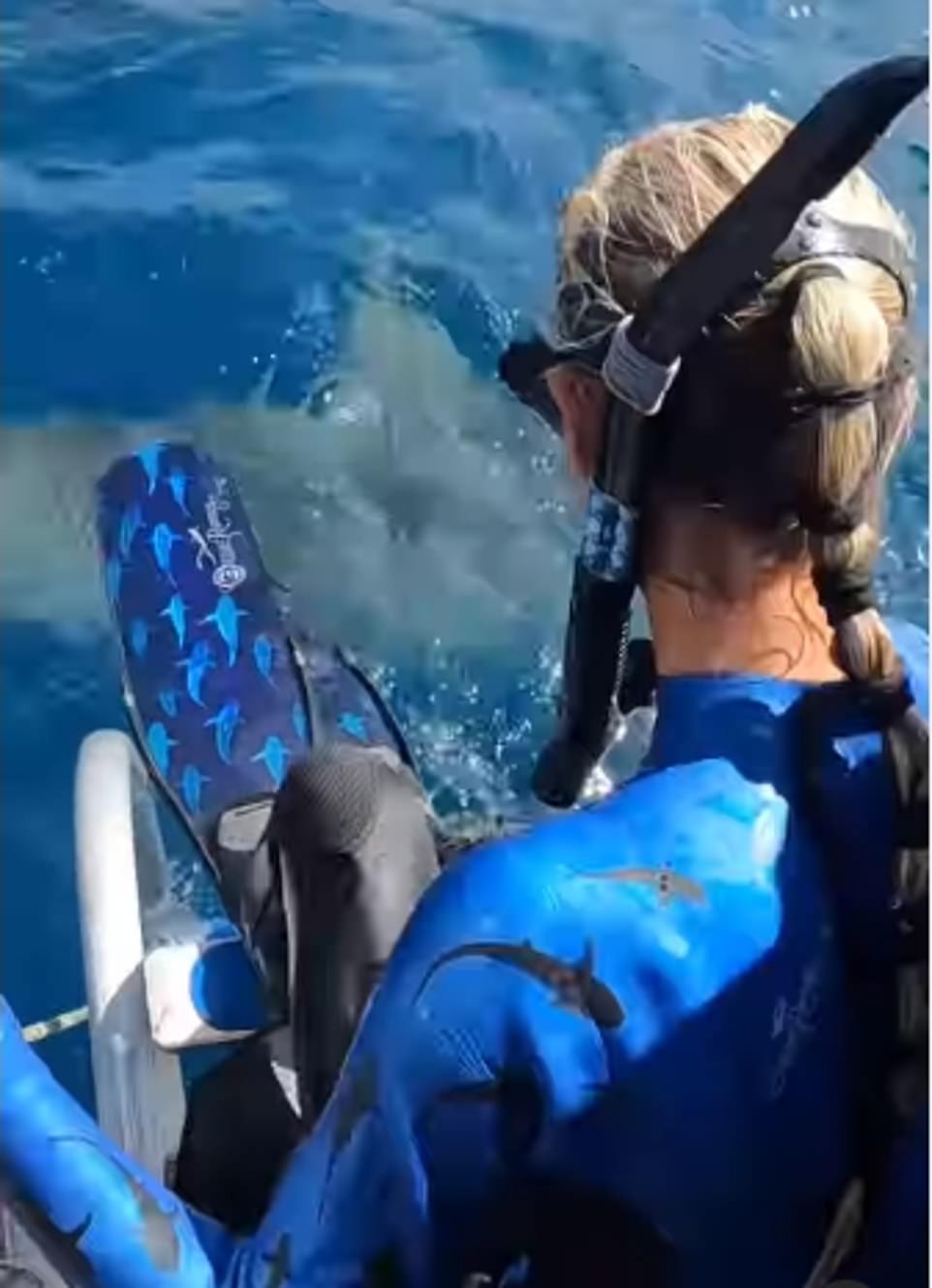 Ramsey, CEO of the OneOcean Diving conservatory and education group, said Nikki, who she was worked with for years, likely didn’t mean to try and bite her.

‘I couldn’t see very far and I don’t think they could either, so I think [Nikki] was reacting more from my initial noise entering and shadow,’ Ramsey explained on social media.

‘I always love seeing their white belly coming up from the depths and in this case it’s what gave her position away so she was actually easier to spot coming up vertical compared to the others already near the surface.’

Ramsey said that it is rare to see sharks do this ‘spy hop,’ where the apex predators poke their heads out of the water to check the surface during murky conditions. 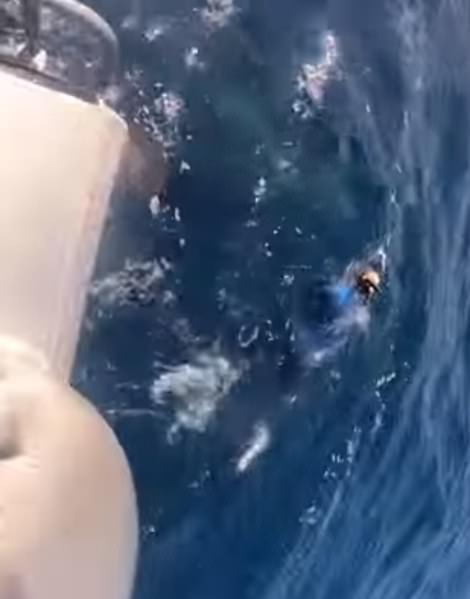 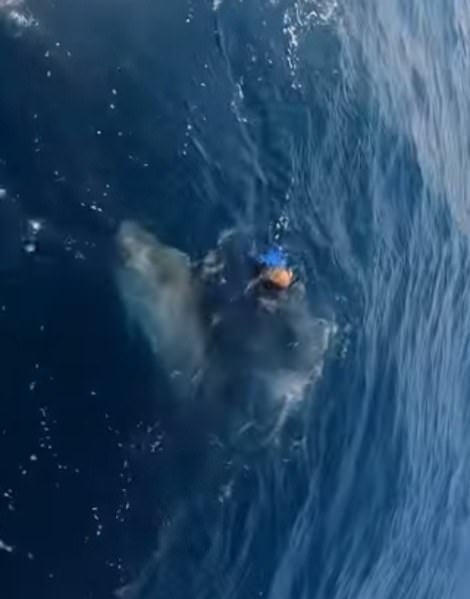 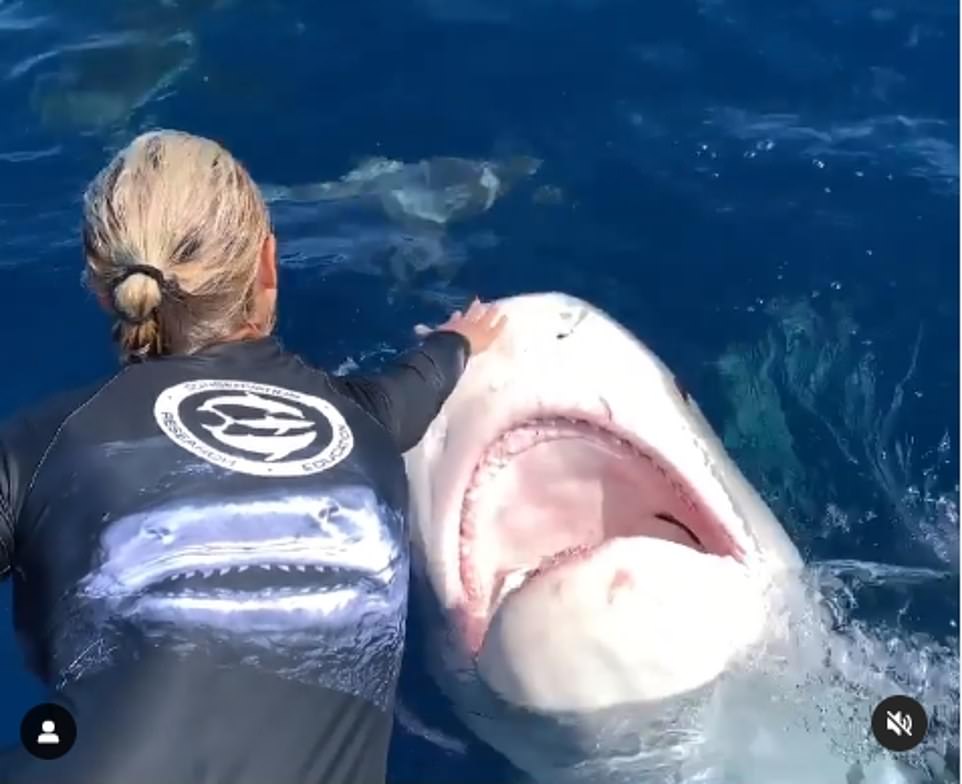 Ramsey said Queen Nikki was her favorite shark swimming in Hawaii. She is pictured petting the tiger shark in 2020 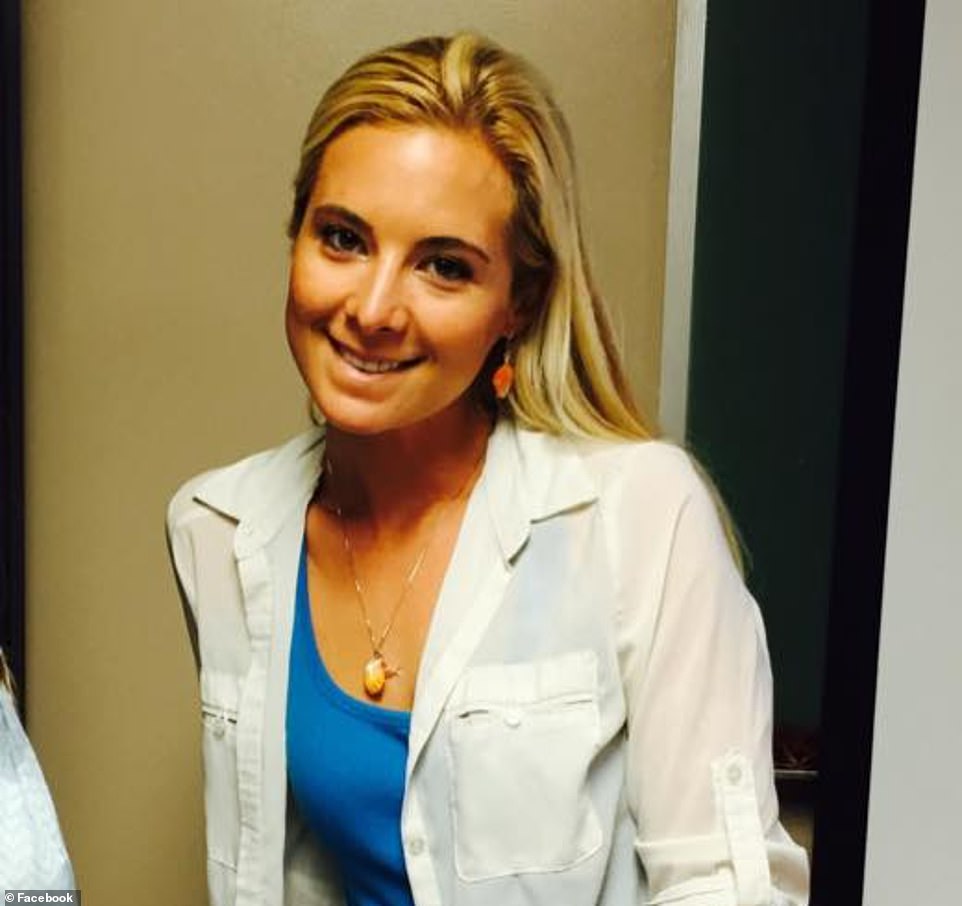 I LOVE this old Tiger Shark Queen Nikki (Ali’i Nikole) Large sharks will sometimes bite props and metal ladders or poles that conduct electricity into the water, usually its an investigatory checkout due to the attraction from the electro-receptive organ called the Ampuallae of Lorenzini, an initial check (bump or bite) or two and they usually stop. In this video I gently lift her nose so she doesn’t run into the boat, but as you can see she still bites the ladder to test it out. This is why we require people to keep their GoPro’s and small electronics on poles, away from their hands, in case a smaller species wants to hone in on the electrical output. Larger species are actually easier to deter with a gentle redirection but of course ***Disclaimer***Please dont attempt to replicate, and if you are in the water and a large shark approaches you, please push down on top of the head, dont apply any pressure below the nose or snout as you can see the natural reaction is to lift away from the pressure and I needed to do this to keep her from running into the ladder, we trimmed the engines up and after a couple checks went back in to have a beautiful dive where Ali’i Nikole (Queen Nikki) was actually quite shy once she saw us looking around at her. Learn more @oneoceandiving @oneoceanresearch Filmed by Mr. @Juansharks who designed this Rashguard “Shark smile” from one of his photos. Available @oneoceandesigns #sharksmile #learnaboutsharks #sharksandmetal #sharksandelectronics #sharksandcameras #sharkgopro #sharkdeter #sharkredirect #sharkdeterrent #oneoceandesigns #sharkrashguard #shark #discoversharks #nature #aloha #sharkidnikki

She noted that sharks are additionally attracted to cameras because of their electro-receptors, so Nikki, also known as Ali’i Nikole, was likely drawn to their boat filled with recording equipment.

The close encounter with Nikki comes during the North Pacific’s ‘Shark-tober’ season, where more of the predators are seen along the Pacific shores amid pupping and mating season.

Ramsey said that as tiger sharks don’t have the best vision to begin with, the conditions causes them to swim closer to the surface, increasing the likelihood of a run in with the predators.

According to the Hawaii Department of Land and Natural Resources, there have been four shark attacks recorded this year, with two taking happening in September. The number of incidents are down by half compared to last year.