A makeup artist who offers nipple tattoos for breast cancer survivors says photos of her work have been banned by Facebook – for being pornographic.

Kerry Irvine, 36, of Bromsgrove, Worcestershire, has been helping women who have had mastectomies with the 3D inkings for the past five years.

But she is now at loggerheads with the social media giant which keeps removing her photos for violating their community guidelines on sexual content and pornography. 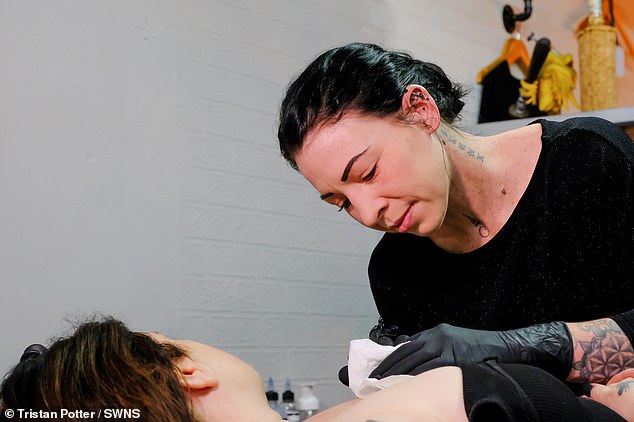 Kerry Irvine, 36, has had several pictures of her work tattooing breast cancer survivor’s nipples banned from Facebook for violating community rules on sexual content and pornography

Kerry says her work has changed the life of her customers and made them feel more feminine following surgery, helping them recover both emotionally and physically.

She has posted photographs of tattooed nipples on social media in a bid to promote her services but the images keep being removed.

Her business page has also been suspended several times and she has been blocked out of her personal account for displaying ‘sexual content’.

Kerry, who works at Modern Electric Tattoo Company, explained how when Facebook ‘detects a photo of a breast, they take it down because hit it violates their guidelines and I totally understand that.

‘But what they need to do is look at the context and in this case it isn’t pornographic.

‘We’re not doing this in a sexual way, It’s purely to help people who have gone through this awful thing in breast cancer. 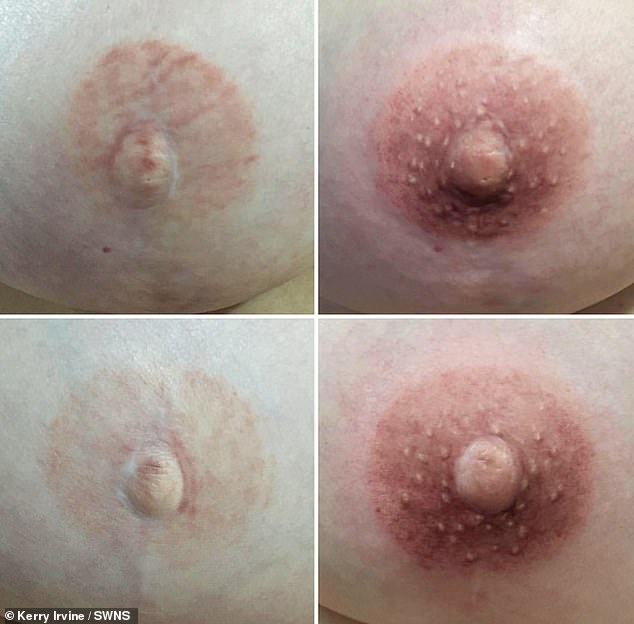 The artist has been doing the nipple tattoos, pictured right with the areolas before inking left, for the past five years and charges £100 per nipple

‘The really strange thing is some that I have posted over the last couple of years have stayed up and then there are others that have been recently taken down.

‘I’m just curious as to why they allow one picture and the next picture and then all of a sudden, I’m banned for 24 hours and I can’t even use my personal Facebook. 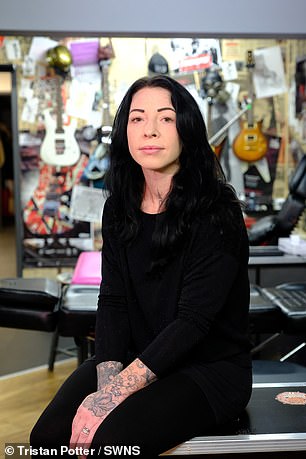 Kerry, pictured, said she’d like Facebook to look at her pictures with the context of her being an artist who does mastectomy work

‘It’s just a bit silly. They need to look at pages like mine and say “well, actually this is an artist who does mastectomy work” and validate myself and others who do this.

‘Some people could find them offensive due to the background or religion at seeing a breast, but it’s actually just promoting what we can do to help people. It’s a really positive thing.’

The artist, who lives with her husband Matthew Taylor, 39, an emergency care practitioner and their son Max, two, started tattooing 15 years ago.

However Kerry, who is originally from Barrow-in-Furness, has only been doing areola tattooing since 2014 and charges £100 per nipple.

She said: ‘When I was first approached by a customer called Kelly, I had never done one of these tattoos before.

‘She just said, ‘well, can you try?’, so I did and the traction it got was just amazing. I didn’t expect it at all. 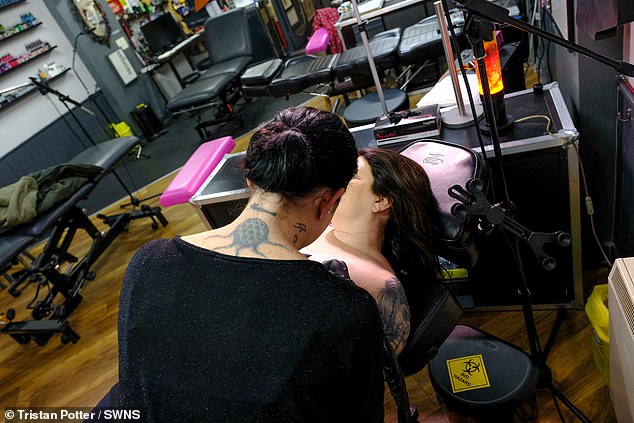 When her work, pictured in action, was being taken down Kerry said it was hard to get word out to potential clients as they wanted to check out her tattoos but couldn’t see many pictures

What is a mastectomy and what is breast reconstruction?

A mastectomy is an operation to remove a breast.

After the operation it can take four to six weeks to recover.

Breast reconstruction can be done months or years after a mastectomy.

Some people decide to have a breast reconstruction during the same operation while others wait until later.

Those who have it immediately tend to have less scarring and a small patch of skin where the nipple was, with a scar around it.

During reconstruction a plastic surgeon creates a breast shape using an artificial implant, a flap of tissue from another place or both.

Nipple reconstruction tends to be done 4-6 months after the breast.

After the shape is built, the area can be tattooed to give a more natural colour.

Silicone nipples which stay in place for three months are also available.

‘However, after about two days, Facebook took down a photo I had uploaded of the artwork for violating community guidelines.

‘It’s been really hard to get my work out there ever since.

‘People are trying to see photos of my work, but because it keeps getting pulled down, they’re not able too.

‘Just trying to get it out there to women that they can have this permanent procedure by an actual artist is proving really tough.’

Kerry says she has lost count of the number of tattoos she has done for women who are going through breast reconstruction but thinks it could be in the hundreds.

She said: ‘It’s amazing doing this for them. There are massive smiles, tears and it’s quite overwhelming.

‘You are with these women for a good period of time, doing the tattoo, so you get the backstory.

‘You form this sort of bond and talk about things that they probably wouldn’t talk about with, other people and even their partners.

‘It’s just giving them confidence back. They often say, “Oh my god, I can’t wait to show my husband or show my partner”. To see the look on their face, it’s incredible and really humbling.’ 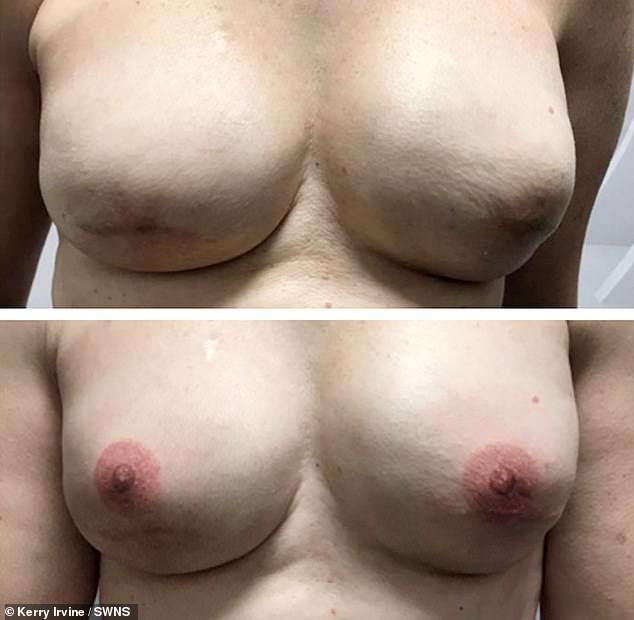 Kerry said tattooing nipples for women who have had a mastectomy is ‘amazing’. Pictured is a woman before, top, and after, bottom, having nipples tattooed by Kerry

This version, which can often fade away as quickly as three months, is done by nurses and not professional tattooists.

Kerry added: ‘I would be so chuffed if the NHS approached me and said, “Kerry, we would love you to work alongside us”.

‘It would be lovely to say it’s part of your reconstruction and you don’t have to pay for it. I do believe that it costs the NHS a lot more than what I’m charging per patient. 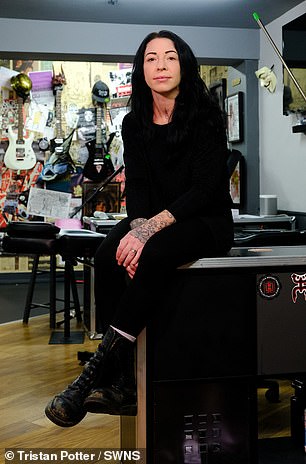 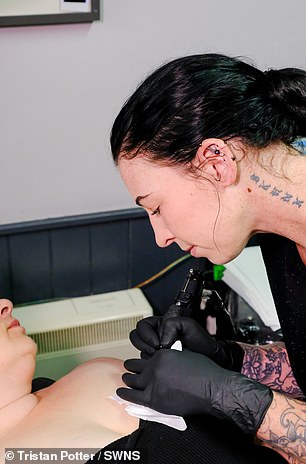 Mother-of-one Kerry, pictured left and right while tattooing, said ‘it’s incredible and really humbling’ to see the look on a woman’s face after her nipples have been recreated 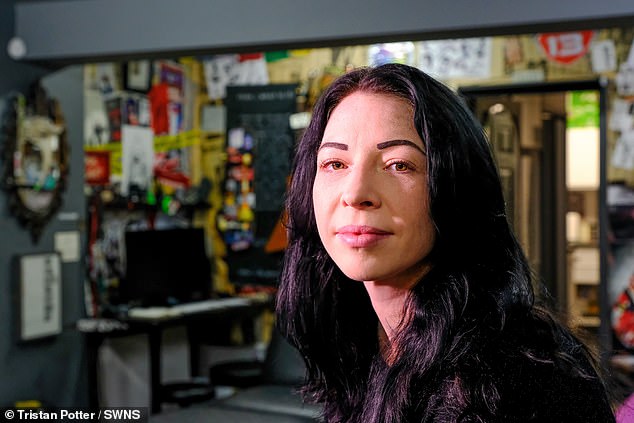 ‘Imagine if you could actually save money for the NHS as well so they can put that into a different area or better equipment.

‘A lot of women don’t even know it’s an option but this is something really, really close to my heart.

‘This isn’t about me but it is about the men and women who have battled cancer and just letting them know what can be done.’ 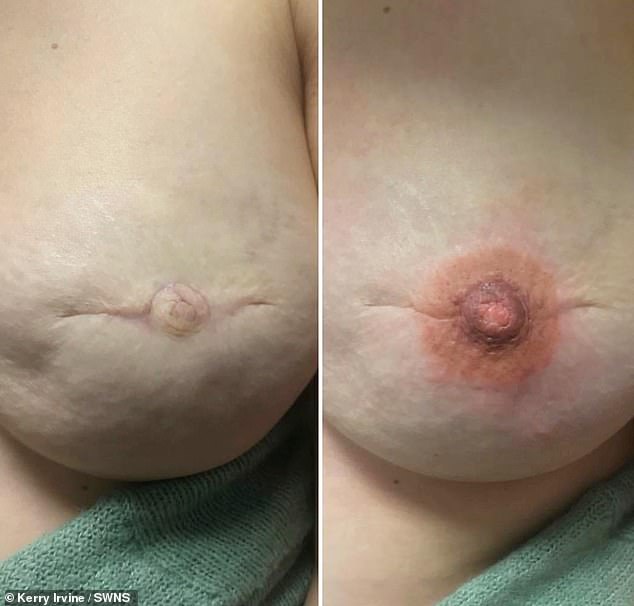 Tattooing nipples is close to Kerry’s heart as she lost a good friend to cancer five years ago and her granddad also had breast cancer. Pictured is a before, left, and after, right, picture of one of Kerry’s clients