Activists said it was an attempt to disperse the weeks-long protest outside the Defence Ministry.

A medical association affiliated to protesters said at least one person has been killed and several were injured in the raid, which is still in progress. 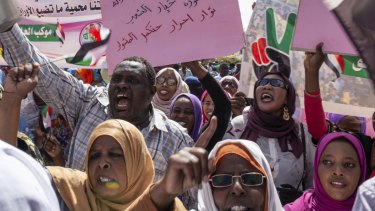 Protesters carry posters in Arabic that say, “Freedom, justice, and peace, and the revolution is the choice of the people,” at the sit-in outside the military headquarters, in Khartoum, Sudan.Credit:AP

"The protesters holding a sit-in in front of the army general command are facing a massacre in a treacherous attempt to disperse the protest," the main protest group said in a statement, urging the Sudanese people to come to their rescue.

Live images broadcast by Arab television stations showed tents used by the protesters on fire, as other protesters ran away from the scene.

An Associated Press journalist saw smoke rising from the area and civilians being detained. 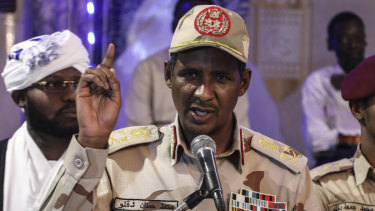 General Mohammed Hamdan Dagalo, better known as Hemedti, deputy head of the military council that assumed power in Sudan after the overthrow of president Omar al-Bashir.Credit:AP

Tens of thousands of protesters have been camped outside the military's headquarters, the epicentre of Sudan's uprising that led to the military overthrow of president Omar al-Bashir.

The protesters are calling for "limited military representation" in a sovereign council that would lead the country as it transitions to civilian rule over three years.

Both sides are split over the makeup and leadership of the council, with the ruling generals refusing to relinquish power and the protesters vowing to stay put until the council is in place.