Family of a soldier, 19, who was killed by the IRA in the Guildford pub bombings slam the decision to DENY them legal aid for her inquest as a ‘travesty’

Relatives of a soldier who was killed in an IRA bomb 40 years have said her memory is being ‘betrayed’ by the government after they were denied legal aid for her inquest.

Ann Hamilton died in the Guildford pub bombings in 1974 aged 19, one of five to die among 70 injured in the attack.

Eleven people – the Guildford Four and Maguire Seven – were wrongly-jailed in what became known as one of Britain’s biggest miscarriages of justice and it was announced earlier this year the inquest into the deaths would be resumed.

Surrey coroner Richard Travers said recently he had written to the Legal Aid Agency in support of the family’s application for funding, but it was not ‘within his gift’ to grant it.

The Ministry of Justice has said the coroner can ask questions of witnesses on behalf of families.

But today Ann’s sister Cassandra Hamilton said Ann had been training to protect her country but was now being ‘betrayed’. 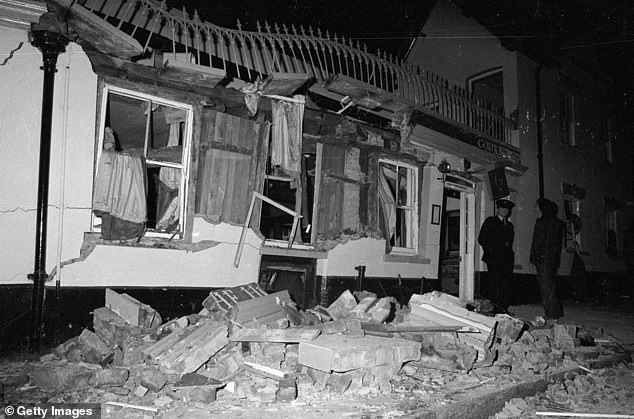 The aftermath of an IRA bomb at the Horse and Groom pub in Guildford, Surrey, in 1974

Ms Hamilton told the BBC the decision came at ‘a very emotional time’, adding: ‘Our sister Ann was training to protect her country.

‘Now she is being betrayed by the government and the political process she would have been protecting.’

She said both Surrey Police and the Ministry of Defence had representation for the inquest, paid for by taxpayers, but added: ‘We as a family are contributing to them yet we get nothing because civil servants have decided we do not need legal representation.’

She said she needed answers about what happened on the night her sister was murdered and for that the family needed independent, legal representation.

KRW Law, a firm of solicitors which has supported the victims of the Guildford and Birmingham bombings, said it was possible to continue to work pro bono. 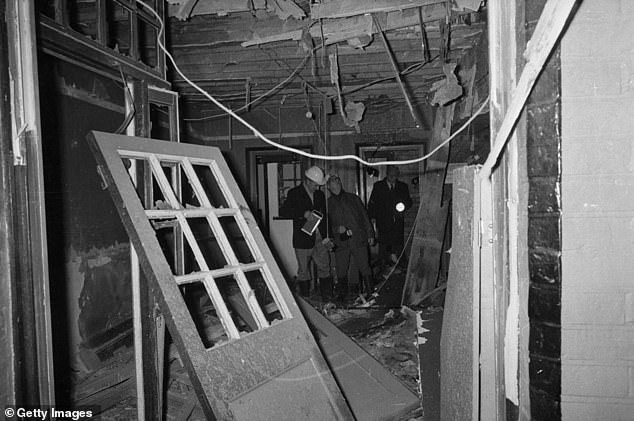 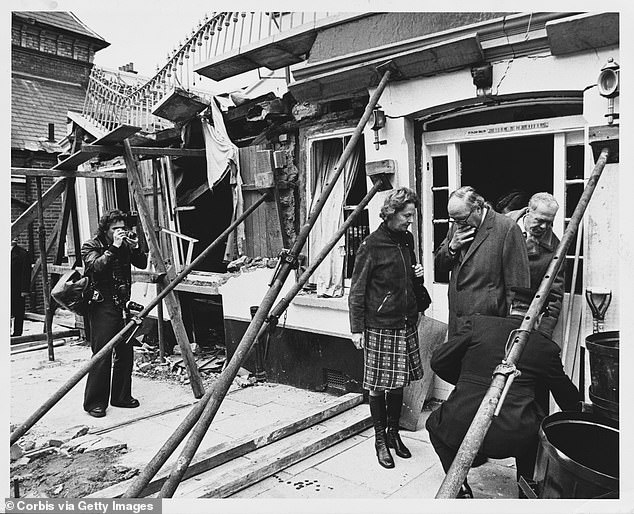 Home Secretary Roy Jenkins and Commander Huntley of the Scotland Yard bomb squad inspect the site of the Horse and Groom pub in Guildford, which was one of two pubs in the town in which the I.R.A. planted bombs. The explosions killed five people and injured sixty five, including 43 army personnel from nearby camp

Kevin Winters, from KRW Law, said the refusal followed a battle by the families of the Birmingham pub bombings for legal aid following four years of pro bono work on their behalf.

He said: ‘Our firm cannot sustain pro bono assistance in this matter following our commitment to the Birmingham families.’

He said the Hamiltons, and the family of survivor Yvonne Tag, would be ‘effectively excluded’ without a lawyer present leaving the proceedings ‘a travesty’. He vowed to appeal to the lord chancellor and home secretary

A Ministry of Justice spokeswoman said: ‘Our thoughts are with the families of the victims of the Guildford pub bombings as the inquest resumes.

‘They will be fully supported by the coroner who can ask questions on their behalf to help ensure they get the answers they need.’

A date for the full Guildford pub bombings inquest has not yet been set.