Family slam ‘claustrophobic and airless’ £2,400 London quarantine hotel which gave their children, one and four, food poisoning during 10-day stay

A mum has shared her family’s ‘awful’ experience in a hotel quarantine in London – claiming the food gave her two young children a vomiting bug.

Puneet, 39, and wife Priyanka, 37, from Edinburgh, travelled to Chhattishgarh in India to attend Priyanka’s mother’s funeral after she sadly died in April.

They arrived on 17 April with their four-year-old daughter Preet and 13-month-old son Parth.

The family flew back to London on 4 June and made their way to the hotel Corporate Travel Management had booked for their 10-day quarantine, the Park Plaza in Waterloo, at the price of £2,400.

But the family say the experience was a nightmare from start to finish.

Priyanka and Puneet claim families were only allowed 15 minutes of fresh air per day and were otherwise stuffed into a ‘claustrophobic’ room with their children and offered meals that gave their kids food poisoning.

Upon arrival, they were asked to select food choices for the duration of their stay, with options including Thai curry, vegetable biryani and moussaka. 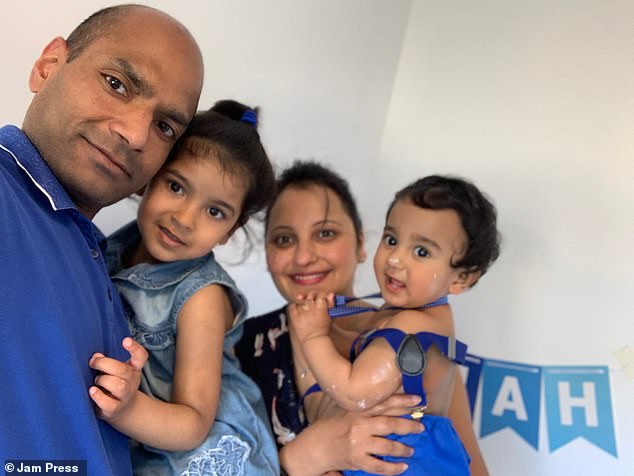 Puneet, 39, and wife Priyanka, 37, from Edinburgh have shared the nightmare tale of their quarantine hotel experience 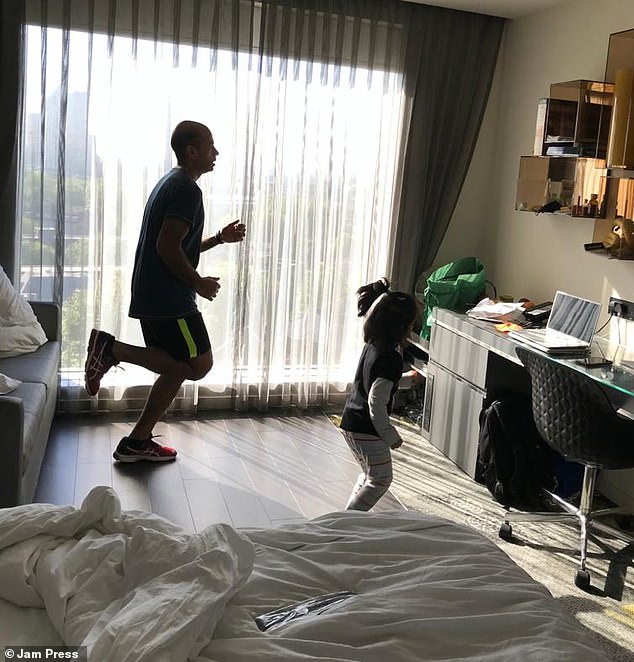 Priyanka asked for choices more appropriate for the small children but was told none were available – despite paying £2,400 for the enforced hotel stay.

Priyanka said: ‘When we expressed displeasure over the food on one occasion when it arrived after 8pm and was too spicy for the babies, we were told “sorry that’s what we have”.’

Despite the food issues, and finding their room ‘claustrophobic’ and ‘airless’, the family was determined to make the best of their stay. 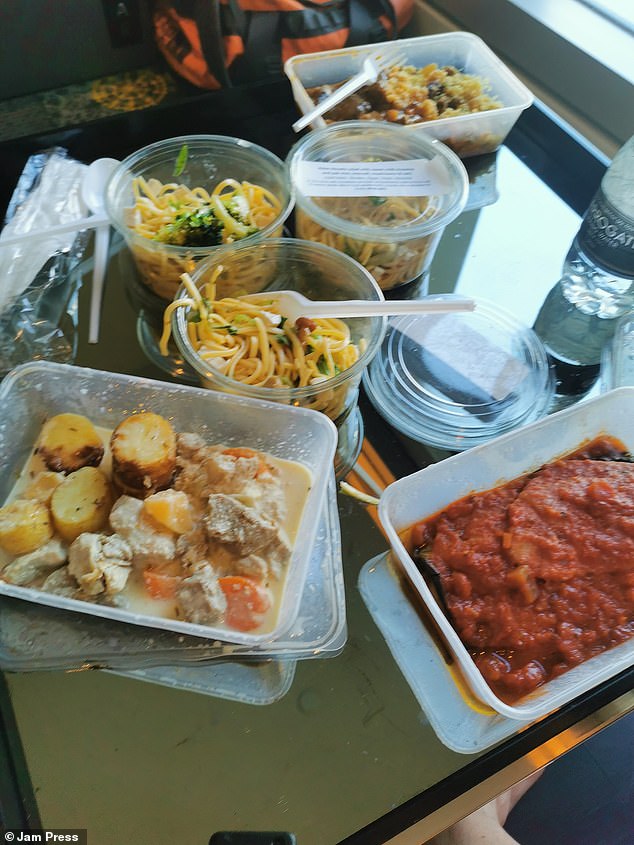 Upon arrival, the family were asked to pick food choices for the duration of their stay, and say they were not given meals ‘appropriate’ for young children

The couple entertained their children as best they could; playing games of skittles with empty bottles and brown paper bags and exercising in the room.

They were only allowed 15 minutes a day on the hotel terrace for some fresh air – which was the daily highlight of their stay.

Priyanka said: ‘Our room didn’t have an open door, just big glass windows so we could see people outside eating and drinking, but we didn’t have any fresh air.

‘It was really tough and we would look forward to going out for our break each day.’

The mum found she couldn’t even grieve the loss of her mother, focusing her energies on keeping her children occupied. 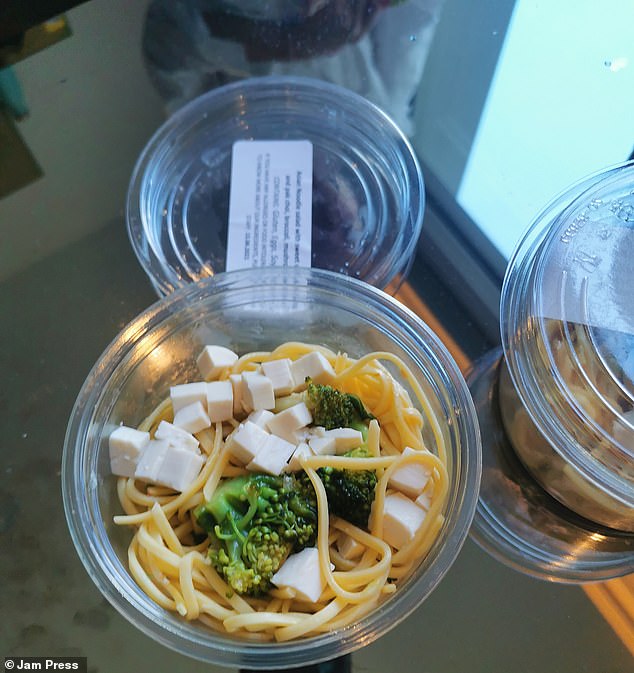 Priyanka said: ‘My baby started vomiting and we were scared because it kept happening.

‘We called the on-site medic who advised we call 111 and another doctor came.

‘She asked if Parth had eaten the tomato soup for lunch, which he had.

‘She said the food was too rich for his age – the soup was very concentrated – or the cut fruit cocktail which could be behind the bug.

‘The sheets had gotten very mucky and nobody was allowed in to clean so we had to do it ourselves.

‘Someone came to take them but the hotel said they didn’t have in-house laundry and would have to send our clothes elsewhere.’

Priyanka says the laundry service charged £3 to clean a single pair of socks and was shocked by the prices – instead requesting a bottle of washing detergent and hand-washing their clothes, leaving them around the room to dry.

While Parth’s condition improved the following day, Preet then came down with identical symptoms.

Priyanka said: ‘That’s when I started to panic because it meant it was definitely the food.

‘We all had to stop eating because I was breastfeeding too, and we couldn’t order takeaways and run the risk of getting worse.

‘My husband and I requested plain foods from the hotel a number of times but they couldn’t offer us alternatives, so we relied on fruit and yoghurt, and then purchased cereal from Amazon.

‘We worried about the fruit the hotel gave us because it came pre-sliced and was left outside our door, so we had no way of knowing how long ago it had been cut.

‘Luckily we have friends in London who brought us foods like boiled rice to keep us going.

‘The paramedic came to check on us and offered us a banana and croissant – she showed us more empathy than the hotel staff.’ 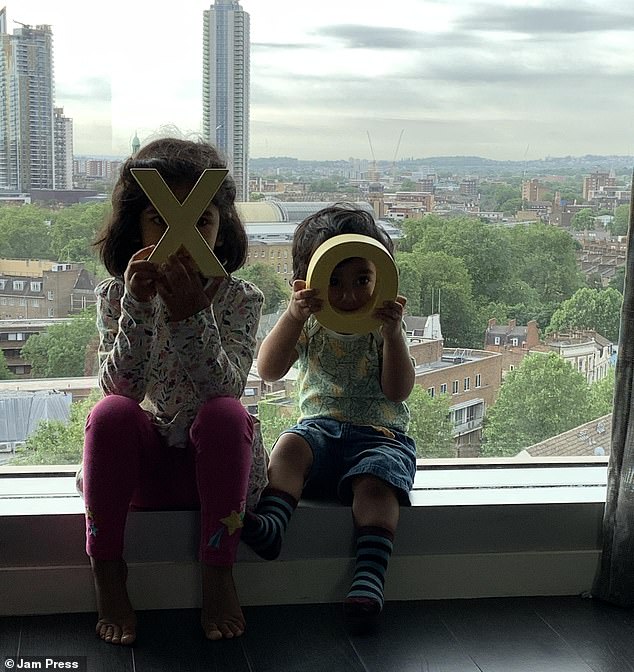 After five days, the children (above) had recovered from their stomach bug, but continued to find the quarantine distressing in the ‘claustrophobic’ room

After five days, the children had recovered but continued to find the quarantine distressing.

Priyanka said: ‘Our one-year-old felt upset most times – partly due to the sickness bug – as he has only just started walking and couldn’t understand why he was restricted in a room.

‘My husband and I were frustrated and felt helpless in the first two to three days, largely due to the children catching the bug, and also due to not being able to give them fresh air or enough physical exercise.

‘We had no other choice than to accept the circumstances and at times were withdrawn, but we tried to develop into a routine of sorts once the sickness bug left us.’ 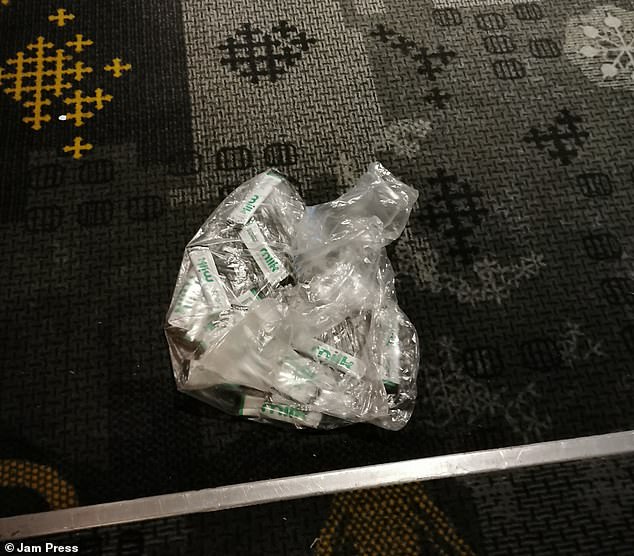 Pictured: Milk sachets were left outside the rooms of families who had babies with them

Another family, who wished to remain anonymous, reported security guards standing outside their rooms ‘constantly’.

They also claimed to have had several maintenance and service issues, including securing ‘proper food’ for their toddler with the meal on their first day arriving four hours after the child’s usual mealtime.

The second family paid £2,500 for their stay and confirmed they too were only given 15 minutes of exercise per day on the roof terrace.

Priyanka said: ‘We have gone through this awful stay and don’t want others to have to go through the same thing.

‘Everything about the quarantine was hard.

‘However much of an indoor or outdoor person you are, it is very claustrophobic when you don’t have any fresh air coming in.

‘The hotel didn’t have any empathy for our situation and weren’t helping us.

‘There needs to be more sympathy and empathy for people in quarantine – especially those travelling with kids.’ 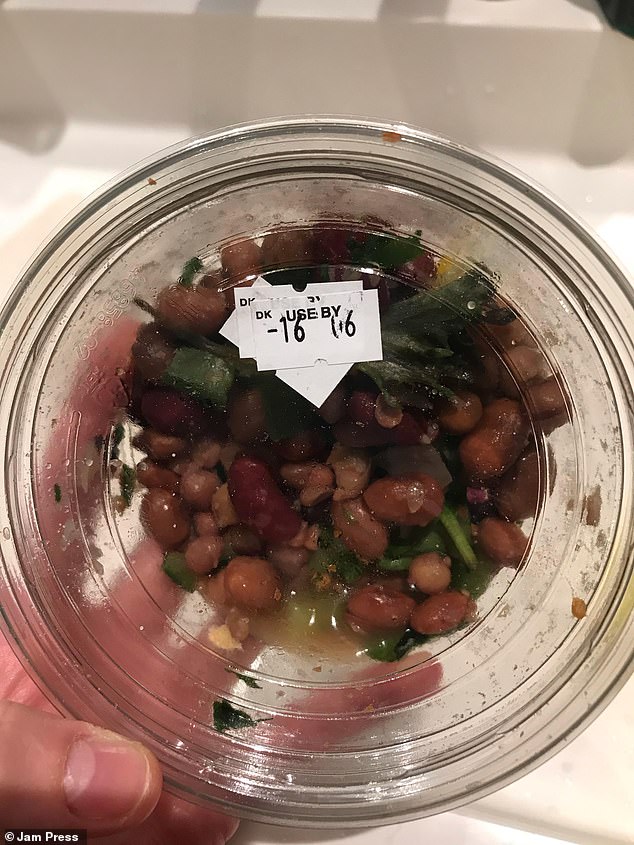 A Park Plaza spokesperson said: ‘We take our role in assisting the UK government with its hotel quarantine programme very seriously, to help provide a safe and comfortable experience for travellers.

‘We understand that the quarantine process may be difficult for travellers and we do our utmost to make our guests feel welcome throughout their stay.

‘We are working closely with the DHSC and the relevant authorities to ensure the service we provide meets the parameters set by the government.

‘Furthermore, we endeavour to provide service levels above and beyond what is expected of a government-approved quarantine hotel.

‘As part of the arrangement with DHSC, there is a medic on site for guests 24/7 and the hotel team hasn’t been informed by the medical support team of any guests suffering from stomach bugs related to food served.’