‘My boys have been robbed’: Family’s devastation after mother-of-two, 39, died from cardiac arrest on operating table after doctors said her half marathon broken leg was a pulled hamstring

A mother-of-two died from a cardiac arrest on the operating table after doctors misdiagnosed her broken leg as a pulled hamstring.

Sarah-Jayne Roche, 39, was 10km into the Cardiff half marathon when she fractured her femur and had to drop out of the race on October 7 last year.

Although she went to A&E three times as her leg continued to swell, doctors only gave her paracetamol and told her to use an ice pack as they believed it was a pulled hamstring.

On her fourth visit, doctors carried out an x-ray and spotted her injury, and booked her in for an hour-long operation – but she suffered a cardiac arrest and died, twelve days after her initial injury.

Now her family are paying tribute to Mrs Roche, who was head of learning support at Treorchy Comprehensive.

Sitting in Mrs Roche’s Pontypridd home, her mother Pat said: ‘She was vivacious, she was lovely, gorgeous. She kept us all in hand – if she had anything to say she would tell you, she wouldn’t beat around the bush. 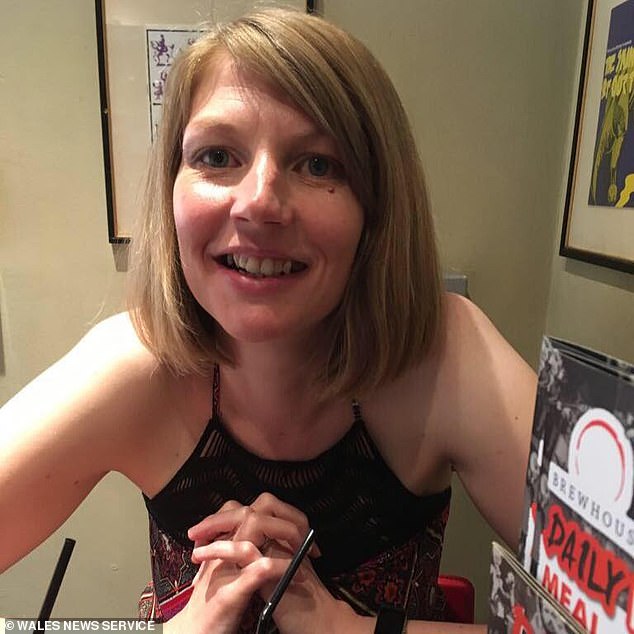 Sarah-Jayne Roche, 39, was 10km into the Cardiff half marathon when she fractured her femur and had to drop out of the race on October 7 last year 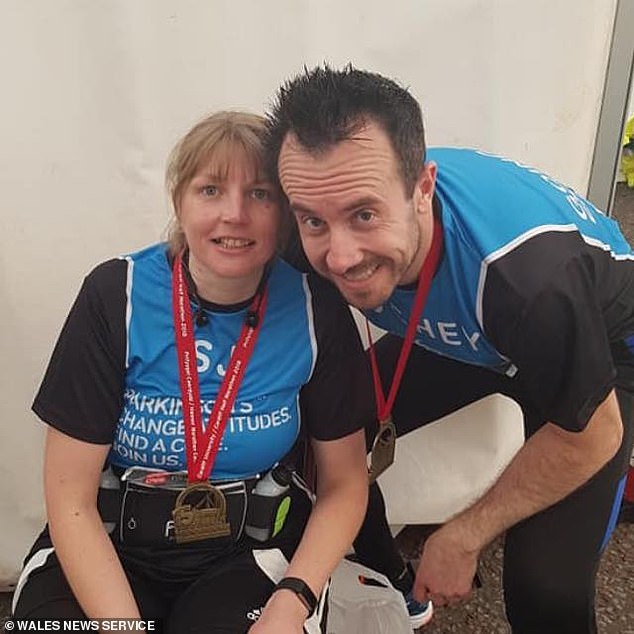 Although she went to A&E three times as her leg continued to swell, doctors only gave her paracetamol and told her to use an ice pack as they believed it was a pulled hamstring. Pictured: Mrs Roche on the day of the race

‘That was what was so nice about her. She would keep her older sister and brother in check, and was the only one that would work with her dad when he was decorating.’

‘She loved her job, really loved it. They respected her.’

The University of Glamorgan graduate met her future husband Steven in 2000, marrying him five years later.

Although little time has passed since her death, it’s important for Mr Roche that their sons, aged 12 and eight, are surrounded by memories of just how special a mother she was.

Mr Roche, 42, said: ‘As upset as I feel, I feel more aggrieved for our two boys. Robbed is probably the best word.

‘At least I had 18 years with her, whereas they are not going to have their good times, be that going through school, my first whatever – she’s not going to be there.

‘One of the first things I wanted was to just document everything. [The boys] are young and it would be nice in time for them to have something to look through and reflect on and hit home that even though she’s not here they know what type of mother she was.’

He added: ‘I was the best man at a wedding and that was the first time we met. I plucked up the courage then to go on a date with her about a week or so later and it went from there.

‘They say opposites attract and I’m a very laid-back sort of person so I guess it was fire and ice, you could say.

‘She would do anything for anyone and had this amazing, caring side to her.

‘But she also liked to laugh at other people’s misfortunes. So if example if I broke my toe going through the stair gate, she wouldn’t say “how are you doing” she would just laugh out loud.’

Mrs Roche had decided to run the half marathon to raise money for Parkinson’s UK, following her father’s diagnosis.

After the felt a shooting pain in her leg, Mrs Roche was taken to a medical tent to be examined.

Mr Roche said: ‘She was really determined – if she had her mind set on something she would do it – and she prepared diligently for the matter.

‘She had done everything asked of her and was ready for the event on the day. From July onwards we were training two, maybe three times a week. 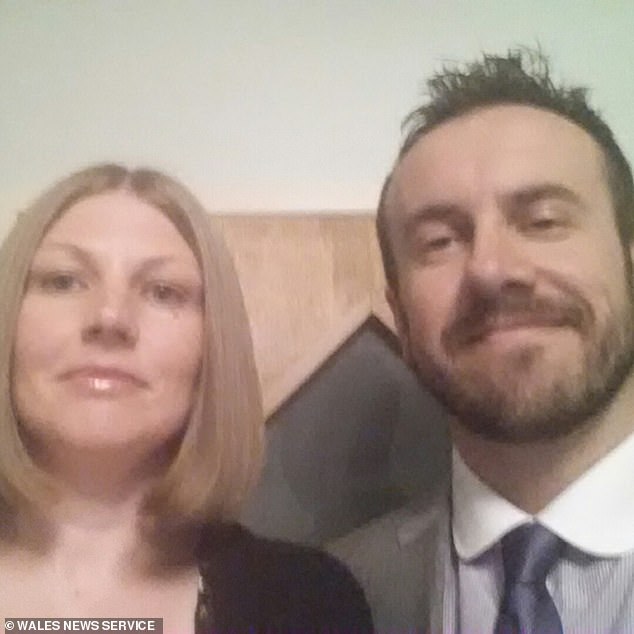 Her husband Steven, pictured together, is devastated at the loss. He said: ‘As upset as I feel, I feel more aggrieved for our two boys. Robbed is probably the best word’

‘When she pulled up I stopped alongside and asked her what it was. She said she couldn’t run anymore. She just felt a shooting pain.

‘I just thought at first she had a bit of cramp but then she said she couldn’t move that’s when we called for help.

‘They called for an ambulance and after maybe 20 or 30 minutes Sarah told me to go on and finish the race.’

At the medical tent at the event she was advised the pain was likely from a hamstring injury, and told to apply ice and take paracetemol.

But concerned by the pain she was in, her family decided to take her to A&E at the Royal Glamorgan hospital that afternoon.

Mr Roche said: ‘We eventually got seen by somebody in A&E. Based on what they had seen, even though she couldn’t weight bear, they said they suspected a hamstring tear of some sort and gave the same advice with paracetamol and to put some ice on it.

‘The following day the pain hadn’t alleviated and Sarah was complaining one leg was colder than the other, the affected leg.

‘Later that afternoon we went to the Royal Glam and after several hours eventually got seen by a consultant. They didn’t feel any other investigation was needed.

‘She even struggled to use crutches the pain was that much. She was literally on her hands and knees to shuffle herself up the stairs.

‘She just acted on the advice the hospital gave her. You just assume this is what happens but after three four days the pain wasn’t getting better.’

From there Mrs Roche and her family were told to wait until an appointment that had been booked with a soft tissue specialist the following Friday after the race.

At the appointment, despite the swelling, her family claim she was given stronger painkillers and told no immediate action was needed that day.

But on October 16 her mother and father found themselves with no choice but to take their daughter back to the hospital for a fourth time as the pain intensified – where it was found she had fractured the bottom of her femur.

Mr Roche said: ‘Sarah was down her mum and dad’s and it got to the point where she literally couldn’t get out her chair she was in so much agony.

‘They took her to A&E and after a few hours then, having seen her leg which was twice the size, they then decided to x-ray and it was then they found the fracture.

‘On October 17 they did a small operation to straighten out her leg as much as possible and booked her for the operation on the Friday afternoon.’

On the afternoon after the procedure to correct her leg, they were called into the Royal Glamorgan hospital and told the active, healthy mother had suffered from a cardiac arrest during the operation, and that resuscitation had been unsuccessful.

Mr Roche said: ‘They were going to put a nail in her leg so my understanding was that it was only a straightforward procedure that would only taken between an hour, and hour and a half.

‘She was the only one going into theatre that afternoon so I went there about 3pm. Time does tick on but you think perhaps they are busy or perhaps they didn’t start straight away.

‘It was after 4pm [when] they suddenly came in and sat down with me and said problems had arisen and that she had gone into cardiac arrest. Things went downhill from there.

‘They tried as best they could to resuscitate her back. The family arrived and we were there and that was that.

‘It was difficult because no sooner had it happened, you’re seeing it there in front of your eyes, then 20, 30 minutes after you have to come home and tell your children mummy is not going to be back.

‘Our understanding was after this operation she would be out for the best part of four to six months so we were just assuming we would get ready for that. Never in a million years did we think this was ever going to happen.’

By speaking publicly about their loss, Mrs Roche’s family want to make sure she is remembered in the best way possible – as a much-loved daughter, sister, aunt and mother who would never fail to bring a room to life.

For her brother Simon, his sister’s death also raises wider questions over the growing number of people entering marathons and half marathons, open to anyone regardless of their experience and preparation ahead of the event. 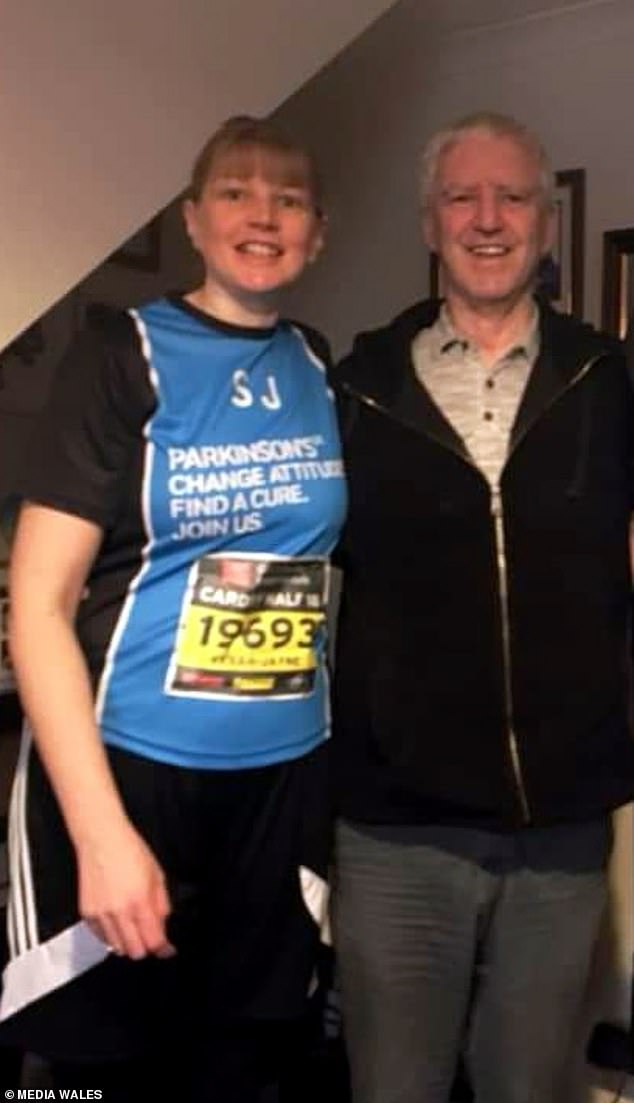 The mother-of-two had decided to run the race to raise money for Parkinson’s UK after her father Alan Newman, pictured together, was diagnosed with the illness

But her family have a long journey for answers ahead, after facing delays to a final inquest date caused, in part, by a series of missed deadlines for the health board to submit relevant statement.

Speaking in a pre-inquest review held on Friday, coroner Graeme Hughes criticised the delays as ‘unacceptable’.

Addressing NHS Wales legal representative Gavin Knox, he said: ‘This is a family who have gone through a traumatic and unexpected death of a mother, a wife, a sister, among others.

‘It is not acceptable that matters relating to this in question have been exacerbated by significant procedural delays.

‘Not only does that accentuate the grief that the family have, and understandably so, which is the most important consequence of the delay, but as far as the administration of justice is concerned, it means…I have to stop what I am doing and put aside other matters that may be urgent as well.’

For Mrs Roche’s family, it means they will have to wait nearly a year before they can begin their own grieving process.

Mr Roche said: ‘The hardest part overall we are nearly waiting a whole year and until we get that verdict that’s when we as a family can’t start grieving it. We are just in a daze, trying to deal with it one day at a time.’

According to Sarah-Jayne’s sister, the worst part has been what she describes as a ‘lack of empathy’ for the family.

Her sister Sally said: ‘It’s that total lack of empathy and understanding for what the family is going through, and that’s what is hard to understand.

‘[Sarah-Jayne’s death] is constantly being brought up for us. It wouldn’t matter if it was happy memories but it’s those memories we are constantly have to face week after week.

‘She was an amazing auntie to my boys. You don’t realise until someone is gone just how much of an impact someone has on your life without even trying.’

A spokeswoman for Cwm Taf Morgannwg University Health Board said: ‘While we cannot comment on the circumstances of individual cases, we were deeply saddened by the passing of Mrs Roche and our thoughts remain with her family at this difficult time.’