Nigel Farage will unveil the Brexit Party’s election campaign today amid calls for him to rein in his ambitions or risk splitting the Leave vote at the ballot box.

Top Tories are refusing to heed a suggestion of an electoral pact between the hardline eurosceptic and Boris Johnson’s party by US president Donald Trump.

Even Conservative grassroots favour a non-aggression pact after an audit by the Daily Mail found Mr Johnson could miss out in almost 90 battleground constituencies if they run against each other.

If the Brexit Party choose not to stand and 70 per cent of their backers switch to the Tories (while 30 per cent go to Labour), then the Conservatives could take 38 target seats off Jeremy Corbyn’s party.

Reports suggest that the Leave-backing party could axe the number of seats it contests to less than 100 when the campaign is unveiled this morning.

However, the party is also said to be considering running hundreds of candidates amid fears they could lose publicity given to larger parties if they cut back too far, the Times reported.

Mr Farage told LBC this morning: ‘Some newspapers are suggesting that we will fight vast numbers of seats, others think we will fight as few as 20 seats.

‘I run a very tight ship, we don’t leak. I will reveal all later on today.

‘But, I can assure you that most of what I say will be about Boris’s deal and the need, in my view, for some kind of Brexit alliance.’

But this morning, Communities Secretary Robert Jenrick told BBC Radio 4’s Today programme: ‘We are not interested in doing any pacts with the Brexit Party, or, indeed with anybody else. 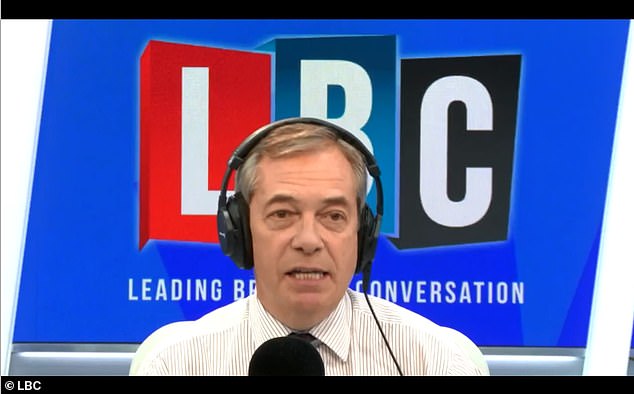 Nigel Farage will unveil the Brexit Party’s election campaign today, including which seat he plans to run in 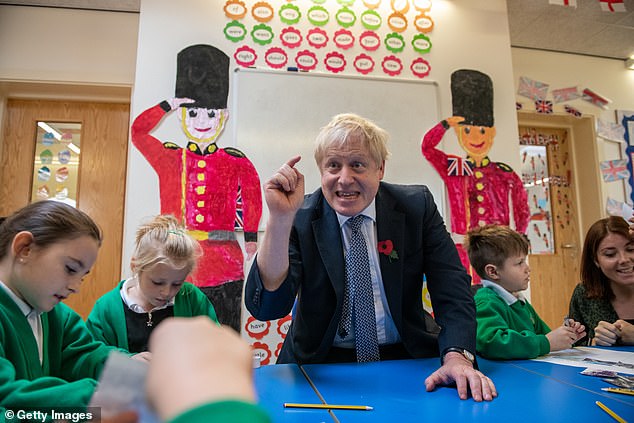 A poll by the Conservative Home website found that more than half back an agreement.

This morning’s event is expected to see Mr Farage’s party reveal how many candidates it will field and where they will stand. 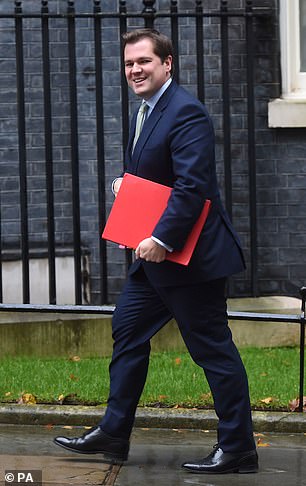 This morning, Communities Secretary Robert Jenrick told the BBC : ‘We are not interested in doing any pacts with the Brexit Party, or, indeed with anybody else’

And he and the party’s chairman Richard Tice are also likely to announce which constituencies they will run in. It will be Mr Farage’s eighth attempt at becoming an MP.

The party is understood to be engulfed in a behind-the-scenes row over how many seats to contest, with some MEPs threatening to quit if they create difficulties for the Tories and others saying they will go if they withdraw candidates in hundreds of constituencies.

Mr Farage had originally said that the party would field 600 to fight nearly every seat in the UK, except for Northern Ireland.

But yesterday he refused to rule out the prospect of the Brexit Party withdrawing hundreds of candidates in order to target a small number of Labour-held seats.

Mr Trump last night lavished praise on Boris Johnson and urged him to strike an election pact with Nigel Farage as the US President launched a stinging attack on Jeremy Corbyn.

Mr Trump said if Mr Johnson and Mr Farage ‘get together’ and form an alliance before December 12 they would be ‘unstoppable’.

He then warned voters against backing Mr Corbyn at the ballot box as he said the Labour leader would be ‘so bad’ for the UK.

The key quotes from Donald Trump’s interview with Nigel Farage

On Mr Farage: ‘You’re like a great tea leaf reader.’

On a Tory/Brexit Party pact: ‘I wish you two guys could get together I think it would be a great thing… if you and he get together as, you know, unstoppable force.’

On meeting the Queen: ‘A great, great woman, and I think we hit it off really well.’

On Theresa May: ‘I told her exactly how to make a deal but she didn’t listen to me and that’s okay, not everybody listens to me, some people do.’

He also rubbished Mr Corbyn’s claims that the NHS would be on the table during post-Brexit trade talks between the UK and US.

The US President made the bombshell intervention during an unexpected interview with Mr Farage on LBC this evening on the day the general election campaign began in earnest.

Mr Farage has repeatedly offered Mr Johnson an electoral pact to avoid splitting the Leave vote – but only if the PM agreed to ditch his deal with Brussels and campaign for a ‘clean break’ from the EU.

Mr Johnson has so far rejected the offer and has insisted he will campaign on a pledge to deliver his Brexit deal.

However, Mr Trump piled the pressure on the PM to change his mind tonight as he backed Mr Farage, his political ally, and suggested together the Tories and Brexit Party could do something ‘terrific’.

He also delivered an unprompted assault on Mr Corbyn who he said would take Britain to ‘such bad places’ if he became PM.

He said: ‘I have great relationships with many of the leaders, including Boris. He is a fantastic man and I think he is the exact right guy for the times and I know that you and him will end up doing something that could be terrific.

‘If you and he get together, you know, unstoppable force and Corbyn would be so bad for your country.

He added on the possibility of a pact with Mr Johnson: ‘I wish you two guys could get together I think it would be a great thing.’