Farmer, 72, is left with giant triple hernia on his stomach

Farmer, 72, is left with giant triple hernia on his stomach after NHS operation was cancelled due to Covid pandemic and he is still waiting 15 months later

NHS bosses have apologised to a 72-year-old patient left with a giant triple hernia on his stomach – after his operation was delayed by the coronavirus pandemic.

Farmer Winston Baldwin is now struggling to even walk or go to the toilet after falling victim to the NHS delays.

He developed the hernia following a bowel operation in 2019 and was due to go under the knife at Crewe’s Leighton Hospital in February, 2020.

The procedure was delayed and then coronavirus pandemic and subsequent lockdowns struck meaning the operation was continually pushed back.

Instead Winston, who lives in Oakhanger, near Alsager, was given a corset to support his back. 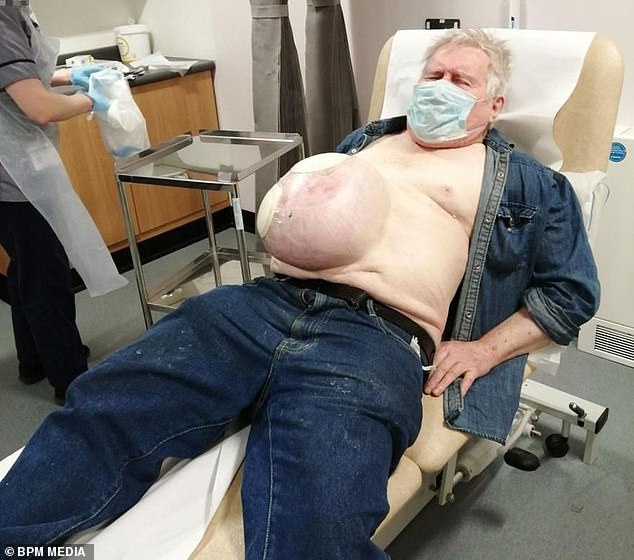 He said: ‘When I walk a yard from the phone to the table I’m out of breath – it’s just been getting worse.

‘I developed a small hernia in 2019 but had to wait six months for treatment because I’d just had an operation. I was then sent to Northwich and back to Leighton in 2020. And then lockdown hit.

What is a hernia?

A hernia happens when an internal part of the body pushes through a weakness in the muscle and is most common on people’s chests, hips and stomachs.

The lump can often be pushed back in or disappears when you lie down.

In some cases the risks of surgery outweigh the benefits of having the hernia removed.

If a doctor does decide to go ahead with surgery they will either do open surgery – where a cut is made to allow the surgeon to push the lump back into the stomach – or keyhole surgery -where several smaller cuts are made, allowing the surgeon to use various special instruments to repair the hernia.

‘The hernia has continued to grow and grow. They’ve given me a corset and I have constant back pain.

‘I’m just surviving now and it’s not good at all. I want to work on my farm, I just want my life back. I’d go anywhere for treatment from Madrid to Lagos.

A spokesman said: ‘We are unable to comment in detail about individual patients due to confidentiality reasons but would like to emphasise that we take any issues raised regarding a patient’s care very seriously.

‘We are currently looking into this matter and will continue to liaise with Mr Baldwin directly about his ongoing care and treatment.

‘In the meantime, we would like to apologise for the delays experienced during what we appreciate has been a worrying time.’

The spokesman added: ‘Throughout the pandemic we have continued to provide urgent and cancer treatment, but high levels of Covid-19 activity unfortunately resulted in delays for routine planned care, which we apologise for.

‘Now that the number of coronavirus cases has reduced, our staff are working hard to restore services and safely treat patients as quickly as possible according to clinical need.’