Titanic survivors, Prince Philip’s sisters and King George V with his wife are shown in fascinating portraits captured by one of America’s earliest news picture agencies

Incredible photographs taken by one of America’s earliest news picture agencies have emerged, with Titanic survivors, teenage suffragettes and even royalty among the images.

The pictures were produced and gathered for worldwide distribution by George Grantham Bain through his Bain News Service.

The service was established in 1898 by Bain, who was known as the ‘father of photographic news’, in New York City and worked to accumulate photographs of newsworthy events which could then be distributed to newspapers around the world.

Among the images is a photograph of 13-year-old suffragette Fay Hubbard proudly showing a young boy propaganda whilst wearing a bag labelled ‘American Suffragette.’

Another picture shows two Titanic orphans – Michel, four, and Edmond Navratil, two. Their father assumed the name Louis Hoffman to board the ship and died when RMS Titanic sunk in April 1912.

Notable politicians from the time were also captured in the photographs, with one image showing soldiers loading a flag-draped casket of former New York City mayor John Purroy Mitchel onto a wagon, with Theodore Roosevelt and other officials holding their hats in respect in 1918.

Royalty also graced the pictures, with one portrait from 1900 showing King George V standing next to his wife Mary of Teck. Prince Philip’s sisters Princess Margarita and Theodora of Greece, seated together in chair as children, also feature among the collection. 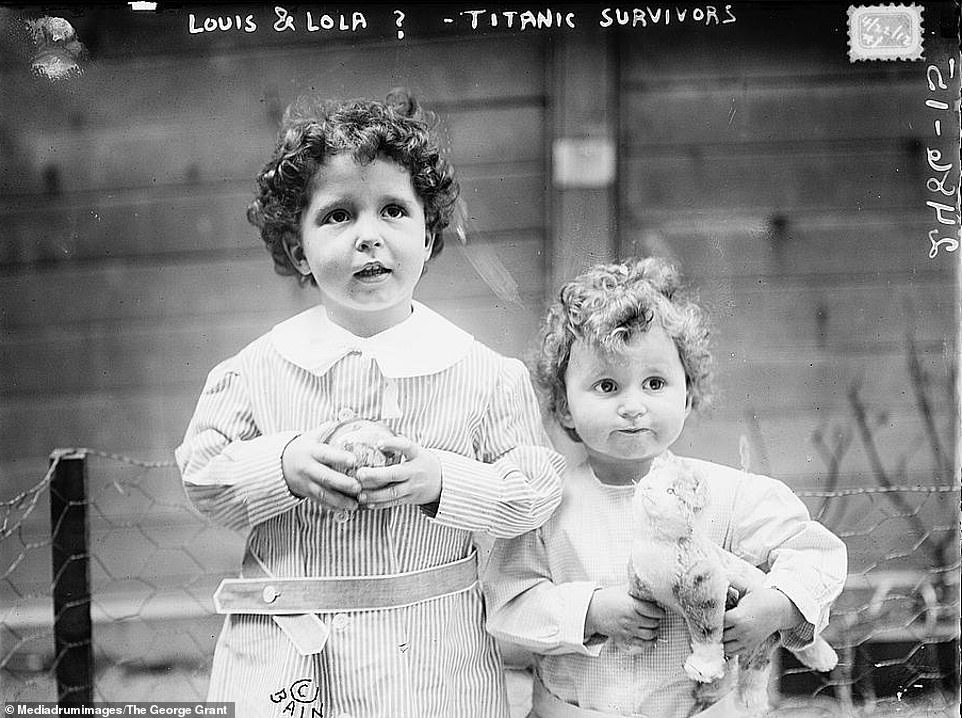 This picture shows two French boys – Michel, four, and Edmond Navratil, two – after they had survived the Titanic sinking in 1912. They became known as the ‘Titanic Orphans’ after it emerged that their father was on board and had died in the disaster. This image was captured before their true identities had been determined and before their father had been identified. It later emerged that he had fled with the boys having lost custody of them to his wife and had decided to emigrate to the US.  He used the false name Louis Hoffman to board the Titanic in Southampton and gave his boys the nicknames Lolo and Mamon 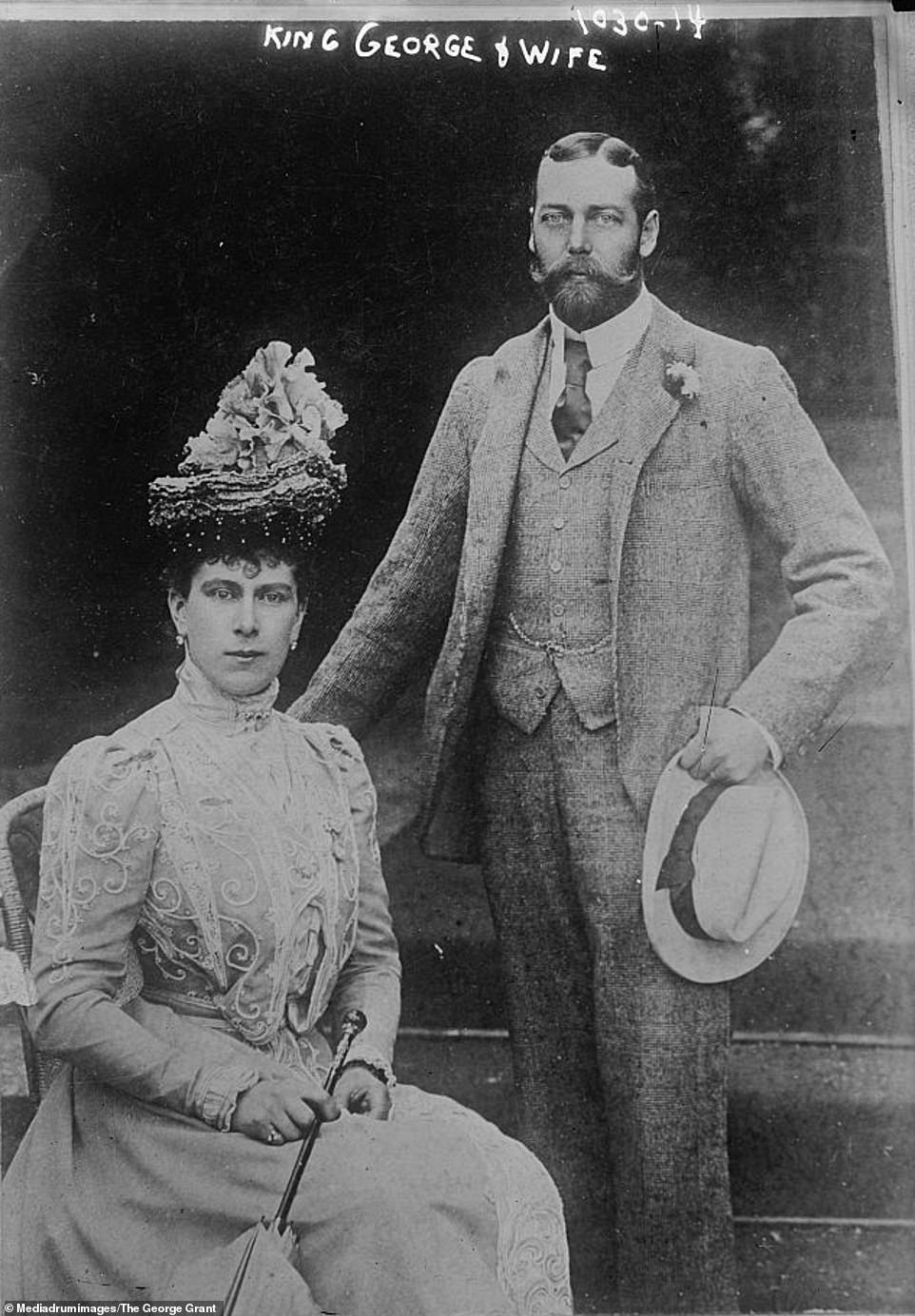 King George V, who reigned from 1910 until his death in 1936, is seen pictured with his wife Mary of Teck in this photograph from the collection of pictures from the Bain News Service – one of America’s earliest news picture agencies. King George married Mary of Teck in London on July 6, 1893 at the Chapel Royal, St James’s Palace after King George proposed to her that year. On the day of the wedding, George accidentally spotted Mary in her wedding dress down a long corridor in Buckingham Palace and, in an attempt to forget about the bad luck, made a ‘low and courtly bow’ – a gesture Mary never forgot 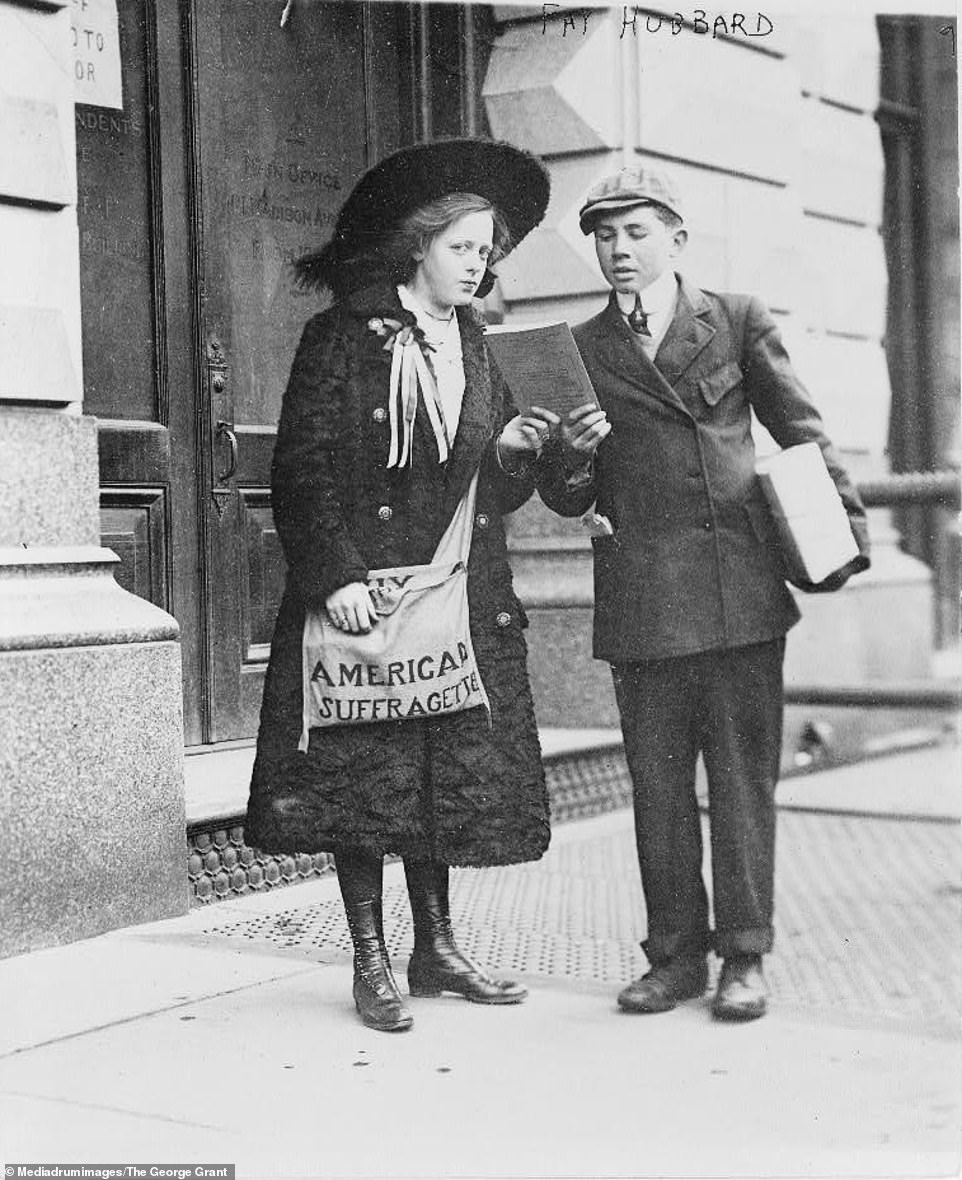 13-year-old suffragette Fay Hubbard (left) is seen in this picture showing a propaganda leaflet to a young boy on February 9, 1910 in new York City. The caption on her bag reads ‘American Suffragette’. At the time the picture was taken, Fay would often be seen walking through crowds trying to sell suffragette leaflets. She was the niece of the suffragette’s secretary Mrs E. Ida Williams. The suffragette movement in America was a decades-long struggle for women to be given the right to vote in elections. The fight for the right to vote took nearly 100 years 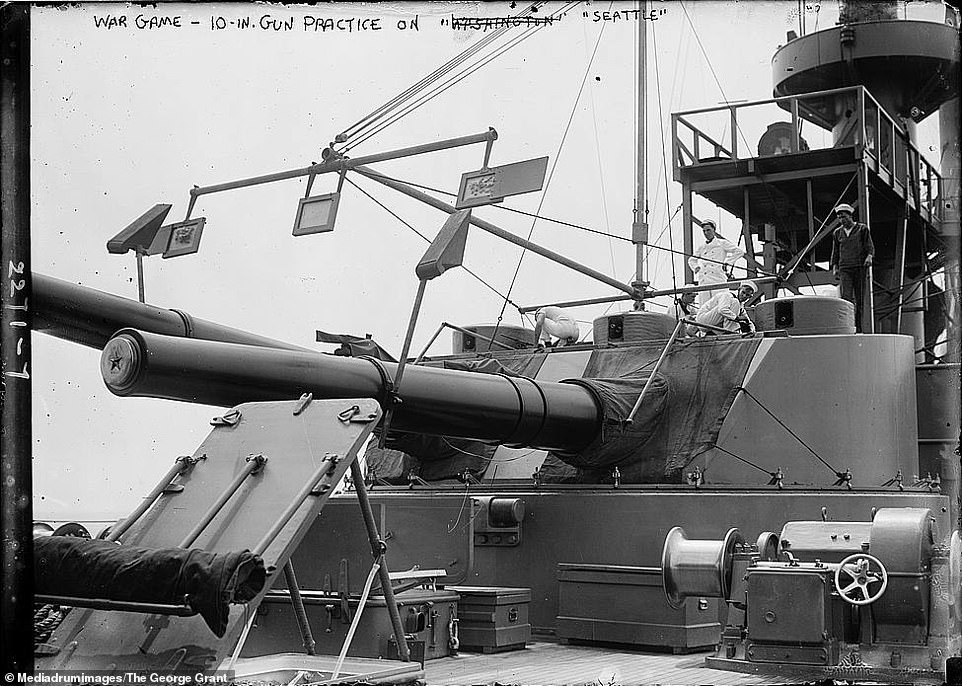 The USS Washington, which was renamed the Seattle, is pictured in November 1916 taking part in firing drills. A number of US navy sailors are seen standing on the deck behind the large naval gun. The warship’s name was changed in 1916 so that the new Colorado-class battleship could be given the name instead. At the same time that the ship had its name changed, it was taken out of reserve and recommissioned as the flagship for the Destroyer Force 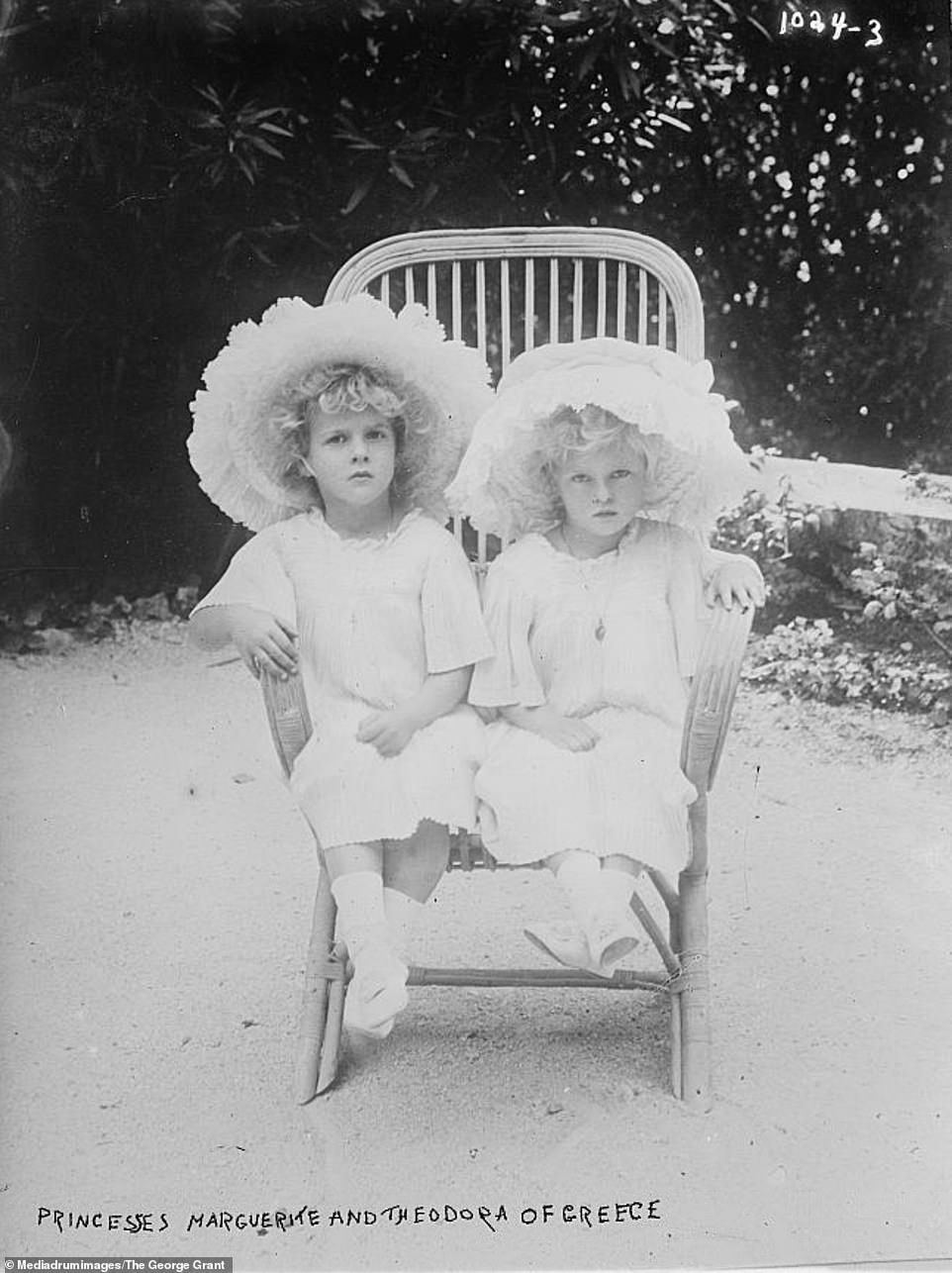 Princess Margarita and Princess Theodora of Greece, two of Prince Philip’s older sisters, are seen in this photograph sitting together on a wooden chair in 1910. Prince Philip had a close relationship with his sisters and even named Margarita as a godparent to Princess Anne. Margarita died in 1981 and Theodora, who Philip briefly lived with at one stage in his life after his mother was committed to an asylum and their father moved to Monaco, died in 1969 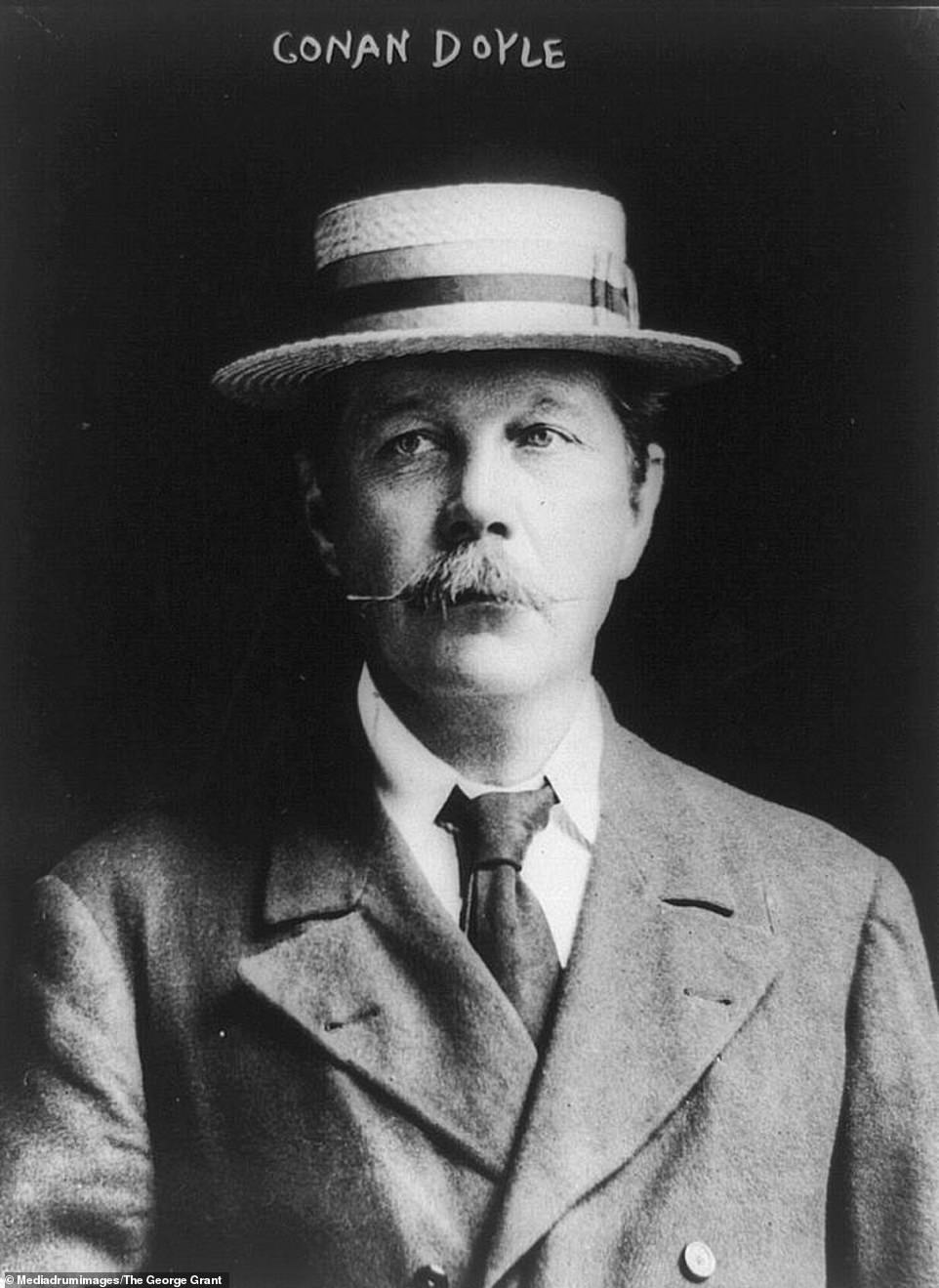 Among the collection of photographs is this portrait of author Sir Arthur Conan Doyle in 1913. The Sherlock Holmes creator was born on May 22, 1859, in Edinburgh, Scotland, and went on to define the crime fiction genre of novels during his career 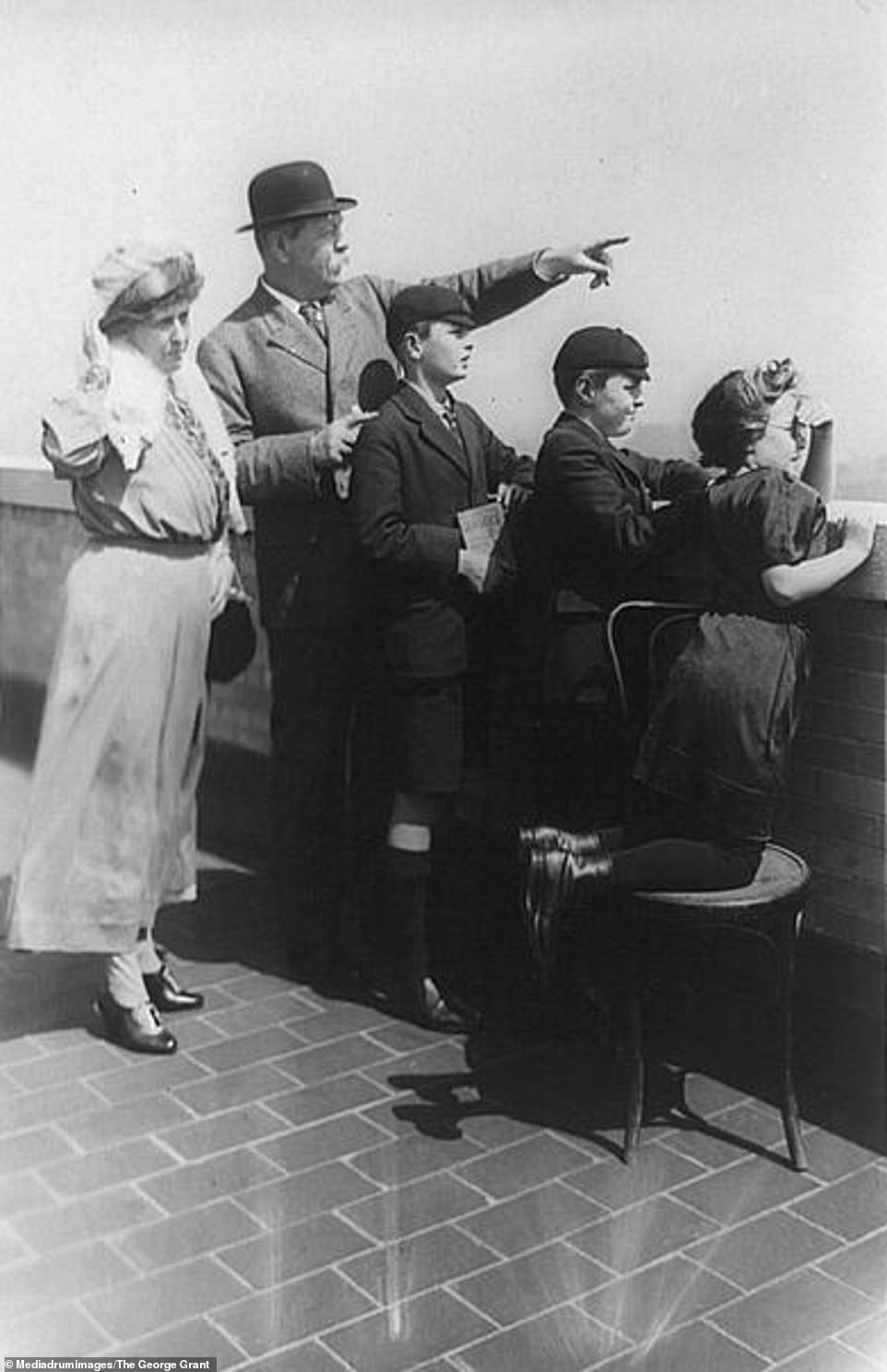 Another image of Sir Arthur Conan Doyle in the collection sees him in New York City with his family in 1922. He is seen pointing forwards as his family stare out into the distance over a brick wall. Throughout his life, Conan Doyle was married twice and fathered five children across the two marriages 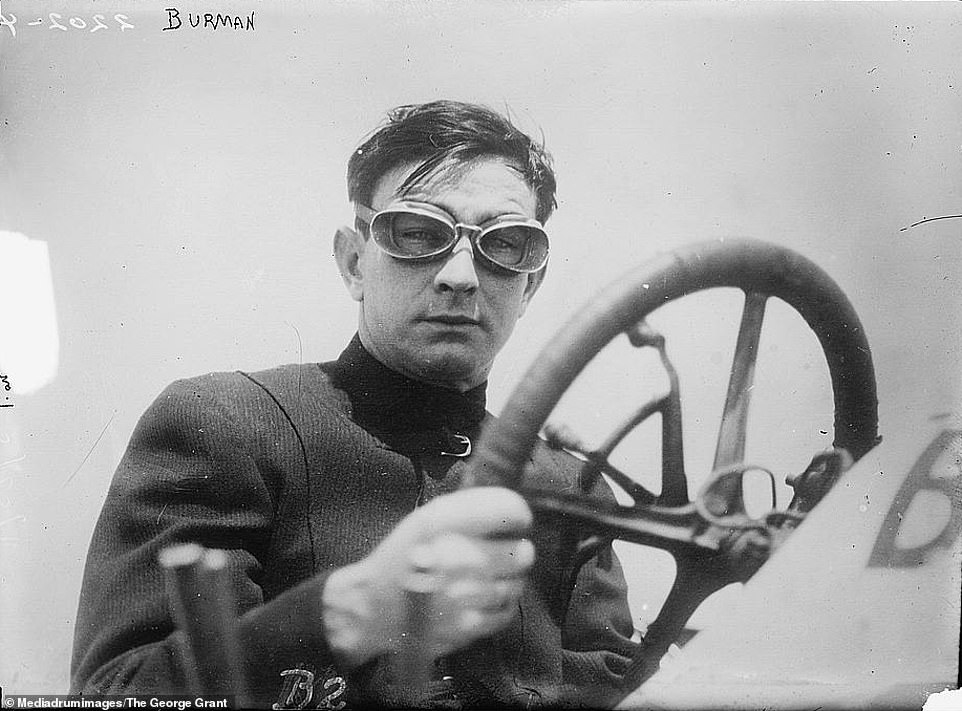 Race car driver and world-record holder Bob Burman is pictured behind the wheel on May 25, 1911. He participated in the 1911 Indianapolis 500 and was known for having set world-records in his 200-horsepower Blitzen Benz on Daytona Beach, reaching a speed of 228.1 km/h over a mile with a flying start. Tragically, Burman was killed in a road race accident in Corona, California on April 8, 1916, after he rolled his car 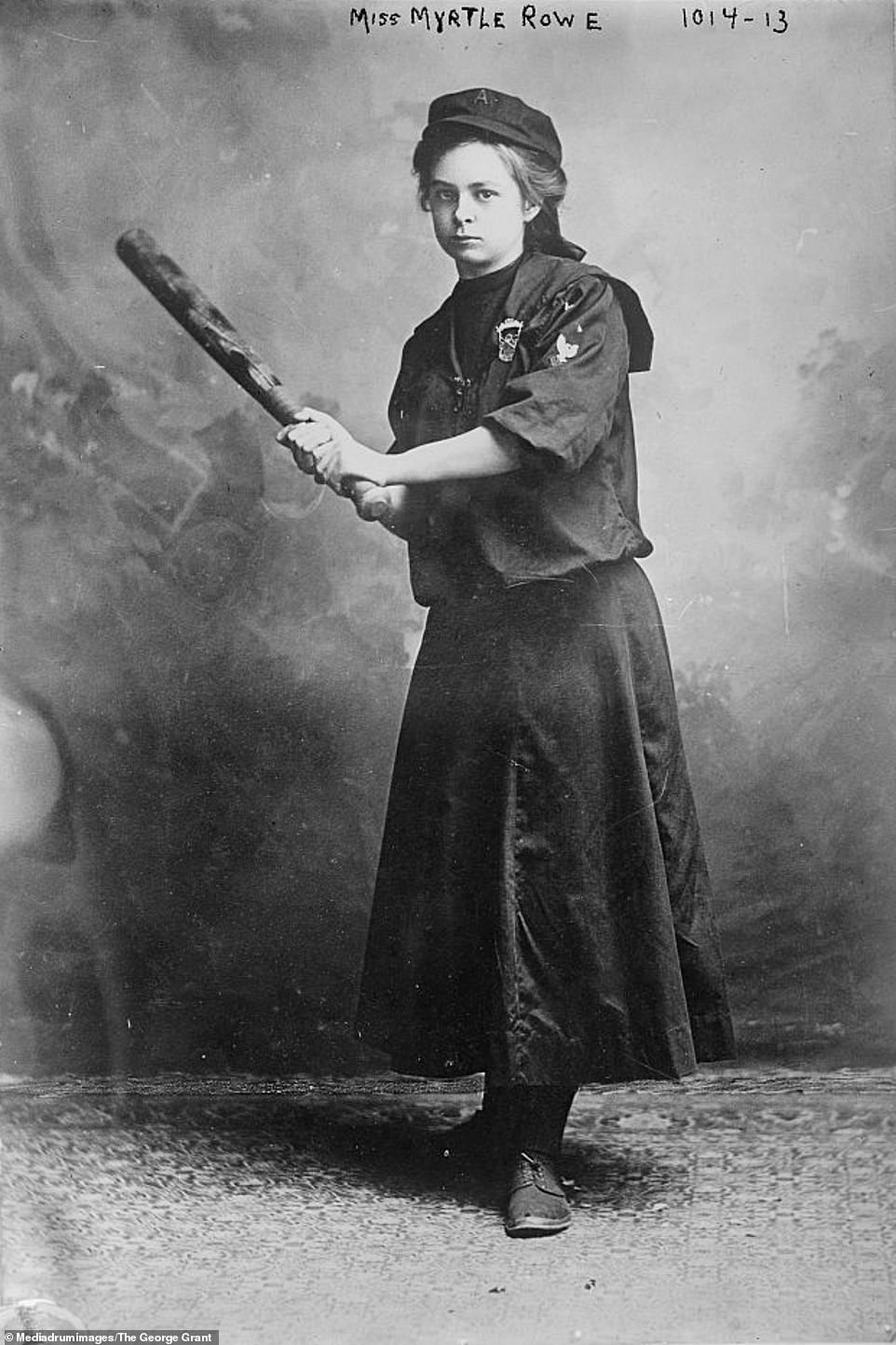 Female baseball player Myrtle Rowe is seen posing with her bat in this portrait from March 14, 1910. Rowe originally signed to play first base for the semi-professional Antler Athletic Club in New Kensington at the age of 18. Unlike the men on her team, Rowe’s playing uniform consisted of a blouse and a skirt down to her ankles 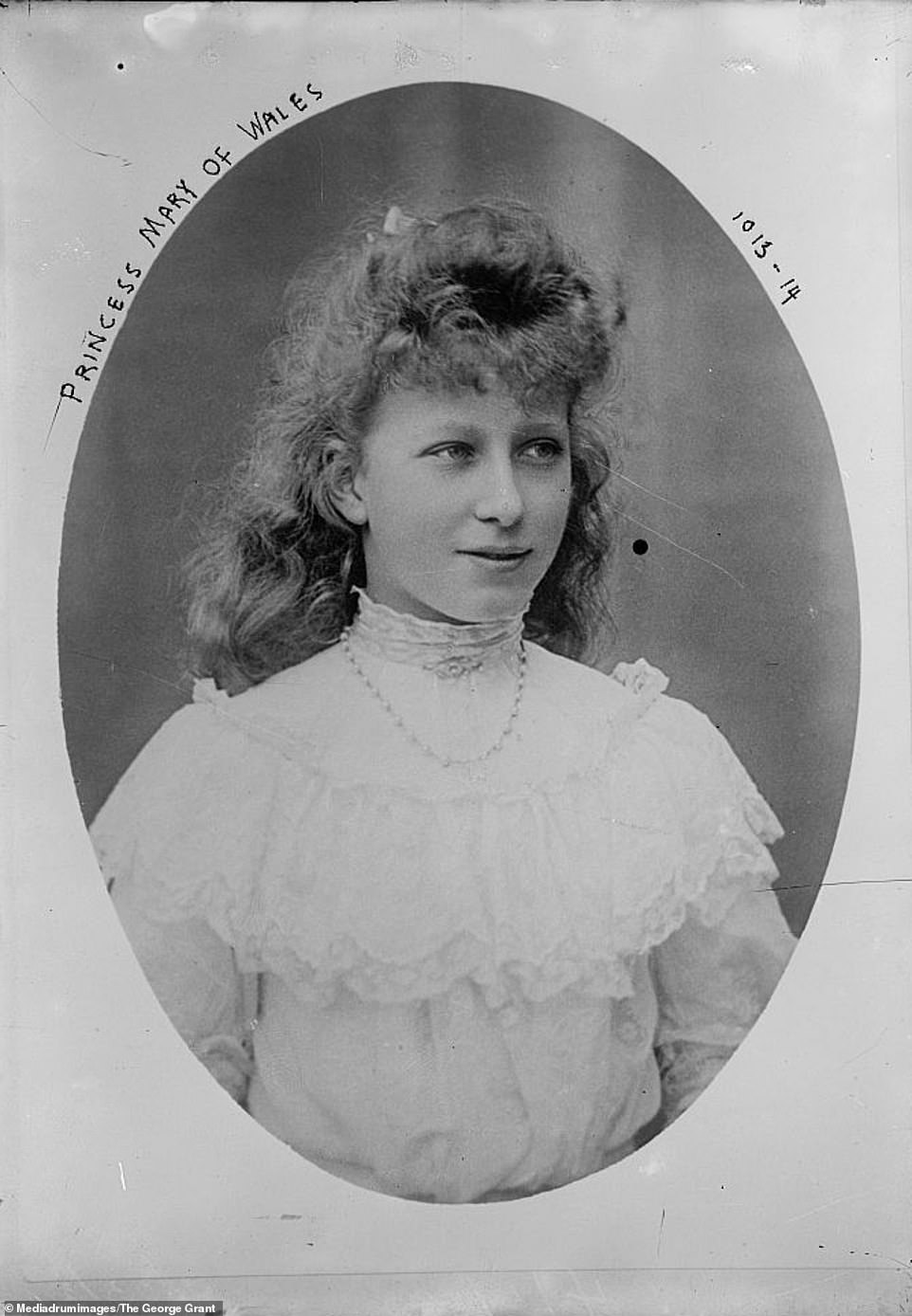 Another member of the royalty to feature among the Bain News Service treasure trove of pictures is this portrait of Mary, Princess Royal and Countess of Harewood. She was the only daughter of King George V and Queen Mary, and was also the aunt of the current British monarch, Queen Elizabeth II. During the Second World War she was known to carry out charity work in support of servicemen and their families 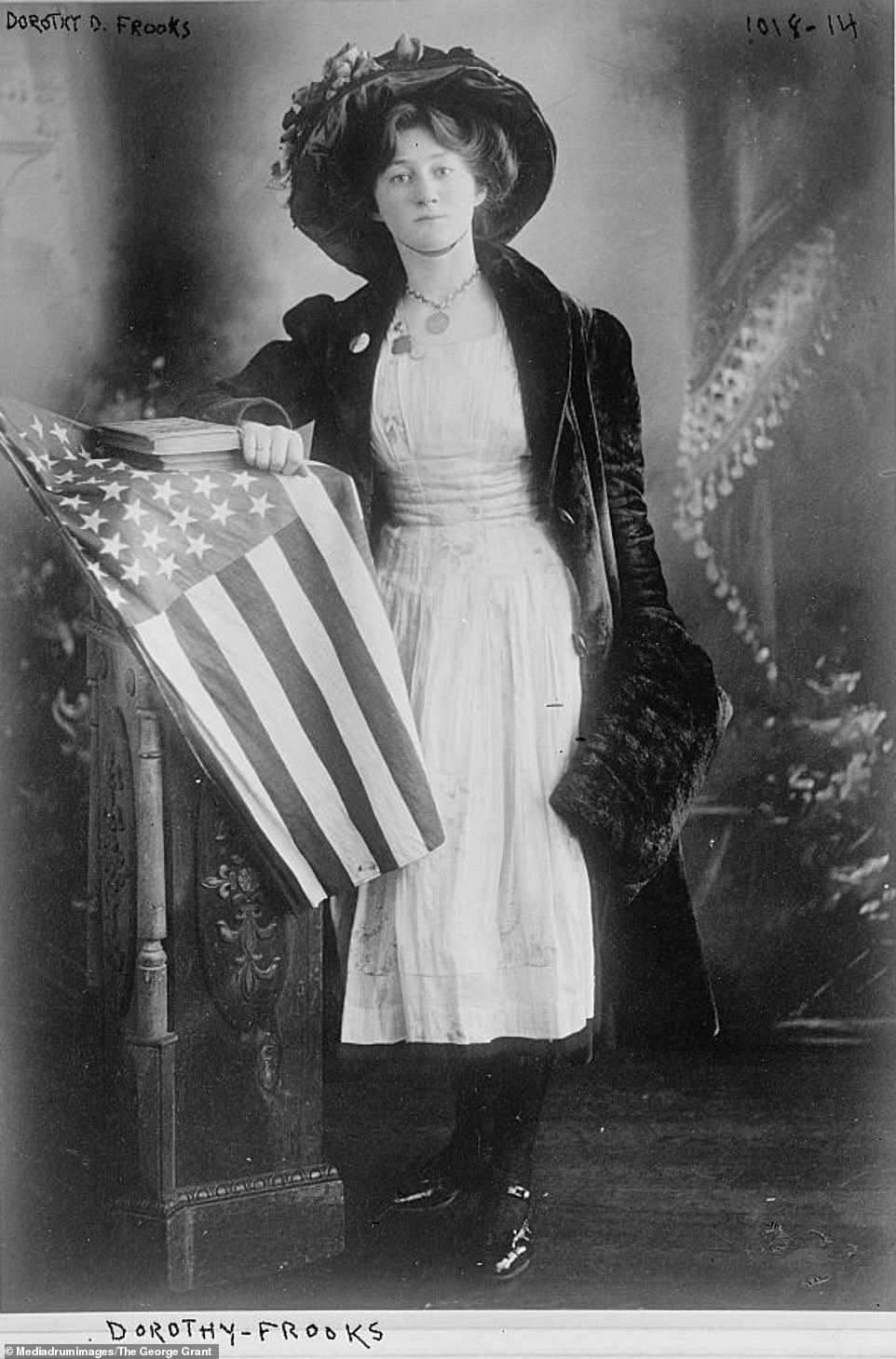 Dorothy D Frooks, pictured, was an author, publisher, military officer, lawyer, and suffragette. She found her voice at an early age after being employed by her mother’s London society friends to give street-corner speeches. In this picture, Frooks is seen leaning on a wooden pillar, upon which an American flag is draped. During the First World War, Frooks served as chief yeoman in the United States Navy 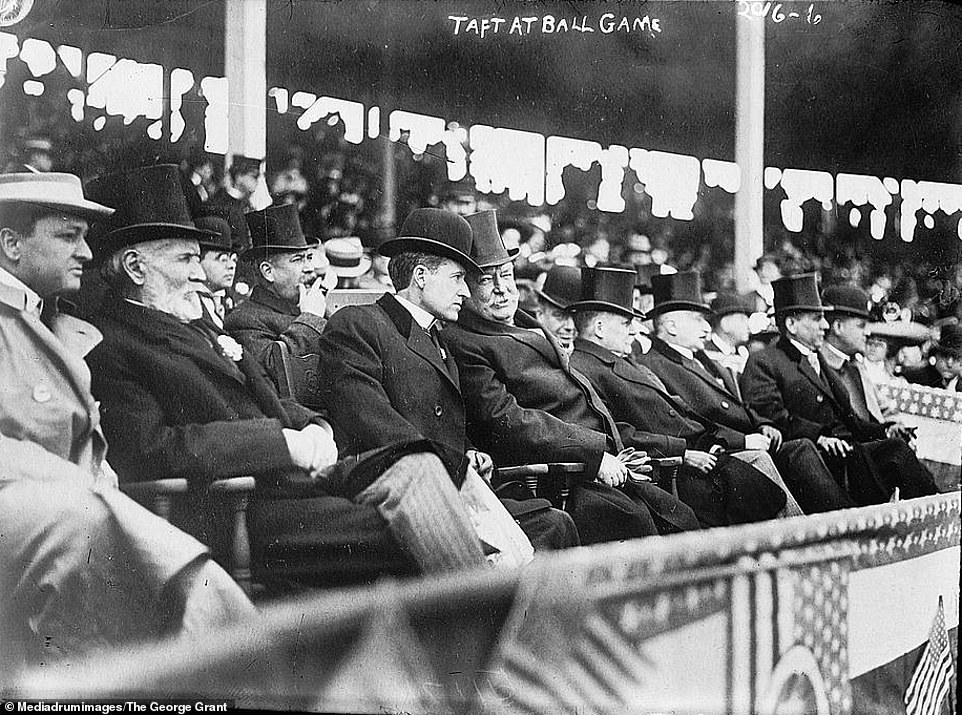 President William H Taft (pictured middle) is seen in Washington in 1910 attending a baseball game. Taft was the first president to throw out the first ball at a Major League Baseball season opener. Taft is the only man to serve as both president of the United States and Chief Justice of the Supreme Court and is also one of two Presidents to be buried in Arlington National Cemetery. He is also well known as the heaviest President, weighing in at over 300 pounds. He served as President between March 4, 1909 and March 4, 1913 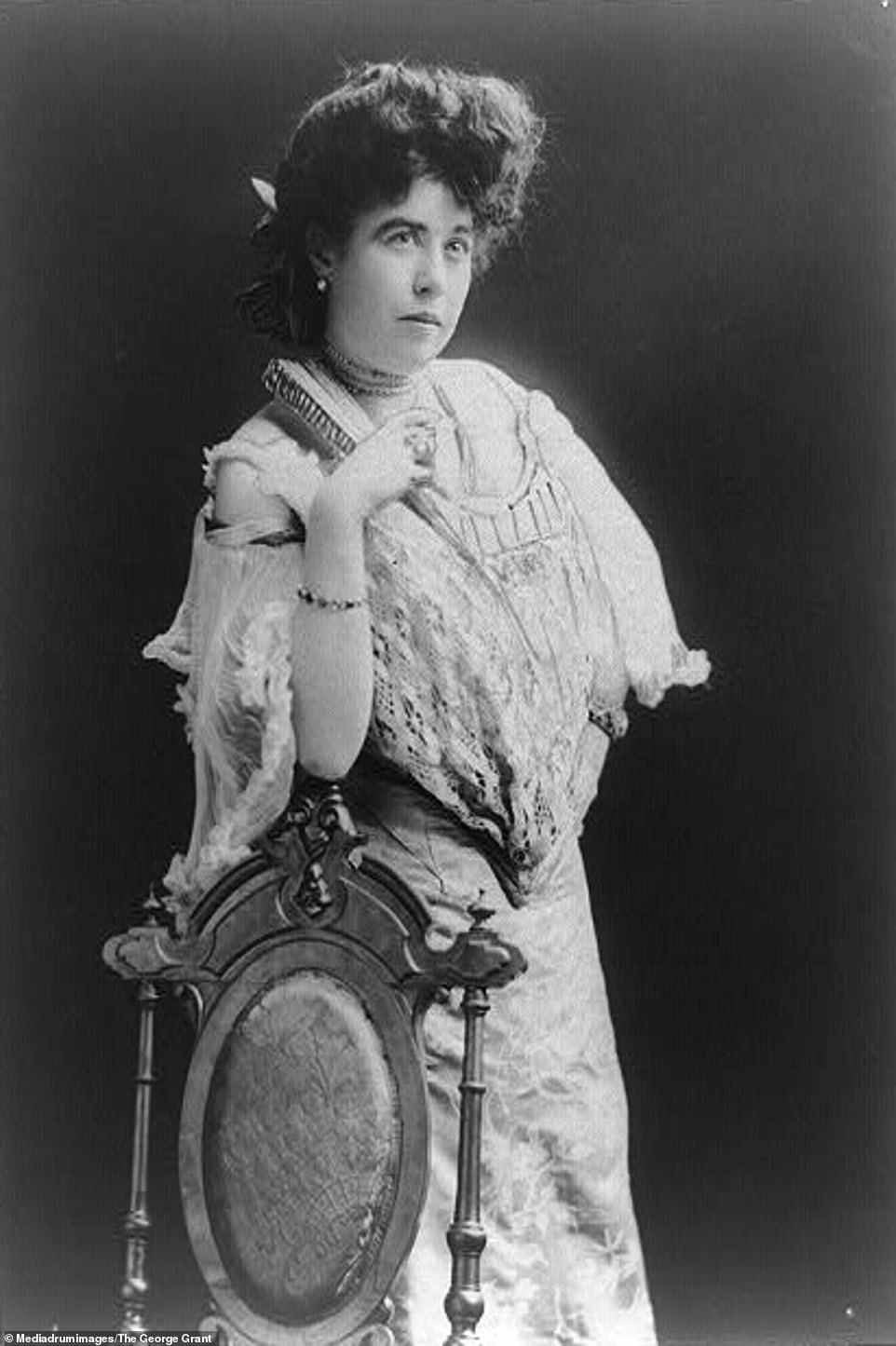 Mrs James J Molly brown, pictured here leaning against a wooden dining chair, was one of the survivors of the Titanic disaster of 1912. She was famous for having tried unsuccessfully to make Lifeboat No. 6 turn back around to help other passengers stuck in the freezing waters. Throughout her life, her friends nicknamed her ‘Unsinkable Molly Brown’ 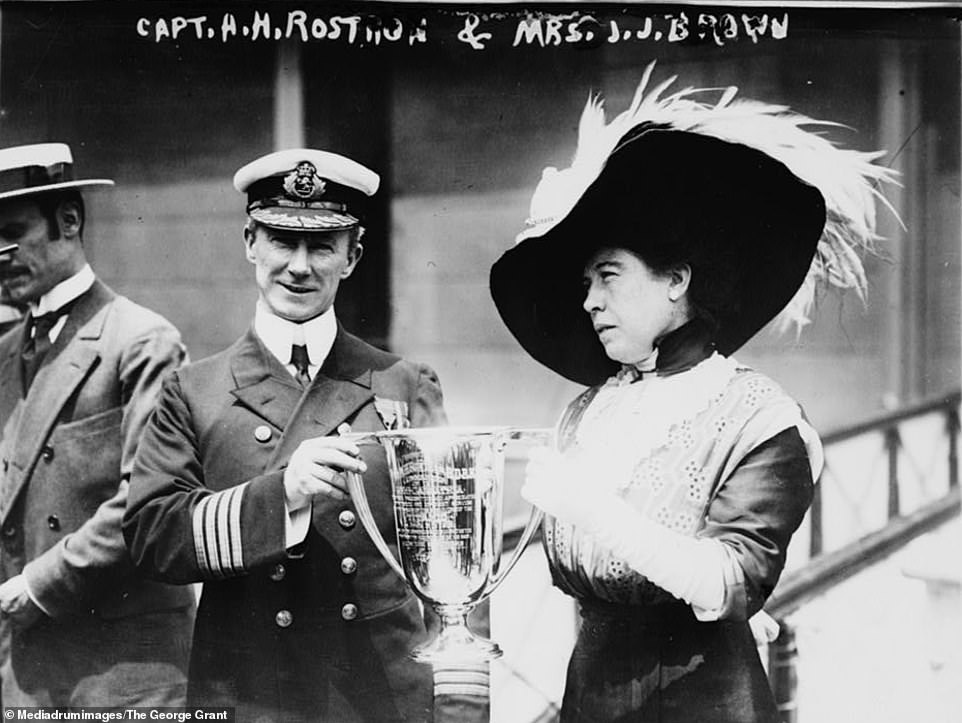 Another image of Titanic survivor Mrs Brown shows her presenting a trophy to Captain Arthur Henry Roston for his service in the rescue of the Titanic, on May 1912. Roston had been captain of the ocean liner RMS Carpathia when it rescued hundreds of survivors from the RMS Titanic after the latter ship sank in 1912 in the middle of the North Atlantic Ocean 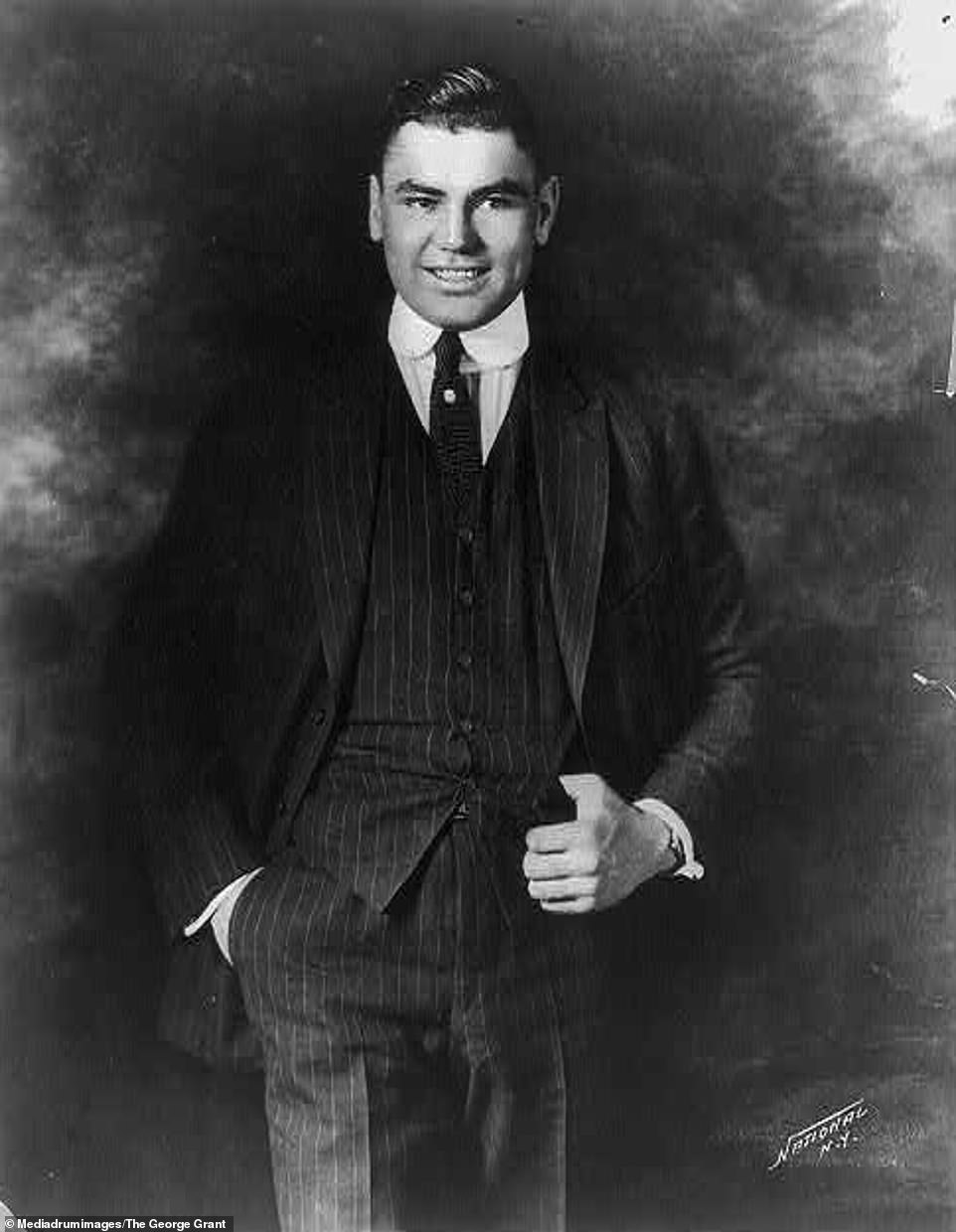 Professional boxer Jack Dempsey is seen posing in a suit in 1895. Dempsey, nicknamed Kid Blackie, and The Manassa Mauler, was an American professional boxer who competed from 1914 to 1927, and reigned as the world heavyweight champion from 1919 to 1926 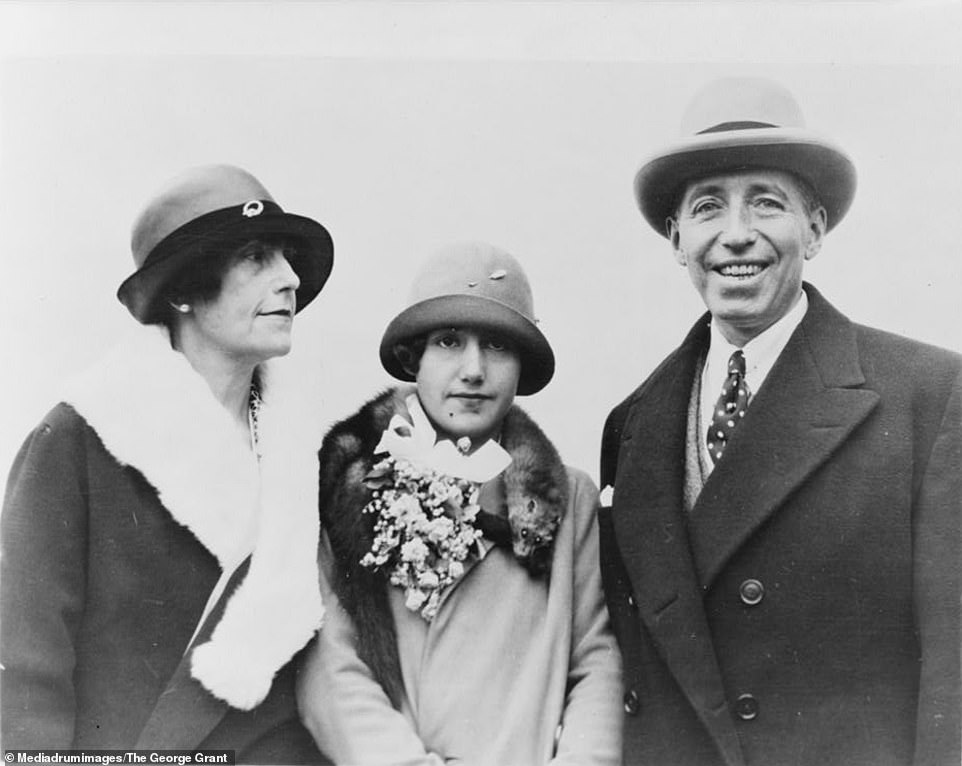 French jeweller Pierre Cartier is another famous face to feature in the selection of pictures. In this photograph from June 8, 1926, he is seen standing with his wife Elma and daughter Marion Claudel. Pierre was one of three grandsons to Louis-Francois Cartier who founded the world-renowned Cartier jewellery brand 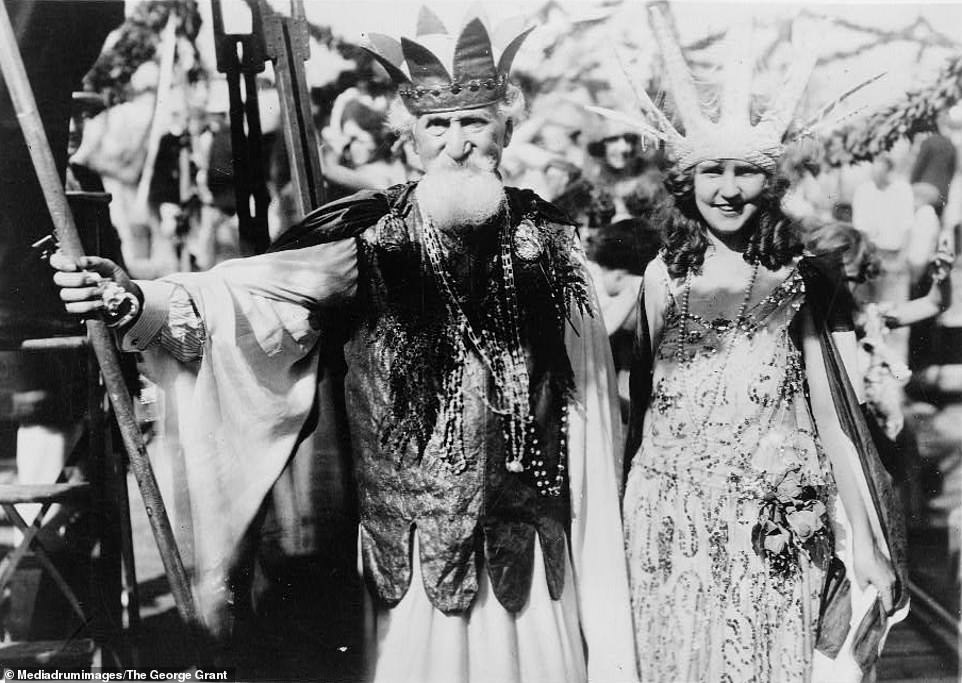 Hudson Maxim, dressed in costume as Neptune, and Miss America Margaret Gorman are seen standing together in this photograph taken at the Atlantic City Carnival on September 7, 1922. Maxim was a US inventor and chemist who was responsible for developing a number of explosives, including smokeless gunpowder. Margaret Gorman was a model and beauty queen who was crowned the first ever winner of Miss America, having previously also been named Miss Columbia in 1921 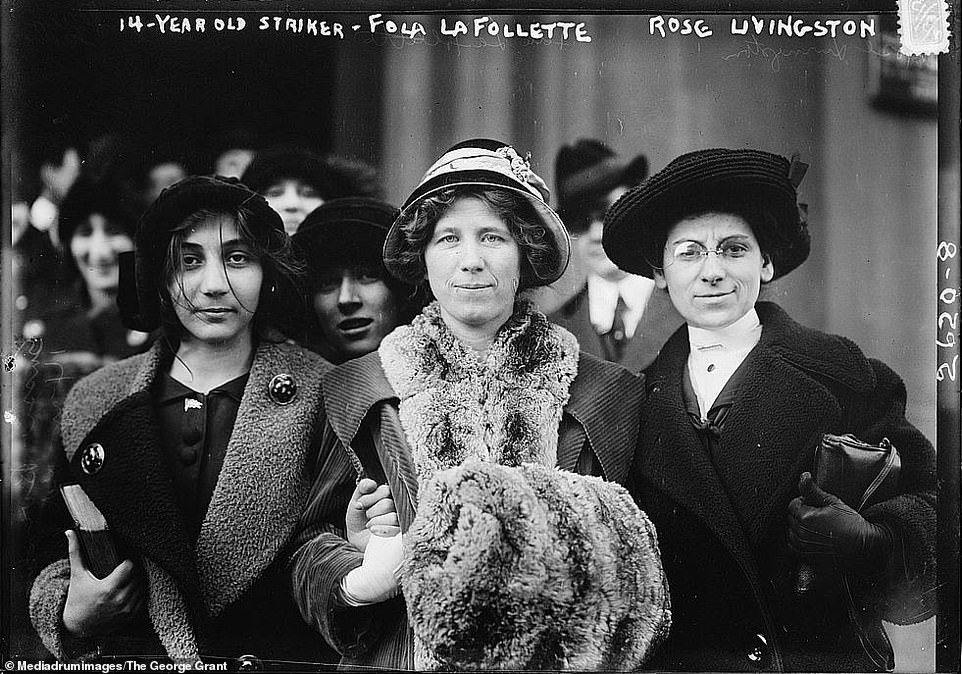 Another image of the suffragettes was included among the Bain News Service photographs. This one, taken in new York City in 1913 shows Flora Dodge ‘Fola’ La Follette (middle) and social reformer Rose Livington (right) stood with two younger suffragettes. The image was captured during a garment strike in the city 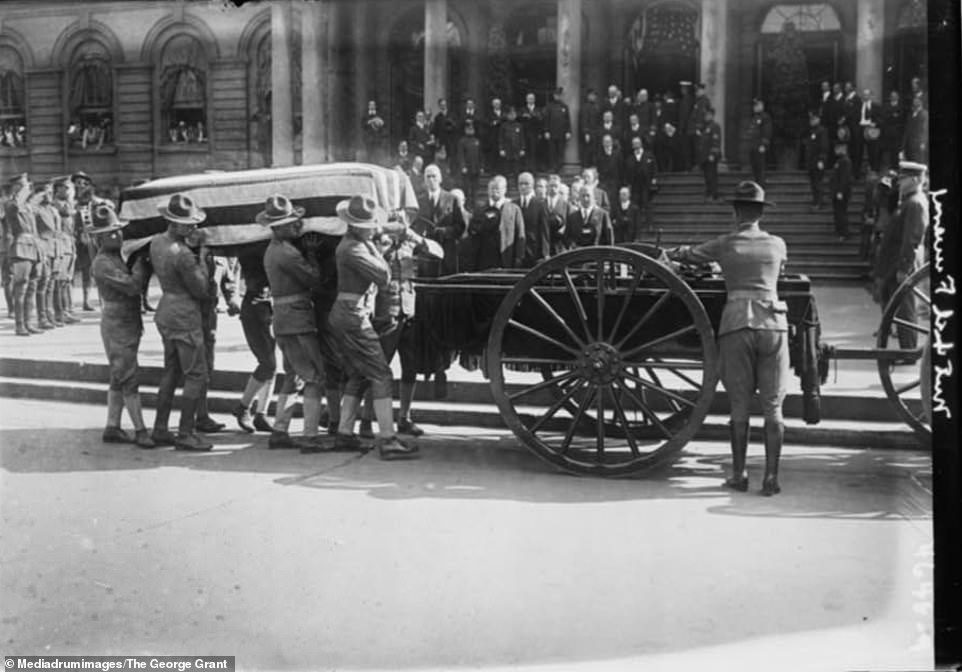 A casket containing the body of former New York City mayor John Purroy Mitchel is loaded onto a wagon in 1918, with former President Theodore Roosevelt seen in the background, amongst other officials, holding their hats in respect for the deceased politician. Aged just 34 when he took office, Mitchel was the second-youngest mayor and he is sometimes referred to as “The Boy Mayor of New York”. he was killed in an aircraft accident in 1918 after his plane nosedived during a short military training flight