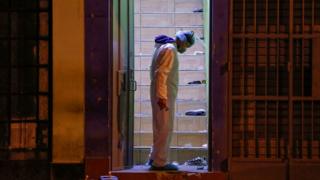 At least 13 people died in a crush in Peru after trying to escape police who raided a nightclub violating coronavirus restrictions, police say.

President Martín Vizcarra said 15 of 23 revellers arrested had tested positive for the coronavirus.

Peru has been among the Latin American countries hardest hit by Covid-19.

A night-time curfew has been in place since March, and a ban on large gatherings was reimposed earlier this month.

Peru’s interior minister said around 120 people had attended the illegal birthday gathering on Saturday. After police raided the club, the partygoers “tried to escape through the single exit, trampling each other and getting trapped in the stairway”. Eleven men and two women aged in their 20s and 30s died.

The ministry says police “did not use any type of weapon or tear gas” during the operation but this was disputed by at least one local resident who told RPP radio: “It appears that police entered and threw tear gas canisters at them, and boxed them in.”

The club’s owners, a married couple, were among those detained. Six people were injured, including three police officers.

President Vizcarra said such large gatherings were common and were posing a serious threat to public health.

“I have sorrow and I have sadness for the people and relatives of the people who have died, but I also have anger and indignation for those who were irresponsible by organising this,” he said, adding: “Please reflect, let’s not lose more lives due to negligence.”

He said all 60 police officers involved in the raid would be tested for Covid-19.

Peru imposed one of the earliest and strictest lockdowns in Latin America to stop the spread of coronavirus – but has still seen cases rise rapidly.