Pierre Assaad was upset and seemed emotional when he met a person he believed was a contract killer in May last year.

His ex-daughter-in-law had “ripped off his son”, he claimed, and he wanted something to be done. 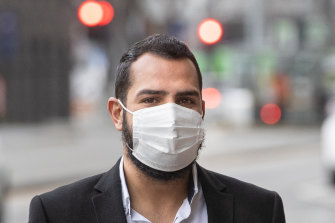 John Assaad, accused with his father Pierre Assaad of conspiracy to murder, arrives at the Melbourne Magistrates Court on Tuesday. Credit:Simon Schluter

Unbeknown to him, the man he just met was an undercover police officer who recorded their conversation.

Snippets from a transcript of that conversation were read to Melbourne Magistrates Court on Tuesday, where Pierre Assaad and his son John Assaad are facing a committal hearing on charges of conspiracy to murder.

Police allege the pair conspired to have John Assaad’s estranged wife and a Christian pastor murdered for $40,000 each last year. The alleged planned killings never went ahead.

An undercover police officer, whose identity has been suppressed, told the court on Tuesday he was recruited to the operation to act as a hitman and identify whether Pierre Assaad was involved in inciting murder.

The pair met for the first time in early May.

“You know why I’m here,” the undercover officer told Pierre Assaad, asking him to put his belongings in the car to give the impression he did not want the meeting secretly recorded.

Reading from the transcript of their conversation that day, defence counsel Rishi Nathwani told the court his client explained he was “upset about his [ex]-daughter-in-law having ripped-off his son” and asked whether they could arrange for her to somehow have her citizenship revoked.

The court heard Pierre Assaad suggested planting drugs on her, so she would get caught and be deported, but the undercover officer told him that could take some time.

“I was trying to tell the accused I couldn’t guarantee an outcome in court,” the officer said on Tuesday.

“You were dissuading him, in fact, to see if you could get him in fact to talk about killing?” Mr Nathwani put to him.

“I disagree,” the officer replied. “I was providing him with the facts of the service I could purportedly provide.”

Pierre Assaad made a gesture of running his finger across his throat, and they began to discuss “having her murdered”, the officer told the court.

The undercover operative told Pierre Assaad he could carry out the killing for $40,000, asking for a deposit of $5000, photos, her address, work information, details about her dog and whether she had security cameras.

“I was purporting to be a hitman and these are the things a hitman would require,” the officer said on Tuesday. “I didn’t encourage him of going down the line of wanting someone murdered.”

“If he wanted to carry out the murder, this is some of the information I would need.”

But the court was told Pierre Assaad began to change his mind and got nervous about the alleged plan to kill his ex-daughter-in-law. He was recorded saying he hoped she would “wake up to herself” and change her ways.

During another meeting between the undercover operative and Pierre Assaad on June 14, the accused told the undercover officer he wanted to delay any agreement about the killing of his ex-daughter-in-law, suggesting it may not go ahead at all.

He never provided a deposit or information about his son’s ex-wife.

But police allege Pierre Assaad did give the undercover officer a $5000 deposit and a dossier of information about a Christian pastor who had helped counsel his ex-wife through their separation.

Pierre Assaad was arrested in late June, charged with conspiracy to murder his ex-daughter-in-law and the pastor, and has since been in jail where he watched proceedings on Tuesday.

His son remains on bail.

The committal hearing will resume on September 16.