Is this the best dad in the world? Doting father gets up before dawn to draw a massive Peppa Pig on the snow-covered ground to surprise his daughter

A doting father wanted to surprise his toddler daughter who loves Peppa Pig, so he drew her the biggest cartoon pig she could ever imagine.

Wang Enshuang, from northern China, got up at the crack of the dawn to create an image of the popular pink piglet on a snow-covered square underneath the girl’s window.

Using a broom, he managed to make a sketch of the British cartoon character measuring 150 square metres (1,614 square feet) on the freezing day. 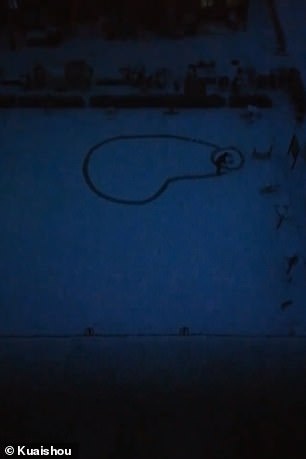 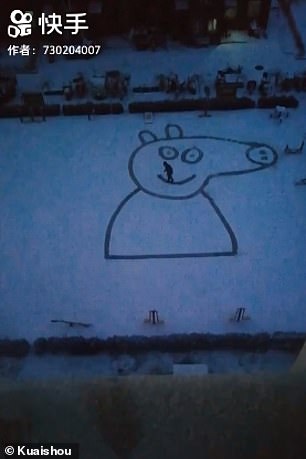 Wang Enshuang, from northern China, got up at the crack of the dawn to create the image

Mr Wang and his family live in the city of Chifeng in the Inner Mongolia Autonomous Region.

The 28-year-old parent said his daughter, Shiqi, was a huge fan of Peppa Pig. The 21-month-old child likes watching the cartoon series while sitting on the window sill in her room.

He came up with the idea after waking up early on December 6. He saw it had snowed heavily and the square outside Shiqi’s room had turned white.

The father quickly got dressed, grabbed a broom and headed towards the door.

‘He is a simple person. He just wanted to make the girl happy,’ Shiqi’s mother Wang Yansu told MailOnline. 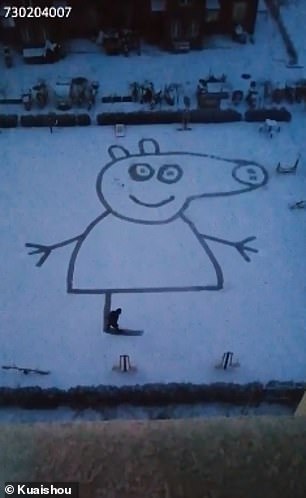 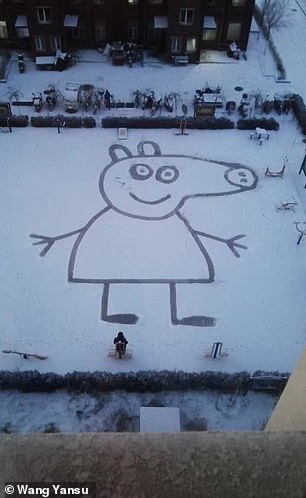 He came up with the idea after waking up early in the morning and realised his city had turned white. He immediately got dressed, grabbed a broom and headed towards the door

In order to draw a vivid picture, Mr Wang downloaded a picture of Peppa Pig on his phone as reference before going downstairs at around 6am.

As Shiqi was still sleeping, Mrs Wang captured how her husband produced the loving gift on her phone.

The 40-second clip, which was later uploaded to Chinese video platform Kuaishou, shows the day gradually becoming light as Mr Wang pushes the snow around with his broom until the ground carries the likeness of the playful pig character.

‘My daughter can’t talk properly now, so she couldn’t express her feelings well. But when she saw Peppa Pig from her window, and after I told her it was drawn by dad, she said she was really happy,’ said Mrs Wang.

The mother said her daughter made sure to check the square outside the window the next few days, hoping to see Peppa Pig again. 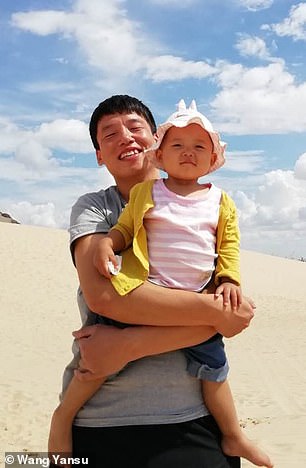 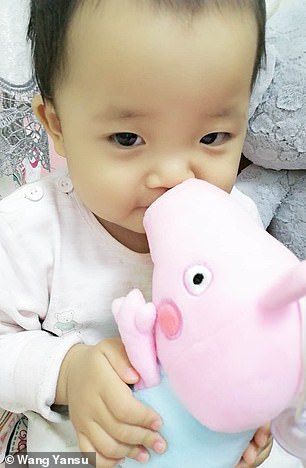 The 28-year-old father (pictured with shiqi, left) wanted to surprise her toddler daughter Shiqi (right) who loves Peppa Pig. The girl often watches the cartoon while sitting on the window sill

The Peppa Pig series, introduced in the mid-2000s in China, has become extremely popular among Chinese children and adults through episodes dubbed into Mandarin.

The country is set to mark the upcoming Chinese New Year with a film starring Peppa Pig. The next year is the Year of the Pig according China’s 12-animal zodiac system.