Knickers! Feminists hit out at M&S displays for suggesting lingerie is a Christmas ‘must-have’ for women while suits are on every man’s wish list

For decades its underwear has been a staple of many women’s wardrobes.

But Marks & Spencer has risked upsetting some of its most loyal customers with a window display for ‘fancy little knickers’ which has been described as ‘vomit-inducing’.

The promotion in Nottingham has been attacked for suggesting knickers are a ‘must-have’ for women at Christmas – while an adjacent display has suits as ‘must-have outfits to impress’ for men. 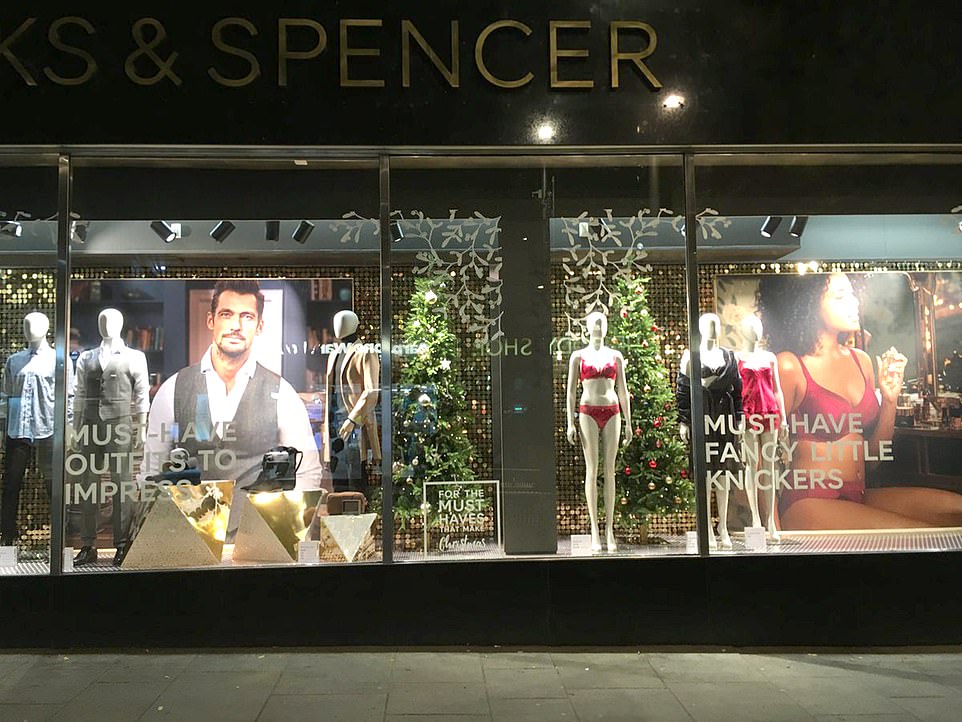 After it was brought to the attention of a feminist group in the city, campaigners altered the display so it read ‘must have full human rights’ rather than ‘knickers’.

Local activist Fran Bailey wrote on the group’s Facebook page: ‘OK, M&S Nottingham, have we really not learned anything in the last 35 years?

‘Or am I alone in finding this, their major window display, completely vomit-inducing?’

She later told the BBC: ‘I think M&S using the slogan “must-have” over Christmas fripperies is very distasteful when true necessities are lacking for many working and non-working people – the true necessities being warmth, shelter and food.

‘I also feel very, very strongly about the representation of women as being preoccupied with fancy little knickers, whereas men are presented as powerful and needing to be impressive. The juxtaposition is grossly offensive.’

Siân Steans added: ‘As a feminist and a mother to a young daughter I felt embarrassed that I had to yet again explain why women are depicted with so little respect.

‘When companies insist on men being fully clothed and women showcasing lingerie only, it sends a message about women’s place in society as objects to titillate.’

M&S said its shops had many different Christmas window displays, and that ones for suits might sometimes appear next to ones for women’s underwear.

It said in a statement: ‘M&S sells more underwear, in more shapes, sizes and styles, than any other retailer, especially at Christmas.

‘Our windows are part of a wider campaign that features a large variety of must-have Christmas moments, from David Gandy washing up in an M&S suit through to families snuggling up in our matching PJs.’