Only 5,000 black rhinos remain in the wild but this incredible footage show two brutally face off against each other.

The encounter begins with the two edging toward each other before the de-horned but larger rhino becomes increasingly aggressive. 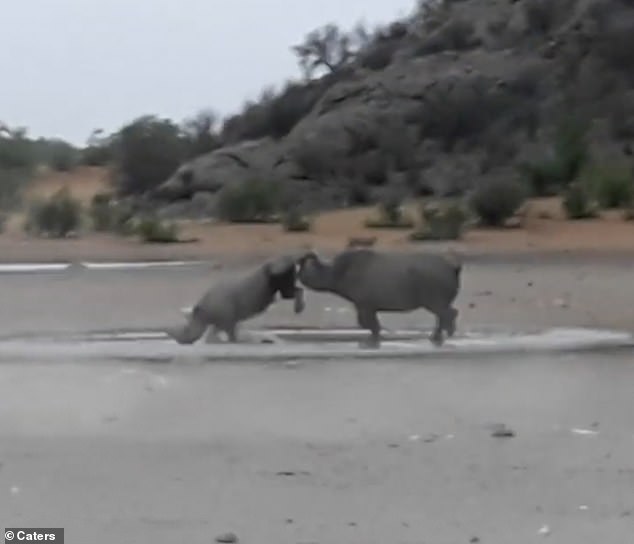 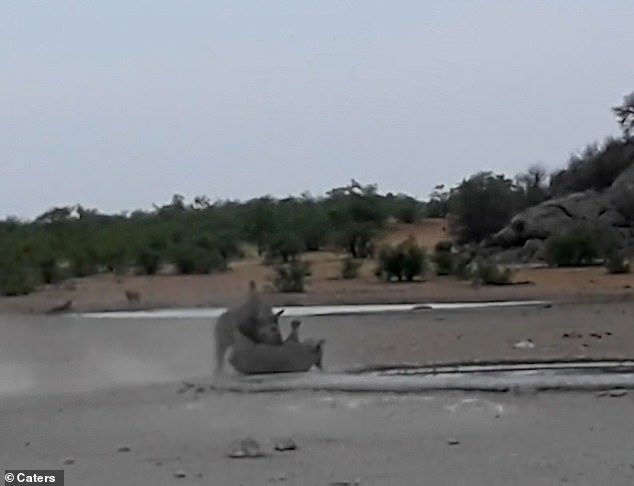 The larger rhino eventually topples the other beast and continues its assault around the waterhole, eventually managing to chase off its challenger.

After the bigger beast manages to push the other rhino over it carries on hitting it, lifting it up off the ground in the process.

The fight continues for a few minutes with both doing their best to send the other on their way.

The larger rhino uses its brute force to push its competitor out of the way as the confrontation intensifies.

The footage shows the tense fight which takes place on an open plain with zebras seen wandering around in the background unaware of the drama unfolding right next to them.

What are black rhinos and why is their population in decline?

Thanks to conservation in Africa, black rhino numbers have doubled from their historic low 20 years ago to between 5,042 and 5,455 today. However, the black rhino is still considered critically endangered.

The majority of the black rhino population is concentrated in four countries: South Africa, Namibia, Zimbabwe, and Kenya.

Black rhinos have been killed in increasing numbers in recent years as transnational, organised criminal networks have become more involved in the poaching of rhinos and the illegal trade in rhino horn.

Uncontrolled hunting in the colonial era was historically the major factor in the decline of black rhinos.

Today, poaching for the illegal trade in their horns is the major threat, according to the WWF.

Powdered horn is used in traditional Asian medicine as a supposed cure for a range of illnesses – from hangovers to fevers and even cancer.

The recent surge has been primarily driven by the demand for horn by upper-middle class citizens in Vietnam. As well as its use in medicine, rhino horn is bought and consumed purely as a symbol of wealth.