Hundreds of police firearms officers are facing the axe over new tougher rules on colour blindness.

Officers were previously only required to carry out one test to screen colour vision deficiency (CVD).

New rules will mean that officers will now have to carry out two – making the ability to pass a lot more difficult. 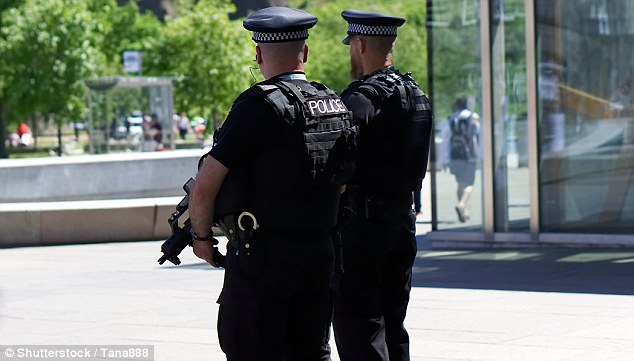 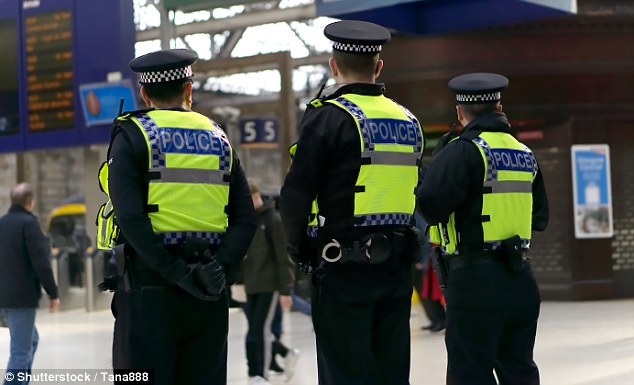 There is often a large police presence during high-profile events. Some of these officers will be armed while others will not

Those who previously identified as having mild CVD will have to re-sit the tests – which involve ensuring officers can operate firearms using a red-dot sight.

If they are unable to pass they are likely to return to duties other than firearms.

Ché Donald, the vice-chair of the Police Federation, has spoken out following the introduction of the new rules.

He told The Guardian: ‘The test is intended to screen out CVD sufferers, yet we know from extensive research studies that the tests used are unreliable and do not achieve the objectives set out by the college and are not a proportionate means to achieving a legitimate aim’.

Not everyone is against the new rules, however. Some have been taking to Twitter to share their thoughts.

One user, called SadButMadLad, said: ‘What about men who can’t be electricians because of colour blindness.

‘So the police don’t want the public to be safe when armed cops are around?’

While another, called A Box of Rain, said: ‘As someone who has non-standard colours in order to do your job and not endanger people that needs to be accounted for.

‘What would be discriminatory would be if they did not make every effort to ensure that – for example safe use of tasers did depend on being able to accurately track a small red dot.’ 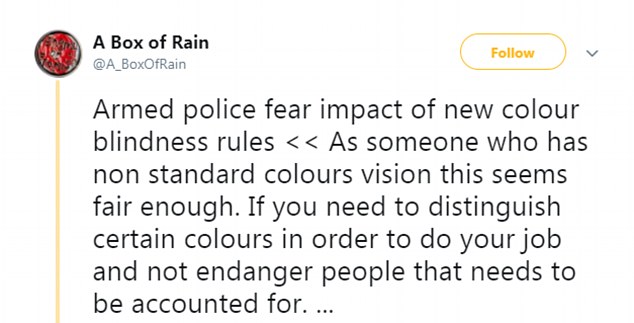 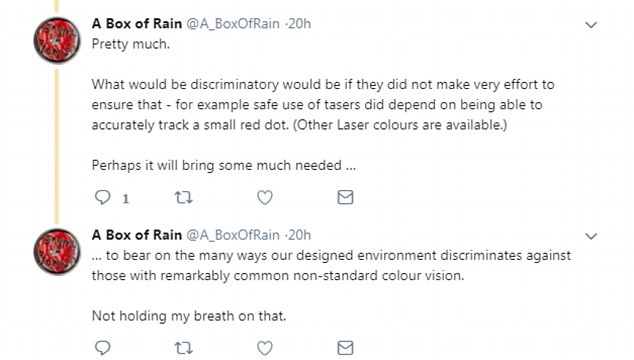 Despite this, there are concerns that a recent surge in the number of armed officers could all be undone.

Numbers in England and Wales had increased following a recent string of terrorist attacks in Europe.

Mr Donald said: ‘This single handedly could destroy the uplift. Hundreds will be affected.

‘This is because CVD is mainly prevalent in the male population and firearms units are still predominantly composed of male officers and CVD affects one in 12 men (8%) and one in 200 women.

The change was introduced by the College of Policing, which sets the rules for officers across England and Wales.

A spokesman for the College said: ‘The key points which the standards establish are the ability to identify a subject based on a description, of which colour could be a significant factor, particularly where this may lead to pre-emptive use of force or officers using lethal force or firearms, and the ability to operate firearms with a red dot sight system.

‘However, the testing which officers have to undergo if they fail screening, was updated last year.

‘The changes do not exclude all officers with colour vision deficiency but only those below a certain threshold.

‘The standards were reviewed based on the role, equipment and expert technical and medical advice on colour vision deficiencies.’