This is the incredible moment firefighters rescued a thief who almost suffocated after getting trapped inside a steakhouse chimney.

It took rescuers more than four hours to free the trapped 41-year-old who was pulled out head first, covered in oil and soot, and suffering from dehydration and hypothermia. 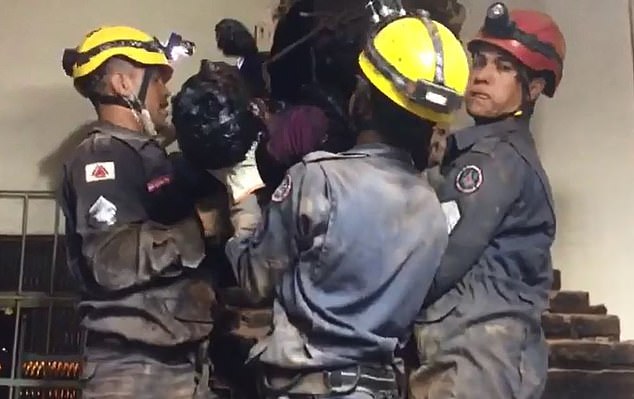 The Churrascaria steakhouse, situated in a motorway service station, had already closed for business when the trapped man was found.

He was only discovered after muffled cries for help were heard by a woman passing the bistro around midnight on Wednesday, October 10.

She then called the police, who arrived with the owner to find the man’s dirty white socked feet poking out of the bottom of the fireplace.

Officers said he is known to them and has a string of convictions for stealing.

Police were filmed putting a wooden crate and upturned metal cooking pot underneath the dangling toes to allow the stranded man to ease the strain on his trapped body. 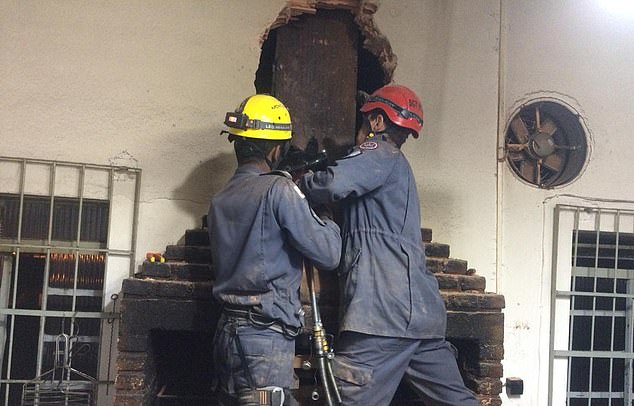 Emergency crews in Machado, south east Brazil, lifted Luciano de Oliveira out of the wall after smashing open the brickwork

The smokestack, used as a barbecue range, is embedded inside a brick hearth and has a wide aperture at the top tapering to narrow a vent at the bottom.

Emergency crews used sledgehammers to break into the difficult to reach area, securing the metal funnel with a rope tied to a nearby window grill to stop it from collapsing.

The would-be burglar reportedly climbed onto the roof of the restaurant believing he could enter the premises through the outlet. He slid down the vent but got stuck as it narrowed.

‘We don’t know how he managed to get onto the roof and into this confined passage. At the beginning we thought we could pull him out from the top but realised the restrictions in the funnel meant we wouldn’t be able to dislodge him from above.’ 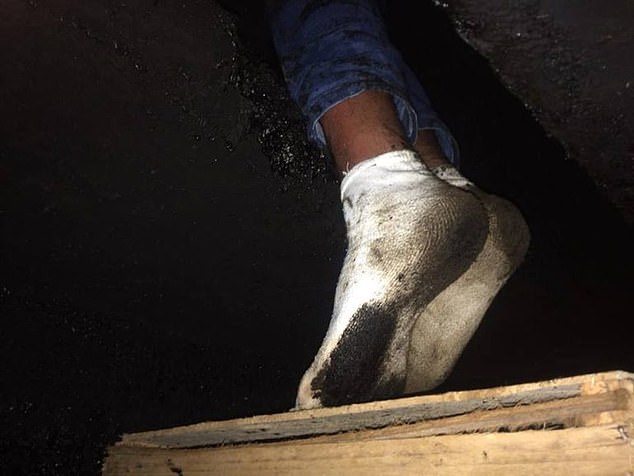 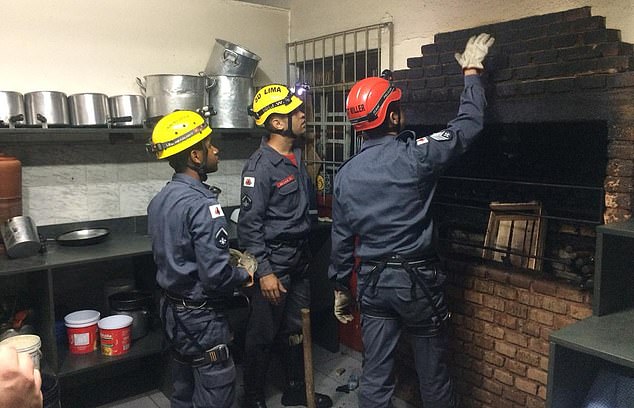 Fire crews assessed the situation and decided the only way to rescue Mr de Oliveira was to hack through the brick work inside the kitchen.

Sergeant Miller said: ‘We had to be careful because there was a risk the chimney would fall down.

‘We secured the metal chamber with rope and used sledgehammers to break through the wall then cut a section from the steel to get him out.’

Police said the suspect was immediately remorseful and admitted he had entered the restaurant to rob it.

‘He confessed he had entered the place to rob it and admitted he had carried out another burglary at a local supermarket the week before,’ an officer said. 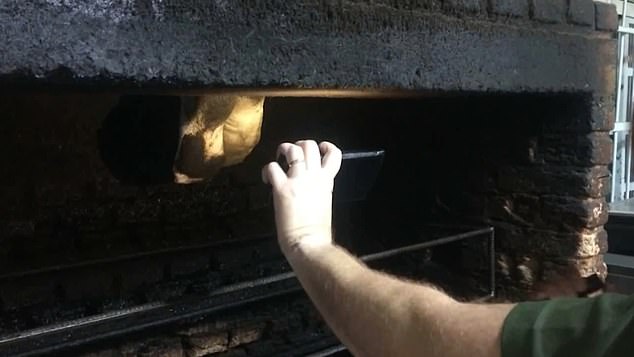 The would-be thief was taken to Machado Municipal Hospital and will be kept under police guard until his transfer to a detention centre. He is said to be in a serious condition.

The steakhouse owner, who didn’t want to be named, said despite the gaping hole left in his kitchen wall, he was glad the suspect was rescued alive.

‘It appears he forgot he was several weeks too early for Christmas and instead of bearing gifts, he came planning to steal from my establishment,’ the businessman said.

‘Luckily someone heard his cries otherwise he could have stayed there all night until I opened the following day. If that had happened the outcome could have been fatal.’