Grin and bear it: First sun bear cub ever to be born in the UK comes out to play with its mother for the first time and struggles to stay on its feet as it takes a few tumbles

The first sun bear cub ever to be born in the UK has emerged from its den for the first time.

The new addition, which does not yet have a name, was captured on video as she took a stroll with her mother Milli at Chester Zoo.

The 12-week-old cub took a few tumbles as she explored her indoor habitat at the zoo before heading back to the den. 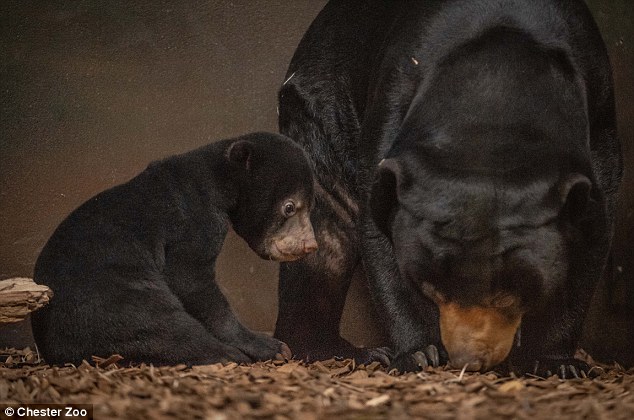 The 12-week-old cub, who was born on June 13, took her first stroll around her den at Chester Zoo, in Cheshire 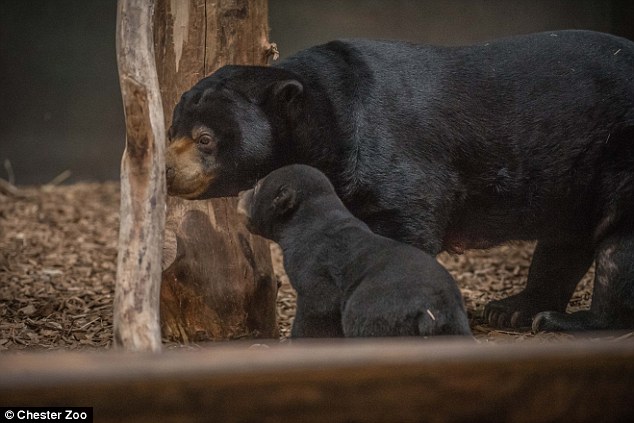 Curator of Mammals at Chester Zoo Tim Rowlands said: ‘The new cub has plenty of enthusiasm but, at just 12 weeks old, she’s still somewhat wobbly on her legs.

‘She’ll soon find her feet though and it won’t be long until mum Milli really has her paws full.

‘Her little one will quickly gain in confidence, become more and more excitable and look to explore. That’s when her parenting skills will be given a new test.’

In the video, the tiny bear can be seen exploring her home and playfully biting mother Milli’s ear as they snack on carrots together. 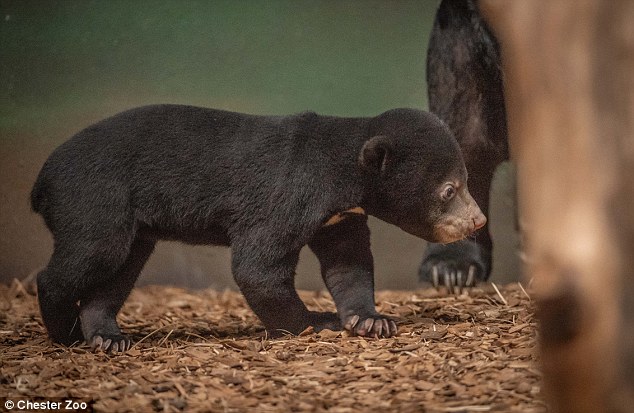 The baby bear is the first sun bear to have been born in the UK, something collections director Mike Jordan has called ‘the shining beacon of light at the end of a dark tunnel’ 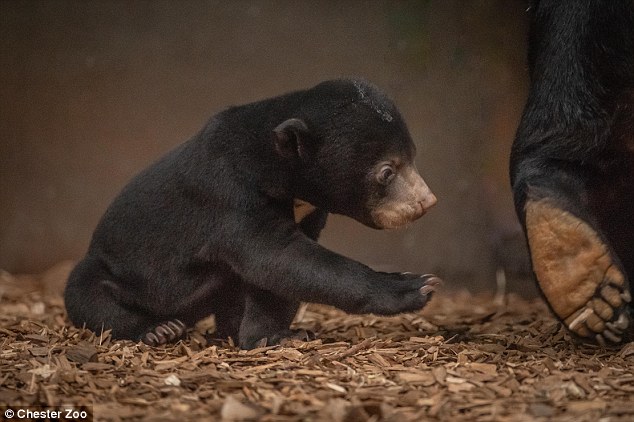 Weighing 14 ounces at birth, the new cub is yet to be named by zookeepers at Chester Zoo 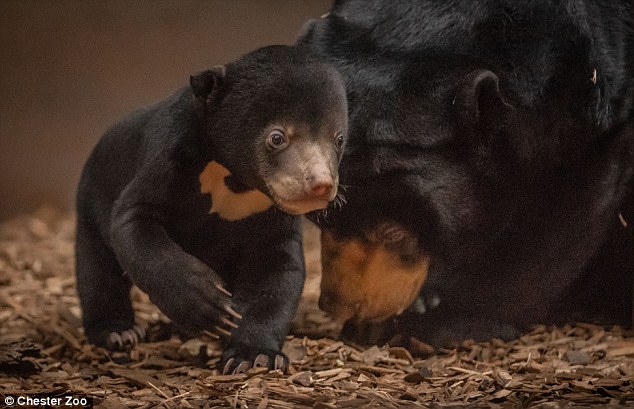 The new addition was born earlier this year on June 13, weighing 14 ounces.

The cub’s parents, Milli and Toni, came to the zoo in 2013 after being rescued from illegal wildlife traders in Cambodia who had killed their mothers and kept them as pets.

Mike Jordan, Collections Director at the zoo, said: ‘These bears had a really tough start to life and so to now see Milli thriving with a cub is ever so special.

‘It’s the wonderful culmination of an awful lot of hard work by numerous conservationists – here and in Cambodia – who have fought to give her a brighter future.

‘The cub is the shining beacon of light at the end of what, at one stage, was a very dark tunnel.’

Sun bears are the smallest of the world’s eight species of bear but are highly threatened in their native south-east Asia and are thought to be extinct in Singapore, where they were once found in large numbers.

Why are sun bears so at risk?

According to the Bornean Sun Bear Conservation Centre (BSBCC), the total sun bear population has declined by at least 30 per cent in the last 30 years, causing them to be classified as ‘vulnerable’. The animals face three main are danger due to three main threats: