Hong Kongers have been remembering key events from the months of anti-government protests that overwhelmed the city last year as democracy activists accuse authorities of trying to re-write history.

On Monday some citizens attempted to leave bouquets of white flowers outside a metro station to mark the anniversary of a controversial night of the movement, but they were quickly removed by authorities.

Last week there was an outcry when an opposition lawmaker was arrested and accused of “rioting” in another key incident in July 2019 where mob violence had left him wounded and hospitalised.

As arrests keep mounting over the 2019 demonstrations, we look back at some of the defining moments of the pro-democracy movement. 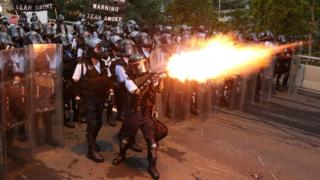 The protests began as peaceful demonstrations against plans to allow extraditions to mainland China. On 9 June an estimated one million people rallied on the streets in a sign of the growing and vast opposition to the proposed bill.

But the government was unwilling to engage with protesters and three days later the mood shifted. When a small group of mostly young protesters hurled bricks, water bottles and umbrellas at police during one tense confrontation, the ferocity of the officers’ response shook Hong Kong.

Police fired volleys of tear gas and rubber bullets, used for the first time in decades, into the crowd. In chaotic scenes screaming protesters ran to escape a closed-off road, eyewitnesses say they narrowly avoided a stampede. Videos showed unarmed protesters who posed no threat to the police being beaten by heavily armoured officers. And in striking interventions, ordinary citizens were seen asking police not to harm the youth.

“It was an important turning point for the movement,” said Leung Kai Chi, a lecturer in Chinese studies at the Chinese University of Hong Kong. “There was a sense that justice has to be served and police have to be held to account.”

The next day Hong Kong’s police chief defended his officers. He said they had been “restrained” and used an appropriate amount of force. 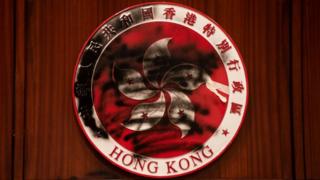 In one of the most brazen and symbolic acts of the protests thus far, a group of activists smashed through Hong Kong’s parliament after an hours-long siege.

Hundreds of people who broke away from a mass rally against the 22nd anniversary of the city’s return to China from Britain stormed into the Legislative Council.

Once inside, the protesters spray-painted defiant messages on the walls, tore down portraits of city leaders and unfurled a colonial-era flag in a clear political statement to leaders in Hong Kong and Beijing.

Holmes Chan, now a freelance journalist, was reporting on the scene that night for Hong Kong Free Press. He said that even though there was “a lot of agonising and soul-searching” among protesters on whether to enter, there was “a sense of unity” as they used the debating chamber to articulate their five core demands including universal suffrage.

This day is viewed by many as transforming a protest against an extradition bill into a much wider movement for greater democracy.

As scenes of the storming were beamed around the world, the Hong Kong government was swift to denounce the act as vandalism, Beijing called it “totally intolerable”. 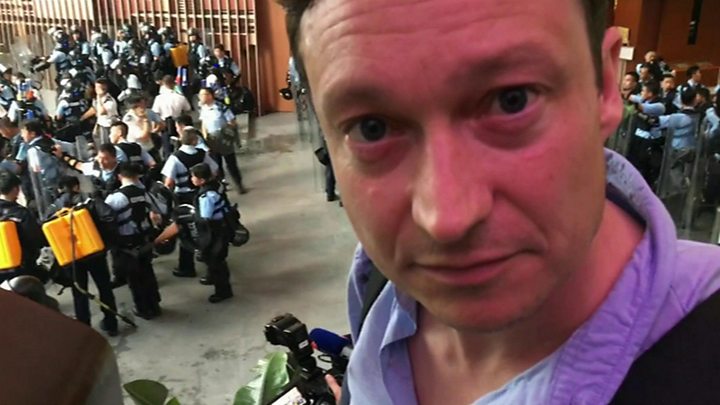 What was surprising, says Mr Chan, is how the usually law-abiding Hong Kong public broadly sympathised with protesters desperate to have their voices heard. “It was a very important moment that galvanised the whole movement,” he said.

Dr Leung remembers watching the events unfold on a live broadcast. There were four protesters who didn’t want to leave before police eventually stormed in at around midnight. The others came back for them, saying “‘we get in together, we get out together. That moment was very touching”, he said. 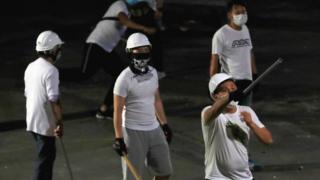 The 721 incident, as it’s known in Hong Kong, is seen as one of the most defining moments of last year’s protests.

The violence, which left dozens of protesters and bystanders injured, marked a critical turning point in how many of the public viewed the police, who were late to arrive at the scene.

At the time police said they were entangled in other rallies, as protesters accused them of failing to offer protection against attackers suspected to be triad gangsters.

But in a new development last week the police defended its response after arresting a prominent opposition lawmaker. Lam Cheuk-ting was accused of “rioting” in an incident that saw him attacked and hospitalised. Speaking at a news conference, a superintendent claimed events that night took place between “evenly matched” rival groups.

The police response has enraged activists who now accuse officials of re-writing history and changing the narrative of an event that was filmed on mobile phones and shared widely on social media.

It will not be possible for authorities “to distort the facts of the 721 incident” unless they close down Facebook and YouTube, wrote Gwyneth Kwai-lam Ho, a then journalist who was injured while live-streaming the attacks. 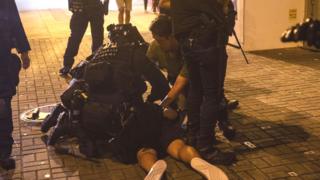 Eyewitnesses said police targeted suspected democracy protesters clad in black but other passengers too were swept up in one of the most controversial nights of the protests.

“My head wouldn’t stop bleeding,” Joseph, a high school student on his way home from a rally, told AFP in June of the incident last year that saw him launch a civil suit against the police for a wound inflicted by their batons.

But the events of that night remain seared in the minds of many Hong Kongers with ongoing tributes to those injured through artwork and flowers left outside the station. 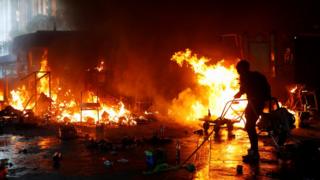 By mid-November university campuses had turned into fiery battlegrounds in some of the most dramatic scenes of the movement.

Laurel Chor, a freelance photojournalist, remembers the “post-apocalyptic feel” at Hong Kong Polytechnic University in a nearly two-week siege that began on 17 November.

Intense battles broke out between protesters and the police after the latter sealed off the campus. The air was thick with smoke as officers deployed tear gas and rubber bullets. Protesters fought back with catapults, Molotov cocktails and bows and arrows.

Police said they were conducting a dispersal and arrest operation, accusing those inside of rioting, a charge that can mean up to 10 years in jail.

Dozens staged daring escapes. “We saw kids trying to escape by crawling through the sewage tunnels, protesters propelling from a bridge down to a highway where motorbikes were waiting for them,” says Ms Chor, one of several journalists camped inside the campus alongside protesters to document the siege.

Eventually more than 1,000 mostly-young activists were arrested, as they attempted to flee or surrendered. When they left the campus in ambulances, some wrapped in emergency blankets, Ms Chor says it brought home just how young some of the protesters were, their parents waiting outside after pleading with police to keep them safe.

“It kind of revealed how this narrative of these clashes between equal parties is just not true,” she said.