Attacks took place close to Manchester Arena, which was targeted by a suicide bomber in 2017. 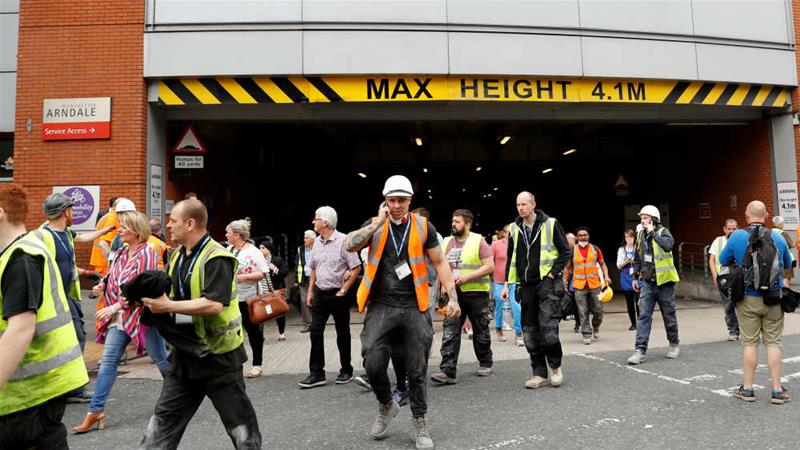 Counterterror police are investigating after a man armed with a knife ran through Manchester’s Arndale shopping centre “lunging at people”, seemingly at random.

Five people were taken to hospital with stab wounds following the attack at about 11am local time on Friday.

Police said a man in his 40s – who was arrested at the scene on suspicion of serious assault – remains in custody for questioning.

As panic spread, shoppers, some with injuries, sought refuge hiding in stores.

One shop worker, who gave his name only as Jordan, 23, told the PA news agency: “A man was running around with a knife lunging at multiple people, one of which came into my store visibly shaken with a small graze.

“Soon after, security staff told all retail staff to close their doors and move the public to the back of the stores.”

A spokesman for Greater Manchester Police said: “We can confirm that five people have been stabbed and taken to hospital.

“In these early stages, we are keeping an open mind about the motivation of this terrible incident and the circumstances as we know them.

“Given the location of the incident and its nature, officers from Counter Terrorism Police North West are leading the investigation as we determine the circumstances.”

Social media posts showed a large number of police officers at the scene.

The North West Ambulance Service said it attended after being called at 11:17am to a stabbing incident.

The service did not give details on the severity of the injuries.

Jordan, who has only been working at the centre for a few months, said the attack took place on the ground floor.

Freddie Houlder, 22, from Market Drayton, was in Arndale Centre when he heard “a load of screams just outside” the shop he was in.

Houlder added: “Luckily she had quite a thick jacket – she thought originally it was a fake knife because of how easily it grazed off but police came in and said it was a real knife and she burst into tears.”

He said he was evacuated several minutes later at which point he saw “a bunch of curtains covering someone seriously injured or dead, I don’t know”.

“I definitely don’t think it was gang violence because this guy was going around trying to stab random people, I believe.”

Prime Minister Boris Johnson said he was “shocked by the incident and my thoughts are with the injured and all those affected”.

“Our thoughts are with the five people injured.

“The scene has been secured and all emergency services are engaged in ensuring public safety – the investigation is ongoing.”

The Arndale Centre is just a few hundred yards from the Manchester Arena and Victoria railway station – both of which have been the scene of recent attacks.

Twenty-two people were killed in May 2017 when Salman Abedi detonated a suicide bomb in the Manchester Arena following an Ariana Grande concert – the youngest victim was just eight years old.

Last New Year’s Eve, three people including a police officer, were seriously injured after a 25-year-old man launched a knife attack on passers-by.

In 1996, the Arndale Centre was damaged in a major bomb attack by the IRA in which a 1,500kg explosive device loaded on a truck was detonated on Corporation Street.

More than 200 people were wounded in the explosion, although there were no fatalities.