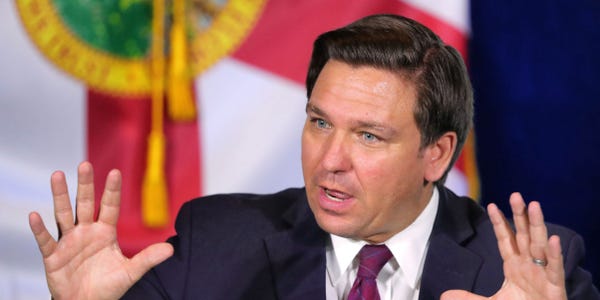 Florida Gov. Ron DeSantis on Monday unveiled a new proposal targeting protesters in the state, introducing, among other changes, new penalties for demonstrators who block roadways or topple monuments.

The proposal, if passed into law, would also absolve a person of liability for killing or injuring someone with their vehicle if they were "fleeing for safety from a mob."

As The New York Times previously noted, the tactic, where an individual drives their car into a crowd of people, has previously been associated with extremist groups like ISIS and Al Qaeda. To date, the most notable incident in the US occurred in 2017 when a white supremacist drove his car into a crowd of counterprotesters at a "Unite the Right" rally in Charlottesville, Virginia, killing 32-year-old Heather Heyer.

It has been seen more recently at anti-racism and anti-police brutality demonstrations across the US following the May 25 police killing of 46-year-old George Floyd in Minneapolis, At a September 7 protest in Rochester, New York, a video showed a person spray Black Lives Matter demonstrators with a yellow substance before striking one of them with their vehicle. Between May 27 and July 9, drivers in the US had hit protesters with their cars 66 times, according to the University of Chicago's Project on Security and Threats.

The tactic has also been sometimes used by US police forces. At the end of May, a viral video showed officers of the NYPD ramming their cruisers into a group of protesters at a demonstration in Brooklyn. Seven of the 66 reported instances from May to July were committed by police, according to the report.

The proposal from DeSantis would crack down on protesters while creating more protections for individual officers, as well as for police departments at risk of losing local funding.

Florida cities that enact any legislation aimed at reducing funding allocated to their police forces amid activists call to "defund the police" would have their access to state grants and aid revoked, according to his proposal.

DeSantis also calls for a mandatory minimum six-month sentence for a person convicted of striking a law enforcement officer "during a violent or disorderly assembly." According to the proposal, a violent or disorderly assembly would be defined as an instance where a group of seven or more people "are involved in an assembly and cause damage to property or injury to other persons."

The Republican governor's plan would also deny an individual bail until their first court appearance should a person be arrested and charged with a crime related to such an assembly.

Micah Kubic, executive director of the ACLU of Florida, called the proposal "undemocratic and hostile to Americans' shared value" in a statement Monday.

"This effort has one goal: silence, criminalize, and penalize Floridians who want to see justice for Black lives lost to racialized violence and brutality at the hands of law enforcement," he said.

He continued: "Under the guise of protecting public safety and residents, this proposal would deny fundamental due process to protesters by eliminating their right to bail. Instead of addressing the violence protesters in cities across the state have been subjected to at the hands of law enforcement, Gov. DeSantis is doubling down on his disdain for dissent. This is not what democracy looks like."

The Florida governor's office did not immediately respond to Insider's request for comment.