Football photographer has shoe laces tied to a fence

Foul! Moment football photographer discovers prankster has tied him to a fence by his shoelaces while he is snapping Irish League match

This is the hilarious moment a football photographer struggled to free himself after someone tied his shoelaces to a fence.

Bill Guiller found himself calling for help in the middle Larne FC’s match at Inver Road, Northern Ireland after someone pulled the prank on him.

Footage shows the 55-year-old snapper lying on grass at the edge of the pitch taking photos of the game against Warrenpoint last Friday.

But with the game going on in front, someone at the ground had managed to sneak up behind Bill and tie his shoelaces to the sidelines.

It was until minutes later that he realised and found himself unable to get up.

Footage of the prank shows Bill getting some help from another member of staff and a volunteer at St John’s Ambulance in order to free himself.

The photographer did however see the funny side, last posting a video of the prank with the caption ‘When they tie your laces to fence at Inver Park’ followed by a laughing emoji. 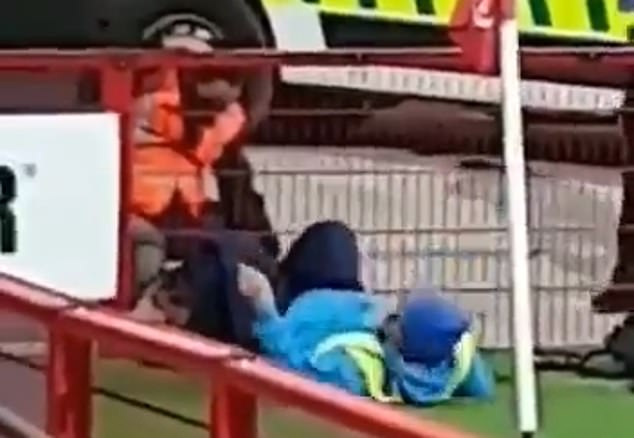 Bill Guiller found himself calling for help in the middle Larne FC’s match at Inver Road, Northern Ireland after someone pulled the prank on him

He added that the prank helped show off the team’s ‘good Irish banter’, but said he would be more alert in his wellies next time.

Bill’s son Chris also commented on the prank, saying ‘ya know what? If it was me I’d be doing it with cable ties’.

Larne FC, who are fourth in the Irish League, won the match 5-0.