Will Britain enjoy an Indian summer? Icy frost, mist and heavy rain are set to blight country this week… before UK basks in warm September sunshine

For those seeking a return to the glorious red hot days of June and July, it’s not quite what they were hoping for.

Although it’s still August, forecasters are predicting ground frost and mist as temperatures in parts of the West Midlands, Wales and North West England could fall to just 37F (3C) tomorrow and Thursday nights.

Meanwhile, daytime weather is set to have a distinctly average feel, with a mixture of cloud and sunny spells, and temperatures set to reach 70F (21C) – plus up to 0.6in (15mm) of rain in an hour tomorrow morning in the South. 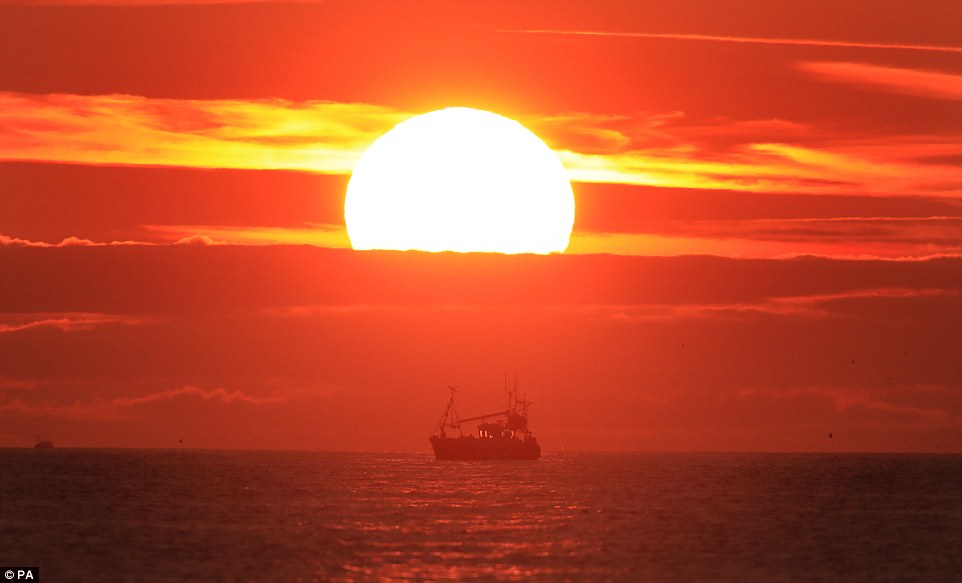 And a weak weather front is set to bring rain from the north early tomorrow, turning showery as it moves south east. But there is some good news, with an area of high pressure set to build from the end of the week.

Forecasters say we could see warmer-than-average conditions next week with temperatures rising to 82F (27C) at best and a possible return to drier and more settled weather as Britain enters meteorological autumn.

The country will see increasing amounts of sunshine and slightly warmer temperatures from Friday, which could reach 75F (24C) in the South by Saturday and 21C (70F) in the North. Sunny spells are due to continue into Sunday.

Met Office forecaster Nicky Maxey said: ‘We’re looking at the potential for high pressure to start building from the start of next week, which could indidicate we’re going to return to more settled conditions.’ 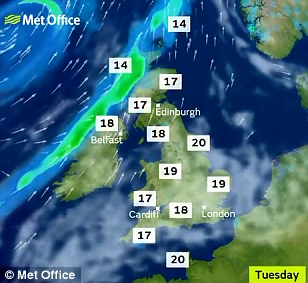 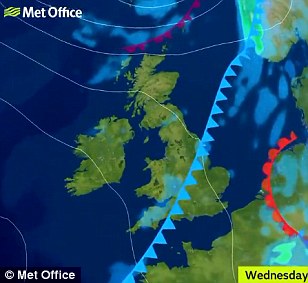 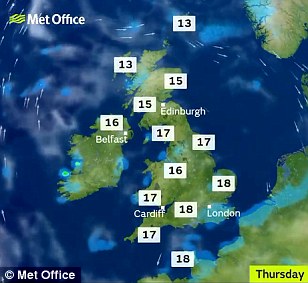 Daytime weather this week is set feel average, with a mixture of cloud and sunny spells, and temperatures up to 70F (21C)

However, she cautioned that the conditions will be determined by where the high pressure system sits, adding: ‘At the moment confidence isn’t particularly high – we’re not saying it’s definitely going to happen.’

Prices of vegetables, fruit, meat and dairy products could rise by at least 5 per cent following a year of extreme weather, experts warn.

The Centre for Economics and Business Research (CEBR) suggests the combination of the big freeze seen earlier this year and the recent heatwave is likely to add around £7 a month to food bills.

It predicts this will add up to a total of £45million – at a time when wage increases are barely keeping pace with the cost of essentials such as petrol and energy bills.

The warning comes after food industry experts said earlier this month that root vegetables were ‘cooking in the fields’.

The Met Office’s long-range forecast for the middle of September predicts ‘a good deal of dry, warm and settled weather’ – interspersed with some spells of wet and windy conditions.

Met Office forecaster Simon Partridge said: ‘The air has been coming from the south and west, but the winds are due to come around to more of a north-westerly flow over the next few days, bringing chilly nights with the possibility of some localised ground frost.

‘Towards the end of the week, prevailing winds come back round to the south and south westerly directions and high pressure is likely to build. We’re looking at temperatures in the low to mid 20Cs (mid-70Fs) in southern areas by the time we get to Saturday.’

Mr Partridge said there will be a lot of cloud around in the meantime, caused by weather fronts attempting to push across the UK but running into an area of high pressure to the south and east. The band of rain tomorrow is due to an area of low pressure to the North West of Britain.

Temperatures over the coming days are set to be around 68F (20C) to 70F (21C) in the South but could be as low as just 61F (16C) in North West England and North Wales tomorrow and Thursday.

However, next week is predicted to be ‘more widely settled’ with dry and sunny weather in central and southern areas – although more wind and rain is expected at times in the North and West.

Yesterday, a drier Bank Holiday Monday salvaged the long weekend after a soggy Sunday meant a washout for much of the UK. The mercury reached 68.9F (20.5C) in Suffolk, which is around the average for this time of year.