Fairway to heaven: Prize-winning above-par property with spectacular views which used to be golf course clubhouse goes on the market for £3m

A ‘slice of paradise’ in the Devon countryside is being sold after it was converted from a 1930’s golf clubhouse to a stunning five-bedroom home.

The Golf House – formerly ‘The 19th Hole’ – was once a meeting point for golfers after a game. But now, the three-storey glass and oak frame building is a luxurious home with stunning views of its surroundings.

Complete with a helipad, a hot tub and an infinity pool the £3million pad in Kingswear, Devon is placed on a sloping hill, allowing occupants to enjoy stunning views.

The home overlooking the River Dart was a golf course in the 1930s designed by local entrepreneur, Alfred Roberts.

The clubhouse was for his newly-formed Kingswear and Dartmouth Golf Club but it did not last long.

At the outbreak of the Second World War, the course was given over to the war effort and the land was ploughed and sown with crops. 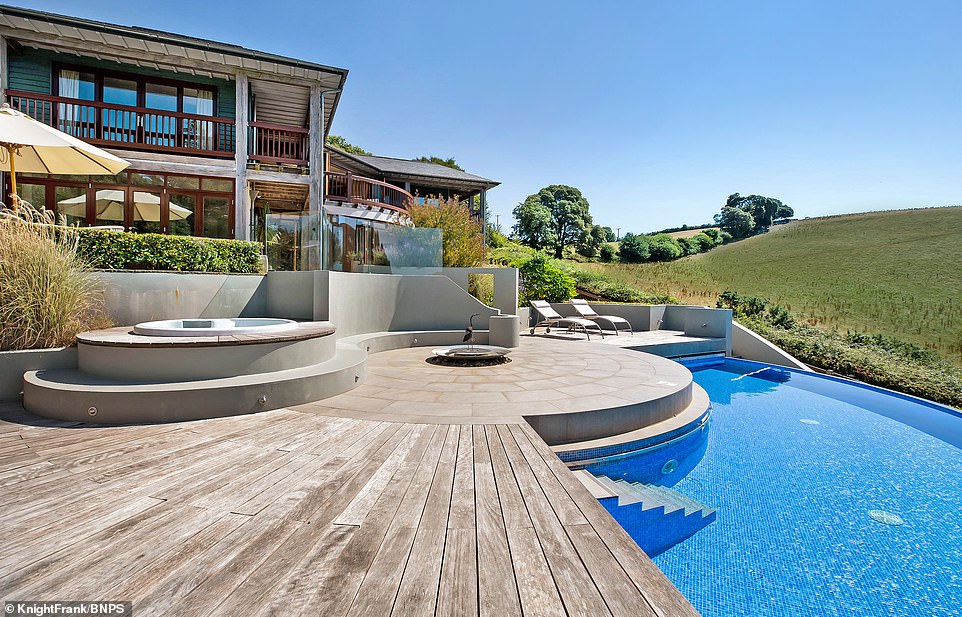 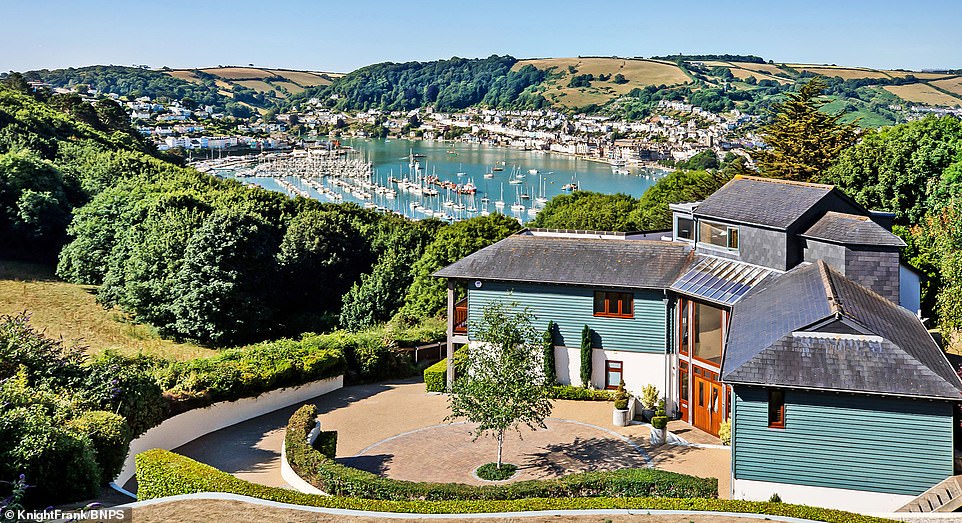 The spectacular home which was once known as the 19th hole is extremely private, surrounded by land and tall greenery 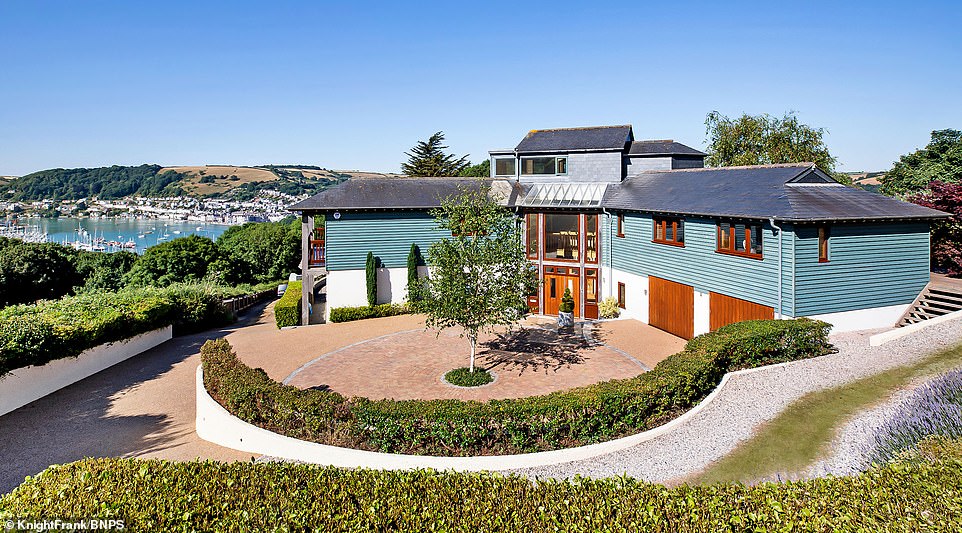 The home boasts huge windows to look out of the rive on one side and the lush green former golf course on the other. The paved driveway to the £3million home offers plenty of parking, along with two garages 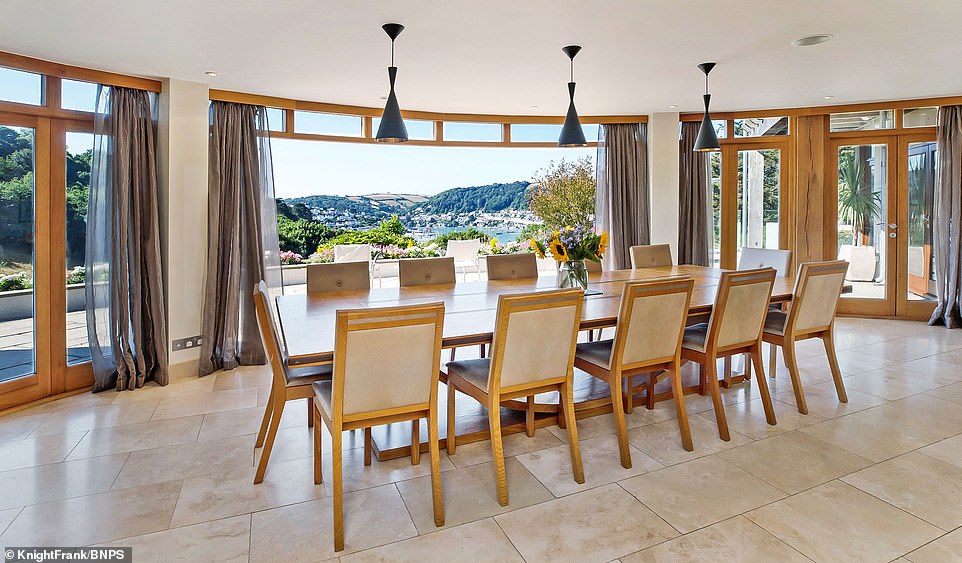 Dinner with a view: The 19th hole home offers stunning views from inside and out with door which can open out in fair weather 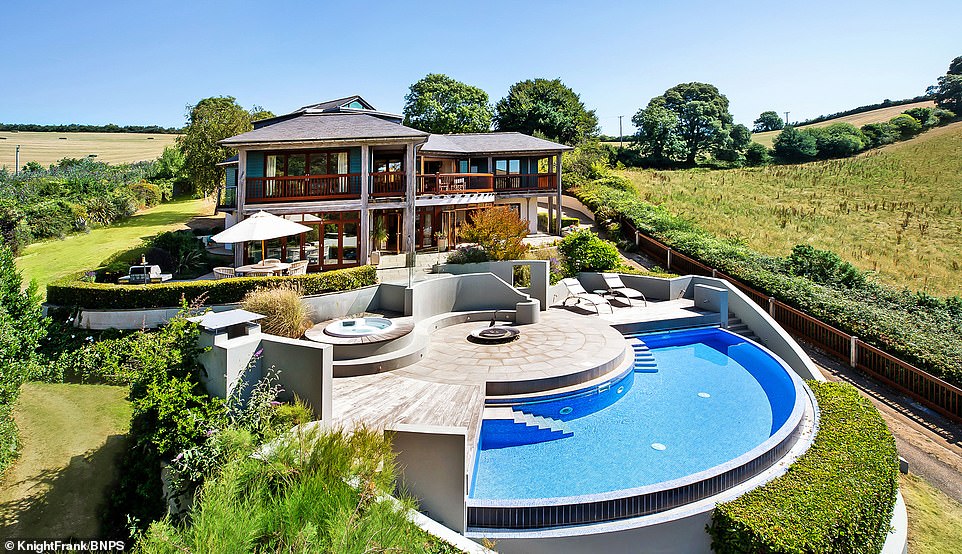 The swanky five-bedroom property, on the market with Knight Frank, also has a hot tub, an infinity pool and a helipad in the grounds

The clubhouse remained, becoming a family home, and was extensively remodelled in 2006 and won the overall prize in the Master Builder of the Year Awards.

The master bedroom is on the second floor and has the finest views in the house. It also has a decked roof terrace for taking in the idyllic surroundings.

Kingswear is situated on the banks of the River Dart in an area of outstanding natural beauty, surrounded by National Trust land, with the historic harbour town of Dartmouth on the opposite side of the river.

The house sits down a private road that runs above the river through National Trust woodland and is accessed through a pair of electric wooden gates.

Outside there are lawn gardens with a flagstone terrace that leads to an infinity swimming pool and hot tub.

There is also a helipad at the rear of the property. 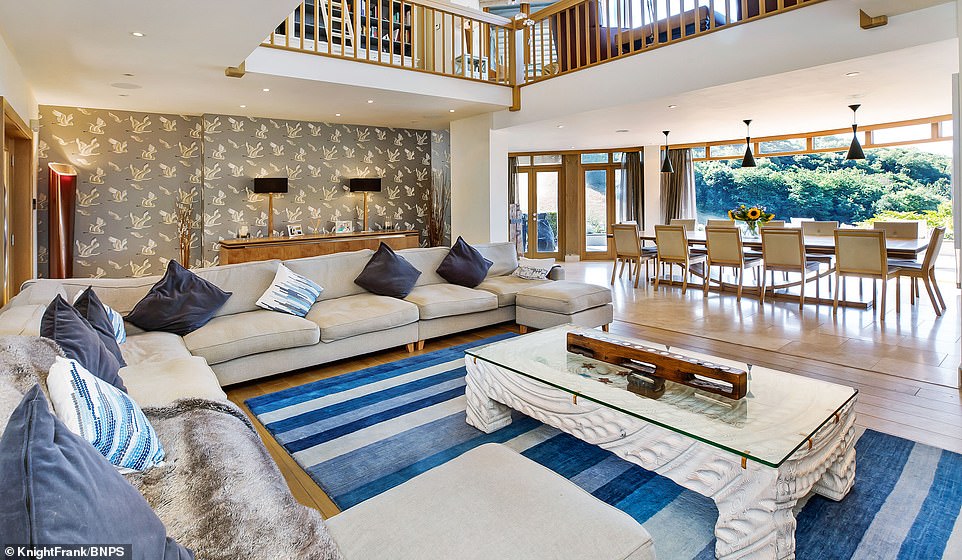 The home has five bedrooms but has an abundance of space, including this giant living room with an enormous sofa 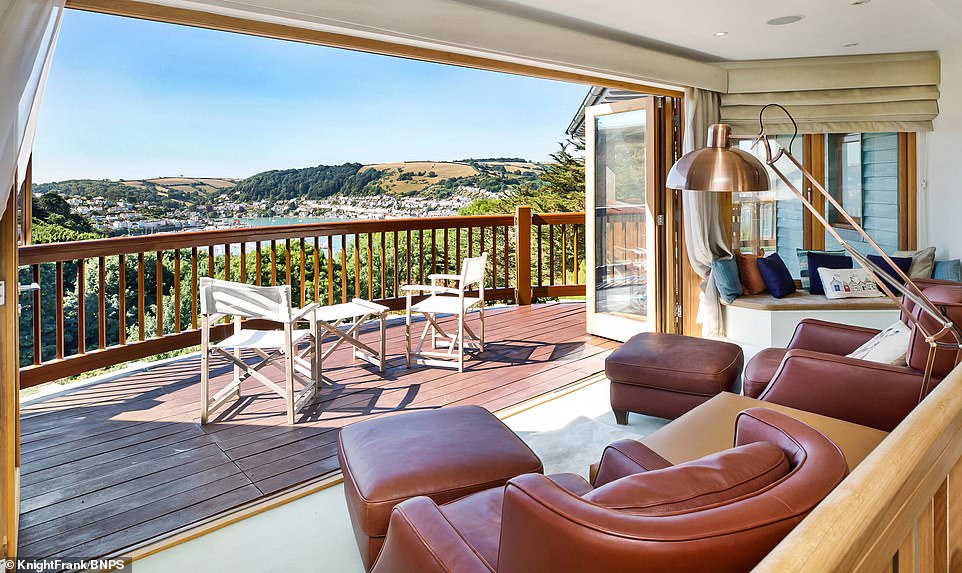 Balconies placed around the incredible house allow owners and guests to take in the scenery of Kingswear, Devon 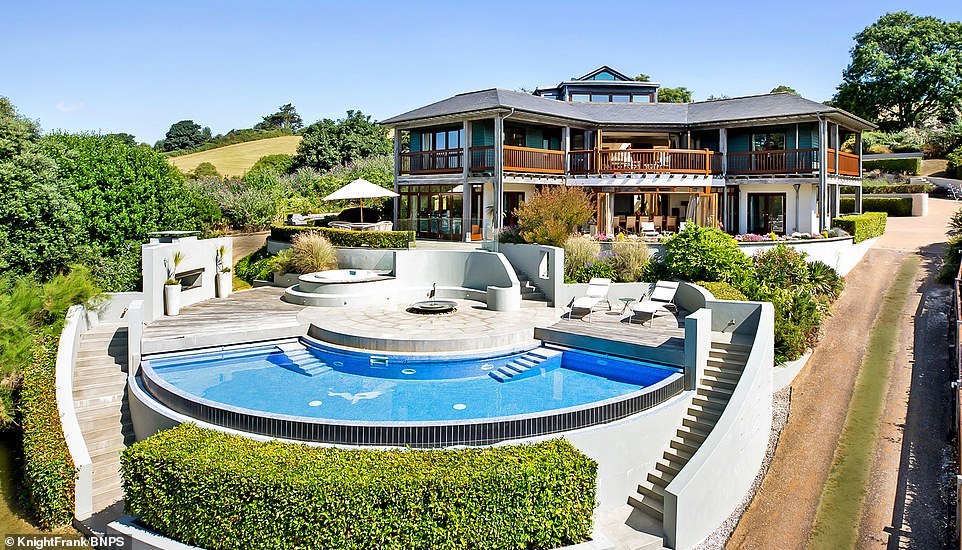 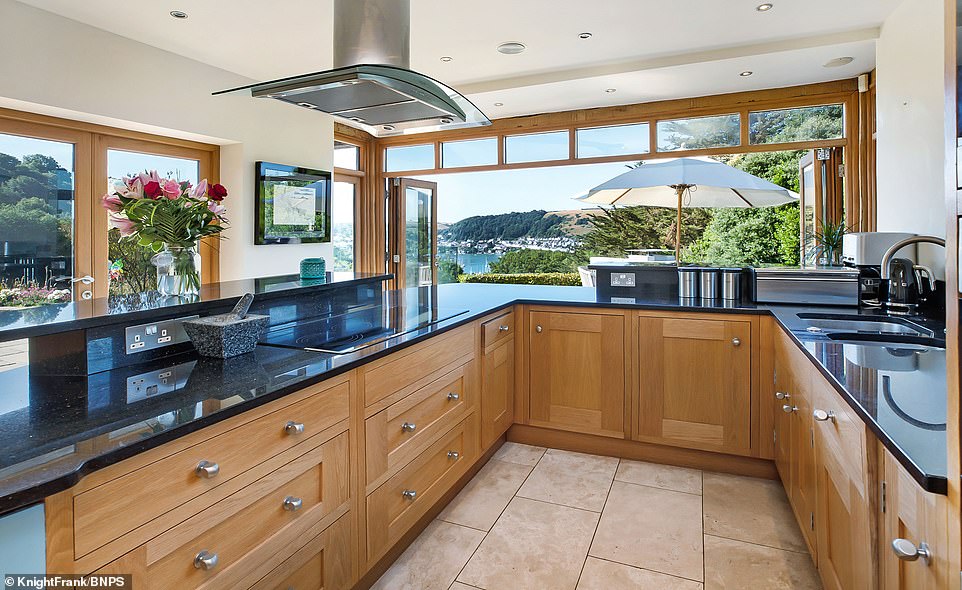 The house is arranged over three floors, constructed around a Carpenter Oak frame with under floor heating and Lutron lighting systems on all levels 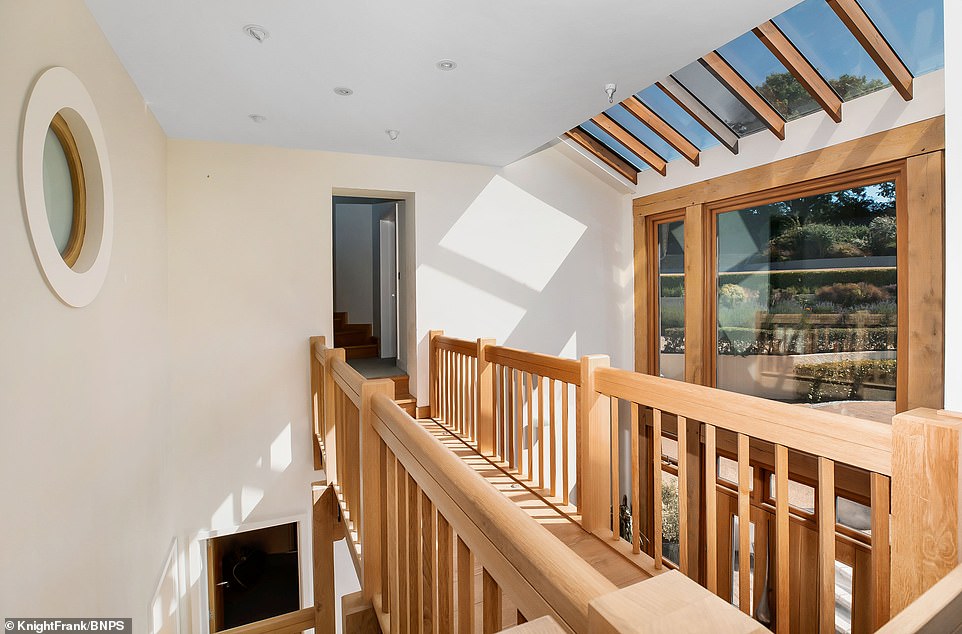 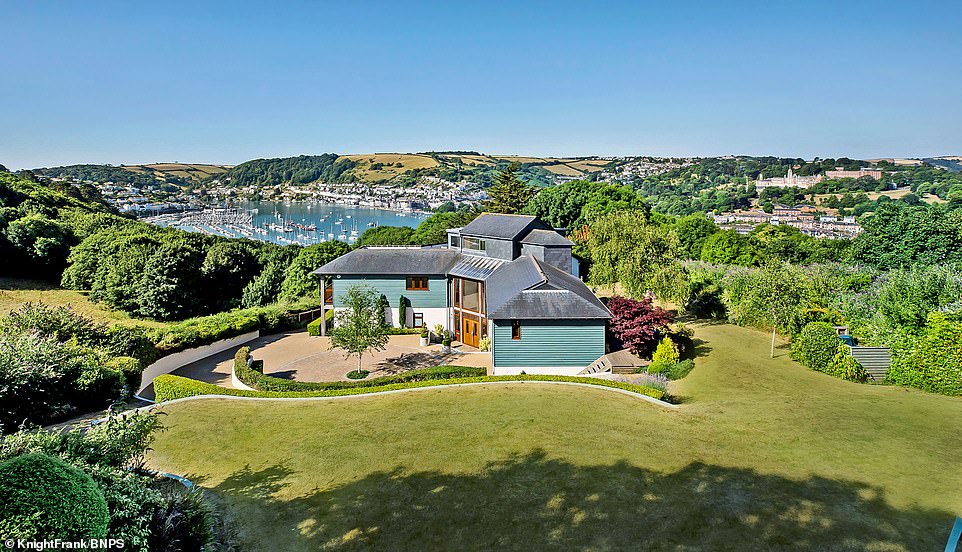 The Golf House in Kingswear, Devon, was originally built as the club house for a 1930’s course but it fell victim to the Government’s ‘Dig For Victory’ campaign of WW2

Bizarrely, estate agent Mark Proctor, from Knight Frank, is now in the unusual position of selling a house he grew up in.

He said: ‘I moved down here when I was three, my grandpa was a boat designer and my dad was an architect.

‘He bought the Golf House and always planned to convert it but never did and eventually we left.

‘For me it’s great to come back and see it after the conversion and see all that potential it had realised.

‘It’s a beautiful house. It was always a stunning position but now all the aspects of the house have been maximised to make the most of that special setting.

‘It was designed as a golf clubhouse but it’s a very functional family home and now it’s very luxurious too.

‘Kingswear is a very sought-after spot. The whole of the town faces south so it gets the sun throughout the day. It’s got magical gardens

‘Obviously the water is very much a feature, but you’ve also got direct access to woodland walks and countryside and you’ve got the River Dart for sailing.

‘It’s very tranquil so you don’t feel like you’re subject to all the tourists, yet you can be down in the town or at the water within minutes. 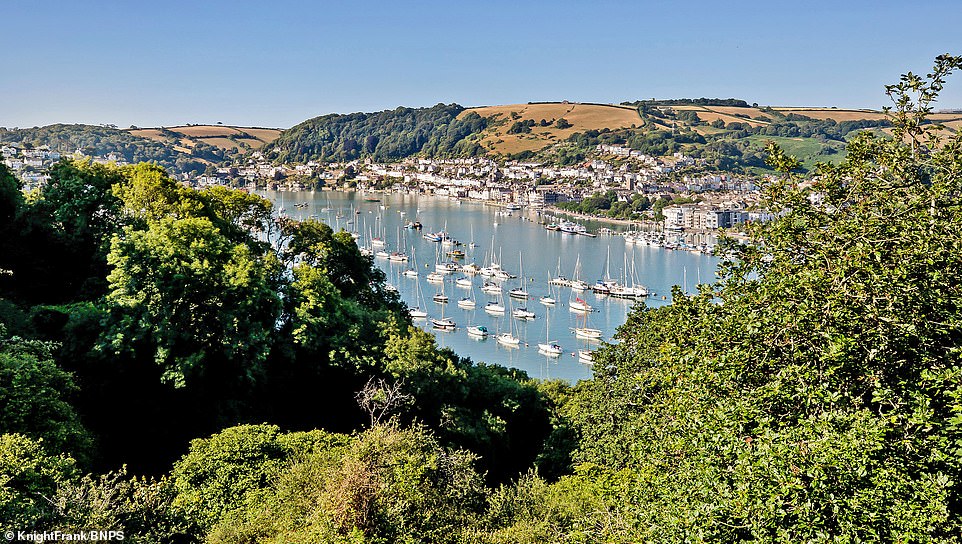 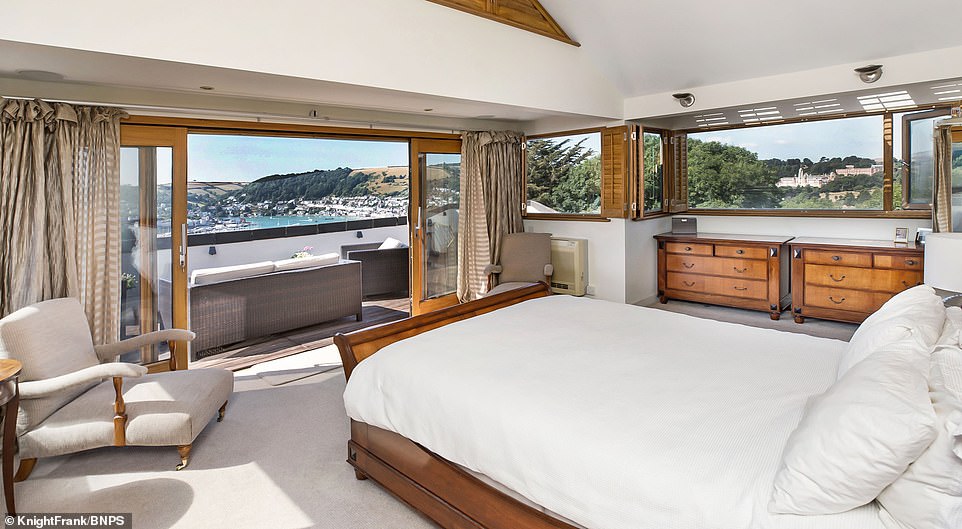 The master bedroom is accessed from the main gallery across a bridge and via a spiral oak staircase to the second floor where the finest views from the house can be enjoyed. Sliding doors lead to decked roof terrace and the en-suite bathroom has a free standing bath and separate shower 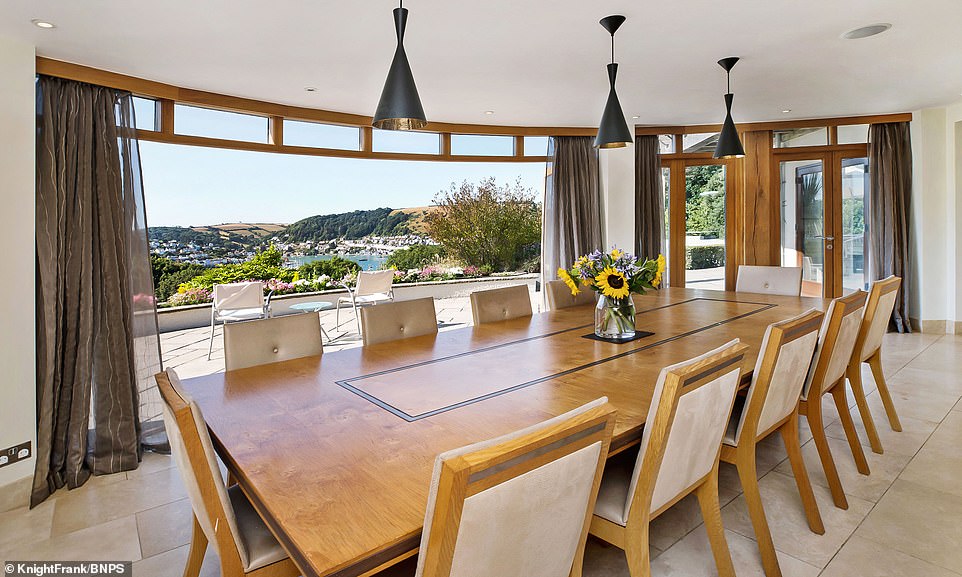 The property has been extensively remodelled and has been finished to an exceptional standard throughout, having previously been the winner of Master Builder of the Year Award 2006. 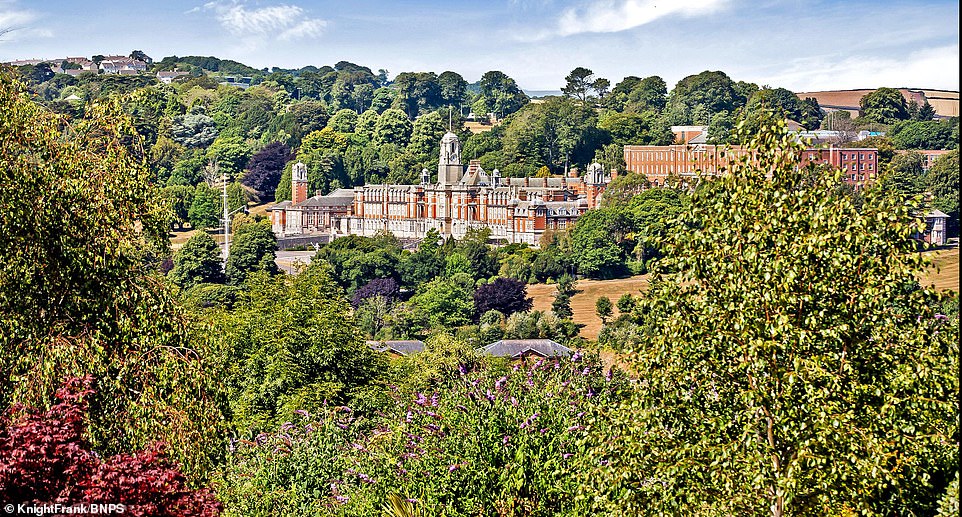 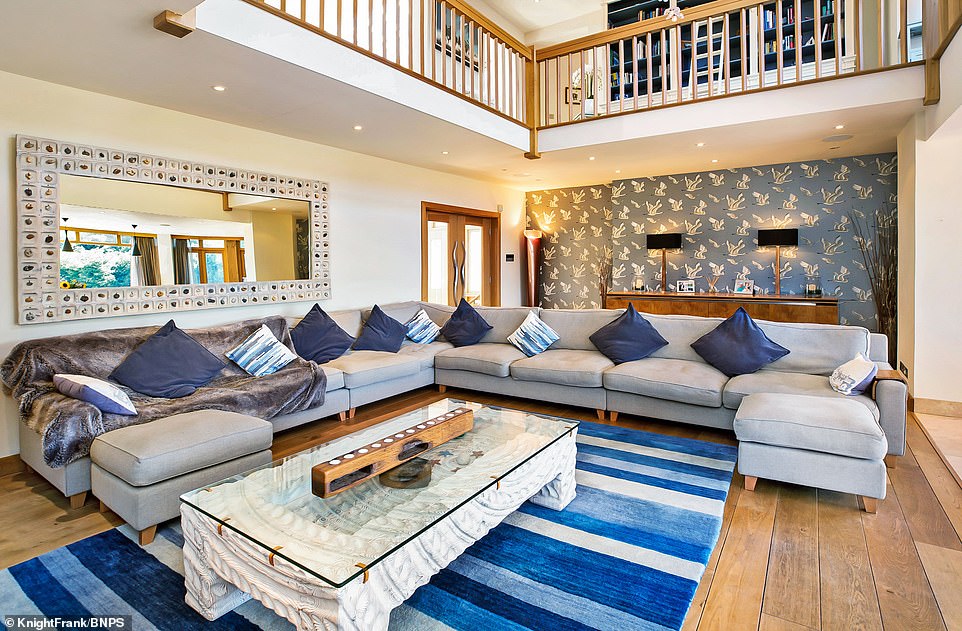 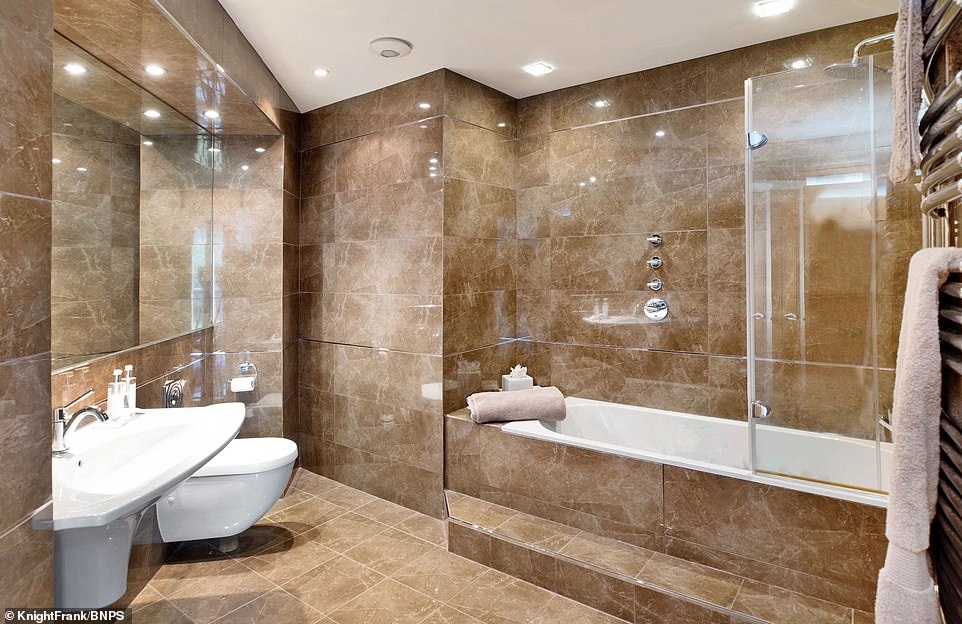 There are four further bedrooms, three guest suites which are accessed from the gallery landing and a further bedroom towards the rear of the house with dressing room and en-suite shower room. The main bathroom is made of brown marble and is 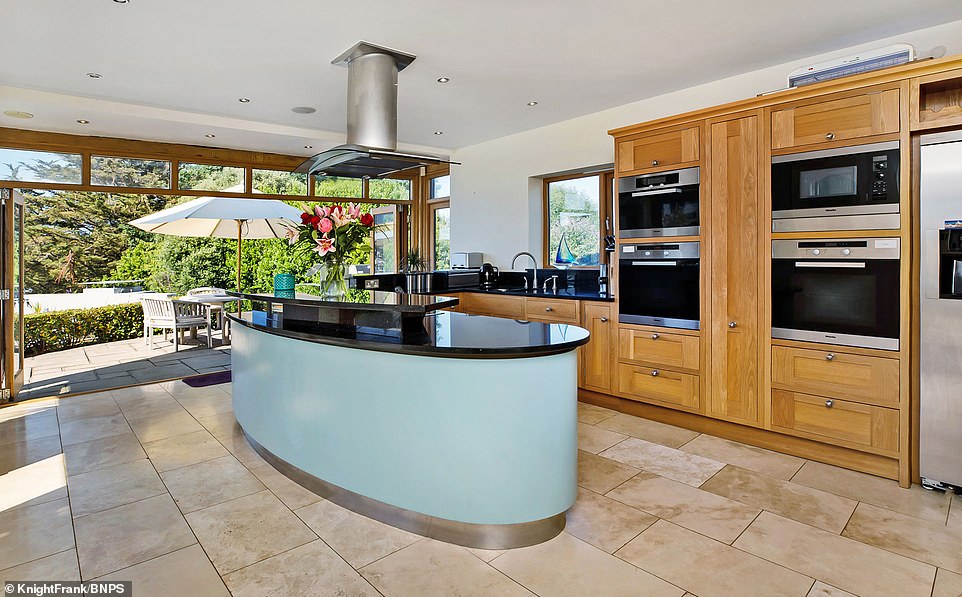 The drawing room flows seamlessly with the dining room, which is south facing and has seven full height, panoramic curved glazed double hardwood doors that fold back and open to the south facing flagstone terrace overlooking the infinity pool and to Kingswear, Dartmouth and the River Dart beyond 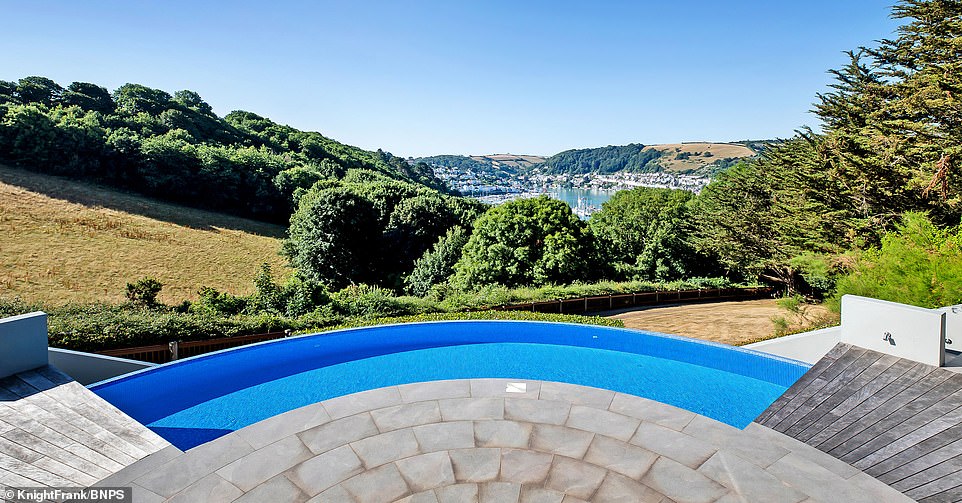 Immediately in front of the house there is a magnificent south facing terrace where an infinity pool and hot tub can be enjoyed. 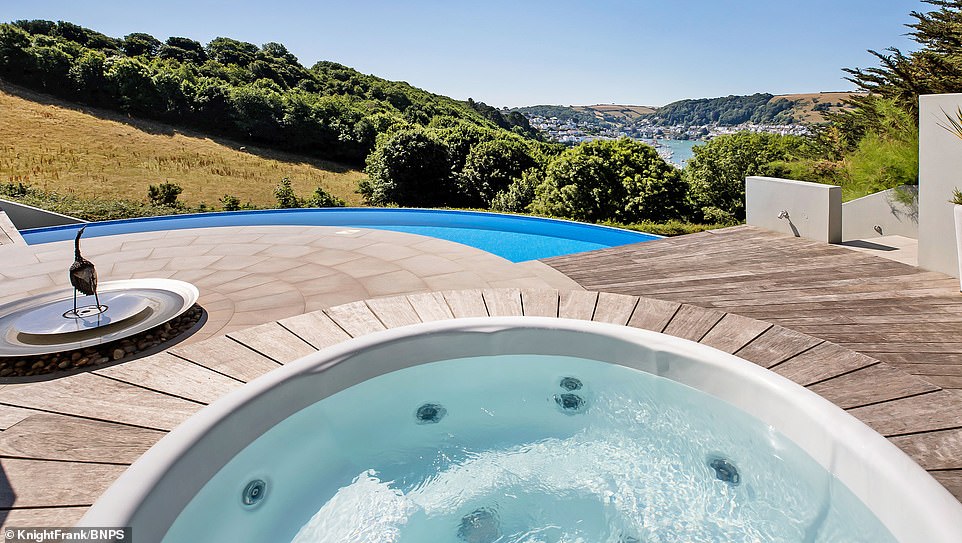