In a historic ruling, the Constitutional Court last week sentenced Zuma to prison for defying a court order that he should testify before a commission investigating allegations of rampant corruption when he was president from 2009 to 2018.

Police had earlier on Wednesday warned they were prepared to arrest the former president by a midnight deadline to enforce the court ruling, unless the top court instructed otherwise.

But minutes before the deadline, Zuma, 79, left his Nklandla home in a convoy of vehicles to an unnamed jail in his home province of KwaZulu-Natal (KZN). 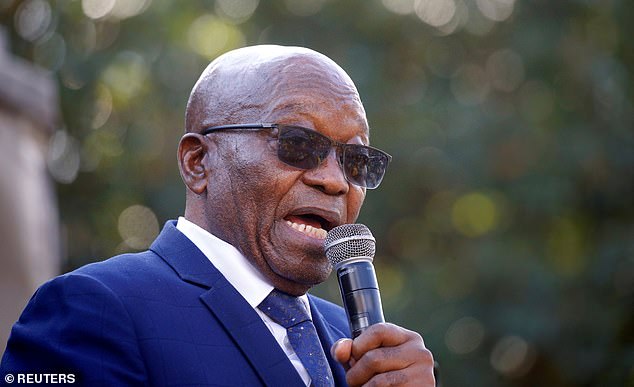 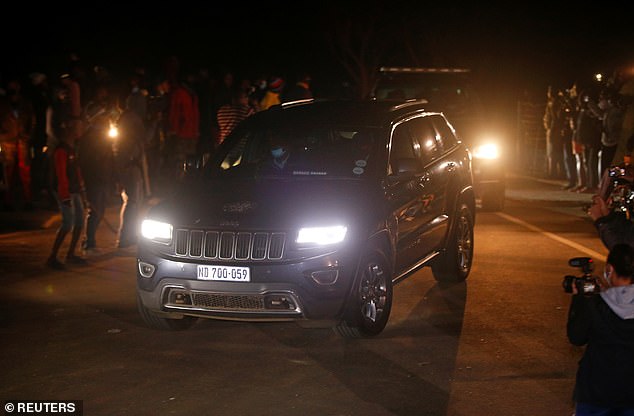 But minutes before the midnight deadline, Zuma, 79, left his Nklandla home in a convoy of vehicles to an unnamed jail in his home province of KwaZulu-Natal (KZN)

‘Please be advised that (ex) President Zuma has decided to comply with the incarceration order,’ the Zuma Foundation tweeted.

‘He is on his way to hand himself into a Correctional Services Facility in KZN (KwaZulu-Natal province),’ it said, just minutes before the deadline expired.

A convoy of cars believed to be carrying Zuma drove out of his homestead at high speed about 40 minutes before the cut-off time for him to give himself up.

Police ministry spokeswoman Lirandzu Themba confirmed in a tweet after midnight that the ex-president had been placed in custody.

Zuma’s daughter Dudu Zuma-Sambudla tweeted that he was ‘en route and he is still in high spirits’.

‘He said that he hopes they still have his same overalls from Robben Island… We salute dad!’ she wrote on Twitter.

Zuma’s decision to obey the Constitutional Court order comes after a week of rising tensions over his prison sentence. 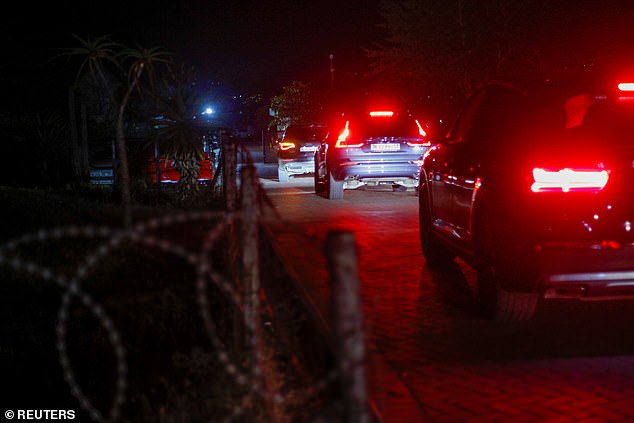 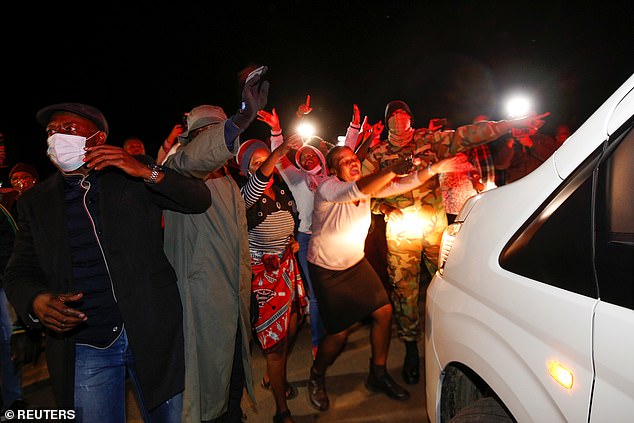 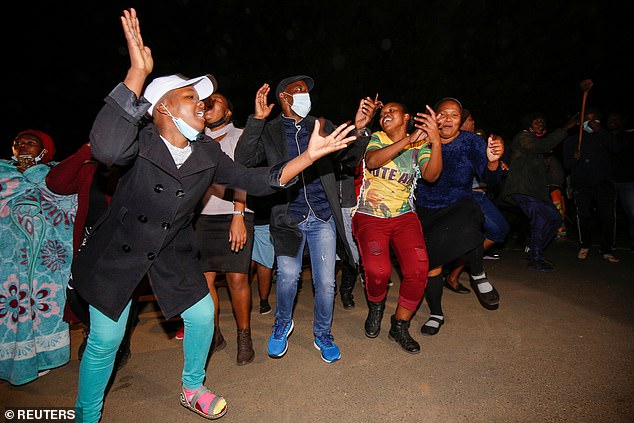 Zuma was sentenced to 15 months in prison for contempt because he defied a court order for him to testify before a judicial commission investigating widespread allegations of corruption during his time as the country’s president, from 2009 to 2018.

The Constitutional Court ordered that if Zuma did not voluntarily hand himself over to the police then the police should arrest the country’s former president by the end of the day Wednesday.

In a last-minute plea to avoid going to prison, Zuma’s lawyers had written to the acting chief justice requesting that his arrest be suspended until Friday, when a regional court is to rule on his application to postpone the arrest.

Zuma’s lawyers asked the acting chief justice to issue directives stopping the police from arresting him, claiming there would be a ‘prejudice to his life.’

They asked the court to ‘direct the suspension of its orders… to prevent our client from being arrested prior to all legal processes being finalised’.

He applied at the Constitutional Court for his sentence to be rescinded and that application will be heard on July 12.

On Tuesday, his lawyers were in the Pietermaritzburg High Court seeking to stop the minister of police from arresting him until the Constitutional Court rules on his application to have the sentence rescinded. The regional court will rule on that application on Friday.

Political tensions have risen in KwaZulu-Natal province as a result of Zuma’s conviction, sentence and pending arrest. Hundreds of his supporters gathered at his home over the weekend and vowed to prevent his arrest, but they left on Sunday. 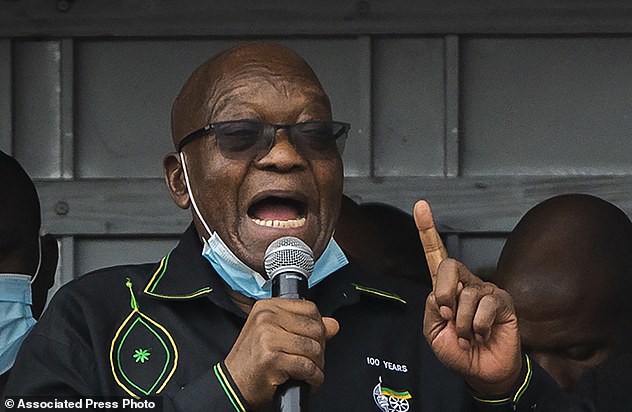 Addressing his supporters, Zuma reiterated that he is not afraid of being jailed since he had been imprisoned before, being incarcerated by the apartheid regime for 10 years on Robben Island. He is pictured above addressing supporters 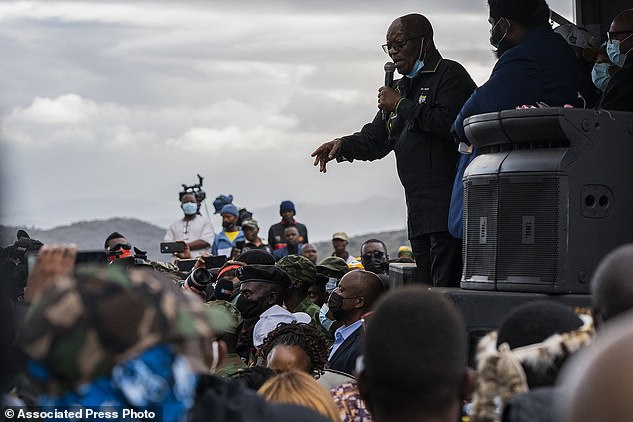 At the weekend he told his supporters that there would be chaos if police ‘dared’ arrest him.

Addressing his supporters, Zuma reiterated that he is not afraid of being jailed since he had been imprisoned before, being incarcerated by the apartheid regime for 10 years on Robben Island.

‘I am not afraid of going to jail. I went to prison fighting for freedom and rights and it looks like I will have to start from scratch and fight for freedom again,’ said Zuma in the Zulu language.

‘There is nobody who can come and take these rights away from me just because they think they understand the law. Those I fought for this freedom with would turn in their graves,’ said Zuma. 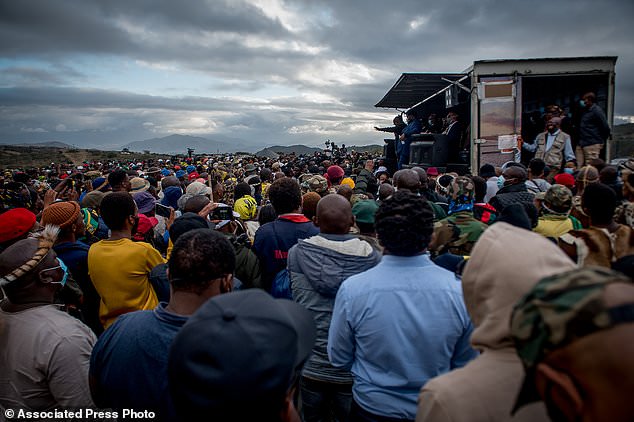 Zuma was forced out of office in 2018 and replaced by Cyril Ramaphosa after a nine-year tenure stained by corruption scandals and the taint of cronyism.

Critics nicknamed him the ‘Teflon president’ for his perceived ability to sidestep justice.

The judicial inquiry into corruption during his term as president has heard damning testimony from former Cabinet ministers and top executives of state-owned corporations that Zuma allowed his associates, members of the Gupta family, to influence his Cabinet appointments and lucrative contracts.

Zuma refused to comply with a court order to appear before the commission, which led the Constitutional Court to convict him of contempt on June 29 and sentence him to prison

Despite his tarnished reputation, the former president carries substantial weight among officials and grassroots members of the ruling African National Congress (ANC).

The former herdboy was the ANC’s intelligence chief during the armed struggle against apartheid and spent 10 years in jail on notorious Robben Island.

Despite its internal tensions, the ANC said it would not interfere with the judiciary processes enveloping Zuma.

Party spokesman Pule Made told reporters earlier that ‘we respect the independence of the judiciary’.

In a separate matter, Zuma is standing trial on charges of corruption related to a 1999 arms deal, where he allegedly received bribes from French arms manufacturer Thales.

He faces 16 charges of fraud, graft and racketeering relating to a 1999 purchase of fighter jets, patrol boats and military gear from five European arms firms for 30 billion rand, then the equivalent of nearly $5 billion.

His financial adviser has already been convicted and imprisoned in that case.

April 12, 1942: Zuma is born in rural Nkandla in KwaZulu-Natal province. He grows up without formal schooling.

1963: A member of the armed wing of the ANC, he is convicted of trying to overthrow the apartheid government and serves 10 years on the Robben Island prison alongside Nelson Mandela.

1973: Freed, he sets up underground ANC networks and then is the group’s chief of intelligence from Zambia.

1990: After 15 years mostly spent in exile, he returns to South Africa when the ANC is unbanned. He is key in talks that lead to a national unity government after the first all-race elections, in 1994, won by the ANC. 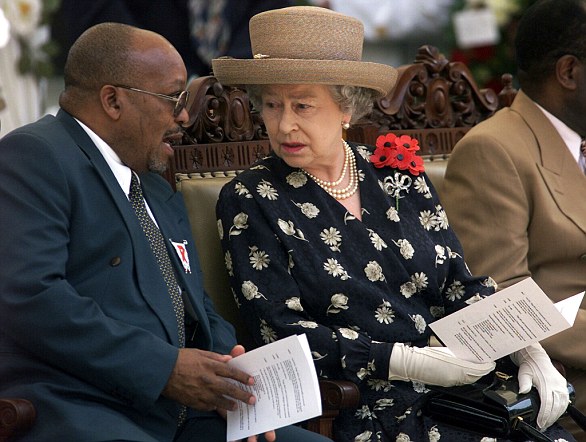 Jacob Zuma is pictured meeting the Queen in a wreath-laying ceremony in Durban in 1999, when he was deputy president

1997: He becomes the ANC’s vice president. Two years later he is elected deputy president of the country.

2006: He is cleared of rape charges but ridiculed for testifying he took a shower after consensual sex with his HIV-positive accuser.

2009: Two years after ousting Thabo Mbeki as ANC leader, he is elected president. He is re-elected in 2014. 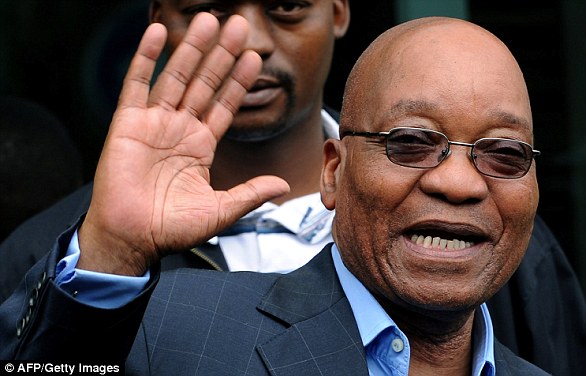 2016: A top court finds he flouted the constitution by using public funds to upgrade his private residence. An anti-corruption watchdog meanwhile charges he allowed a wealthy Indian business family, the Guptas, undue influence over his government.

December 2017: He is replaced as ANC chief by his deputy, Cyril Ramaphosa, and comes under pressure to quit the presidency early, ahead of the next elections.

February 14, 2018: Resigns from the presidency after the ANC threatens a no-confidence vote in parliament.