Washington: A federal judge on Friday sent Paul Manafort to jail pending trial after he was charged with witness tampering, in the latest episode in a slow fall from grace for a man who was President Donald Trump's campaign chairman in 2016.

Manafort, a longtime political operator and businessman, has been a focus of Special Counsel Robert Mueller's investigation into Russia's role in the 2016 US presidential election.

Manafort has been indicted in both Washington and Virginia on a series of mostly financial-related charges, including conspiring to launder money and defraud the United States.

He had been on home confinement in Alexandria, Virginia, and had been required to wear an electronic monitoring device. But last week Mueller charged him in a new indictment with witness tampering.

Manafort pleaded not guilty to that charge on Friday but US District Judge Amy Berman Jackson in Washington revoked his bail, sending him to jail.

“I have no appetite for this," she said. "But in the end, I cannot turn a blind eye.

"You’ve abused the trust placed in you," she added later. 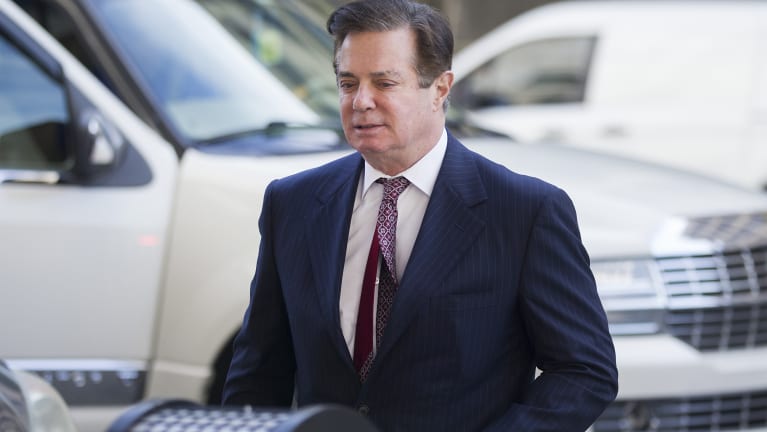 Manafort turned around briefly to wave to his wife in the front row before heading out a door at the back of the courtroom, court witnesses said.

In a bizarre tweet soon after the court proceedings, Trump noted the "tough sentence for Paul Manafort" – despite the fact Manafort has not been sentenced. He again attempted to distance himself from Manafort.

Mueller, whose investigation has overshadowed Trump's presidency, is investigating whether the President's 2016 campaign colluded with Moscow and whether Trump has unlawfully sought to obstruct the Russia probe. Trump has called Mueller's investigation a witch hunt and has denied wrongdoing.

Legal experts have said Mueller wants to keep applying pressure on Manafort to plead guilty and assist prosecutors with the probe.

Manafort chaired the Trump campaign for just two months before resigning in August 2016 following a news report he had received possibly illegal payments from the political party of Ukraine's former, pro-Russian president.

Jackson had previously rebuffed Manafort's repeated requests to end his home confinement in exchange for pledging $US10 million ($13.4 million) in real estate as collateral.

His trial in the Washington case is scheduled for September. 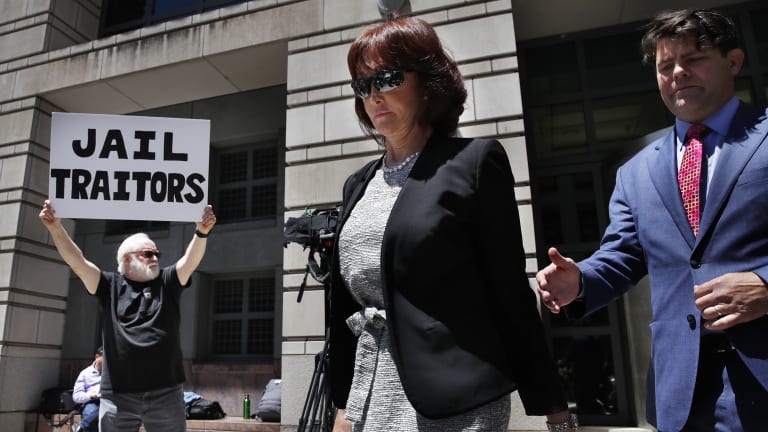 Paul Manafort’s wife, Kathleen, is escourted out of court after her husband’s bail was revoked.

Manafort's trial on the related charges in Virginia is set for July 25. He has pleaded not guilty to all charges.

A June 8 indictment charged Manafort and Konstantin Kilimnik, a Manafort aide and political operative with alleged ties to Russian intelligence, with tampering with witnesses about their past lobbying for Ukraine's former pro-Russian government.

The indictment accused Manafort and Kilimnik of attempting to call, text and send encrypted messages in February to two people from a political discussion group – the so-called Hapsburg Group – that Manafort worked with to promote Ukraine's interests in a bid to sway their testimony.

Manafort has long-standing ties to a pro-Russian political party in Ukraine and a Russian oligarch close to the Kremlin.

In addition to conspiracy to launder money and defraud the United States, the charges against Manafort in Washington include failing to register as a foreign agent for the pro-Russia Ukrainian government under former President Viktor Yanukovych.

None of the charges against him make reference to alleged Russian interference in the election nor the accusations of collusion between Moscow and Trump’s campaign. The Kremlin has denied meddling in the election.