France gives all 18-year-olds cash to spend on culture, even video games

Paris: France rolled out a new nationwide “culture pass” offering €300 ($472) for 18-year-olds to spend on anything from books to computer games after a trial run in 14 areas proved a hit.

Some 800,000 teenagers a year can now look forward to downloading an app offering them credits to pay for cinema, museum and theatre tickets, as well as books, art materials, dance classes, musical instruments or an online subscription.

After heated debate, the pass also allows over-18s to pay for video games but these will not reportedly be on offer in an upcoming culture pass for secondary school and lycée students. 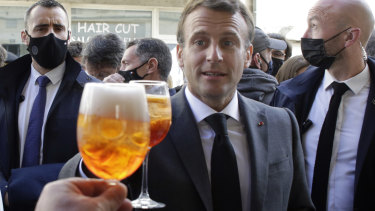 French President Emmanuel Macron, right, and Nevers mayor Denis Thuriot, left, drink with shopkeepers during a visit to mark the reopening of cultural activities after closures during the COVID-19 pandemic, in Nevers, central France.Credit:AP

Fear that all the money would go on these was assuaged after trials showed that 60 per cent of the money went on books, with music on 12 per cent and cinema and videos taking up 10 per cent.

Under the two-year test period in 14 French departments, reports say that of the 164,000 who signed up for the culture pass, three-quarters used it at least once.

French cultural patriotism oblige, while the money can also be used to subscribe to digital platforms, these have to be French.

In other words, Netflix, Amazon and Disney+ are out, but French sites such as Canal Plus, Salto and OCS are in. The same applies to music apps, meaning Spotify is out but Deezer is fine.

Books and other items must be bought in person and not delivered by online suppliers.

While the pass is not linked to recovery from the COVID pandemic, it will help kickstart the embattled sector, which reopened this week after six months under lockdown. 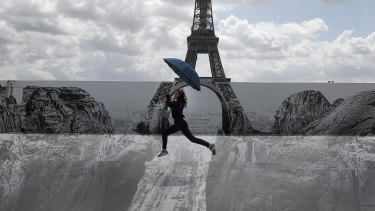 Culture in the air: a woman jumps in front of the Eiffel Tower where an exhibit has been installed. French President Emmanuel Macron is offering cash to stimulate young people’s consumption of art, music, and even video games.Credit:AP

President Emmanuel Macron announced the new pass, which was a 2017 presidential campaign pledge, in a 30-second TikTok and Instagram video.

In it, the 42-year old president said: “Whether you’re into film, museums, novels, manga, video games, rap, metal, all of the above, we have created the culture pass for you.”

“To take advantage of it, go to the ‘culture pass’ app. The ball’s in your court!”

Once they register, 18-year-olds will have two years to spend the money.

The app requires GPS and lists a variety of exhibitions, concerts and other cultural events in your local area.

Some political opponents saw it as a ploy to attract new voters in next year’s presidential election in which Macron is polling to face off again with far-right candidate Marine Le Pen.