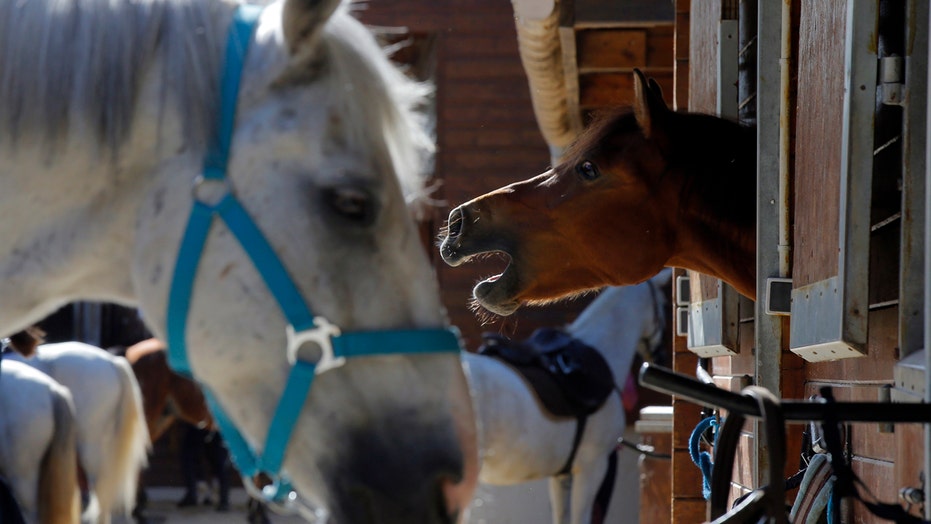 A spate of gruesome killings of horses and ponies across pastures in France has left police baffled and rural communities terrified as the mysterious slayings appear to only be growing.

Up to 30 attacks have been reported in pastures across the country since February, the most recent taking place on Thursday in the Saone-et-Loire region, in east-central France.

“All means are in motion to end this terror,” Agriculture Minister Julien Denormandie tweeted Friday.

Denormandie, who visited the region on Friday, told France-Info that authorities are "excluding nothing" in the brutal attacks.

“Ears are cut off, eyes removed, an animal is emptied of its blood …,” he said,  describing the morbid fates befalling one of France's most beloved animals.

In many of the attacks, an ear — usually the right one — has been cut off, recalling the matador’s trophy in a bullring.

No meat is taken from the carcasses, and some of the animals have had their genitals cut away.

This is absolutely barbaric,” a local official told Reuters earlier this month after an attack in Cortambert, a village in the Saone-et-Loire region. 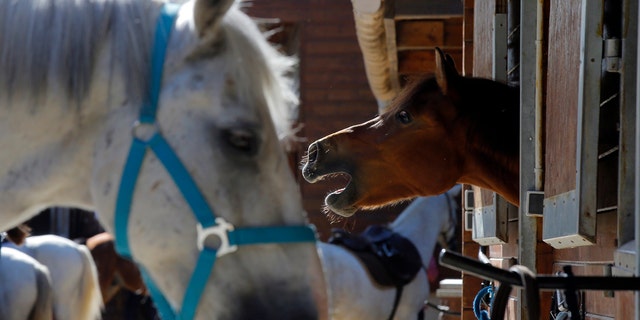 A horse neighs as he stands in a box at a equestrian club in Les Yvelines, French department west of Paris, Friday, Aug. 28, 2020. Police are stymied by dozens of attacks across the country this year.
(AP Photo/Michel Euler))

The attacks have taken place all across the country, from the mountainous Jura region in the east to the Atlantic coast, many this summer, according to Denormandie.

After the first solid sighting of an attacker, law enforcement officers in Auxerre, in Burgundy, released a composite sketch last week based on a description by a man who wrangled with two attackers at his animal refuge in a village in the Bourgogne-Franche-Comte region.

Nicolas Demajean, who runs the refuge, Ranch of Hope, faced the two attackers last Monday after he was alerted by his squealing pigs.

He sustained an arm injury during a struggle with one of the attackers who had a knife, as the other slashed the sides of two ponies, now recovering but “traumatized,” he said.

“I used to have confidence putting my horses out to pasture. Today, I have fear in my gut,” Demajean said Thursday on regional TV station France 3. 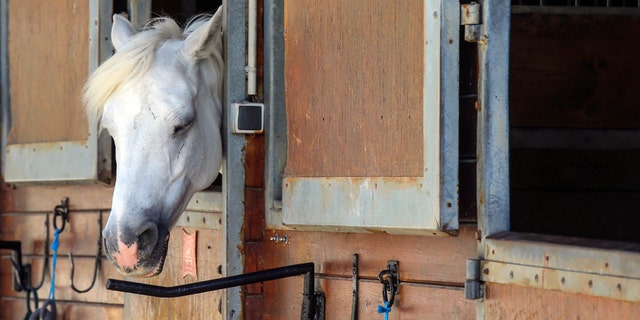 A horse stands in a box at a equestrian club in Les Yvelines, French department west of Paris, Friday, Aug. 28, 2020.
(AP Photo/Michel Euler)

The following day, a young pony was targeted in the Saone-et-Loire region.

A donkey who reportedly participated in past Christmas markets in Paris was killed in a gruesome attack in June.

Many now in France are speculating whether the mutilations are a morbid rite of an unknown cult, a chilling “challenge” relayed by social media or copycat acts. Speculation is widespread as to how the barbaric acts, some surgical, could be perpetrated without a solid knowledge of equine anatomy or on a horse in a pasture presumably able to flee.

"We do not understand the motivation," a police spokeswoman in Paris told Reuters. "Is it a satanic rite, insurance fraud, some macabre trophy hunt, or an Internet challenge? We don't know. It is very traumatizing."

The mutilation of horses is neither a French phenomenon nor is it new. In the 1980s and 1990s, hundreds of horses in Britain, then in Germany, were mutilated. There were also cases in France between 2014 and 2016, according to Reuters.

The high number in a short period of time, including that all types of horses have fallen victim, has spurred the attention of authorities.

The president of the French Federation of Equitation offered on Friday to help police investigating the scattered cases, but France's horse world is now in fear over what each new day may bring.

"We're all afraid," Veronique Dupin, an official of a riding club in the Yvelines region west of Paris, told the Associated Press.

UN warns 2021 shaping up to be a humanitarian catastrophe