Six French firemen from the ‘Heroes of Notre Dame’ brigade have been accused of gang-raping a tourist at a Paris fire station.

The victim in the horrific case is a 20-year-old Scandinavian student, who cannot be named for legal reasons.

She claims she agreed to sex after meeting an off-duty fireman in a bar last Friday, but was then attacked by his colleagues at their quarters in south Paris. 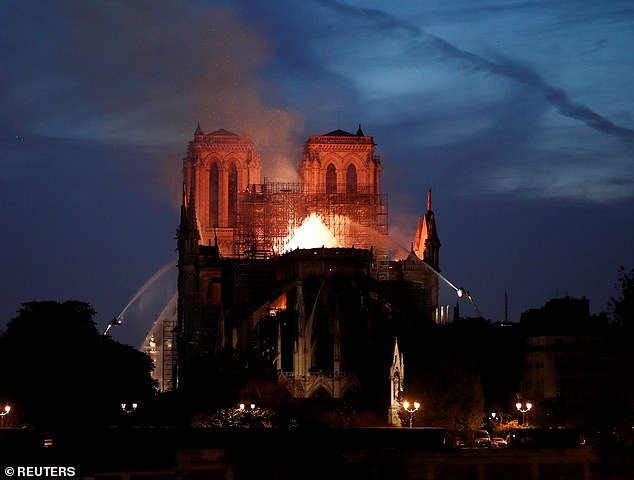 Firefighters use hoses to try to dampen down the raging flames as they engulf the roof of the cathedral. Six firefighters hailed the ‘Heroes of Notre Dame’ have been accused of gang-rape a tourist in Paris

It comes after all members of the Paris Fire Brigade were hailed as ‘heroes’ for saving Notre Dame Cathedral from complete destruction in a horrific blaze on April 15.

President Emmanuel Macron invited 500 of them to the Elysee Palace and, announcing they would receive gold medals, said: ‘The country and the entire world were watching us and you were exemplary.’

The source close to the rape enquiry said: ‘The complainant reported being attacked by a number of men last Friday. 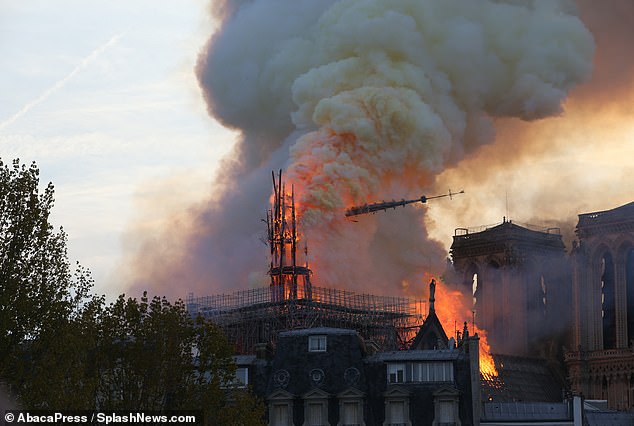 The alleged incident occurred last Friday in the south of the city. Picture shows the spire of the cathedral collapsing

‘She had met an officer in a bar, and agreed to sex with him, and he is not a suspect. He bought the woman back to his fire station and that is where the multiple attacks took place.’

The crimes are said to have taken place at the Plaisance fire station, which is less than three miles from Notre Dame.

Paris firefighters are all in the military, meaning they stay in barrack-style quarters, complete with individual bedrooms, as well as dormitories. 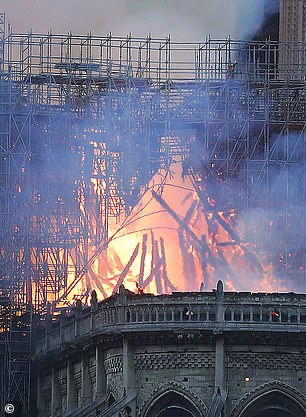 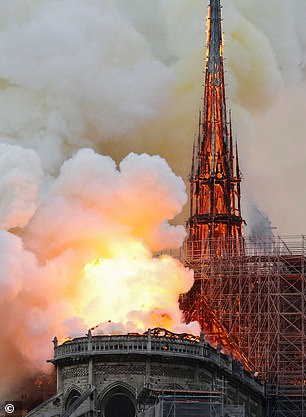 President Emmanuel Macron invited 500 of the firefighters to the Elysee Palace and announced they would receive gold medals. The turret falls through slightly before 8pm (left), leaving behind a few timber beams. Shown right, nothing remains of the turret by 8.10pm

The room where the attack is said to have taken place is currently being viewed as a crime scene, with forensics officers carrying out tests.

The six suspects – who have not been named – are aged between 25 and 35, and face charges ranging between rape and ‘failing to report a crime,’ said the Paris source.

‘They were said to have been drinking heavily at the time of the attack, which took place early on Saturday morning,’ he added.

‘Other women visitors were in the station too. The victim was found in a state of considerable shock, and reported her ordeal to prosecutors.’

All the men were arrested over the weekend, and on Monday presented to a Paris judge, who has launched a criminal enquiry.

The defendants have denied the allegations.

Rape is punishable by up to 15 years in prison in France, and this can go up to 20 years if there are aggravating circumstances, such as a mob attack.

Gabriel Plus, a spokesman for the Paris Fire Brigade, said all the suspects had been suspended from duty.

He said the allegations were ‘against the values upheld by Paris firefighters who must be exemplary.’

In January, two Paris policemen were sent to prison for seven years for raping a tourist from Canada in a room at their headquarters next door to Notre Dame Cathedral.