Fishing nets released and trailing along behind, this French vessel is so close to the UK you can see British soil in the background.

The fishermen were caught on camera just six nautical miles from Cornish shorelines – twice as close as they are supposed to get under EU regulations.

They were likely attempting to catch sea bass, haddock or mackerel.

EU rules allow the French to work up to 12 nautical miles off the UK coast. Older boats can use a special clause – known as Grandfather Rights – to move within six. 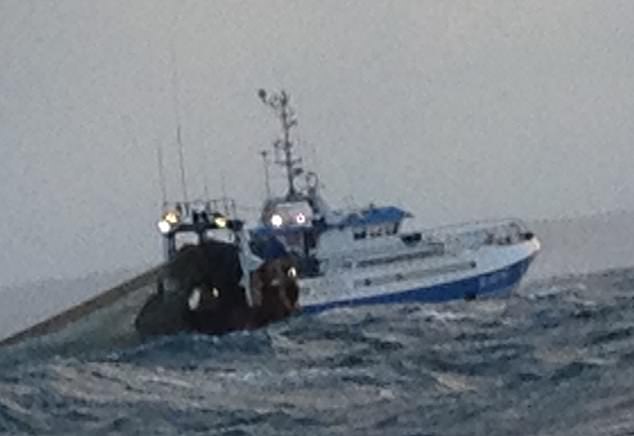 This photograph, taken six nautical miles from land in January last year, which clearly shows a boat towing nets to trap fish. The Cornish coast can even be seen in the background

The warning comes amid rising tensions between British and French fishermen, with access to UK waters set to be a crucial battleground in Brexit negotiations. It follows summer’s ‘scallop war’, which led to violent clashes at sea.

Last weekend up to 20 boats were spotted sitting off the Cornish coast, in what one expert described as the ‘biggest ever invasion’. Fishermen say the influx was likely down to bad weather – meaning British boats remained in dock, unable to confront them.

Westerly winds gave the French boats perfect cover to claim they were simply seeking shelter. But skippers who have spent their lives working the area say the phenomenon is nothing new. 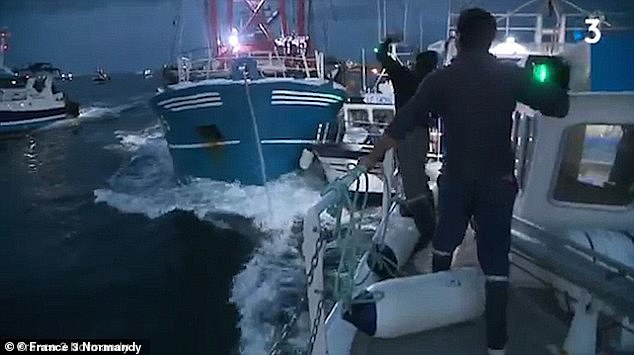 The aggressive angling has led to further Anglo-French water tensions which could lead to a repeat of scenes (pictured) earlier this year. That clash saw violent clashes which led to flares and rocks being thrown on board trawlers

One produced this photograph, taken six nautical miles from land in January last year, which clearly shows a boat towing nets to trap fish. Official records show the 22.5m-long vessel, Erispoe, was built in the year 2000.

This would mean it is not entitled to Grandfather Rights, which allow foreign vessels to access other countries’ coastal waters if they had historically done so before the Common Fishery Policy was introduced in 1970.

It is therefore not entitled to come closer than 12 nautical miles off UK land – but Erispoe has continued to do just that, and was one of the boats spotted around six miles from the Cornish coast on Sunday.

It was not alone, with around eight other boats fishing at the same time. Among them was Lazalai, a 25m trawler, which was built in 2010.

It was joined by Scuderia, built in 2013; Daytona, built in 2001; and Cezembre, built in 1984. Fishermen fear the boats are plundering stocks of mackerel, haddock and sea bass. 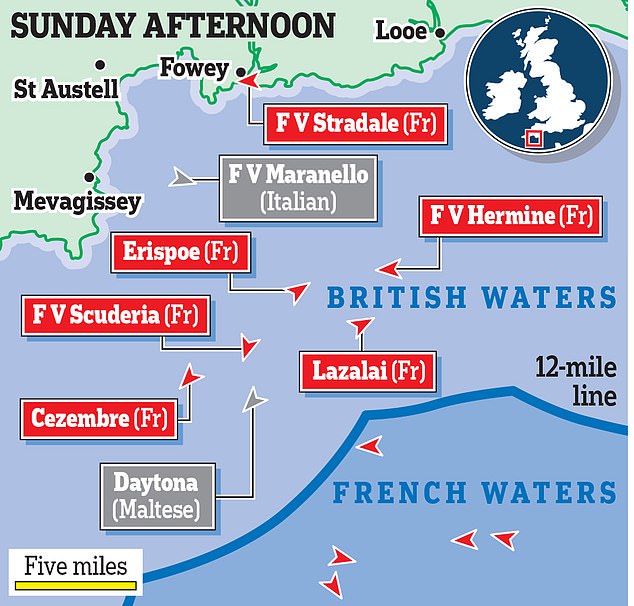 Last weekend up to 20 boats were spotted sitting off the Cornish coast, in what one expert described as the ‘biggest ever invasion’ 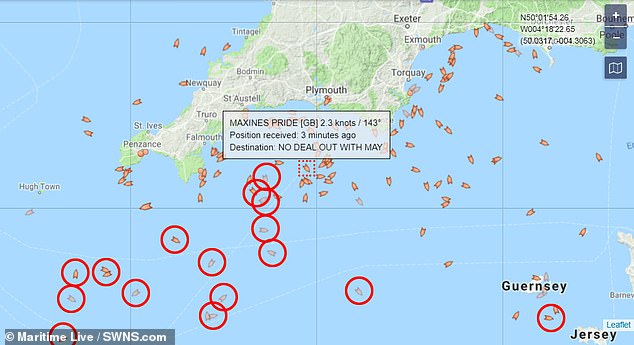 Captured earlier this week on Monday, this chart shows the fishing wars have erupted off the coast of Cornwall following the ‘biggest ever invasion’ of French trawlers in British waters

Angus Bateson, 62, from Looe, said: ‘The biggest problem here is that no one is policing things around here. The French are just pulling up here and putting their nets down. Now there’s not enough fish there for us.’

Dave Bond, 60, skipper of Mystique II, added: ‘They’re pushing it. They shouldn’t be that far in.’

Tensions have been simmering for months, with footage showing fishermen ramming into each others’ boats during a war over scallops in August.

Currently the UK is part of the London Fisheries Convention, which was signed in 1964.

It allows vessels from five European countries (France, Belgium, Germany, Ireland and the Netherlands) to fish within six miles (12 nautical miles) of the UK’s coastline.

The agreement sits alongside the EU Common Fisheries Policy, allowing European vessels access between 12 and 200 nautical miles of the UK.

As part of the EU withdrawal the UK will also no longer have to abide by the Common Fisheries Policy.

As has already been announced, new rules on fishing will come via a Fisheries Bill to control access to UK waters and set quotas.

Michael Gove previously said: ‘Leaving the London Fisheries Convention is an important moment as we take back control of our fishing policy. It means for the first time in more than 50 years we will be able to decide who can access our waters.

‘This is an historic first step towards building a new domestic fishing policy as we leave the European Union – one which leads to a more competitive, profitable and sustainable industry for the whole of the UK.’

Barrie Deas, chief executive of the National Federation of Fishermen’s Organisations, said: ‘This is welcome news and an important part of establishing the UK as an independent coastal state with sovereignty over its own exclusive economic zone.’

Britons had been accused of ‘looting’ scallops in the Bay of Seine, in Northern France.

British fishermen can collect them all year round, but the French are restricted by local law to a scallop season of October 1 to May 15.

In September, French trawlers were accused of being behind hundreds of thousands of pounds’ worth of damage to Cornish fishing gear.

The French were also accused of double standards that same month when they were caught taking thousands of pounds of bluefin tuna. The UK has no EU quota to catch the fish, but France does – so its boats are effectively given free rein in British waters.

A spokesman for France’s agricultural ministry said: ‘All alleged infringements of EU laws are investigated as appropriate.

History of the ‘Scallop Wars’

Britain’s scallop fishing industry is worth around £120million a year and supports more than 1,200 jobs.

But under EU law, the British are not allowed to fish within 12 miles of the French coast.

UK fishermen can dredge for scallops in the 40-mile stretch of international water known as the Bay of Seine – while the French have access from November to February.

Fierce competition between the nations has been simmering since the long-running dispute blew up in 2012 in an incident in which French fishermen attempted to ram British boats.

The dispute was nicknamed the ‘Guerre de la Coquille’ when again British and French fishermen clashed this time off the coast of Le Havre, France.

French fishermen believe that British fishermen were coming within France’s twelve-mile zone inside the Bay of Seine to dredge for scallops.

The situation was worsened by the fact that the French fishermen were banned from fishing for scallops over the summer months as a measure to allow stocks to spawn and regenerate.

But British fishermen were allowed to dredge scallops all year round, although they only had a limited numbers of day to access the best fishing grounds.

They rammed British boats, pelted them with iron bars and rocks and attempted to snag their propellers with rope.

Protests have seen Norman fishermen overturn trays of scallops in supermarkets and hurl fish in front of shoppers and they have even set fire to live lambs.